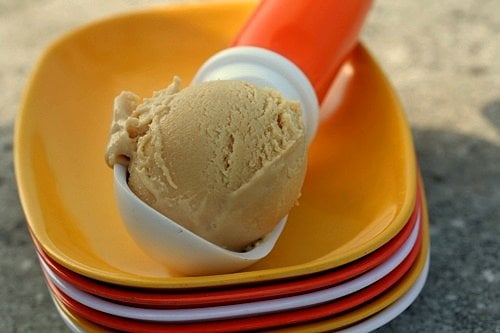 When I gave the terrific recipe for the Caramelized White Chocolate, which I learned to make at Valrhona’s chocolate school, I’d hoped that many of you would use it to create your own concoctions. While no one came up with my favorite (stirred into oatmeal!), there was a lot of creativity put forth as people made everything from Caramelized White Chocolate Bars to a spread for a buttery, flaky croissant.

I’ve listed the ones I found at the end of the post, but I wanted to give the ice cream recipe I’ve been making this summer.

It’s very simple to make and the payoff is that the caramelized white chocolate flavor comes through loud and clear, enough so that if you wanted to serve it with a cherry compote or some sliced and sugared nectarines, the flavor is bold enough to stand up to those fruits. 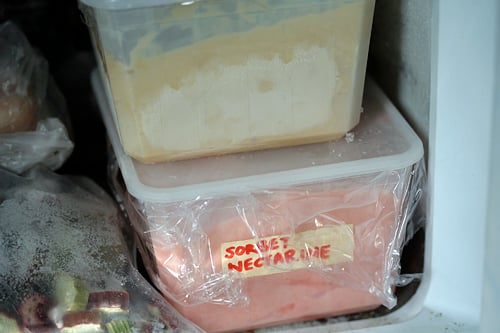 Similarly, I think this would accompany a chocolate cake perfectly. Or use it to fill cream puffs and douse them with warm chocolate sauce, or drizzled with additional caramelized white chocolate.

This batch got paired with a scoop of frosty-cold Nectarine Sorbet, which I made from the overload of nectarines I couldn’t help picking up at the market where the vendors were practically giving them away, since the season is in full swing. Taking advantage of their generosity, and the super-low price, I lugged home two kilos, about 4 pounds, and now have a very full freezer—which is often the case around here.

But even if you have a full freezer of other flavors, this ice cream is one you’ll want to make room for. Just don’t expect it to last very long in there. As you can see, I’ve already made a sizable dent in mine.

Make sure the caramelized white chocolate is warm when you mix it with the cream. You can reheat it in a bowl set over a pan of simmering water, or in a microwave on low power, stirring until smooth. There’s a few suggestion above for how to enjoy this ice cream, but I found it’s also intriguing with a few flakes of lightly-smoked sea salt flecked over the top.

(This is adapted from a recipe I created for the Washington Post.)

Alfajores with Caramelized White Chocolate (She Who Eats) 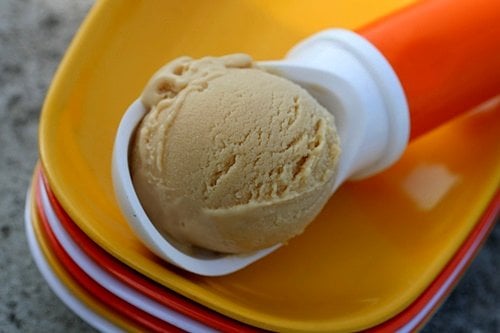