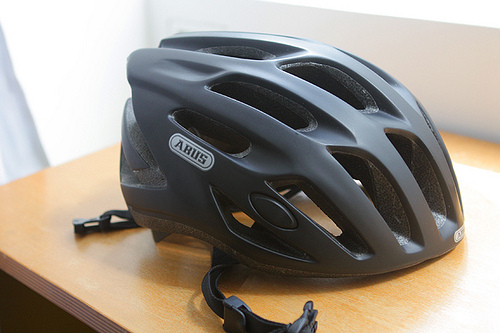 One of the great things about living in Paris is that it’s a pretty good city for bicycling. It’s relatively flat, the city has installed a network of bike paths, many one-way streets have been accommodated with a special lane off to the side for bicyclist going the other way (provided you don’t mind the terror of seeing a car coming at you full-speed, head on), and in spite of what’s between those previous parentheses, Parisians actually respect bicyclists. Even though pedestrians n’existe pas, I think that comes from the fact that a lot of drivers are actually cyclists themselves, or were in the past.

But unlike America, where people like to do things like see how close they can sideswipe cyclists, just for fun (often with a “Hey, the road is for cars!” – before speeding off, chuckling at how clever they are), bicycles are just a natural part of the streets and roads in Paris. One does need to be careful, though, because people in Paris drive like they walk, and there doesn’t always seem to be much sense of order to it and spatial relationships are…well, sometimes those n’existe pas as well.

(In a yoga class, a late arrival put her mat right on top of someone else’s, as if the other person wasn’t even there. And anyone who has done laps in a public pool invariably comes away with a few bruises.)

However in spite of running helter-skelter on sidewalks, and in the streets (and in yoga classes and public pools), there are not as many accidents as one might think. Unfortunately, I recently had two accidents while minding my own business on my bike. One was with on of those pesky men with unusually small zizis who compensate with an engine between their legs pesky motor scooter drivers, who like to rev their engines any chance they get…especially when they are stopped at a red light and a pedestrian crosses in front of them – which is something I don’t get.

(In fact, I usually stop where I am, right in front of them, and pretend I am checking my watch or messages on my phone. Then, when the light changes, I take a few extra seconds because as everybody knows, people riding scooters need to make every possible second count, because they are The Most Important People On the Streets – and almost as often, the sidewalks – in Paris.)

Anyhow, where was I? Oh yes, my accidents. The last one, I was riding through the Place de la République when one of those scooter drivers, who had revved his engine to get 4.25 centimeters ahead of someone else, suddenly slammed on his brakes, prompting me to slam on mine as well. Unfortunately the taxi behind me wasn’t as prompt as I was, and he slammed into the back of my bike, sending me flying.

After getting up and insisting to everyone who was kind enough to stop and make sure I was okay (except for the motor scooter driver, who, of course — split), I grabbed my loaf of bread that escaped less-scathed than my right leg, and hopped back on my wrecked bike, and headed home. And then I decided I should wear a casque, or bike helmet.

A casque is not to be confused what I was told* was called a casquette, which is for motorcycles – which is admittedly hard for Anglophones to say. (I got some funny looks when I told some French friends that a ‘casket” is actually something we bury people in…although the translation kind of makes sense if you consider the way motor scooter riders drive.) After scouting through most of the bike shops in Paris, where the pickings were rather slim, I found out why Parisians don’t wear bike helmets. It’s not because people want to look as if they don’t care if they perish (comme les motos); it’s because the helmets in Paris are invariably rather ugly.

Granted, few people look good in a bike helmet. But it doesn’t help things when they’re festooned with green frogs leapfrogging over dancing pink butterflies, the British flag (if you’re going wear one of those, heck, you may as well put a target on your head**), or Spiderman being chased by his nemesis over your skull.

(Okay, another reason folks don’t wear helmets can be pretty much summed up by this woman: When the city introduced the Vélib’ system of free bikes – “The city should get further subsidies and give Vélib’ subscribers vouchers to get helmets from big stores”, which would certainly reduce injuries. Although with 33,000,000,000 euros needed to balance the budget by 2013, those funds might be tied up for a while.)

Even though we’re being asked to shell out for our own helmets in Paris, I’ve been seeing more and more people wearing them on their heads, fashion (and non-reimbursable cost) be damned. A majority of bike riders fasten them to their head, but I’ve seen a few heretics “go rogue” and not bother to click together on the straps. I want to say, “Um, that defeats the point” – kinda like when I said to the scooter driver the other day when I stopped at a red light next to her, who she got mad at me for blocking her view of the light so she couldn’t see the nanosecond that it changed. I don’t think she was expecting me to rely with – “Really? That’s the worst of your problems? At least you don’t live in Syria”***.. and rode away. Fortunately I had on my helmet, so I didn’t have to worry about her running me off the road as well. 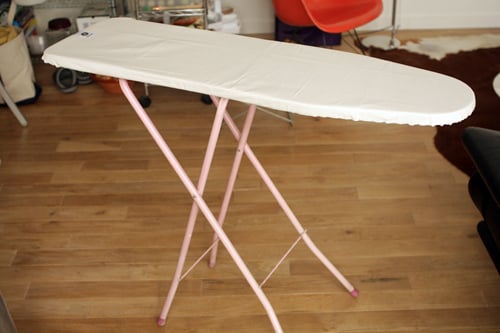 It’s said that French is a country of high taste, and not-so-high taste, with not so much in the middle. Since I live in the middle myself, I keep looking for things that are functional, priced moderately, and, most importantly, are void of unnecessary ornamentation. Consider my ironing board, which lives in plain view of me. I needed a new cover and was looking for one made of plain fabric, that was unobtrusive. It didn’t matter the color, it just had to be solid. I searched and searched and searched and searched, and found ironing board covers with designs depicting everything from bunches of balloons heading skyward, to ones with cow prints on them, which didn’t quite fit into my urban décor. After weeks of searching, I finally found the perfect iron board cover, in sold white. In England.

(However my initial excitement wore off soon after I realized that now that I had an ironing board cover, there went my excuse for walking around covered in wrinkles.)

While it’s true that bike helmets aren’t exactly flattering, neither is permanent brain damage. Another thing we’re seeing a little more of in Paris are les sacs à dos, or backpacks. As for myself, my kinéthérapist told me that I should stop carrying a messenger bag and start carrying a backpack. “True” he said, “eez not very estéhetique…” So I started shelpping around a modest black nylon number from Go-Sport until someone I know from Coach kindly offered to send me a nifty black leather backpack. Because, well, I couldn’t be responsible for making Paris pas esthétique. 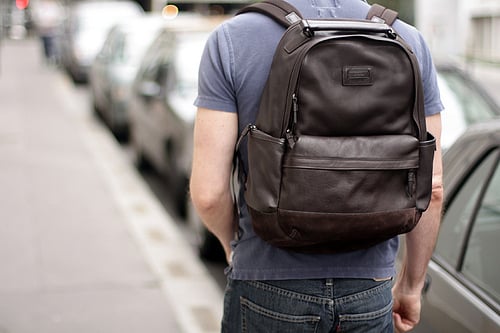 Fortunately it doesn’t have any bunnies, balloons, or caped crusaders on it. And it matches my new helmet, (which, like my plain ironing board cover, I also had to find online), which makes me feel a little safer out there. But even though I don’t have a superhero protecting my head, I’m riding a little higher. True, there’s likely a nerd-alert out there in the city for the dude with the bike helmet (which hopefully it mitigated by a sac à dos très esthétique). But I don’t care, because someone – and something – has got my head covered, as well as my back. Which is a good thing, because I haven’t quite gotten around to picking up that iron yet.

*I’ve since figured out that a casquette is usually what we’d call a baseball cap, in English. Which I guess just goes to show that even the French sometimes get confused about their own language. Or maybe it was just me. (Which is the likelier possibility.)

**The French and the British have traditionally had a love/not love relationship with each other. It goes back a long time, historically, and nowadays it’s more of fodder for some ribbing rather than an actual dislike.

***This is not to make light of the situation, which is truly tragic, but meant to put things into perspective. It’s just that there are worst things in the world than not being able to take off on a motor scooter the precise second the light changes to green. Unless she was going to an emergency medical appointment or late for an organ transplant. If she was, I apologize and am sorry that I blocked her view of the light.

(Even though there are often two traffic lights in Paris – one street level, and another one higher up. And all she really had to do was tilt her head upward.)