When I go back to the states, one of the questions I’m most-commonly asked is—”Aren’t Parisians rude?”

I recently got in my elevator and this was posted: 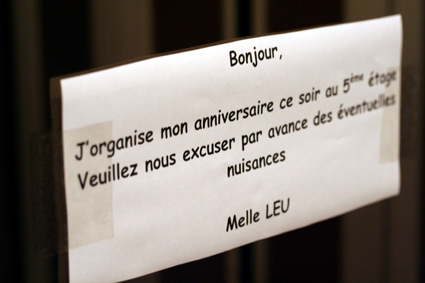 It’s a notice that my neighbor is having her birthday party and to please excuse her in advance of any noise that may be a nuisance. I’ve been told some newcomers see these posted and incorrectly assume that it’s an invitation to all in the building to stop by. So read carefully.

If you’ve ever been on the receiving end of the French ‘stare’ you know that’s because French people talk rather softly in public places and it’s considered rude to impose your conversation on others. Unfortunately that politesse don’t carry over to cigarette smoke. Yet.

But I think letting your neighbors know your having a fête is a nice, not very rude gesture, so you can plan accordingly with an Ambien or whatever.

I spent the night at another birthday party, one that I actually was invited to, where the host made a slew of gorgeous food: poulet en gelée, two poached bass with perfectly-turned vegetables, an abundant bowl of haricots vertes glistening with butter, and a fraisier for dessert, a strawberry-mousse and genoise that our host made himself.

Of course all the while the Taittinger flowed a bit too-easily from the popping of corks from endless Jeroboams of Champagne.

Needless to say, afterwards I didn’t need any help sleeping. Don’t know how my downstairs neighbors fared since I didn’t hear a thing after I got home.

And for most of the following day. 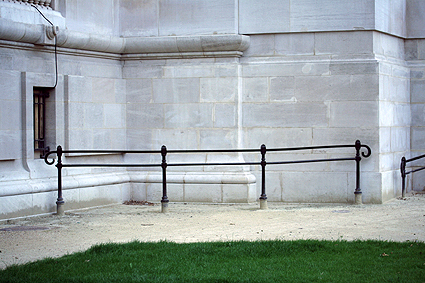 It’s Not Polite To Use This for That

I Know Paris Is Expensive, But…

Paris can be a very expensive city, especially for Americans who are used to paying rock-bottom prices for everyday staples. Here, though, things like laundry detergent, Ajax, plastic bags, and things like that are nearly double their price stateside.

So there I was at the Monoprix supermarket Friday afternoon and there were two middle-aged American women, who were probably renting an apartment nearby.

They were looking for toilet paper.

When I kindly took it upon myself to point out that what they had in their hands were actually paper towels, they were thankful, said a friend had recommended a brand of toilet paper with clovers on the packaging which they couldn’t find.

When I helped them find the Trefle brand, they were agahst.

So they bought the cheaper stuff, and headed to the cashier.

I really wanted to say, “Honey, if that thing ain’t worth an extra 2 euros, I don’t know what is.”

But they were already out of earshot.

And really, that would have been rude. 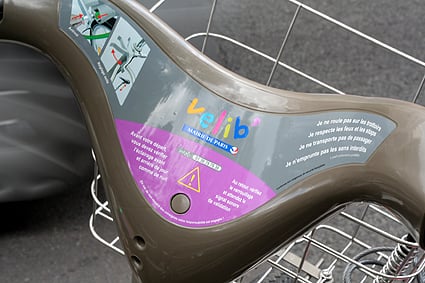 Paris has a lot of bike lanes. A few are way off to the side of the roadway, safely away from traffic. But the other ‘bike lanes’ in Paris are shared with the safest, most courteous drivers in the city: the buses and taxis.

There’s no better way to burn off a whole bunch of fromage-induced calories until you sense a behemoth Paris bus breathing down your back, racing to get by you any which way possible. And in the land-sans-lawsuits, in order not to get creamed, you need to ride your butt off in a race to the finish since they don’t really care how they get by you, even if they have to go over you.

And almost as bad is being behind a diesel-powered bus at a red light. Unless you have the superhuman ability to lunge that 50-pound bike out of the way fast, you’re likely to be enveloped in a lung-clogging cloud of thick, black diesel fumes.

I haven’t been on a bike in years, but I’ve have been taking advantage of our new free bike program here, Vélib’, which is challenging each and every muscle I have.

And after a few weeks of riding, I now understand why all those cyclists are doping themselves up on steroids—I’m about ready to do the same thing.

Like walking in Paris, it’s pas possible to go in any kind of straight line so you ending going far longer than you thought. Good thing one-way streets mean that it’s pas de probleme for those of us on bikes to hop up on the sidewalk and terrorize pedestrians, or I’d be riding in circles for hours. Although one needs to steer clear of of the black-booted police and shaved-head Pompiers of Paris.

On the plus side, I can’t tell you how many nice Parisians I’ve bonded with arriving simultaneously at a ‘parking station’ only to find it full, then heading on to the next one, and finding the same thing. Then the next one…and the next…etc. We joke, laugh, and there’s a few bofs! thrown in just because we’re in France.

Unfortunately the thrill of the hunt starts getting ennuyeuse as the night wears on. The inevitable rain starts and you’re too tired to try to find another station and fear you’re going to be circling Paris deep….very deep…into the night looking for a spot.

(Yes, the machines are supposed to tell you where the closest available parking station is. And they do, when they’re working.)

Still, I wouldn’t trade my bike pass for the métro; it’s a great way to get around the city and it’s nice being in the open-air. 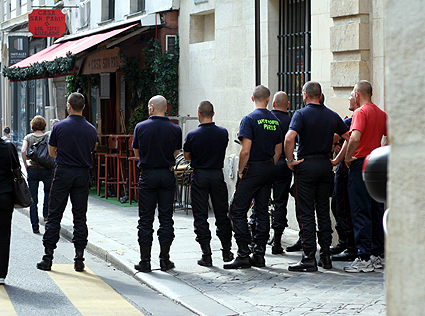 And the view’s a little better up here too.