Skip to content
« New! The Sweet Life in Paris – paperback edition
Why is the food so abysmal at Charles de Gaulle Airport? »
Pin
Share
Tweet
0 Shares 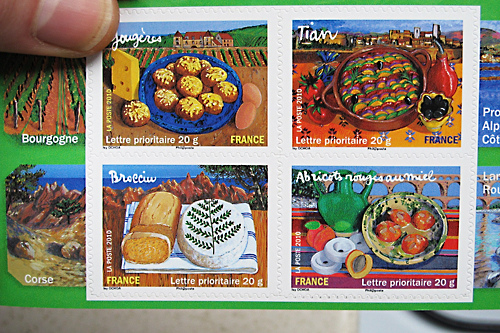 La Poste takes a lot of knocks. But one of the differences I’ve noticed between France and America is that the public services work a lot better than the private ones here. Part of it, I think, is that the French identity is very well wrapped-up in its vast network of public service programs. And if you’ve read about the rash of the unfortunate suicides by long-time France Telecom employees, it’s been noted that many of them may have become depressed when their employer became more of a commercial (and commercially viable) enterprise than a public service one.

(French Residents: I’ll let those of you insert your experiences with France Telecom here, old and new…)

I had to send an urgent letter today back to the states and went to the post office near the busy place de l’Opéra. You would think that would be the last place to find a nearly deserted post office, but when I walked in, two women greeted me at the door and asked me what they could do to help me. For a moment, I wanted to step back outside and make sure I hadn’t stopped into the Apple Store by accident. 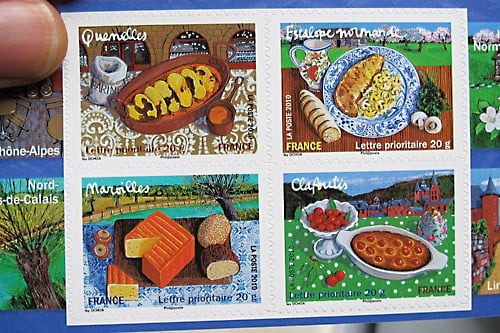 Around a year ago La Poste changed and installed machines to sell stamps and postage, along with a promise that no one would not have to wait more than five minutes for service. Some of my French friends grumbled that the post office was becoming too-slick and “un commerce” but when I pointed out that they were sticking to their word about getting you in and out of there quickly (and, French residents, we all remember those incredible lines just to buy a stamp or to pick up a letter), virtually all the grousing came to a halt. 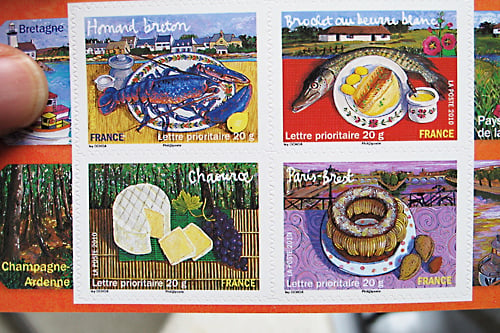 After the two women efficiently took care of me, we chatted a bit and because I didn’t want to leave (like, ever—) I asked if they had any interesting stamps, especially those with food on them. They hauled out the notebook and, of course, these immediately caught my eye. And, of course, I bought three booklets of them. Because of my petite accent, they made sure – three times – that I knew these were only for mailing letters in France. But silly them, surely they didn’t think I was actually going to use these stamps for mailing anything, did they? 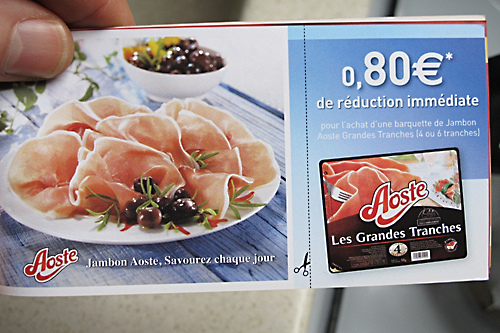 They’re part of a series called La France Comme J’aime which honors “les saveurs de nos regions”, or “the tastes of our regions.” The carnet of stamps doesn’t stop at being sticky souvenirs of French cuisine, the booklet includes an interview with a Basque chef, recipes for Endive and Ham Gratin, Cherry Clafoutis, and a vegetarian write-up for a tian of vegetables, which they point out a few times is végétarian along with a page of suggested French foods that are vegetarian, just in case we didn’t get it.

(Maybe they are giving égalité for the stamps they issued a few years back that featured the various breeds and races of cows in France. Like many French people, Romain has an affinity for cows and was elated, and asked me which breed was my favorite. I felt a little embarrassed because I never really gave it much thought. But I told him I would get back to him on that.) 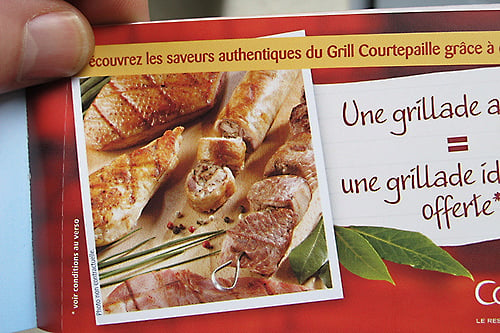 I probably won’t take them up on the “Buy One, Get One Free” offer from the startlingly dismal restaurants that are the sole places to eat on the French autoroutes. But the coupon for 80 cents off on ham, well, I don’t see the harm in taking them up on that. (Wouldn’t want to be rude, you know.) And if any one of the people in my post office ever considering ending it all, I’ll be there to talk them off the ledge. In fact, the only jumping for anything around here I could imagine is for these stamps.

Should I Move to France? (28 Questions to Ask Yourself)

5 Absolute, Surefire Ways to Get Rich in France