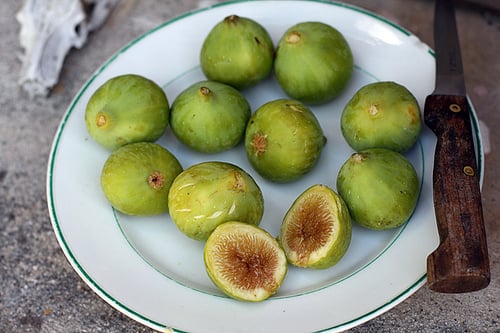 Like New Yorkers, Parisians swear they would never live anywhere else. But once the summer – or the weekend – rolls around, everyone can’t wait to make a sortie toward the nearest exit. 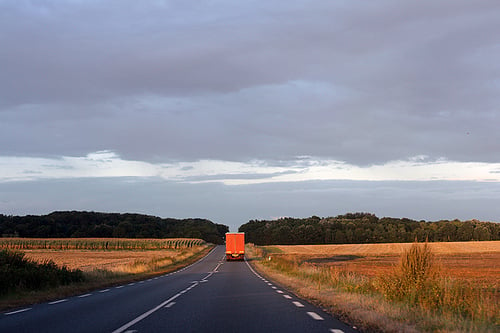 After fighting the usual traffic to get out of the périphérique, we took an exit and were shortly in the countryside, where the skies are big and clear, you’re surround by wheat fields and rows of sugar beets, and you can feel yourself unwinding as soon as you roll down your window and catch a whiff of the fresh air. 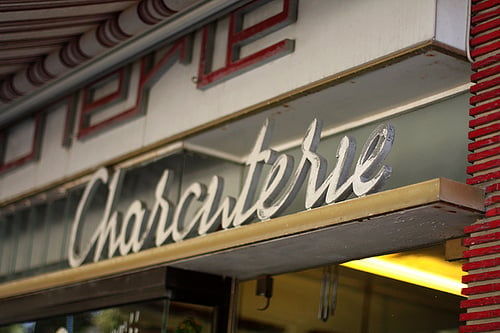 We wanted to extract every last bit from summer, before the fall weather kicked in. And figured it was our last chance to put on casual garb, sit around while watching the leaves getting ready to drop, and to catch up on some reading. And, of course, eat. 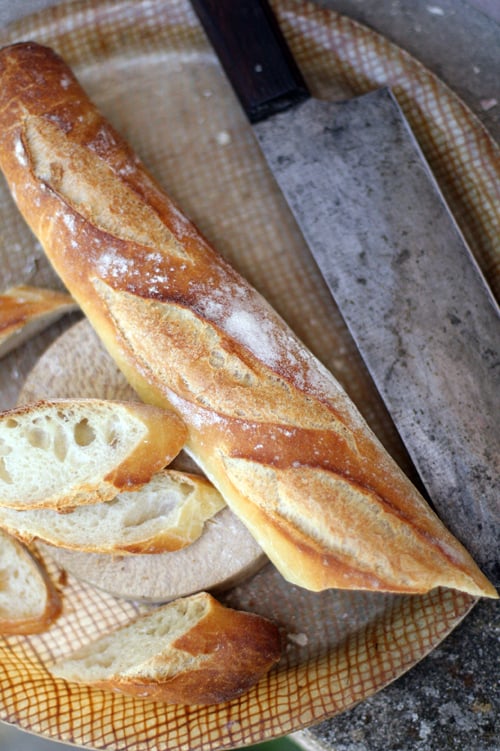 I was disappointed to find out the apple tree that I raid every year, because it’s always loaded down with apples, hadn’t produced a single specimen this year. So there would be no apple jelly. Then we took a drive to where I gleaned some wild plums a couple of summers ago, and found that they’d cut down the trees and there were nothing left. So there would be no wild plum jam this year, or any year in the future, unless I get lucky again. 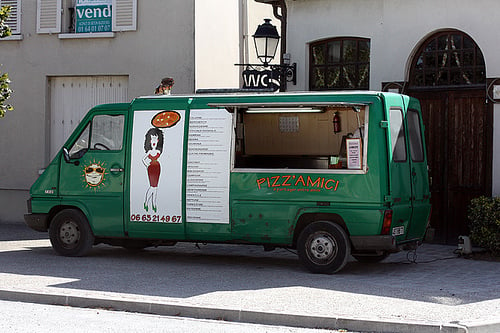 People keep asking me about the world’s newest profession: “Are there food trucks in Paris?” – and while there are a few at present, and I gave my ideas for a few new ones, they’ve existed in the form of pizza trucks, across the rest of France longer than they’ve been in Austin or Portland. 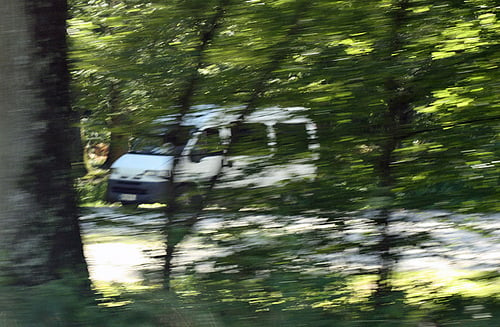 And in addition to selling pizza, speaking of getting lucky, the world’s oldest profession is represented by white trucks which dot the roadsides out in the country. And if you whiz past one, and aren’t sure if it’s a working woman or not, a small Peugeot or Citroën parked just right next to it is usually a good sign. Or if they’re not working (at the moment), there’s often a few candles lit up on the dashboard. Good to know, just in case folks are hungry for something other than pizza. Take that Austin and Portland.

(Although I’ve noticed that both trucks seem to use similar themes in their marketing schemes. Coincidence?) 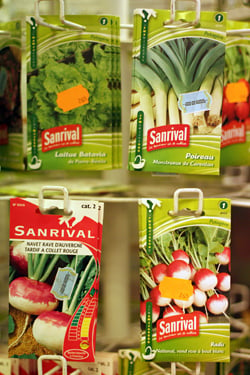 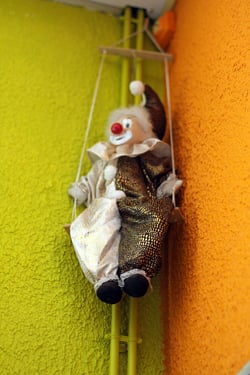 There are other quirky things you might come across in the French countryside, like clown puppets hanging in the corner of the local café (what the…?), and beautiful seed packets in the local corner stores. 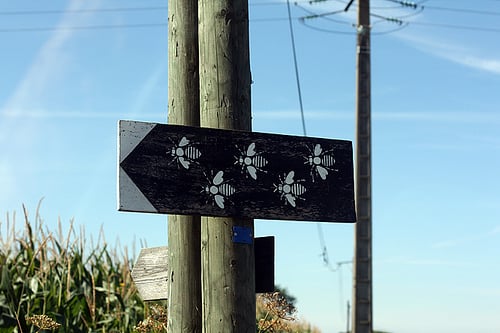 And I advise you if you’re driving around and pass a sign for something like locally cultivated honey, you make a stop. 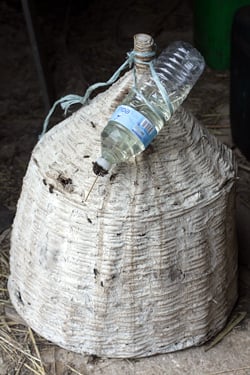 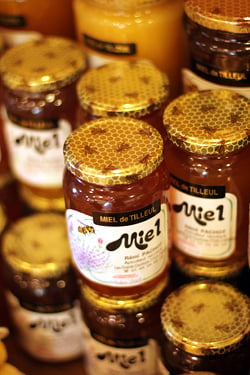 The beekeeper showed us his old-fashioned ruches (hives), making sure we didn’t have any problems in case we got stung. Then we tasted the tilleul (linden flower) honey, which was more complex than his others. And since I’m a fan of dark, brusque honey, I picked up a jar of that. Which would do, in lieu of a jar (or more) of wild plum jam or apple jelly in my larder. 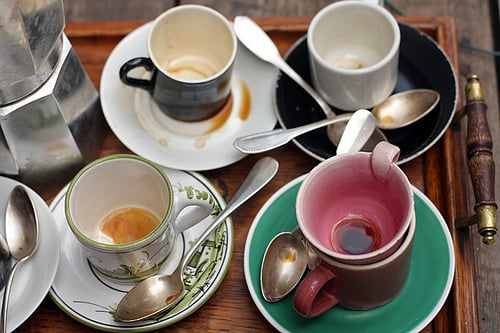 Another quirky thing that I’ve learned about Paris, at least according to my Parisian other half, is that people like to scavenge through things here. There’s a public garbage can across from where I live in Paris, and I swear it’s in some guidebook or something. Because people of all ages – and seemingly spanning every economic class – swing by throughout the day and rifle through it.

I don’t know what’s in there (although I do see a few dogs owners walk by with their pooches and drop in tied-up little plastic bags, so I can vouch for one thing that I know for sure is in there..), but they just can’t help from poking through it. When I mentioned how odd it was that almost everyone passing by can’t resist digging around through that trash bin, he told me that it’s très Parisienne. So check your guidebooks for your next visit because perhaps you’re missing something. (And I guess, so am I.) 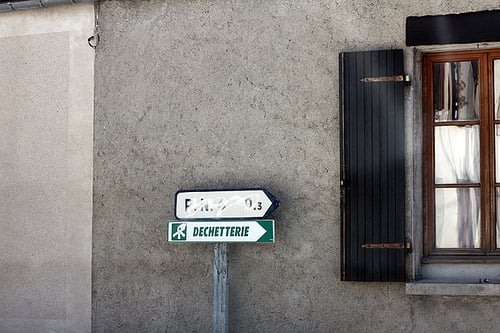 We went to the dechetterie (dump) in the countryside to haul a few things for the family. Before we could drive in, they checked our identity cards (and my passport), because I guess they need to know who is dropping off garbage and debris there. I’m mean, you just never know who is going to drop off a broken blender or cardboard boxes. 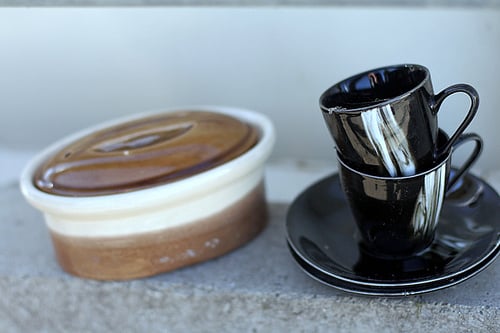 But lest you think I am oblivious to hidden treasures, at the dump I find these curious two espresso cups, probably from the 1990s, as well as a miniature pâté mold, about 6-inches long, and Romain couldn’t understand why I wanted it. I guess when you’re around things like this all your life, and they’re as common as custard cups are in America, you don’t really pay them a second thought. 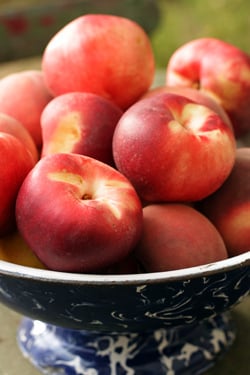 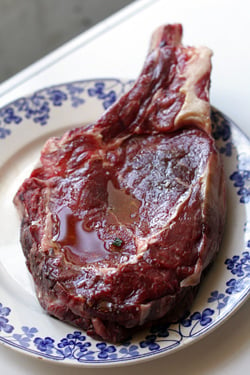 My favorite part of the French meal is the apéro, the time that comes actually before the meal, when little treats and something to drink is poured. We had Champagne because, well, does one really need an excuse to open a bottle of Champagne? There wasn’t anything in particular to celebrate, except that maybe we were about to grill up a monstrous and juicy côte de bœuf, seasoned just with sea salt and pepper, and a slick of olive oil someone brought back from Spain where they had held out on vacation until the last days of August, when they had to come back. 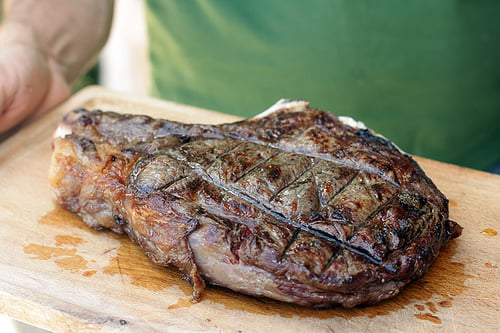 When I lived in California, I grilled anything I could. For one thing, there were a lot less dishes to wash up afterward. But more importantly, I loved standing over the first and charring everything that I could, from vegetables to toasted garlic bread. Although I rarely bought beef in America, it’s not France unless there’s beef involved. And they like it so rare it jiggles almost a little uncomfortably in the middle when sliced. 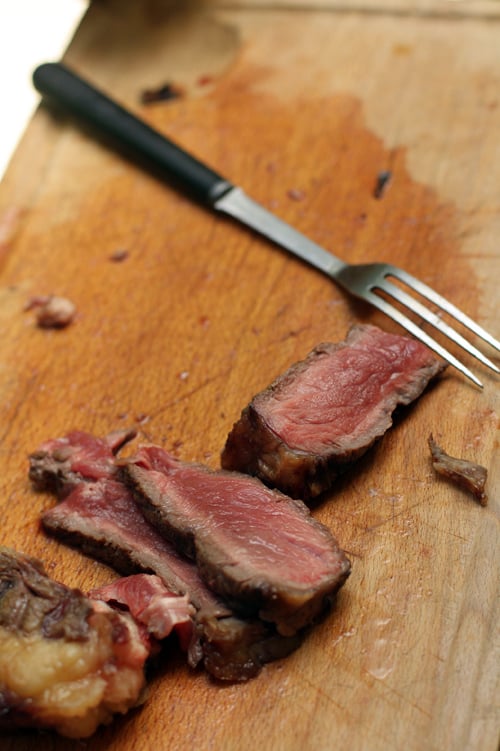 I added a touch of America by making a salad with blue cheese dressing. But I added a few cherry tomatoes for the quintessential Parisian touch. 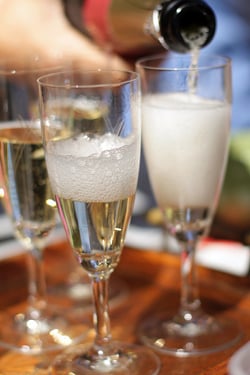 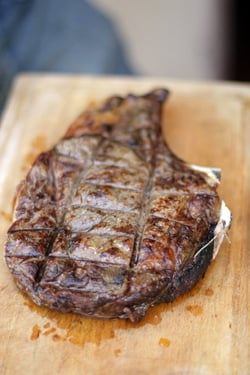 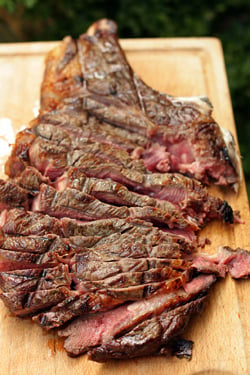 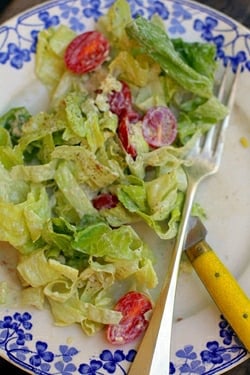 It’s funny because people were surprised when I just popped the ripe figs right into my mouth, and asked why I didn’t peel them first. 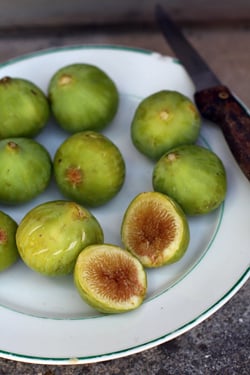 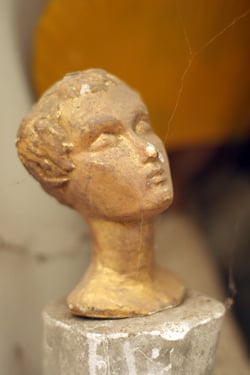 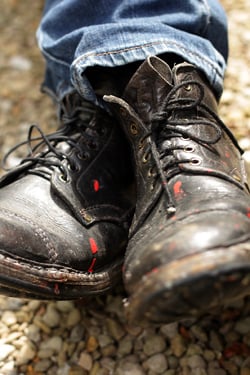 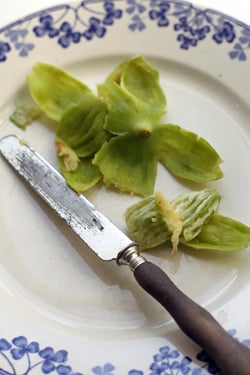 Because it’s becoming more well-known around here that I’m actually sharper than I look (or so I’d like to think), I replied, “Do you peel bread before you eat it?” Which pretty much assured that I wouldn’t get any further queries on the topic. 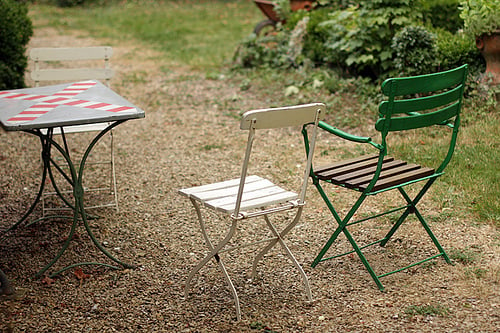 As the weekend ended, we said goodbye to the countryside, packed up the car, and headed back to Paris. I didn’t have any plums or apples, but I had some bunches of fresh sage and savory to tide me over until next summer. Well, more likely, at least until fall. 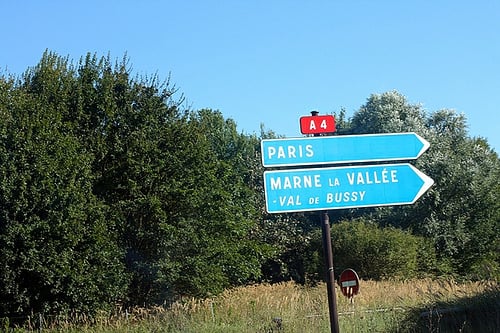