If you plan on eating at Le Verre Volé (The Stolen Glass) be sure to call first and reserve a spot. It’s located just next to the Canal St. Martin, a trendy quarter of Paris, and there’s only seats for about 18 people or so. But unlike New York or San Francisco or Los Angeles, you could call that afternoon and likely get a spot. During dinner I told my dining companion that if this was in New York, there would be a line out the door…and around the corner. 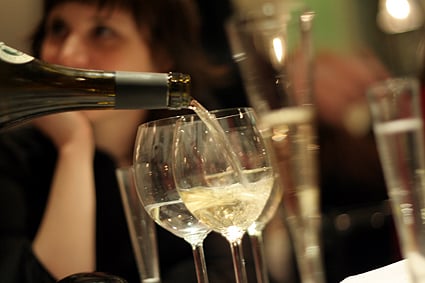 I began the complex task of choosing from one of the wines from the shelves. Each has the price written across the neck of the bottle since Le Verre Volé doubles as a retail establishment. To drink it there, they add a modest 7€. I scanned the shelves and chose a red Mazel from the Ardeches (18€) that was very light and fruity. A bit ‘fresh’ when first opened—once it sat, it gained complexity. I was happy that it was the perfect choice for the warm evening and hearty food. During the evening, practically every three minutes, someone would roar up on their scooter, disembark, and rush in to buy a bottle of wine for dinner.

We shared a jellied terrine of oxtails (5€). The finely shredded meat was gently molded with some spring asparagus and peas, all barely held together with jellied beef stock that was light. It was served with pickled, vinegary capers on their stems and dressed salad greens.

All the main courses were meaty: blood sausage with roasted apples and potatoes, andouillettes de Troyes, and veal Marengo. Not being much of a fan of ‘variety meats’ (as they’re politely called in America), I chose the caillettes ardechoise (10€), a patty of well-seasoned pork ground-up with tasty and still-chewy beet greens and spinach. It was roasted until searingly-crisp on the outside, and when I split it open, a moist cloud of steam erupted revealing fork-tender meat within.

One could also make up a meal composed of lots of the appetizers, like the roasted eggplant caviar, salt cod-stuffed peppers, or platters of various meats and cheeses.

The genial young men who run the place managed to keep the small crowd happy. One took orders and opened wine, while the other stood behind the tiny bar and dished up salads and roasted meats and sausages in the small ovens. Behind the bar is a glass door leading to an air-conditioned room, a jumble of boxes and bottles of wine.

I’ll see you there.

UPDATE: In late 2010, Le Verre Volé remodeled and put in a real kitchen and additional tables. I still like the place, however it did lose the impromptu feel that it used to have after the transition. And having a kitchen has made the menu a little more “ambitious”, which I’m not sure is necessarily a good thing. (I miss the copious cheese and charcuterie boards, for example.) It has also become quite popular so it’s best to book well in advance if you want a seat in this still relatively small dining room. On my last visit, our reservation was in their reservation book, but they told our small group that they couldn’t give us a table because they didn’t have room for us. The did give us the name and phone number of a restaurant in the 20th arrondisement that they recommended.