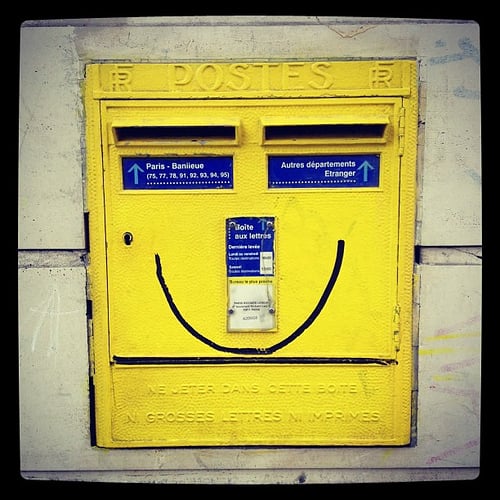 There is one thing that strikes fear in the hearts of all Parisians. It’s not a letter from the tax office, being body-checked by those seemingly fragile little old ladies pulling their shopping carts at the market, or learning that a model for Christian Louboutin moving in upstairs from you and installing brand-new hardwood floors: It’s getting a notification that there is a package, somewhere for you – that’s got your name on it.

If I had a bag of dried sour cherries of California dried apricots for everyone that offered to send me something that I was craving from abroad, I’d be knee-deep in sticky, shriveled up dried fruits. (Which is possibly a good thing, come to think about it.) My Inbox and social media streams are filled with helpful folks offering to send me everything from San Francisco coffee to felt-tip pens. So much so that I’m considering doing a post about my fondness for gold buillon, but am concerned that in spite of the value of the cavalcade of gold ingots that will be coming my way, that I’ll be spending an inordinate amount of time wrangling with the shipping company to get them to me. And it’s just not worth it.

When I moved to Paris, a Frenchwoman who works for an appliance company told me; “Daveed, you need to be standing at the door, with the door wide open, and your name written across your forehead” for something to be delivered. And I didn’t believe her until I was leaving my apartment a few times shortly afterward and found a missed delivery sticker on my door, with nary a knock or ring of the doorbell to announce its previous presence, just a few centimeters away. Yet so far, so very, very far from my grasp, as the next few weeks would prove to me.

Sometimes I think it’s a vast conspiracy by brick & mortar stores to sway folks away from online shopping. However those shifty folks have set up ‘relais’ points, shops and drop-off spots in various neighborhoods that accept your packages so you just go in and get it. Those work great, but they’re quite limited as just a few merchants work with them. And the guy who runs the store near me, which is such a mess it’s hard to tell what exactly he does sell in there, doesn’t even ask for ID. So I’m not sure I can trust him with all the precious metals and gold Rolex watches that I am anticipating after this post goes viral.

The most challenging of the lot is one that goes by three letters, and the first one is a “D.” Getting a message that D has a package for you terrifies us expats almost as much as a trip back to the states without health insurance does.

[Although another one runs a close second, which was a real cultural shift for me because in San Francisco the delivery man was my absolute very favorite person in town because he would bring me chocolate at least once a week then hang out and chat with me in his starched, tight brown shorts, which gave me a chance to reconsider my life as a baker. Because if I was a delivery man, I’d have legs like he did. However on the other hand, he probably didn’t eat as much chocolate as I did, either. So that is one fantasy that I had about him that would never get realized. Actually, the other ones didn’t either.]

I’m not sure why they don’t make the effort to get the packages to you. But perhaps if they delivered the package, they would be done quicker and the company might think they were expendable, and get rid of them. So it’s better for all (well, except us…) concerned if they stick with the status quo and hold out for a less-convenient time to make a delivery.

Whenever I hit le roadblock with a delivery company, which usually includes a flurry of “missed delivery” warnings – which I’m beginning to suspect are keeping a French sticker company in business – I call the US branch of the company since it’s actually cheaper to call them (which is free, thanks to my phone company) versus calling their “08” number, which is the equivalent of “800” numbers in the United States, except you pay 34 cents per minute to wait on hold, then if all goes well after you’ve shelled out €6,40, you get to speak to someone. (Because as everybody knows, if you’re too helpful or accessible to customers, they won’t come back.) So if I want to call their local number, I check the price of gold that day to determine whether its worth will offset the hold time if I call the delivery company.

[The much maligned La Poste has taken a lot of hits over the years. But a make-over happened a year or so back and the post offices in Paris were not only modernized, but made more efficient. At first, customers complained because they were used to doing things the same way over-and-over (and everyone complains when something changes – for the better or for the worse – it doesn’t matter). Until people realized that 1) They were in and out of the post office in five minutes, and that 2) The people who worked there were happier and more helpful.]

I don’t know if it’s like this everywhere else in the world, but in the US, they’ll leave the package with a neighbor. Here in Paris, they won’t do that because one delivery company I called told me that neighbors are apparently not to be trusted. (To make my case, U delivered a package to someone who they said was a “neighbor”…which was at an address way on the other side of town, and I haven’t heard from them. In fact, I don’t even know where the heck they are.) But I have a neighbor who runs a business and is always there, so my take is that it’s just too convenient, and you should be suspicious of anything that’s that convenient.

I was once delivered a package for another neighbor by accident, and when he came by to pick it up, I could see the almost tears of joy beginning to flow because that was the next two weeks of his life I had given him back.

So I’m waiting for a package to be delivered this week, after two others were finally returned after multiple delivery attempts, which I will have to take their word for because apparently I was not at home when they called me at home to tell me that I was not at home. I’m not sure what’s in the package that is en route, and it’s likely going to be a while before I find out.