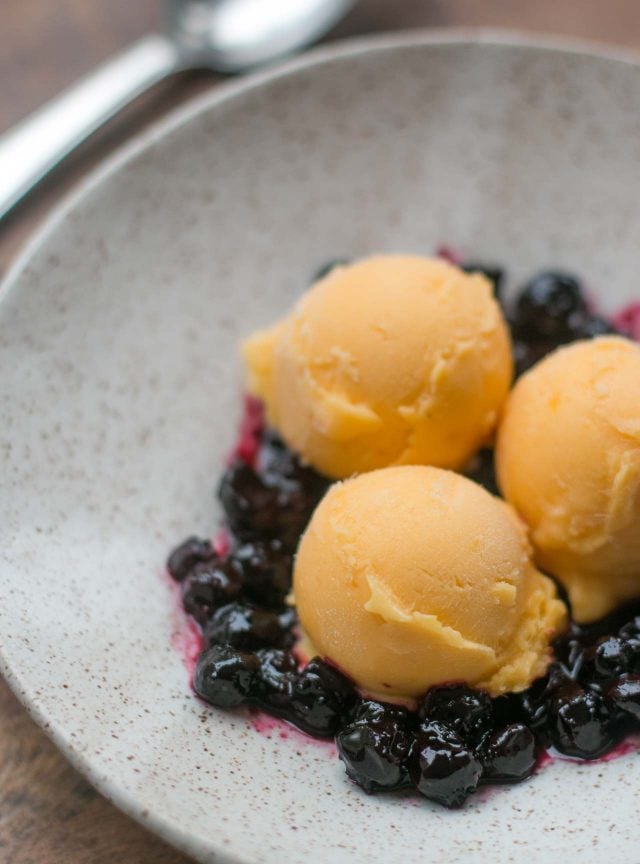 A French friend recently said to me “On ne peut pas tout avoir” – “You can’t have it all.” But with mangoes, I feel like I can. Soft, sweet flesh, sometimes with a hint of spice, and easy to peel, mangoes just may be the perfect fruit. When I lived in California, they were blissfully in season during the spring, bridging the gap between when last of the winter fruits were disappearing, and summer fruits and berries were still due to arrive.

Mangoes are so popular with many cultures as if you go to multicultural markets and neighborhoods, you’ll see them being sold by the case of nine or twelve, because people eat so many of them. In Paris, up behind the Gare du Nord by La Chapelle, there is an Indian and Sri Lankan community that reveres mangoes, and it can be a jackpot for finding the fruits when they are in season. When buying mangoes, take a good sniff; a ripe mango will not only feel slightly soft to the touch, but will exude a rich tropical aroma. Some varieties have green skins when ripe so color isn’t always the best indication. 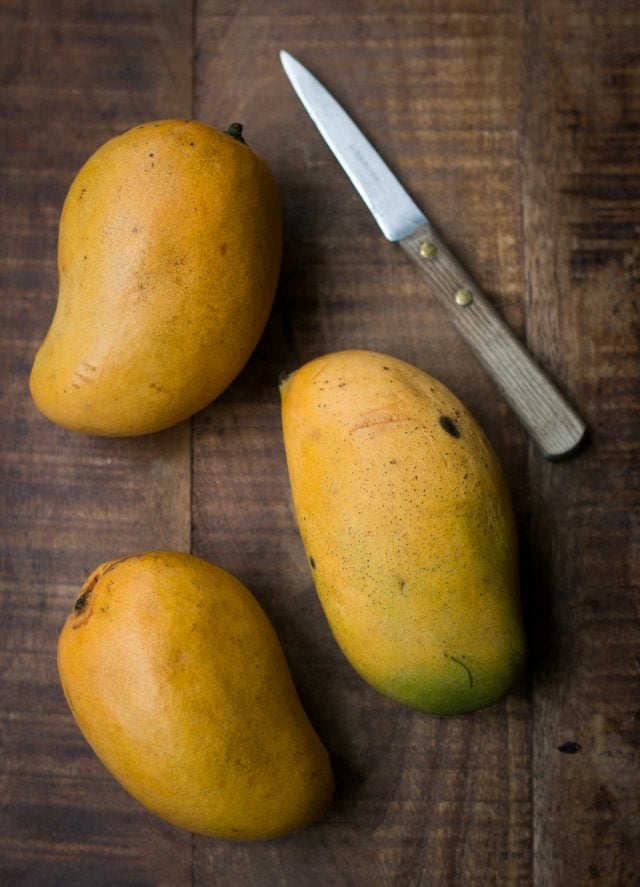 Fruit varies. Which is a good thing because if fruit was standardized, it would scare me. To make this frozen yogurt, I used Ataulfo mangoes, which are also called Champagne mangoes in the States. Some varieties of mangoes are sweet, others have flesh that’s a bit spicy. (And some are even used unripe and crunchy, like papayas, to make salads.) I like them all. You can tweak any sweetness in this frozen yogurt with fresh lime juice, which provides a bit of contrast to the silky mango flavor, as does the tang of the yogurt. 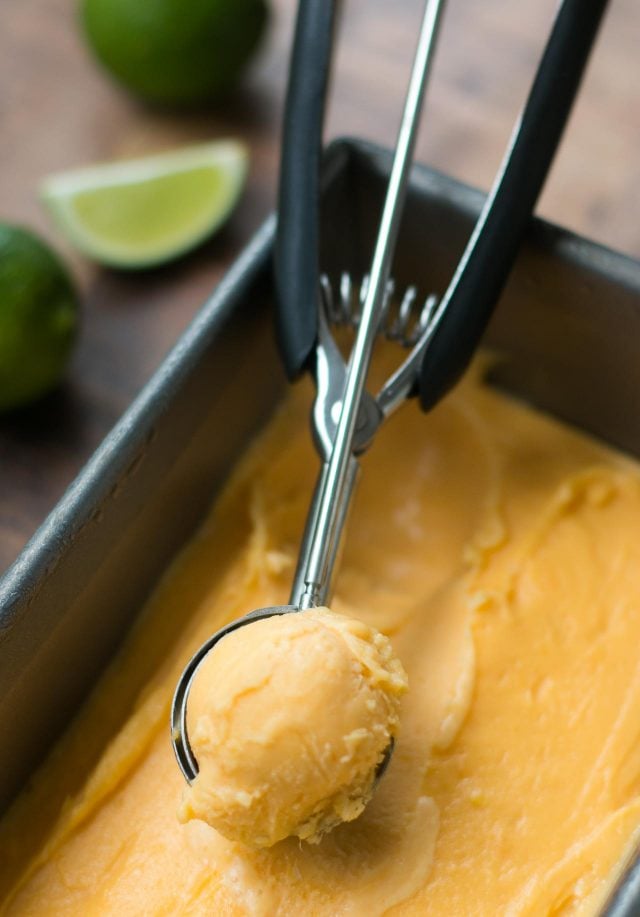 To peel mangoes, use a paring knife to carve away the skin. In the middle, there is a narrow pit that’s flat. Cut the meat away from the pit and dice it, then squeeze the pit to obtain as much of the precious juice/pulp as possible. One company came out with a mango splitter, which I haven’t used, but looks fun, especially if you’re a big mango-user.

Although mangoes are a tropical fruit, they have a particular affinity for blueberries. I had some in my freezer (in France, they’re called myrtilles and are less-common than they are in the States), and I pick them up if I see them fresh, although most of the time they’re pretty expensive, at least compared to America. So frozen will do just fine if they’re not available to you. 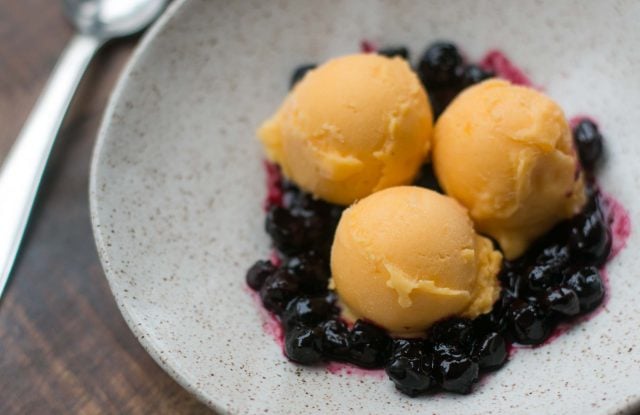 I used Greek yogurt here, which is strained and richer than regular yogurt. You could use either full-fat, low-fat or 0% Greek yogurt you wish, or use regular whole milk yogurt, which will yield a slightly more icy frozen yogurt. There are a lot of different types of mangoes around the world. Depending on what kind you use, you may want to strain the mango pulp. Taste a spoonful or run your fingers through it – if there are fibers, press the puree through a mesh strainer before using. For this recipe, I used four medium-sized mangoes, each weighing about 325g/11 ounces. To prepare mango puree: Some cut and prepare the mangoes with the skins on. (I’ve linked to some videos and posts after the recipe that explain how to do that.) With the peeled mango lying on a cutting board, I hold it so that the two “meaty” sides are the left and right, then cut the flesh away from the pit, trying to cut as close to the pit as possible, to get as much flesh as you can. Use a knife to cut away as much of the flesh that remains around the pit. Dice the mango pieces and puree them in a blender or food processor. I’m often asked about how to keep homemade ice cream soft. For this frozen yogurt, you could add 1-3 tablespoons of rum, to taste. But for more suggestions, check out that post for other ideas. Like most homemade ice creams and frozen yogurts, it’s best to remove this one from the freezer for five minutes or so prior to scooping.
For the mango frozen yogurt
2 1/2 cups (625ml) mango puree
2/3 cup (130g) sugar
1 cup (240g) plain yogurt (see headnote)
1 tablespoon fresh lime juice, or to taste
For the blueberry compote
3 cups (12 ounces, 340g) fresh or frozen blueberries
1/3 cup (65g) sugar
Grated zest of 1 lemon
3 tablespoons water
2 teaspoons corn starch or potato starch
2 tablespoons fresh lemon or lime juice
1. To make the mango frozen yogurt, whisk together the mango puree, sugar, yogurt and lime juice until the sugar is dissolved. Chill thoroughly, then freeze in your ice cream maker according to the manufacturer’s instructions.
2. To make the blueberry compote, heat the blueberries in a nonreactive saucepan with the sugar, lemon zest, and water until the blueberries soften and release their liquid.
3. Dissolve the corn starch or potato starch in the 2 tablespoons of lemon or lime juice and add to the blueberries. Cook until the berry mixture begins to boil, stirring occasionally.
4. Remove the blueberries from the heat and let cool until room temperature. The compote will thicken as it cools.

Serving: Serve scoops of the frozen yogurt with some of the compote.

Storage: The compote can be made ahead and refrigerated for up to 4 days.

How to Cut a Mango (Simply Recipes)