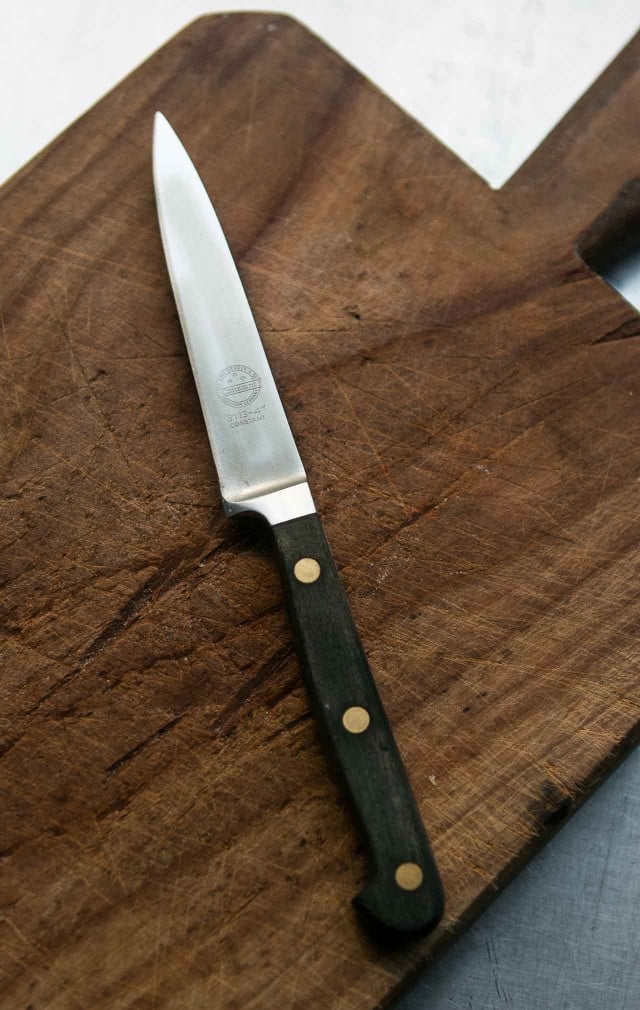 I’ve gone through several kitchens in my life, lots of pots and pans, various mixers, food processors, blenders and even a number of espresso machines. Kitchen scales? I’ve tried them all. But my one constant is my knives. No matter where I go, or where I move to, my knives come with me. I bought my favorite paring knife back in the early 1980’s and it’s still the most cherished item in my batterie de cuisine.

When I started my career as a cook I was told I needed to have two knives: a chef’s knife and a paring knife. Being new to San Francisco, I only knew about Whole Earth Access (now there’s a blast from our past, Bay Area folks…) but was told by the people I worked with in restaurant kitchens to go to Columbus Cutlery, in San Francisco’s North Beach neighborhood.

A tiny square of a store, walking into the shop for the first time, I found myself surrounded by walls of knives of all kinds: Bread knives, vegetable turning knives, chef’s knives, mezzalunas, boning knives (which restaurant cooks, whose humor would embarrass a 12-year old, always call “boners,” ie: “Can I use your boner?” – and even though it’s about as funny as “Whole Paycheck” now is, we still say it…), cheese knives, oyster openers, chestnut knives, meat cleavers, and even sewing scissors and nail clippers.

This was in the era when Japanese knives weren’t as prominent as they are today. If you wanted a cleaver, you went to Chinatown. And being a restaurant cook didn’t have the same cachet as it does today. So Columbus Cutlery was sort of an “insiders” place. Sure, everyone could go there, but it was the only place professional cooks went. I didn’t have either a chef’s or a paring knife, so went into the store. The small, friendly old woman at the counter took care of customers and her husband sat behind a sharpening wheel that you could hear spinning in the back.

When you came to pick up your knifes if you dropped them off to be sharpened, they would be ready for you, tightly wrapped in butcher paper, taped closed, gleaming and razor-sharp when you opened them. I don’t remember the couple’s names but when I was looking them up recently, they were only referred to as an “immigrant couple.” Considering the neighborhood, I’m sure they were Italian. (The other bonus of going to their shop was getting a Sacripantina at the nearby Stella Italian bakery.)

During my years as a cook and baker in the Bay Area, before parking tickets tipped the $100 mark in San Francisco, I would double-park and run into Columbus Cutlery to drop off, or pick up my knives left for sharpening. I didn’t trust my knives to anyone else to sharpen my knifes and I still don’t like to bring my knives in for sharpening anywhere else because I don’t trust anyone, no matter how competent they are. (It’s just one of my things…) My philosophy on the best way to keep your knives sharp is to not let anyone else use them. 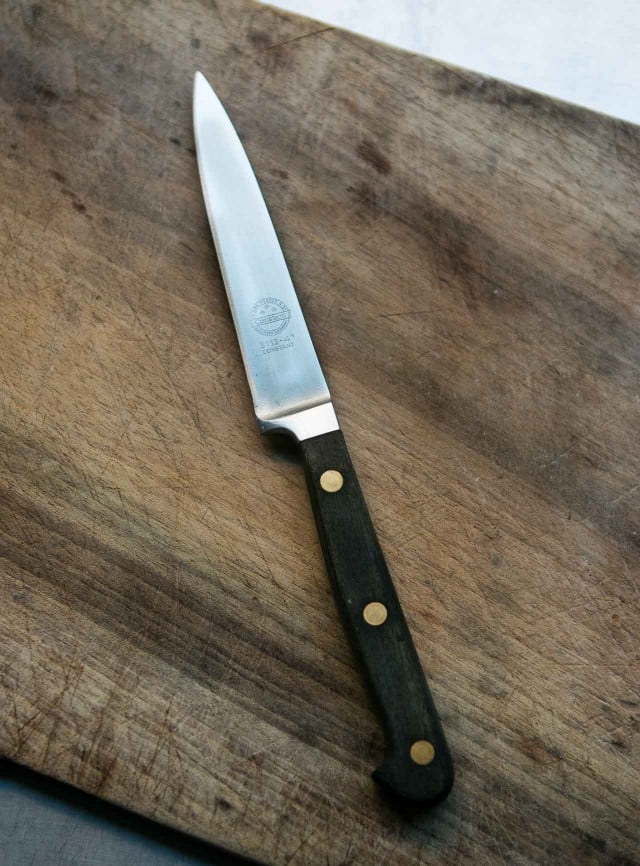 When people ask me, “What knife should I buy?” I tell them to go into a store and try them, because there is no one-size-fits-all brand or style of knife. Much depends on what feels good in your hands. (Not mine.) I took my own advice and tried various knives, and one that the owner had me try was a 4-inch paring knife made by a German company called Constant, with three tiny spades embossed on the blade. Like the other fine knives at the time (before a wave of Japanese and Japanese-inspired knives came on the scene), they pointed out that it was German-made, but it was well-priced and less than the more famous brands. I think I paid $16 for it and it became my most cherished kitchen possession.

Anyone who works in a restaurant knows how important their knives are, and the first thing I did as a line cook at the beginning of my shift was to take out my knives and carefully place them – my chef’s knife, my paring knife, and my bread knife – on a clean, folded kitchen towel, and no one was allowed to touch them without written permission.

One day, my paring knife disappeared. In restaurant kitchens, it’s a big no-no to use someone else’s knife without asking. (Preferably in writing.) Once, the head chef grabbed my chef’s knife and used the heel of it to bust a hole in the top of a tin of olive oil. Ouch! I still cringe thinking about it today.

No matter how much I kept an eye on it, my paring knife went wayward one night. I was distraught and it was never to be seen again, no matter how much I turned the place upside down, mobilizing the entire restaurant to find it for me. (The only time I threw a worse fit was when Barbra Streisand had come in for the dinner on my night off and the next morning, they told me about it, but no one though to call me and let me know. Consequently, I wouldn’t talk to anyone in the restaurant for at least two weeks after that.)

I won’t do the math because someone out there with better skills in that department could dispute how long it’s been, but I had that knife since my 20’s, and it’s decades later…and I still have it. It came back to me by serendipity: it turned up ten years later in one of the silverware trays in the restaurant. A busboy found it and knowing that it was a cook’s knife, he asked around if anyone knew whose knife it was. I was stunned to see it again, and it was, remarkably, still in pretty good shape. Since then, we have not been separated (my knife and I, not me and the busboy) – until recently.

I couldn’t find my paring knife in my apartment and figured someday, maybe in another decade, it would show up again. I decided to get a new one. I went online to try to find the exact same knife I had and it seems like it no longer exists. An internet search took me to this description: “Friedrich Herder Abr. Sohn, Constant-werk, Stahlwarenfabrik…is one of the oldest firms in Solingen tracing its roots back to 1623. The family was involved in the knife business for more 200 years before Friedrich registered the company in Solingen in 1840. They seem to have gone out of business and was bought out by another company, and don’t make the same knife.” Merde.

So I went to Les Halles in Paris, to buy a new one at Bovida. They didn’t have a huge selection like Columbus Cutlery did, and I missed the lovely Italian woman giving me advice, but I suddenly remembered the thrill of buying a new knife. My new knife was wrapped in a tough plastic package, so I couldn’t hold it before buying it, but the Déglon Sabatier name is a good one and I have one of their old knives that I like. So I pulled the paring knife off the wall display, which cost me around €25, and brought it home. 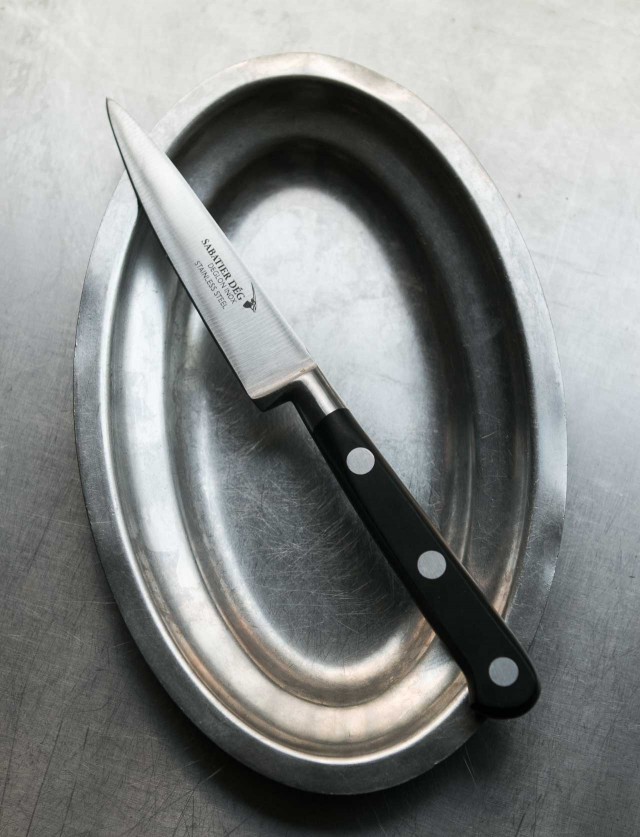 The design of their knives hasn’t changed since who-knows-when. My friends at Quitokeeto sell vintage ones, which look similar to the ones sold today, which are now made of inox (stainless steel). But the design is identical. If ya got it right the first time, don’t change it. So far, I’m very happy with my new knife and it’s the knife that I reach for most often because it’s so dang sharp.

However right after I bought it, by a stroke of luck, I found my old one a few weeks later. And now, they both now rest side-by-side on my kitchen counter. (Or sticklers for details might point out, on my knife rack.) The new one is noticeably sharper than my old Constant knife so I did finally break down and took my old favorite to the knife sharpener at the Bastille market early one Sunday morning. They did a decent job – and the guy who sees a lot of knives said to me, “That’s a nice knife!” – but in all honestly, I’ve been reaching for my new knife more than my old favorite, I’m sorry to admit. Since I let someone else aiguisé my knife, I’m pretty much over letting others touch my knives. And I’m almost over not getting to meet Barbra Streisand.  Almost.

The Cookware Shops in Paris