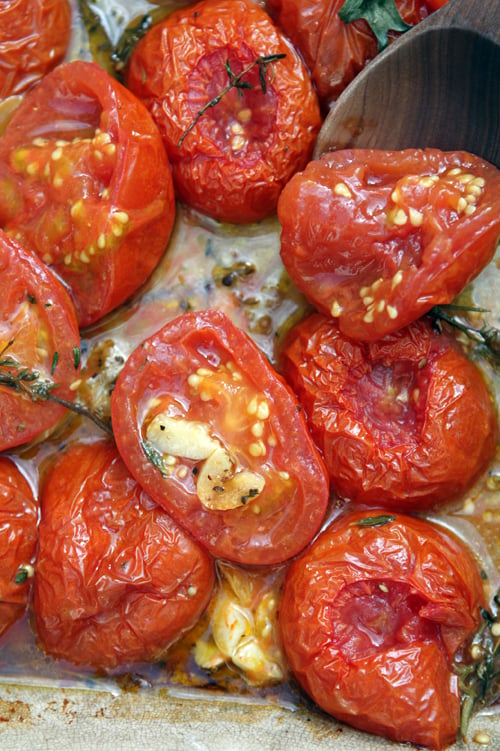 Someone around here jumped the gun here on early harvested tomatoes and I came home the other day and found a bowl of les tomates Campari in a little paper sack, in the kitchen. 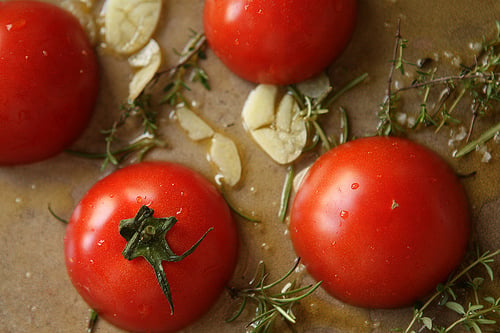 Since they weren’t as nice and softened as a full-on ripe tomato should be, instead of eating them on their own, I oven-roasted them, which is a great way to coax out flavor from less-than-pristine tomatoes. 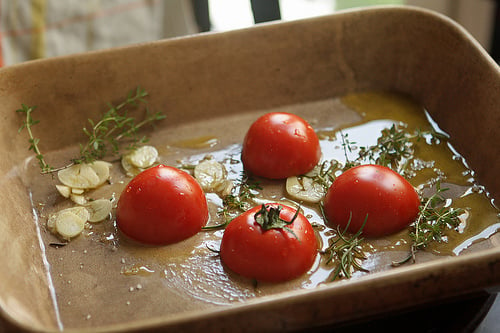 This is the perfect technique for both concentrating flavor and preserving tomatoes, something I also do at the end of the season. Then I freeze them in portions to use for a quick pasta or lasagna sauce in the fall and winter. 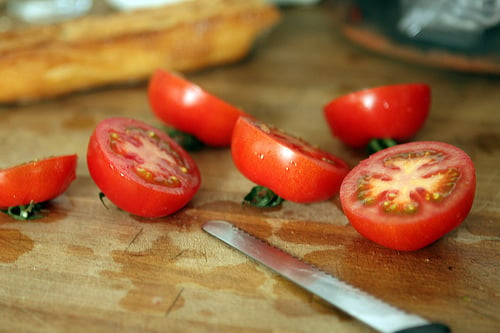 Because fresh tomatoes come from plants, and aren’t standardized (or at least they shouldn’t be) – moisture, ripeness, and variety are some of the various factors that come in to play – so the roasting time may vary. It’s kind of hard to overcook them, but do check them as they’re roasting every once in a while to monitor their progress. 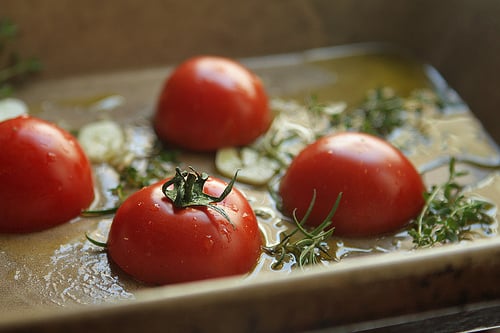 I especially like to roast tomatoes when I have something else in the oven, because I don’t always want to keep the oven lit, especially in the summer. If I’m making something that requires a higher oven temperature, I’ll put them in the oven, too, then turn the oven off and let them coast to the finish.

If you’re one of those folks who doesn’t like tomato skins (I’ve seen people push them to the side, but I eat them), they’ll slide right off after baking. I add fresh garlic, sliced, rather than minced, because the long-roasting brings out the sweetness in garlic, and it’s nice to get substantial bites of garlic along with the meaty tomatoes rather than little bits that wither away. 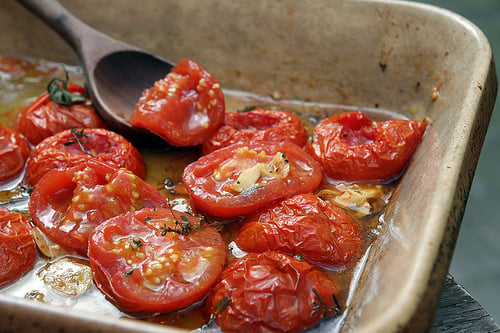 For dinner the other night, I toasted some day-old bread brushed with olive oil in the oven, then rubbed them with fresh garlic cloves while it was still warm. If you have an outdoor grill, all the better. (And I’m jealous.) 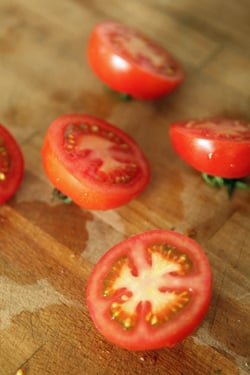 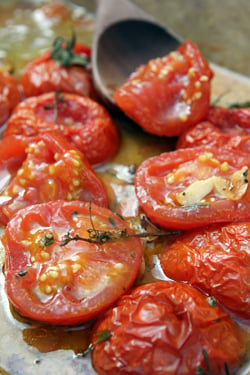 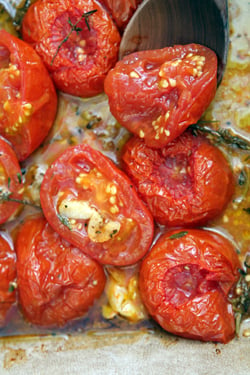 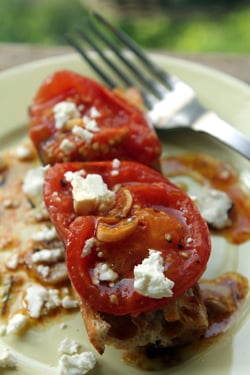 Then I smushed down a few tomatoes on it, topped it with crumbled feta, and scattered a fresh herbs on top. While we were sitting outside, drinking glasses of chilled wine and enjoying the marvelous spring weather, a few neighbors came by and joined us. I was happy that I had extra tomatoes on hand..and so were they!

This recipe can easily be increased. The important thing is to use a baking dish or pan big enough so that they tomatoes are not too crowded. You want room between them for the moisture to escape, which concentrates the tomato flavor. If you use a metal pan, make sure it’s not aluminum or made of another material that might react with the acidic fruits. And it’s up to you if you want to cut out the stems before roasting or not. You can see here I did some, but not the others (for whatever reason was running through my mind at the time.) The herbs can vary as well; basil, oregano, or marjoram all pair nicely with tomatoes.
2 tablespoons olive oil
1 clove garlic, peeled and thinly sliced
8-10 branches of fresh thyme
a few spring of fresh rosemary
salt and freshly cracked pepper
1 pound (450g) tomatoes, (8 small or 4 medium-sized)
1. Preheat the oven to 325ºF (165ºC.)
2. Pour the olive oil into a shallow baking dish or pan and add the garlic, thyme, rosemary, and salt and pepper.
3. Cut the tomatoes in half horizontally, then use a sharp knife to remove the stems, if you wish. Toss the tomatoes with the oil and seasonings, then lay them cut side down in the dish.
4. Bake until the tomatoes are completely softened and wilted, and start to wrinkle. Depending on the tomatoes, they'll take between 1 to 2 hours to cook.

Storage: The tomatoes will keep for about five days in the refrigerator. They can also be frozen for up to six months. 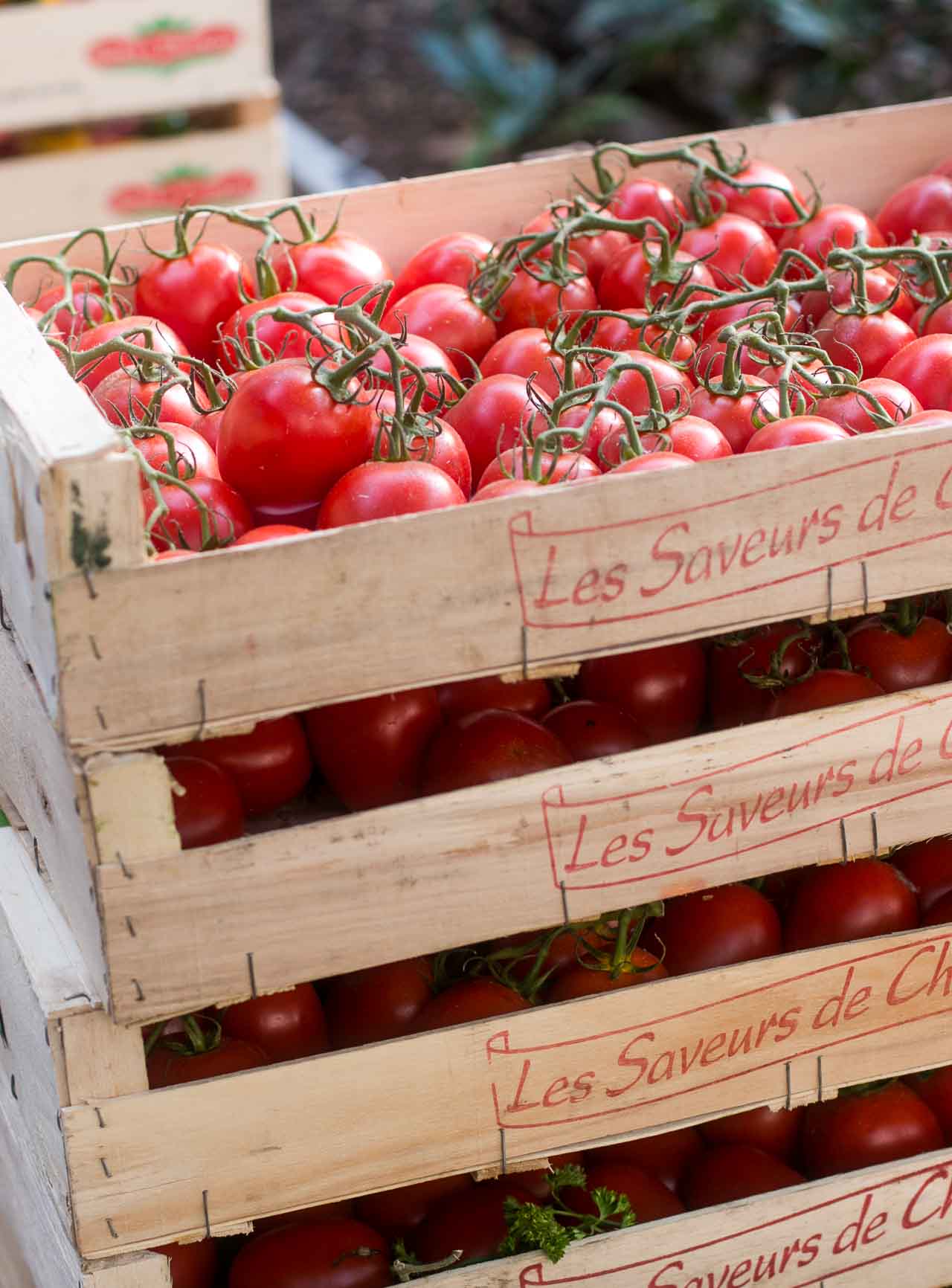