Spring in Paris is truly a glorious time.

Even though this winter was relatively mild, it’s nice to peel off the wool scarves and mittens that we’ve all been bundling ourselves up in to ward off the damp, chilly air and start packing them away.

Deep-scarlet strawberries start appearing at the market and cafés waiters across the city slide extra seats outside as all of Paris starts to stir from its winter hibernation. 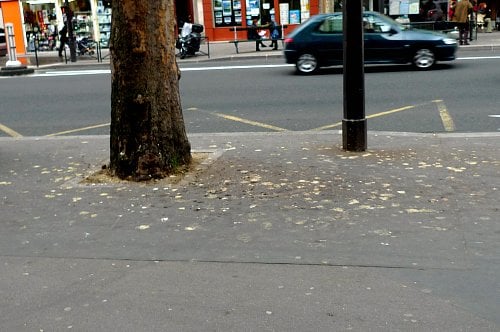 Unfortunately, that includes the pigeons too.

Those wicked beasts that coo outside our windows, who wake us up at the crack of down with their incessant warbling on windowsills and ledges everywhere. They soil and permanently damage all of the magnificent churches and monuments of Paris. And like the rest of the city, I suppose, they’re celebrating spring by enjoying more time outdoors socializing with their friends.

But unlike (most) civilized Parisians, they don’t care where they let loose.

During this week and the next few, they’re poised high up in the trees, causing much fear of being the recipient of their crotté droppings. (And whatever they’re eating doesn’t seem to be agreeing with them.) It seems to be pretty well-known amongst the locals to avoid standing under trees at all costs, but I’ve seen plenty of unsuspecting tourists and a few newcomers get nailed by those feathered foul lurking above.

And sorry about the icky picture. But if I have to see it, then so do you.)

How to Survive Paris in the Summer

8 Coping Tips for Living in Paris