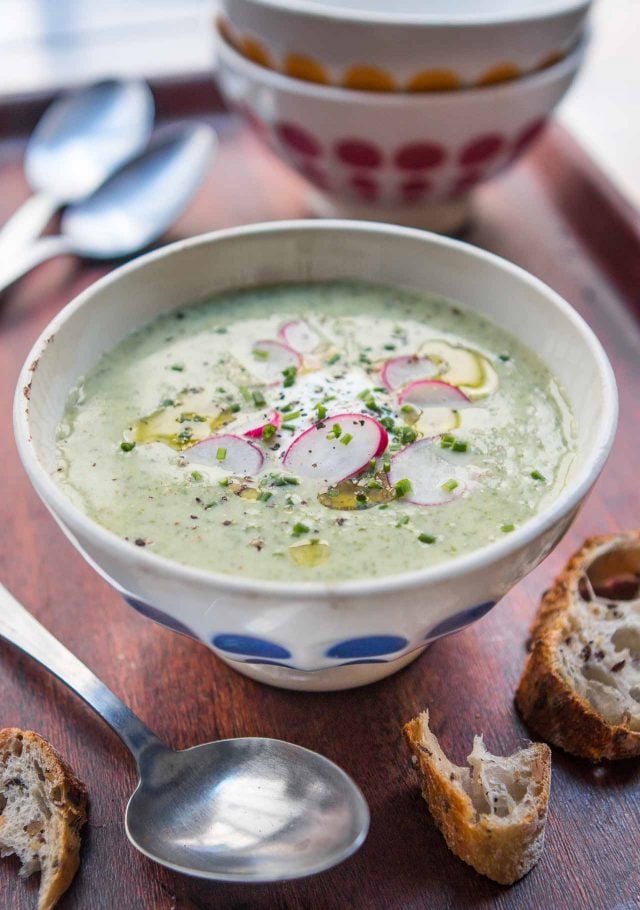 Tough times call for looking at everything in the kitchen as a potential source of food. I’ve been saving the breadcrumbs on my cutting board and scraping them into pots of soup. I parsimoniously scrutinize every egg I use, counting how many I might need for any upcoming baking projects. Fresh lettuce has become a precious commodity as I’m trying to only to go food shopping only one day per week. We don’t have the same shortages (or hoarding) they have in other places, but some things are in short supply, mostly pasta, rice, flour, and yeast. 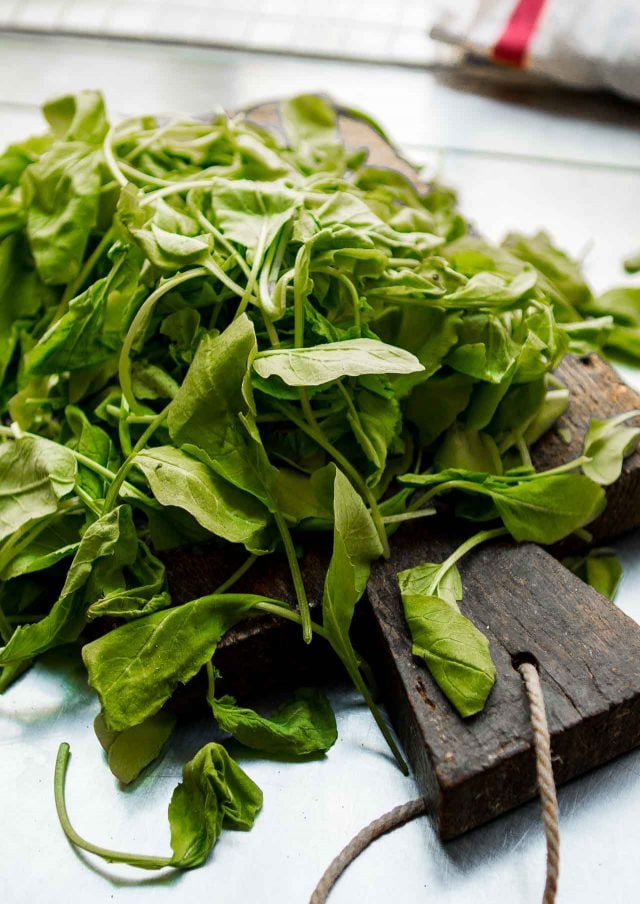 When I filled my wheeled caddy with produce on my last trip to the natural food store, I included two big bunches of radishes since we eat a lot of them, and I didn’t want to be caught without any. Usually, I toss the leaves, since we don’t have composting here yet, and I do so much cooking and baking, it’s not possible to always use everything*. (I need to go outside sometimes, ya know, even if we’re not locked down in confinement.) But I remembered when we used to visit Romain’s parents, they would often serve us Soupe aux fanes de radis, or Radish Leaf Soup. 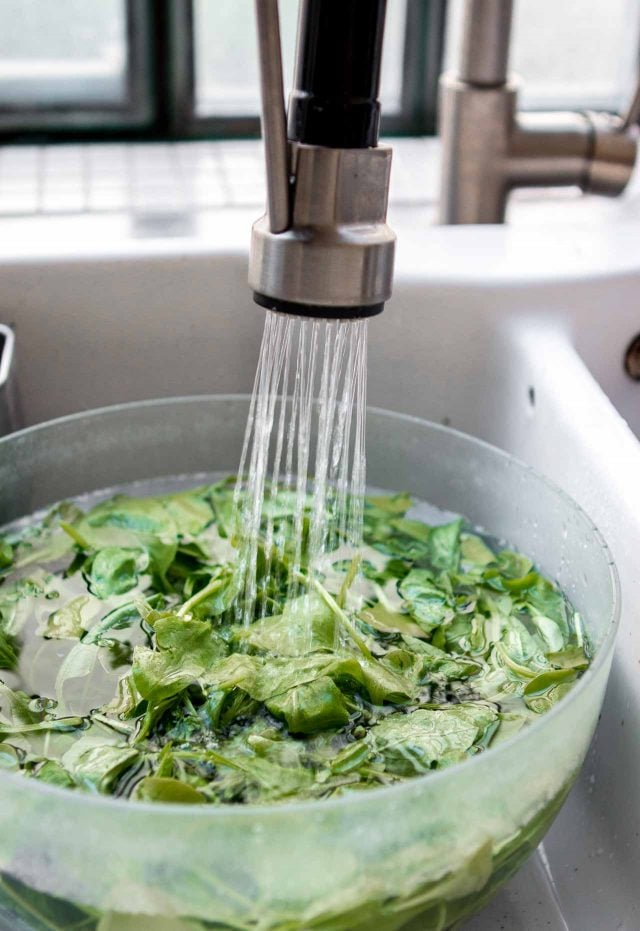 It’s one of those foods that was born out of the idea of using everything and wasting nothing. Like “nose-to-tail” cooking, this would be “root-to-leaf.” All parts of the radishes are used, from the spindly tips of the radishes to the mildly peppery greens sprouting off the tops of their heads. The meaty radishes themselves can be sliced and served over the finished soupe, or velouté, since I find a touch of cream smooths out the soup nicely and carries the flavor nicely through the bowl. 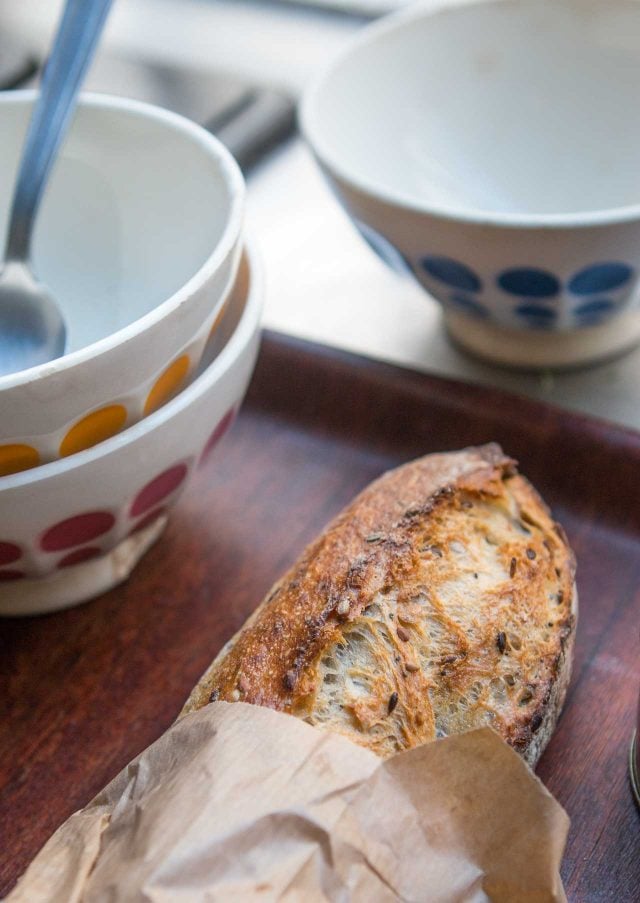 Going to a bakery, in addition to having fresh produce, has become another thing that feels like a luxury. I’ve had quite a few close calls with “space invaders,” as somehow, a number of others haven’t gotten up to speed on social-distancing guidelines and the rules are elusive (or don’t seem to apply**) to them. So going out has become too much of a challenge for me, as I remain cautious. Romain is a champ, though, and will risk it all for a baguette, and for me. And that’s something I’ve become extra-appreciative of, too. 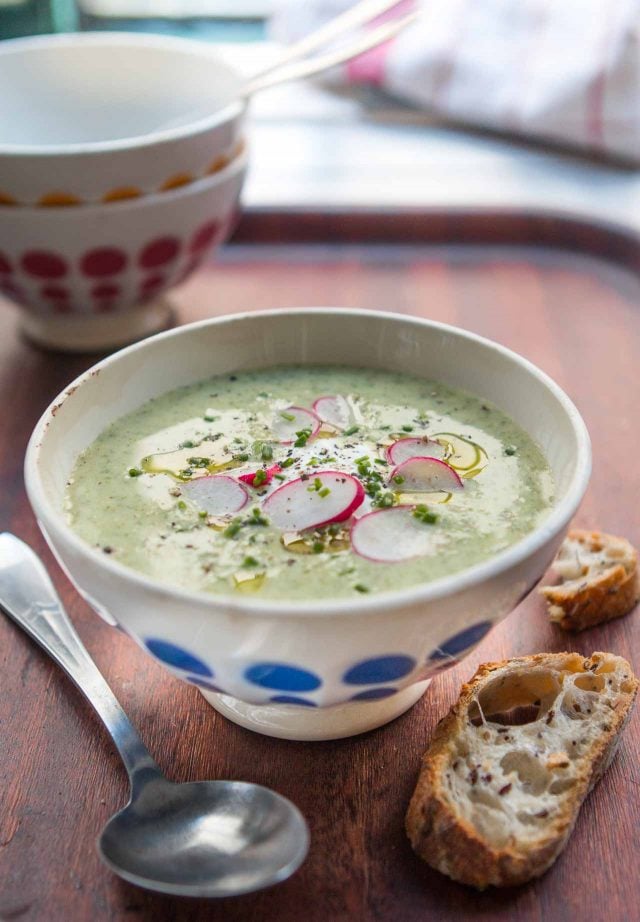 I strongly suggest you use radish leaves that are unsprayed or organic, and wash them well to make sure all grit has been removed. If you don't have enough radish leaves, feel free to make half the recipe, or bulk it up with lettuce or another mild green. Something like spinach, kale, or Swiss chard will overtake the flavor of the radish leaves (although it's not the end of the world if you're trying to use up odds and ends of various greens), but you could use arugula in addition to the radish leaves, or something similar. I don't peel the potatoes but you are welcome to. If using commercial chicken stock, cut the salt in half and add more, to taste. If you don't have chicken stock, water or vegetable stock works fine. I added a touch of heavy cream, which smoothed things out nicely and gives the soup a subtle richness, but offered a few alternatives. You could use more, or use regular milk (cow or plant-based), or leave it out. Possible garnishes are, but are not limited to, pumpkin seeds, sliced radishes, crème fraîche, sour cream, olive oil, freshly cracked black or a pinch of red pepper powder, scallions, edible flowers, fresh herbs, a dollop of pesto, or a dribble of pumpkin seed oil.
2 tablespoons butter, salted or unsalted
2 tablespoons olive oil
1 large onion, peeled and diced, or 2 leeks, cleaned and sliced
1 1/2 teaspoons kosher or sea salt
freshly ground black pepper (I used a total of about 1 teaspoon of pepper)
4 cloves garlic, peeled and sliced
2 medium potatoes, washed and diced, (12-16oz, 340-450g)
2 cups (500ml) water
12 cups (lightly packed) fresh radish leaves, rinsed very well (9 oz, 270g)
3 cups (750ml) chicken stock
1 tablespoon Dijon mustard
1/8 teaspoon cayenne pepper
1/2 cup (125ml) heavy cream, sour cream, mascarpone, or creme fraiche
1. Heat the butter and olive oil in a soup pot or Dutch oven over medium-high heat. Add the onions and cook, stirring frequently, seasoning them with the salt and pepper, until soft and translucent, about 5 minutes. Add the garlic and stir for a minute or two, to help them release their aroma.
2. Add the potatoes and 2 cups of water to the pot. Cover, bring to a boil then reduce the heat to a steady simmer and cook until the potatoes are tender when poked with the tip of a sharp paring knife, about 10 to 15 minutes.
3. Add the radish leaves and stock. Cover, bring to a boil, then reduce the heat and simmer just until the radish leaves are wilted and cooked through. Remove from heat.
4. If using an immersion blender, add the cream, mustard, cayenne, and cream to the pot and puree until smooth. If using a standard blender, let the soup cool until tepid then puree the soup with the cream and mustard. (Never fill a blender more than half full with hot liquid as it can blow off the lid and cause injuries.) Rewarm the soup and serve with any of the suggested garnishes.

Storage: The soup will keep up to four days in the refrigerator and can be frozen for up to three months. 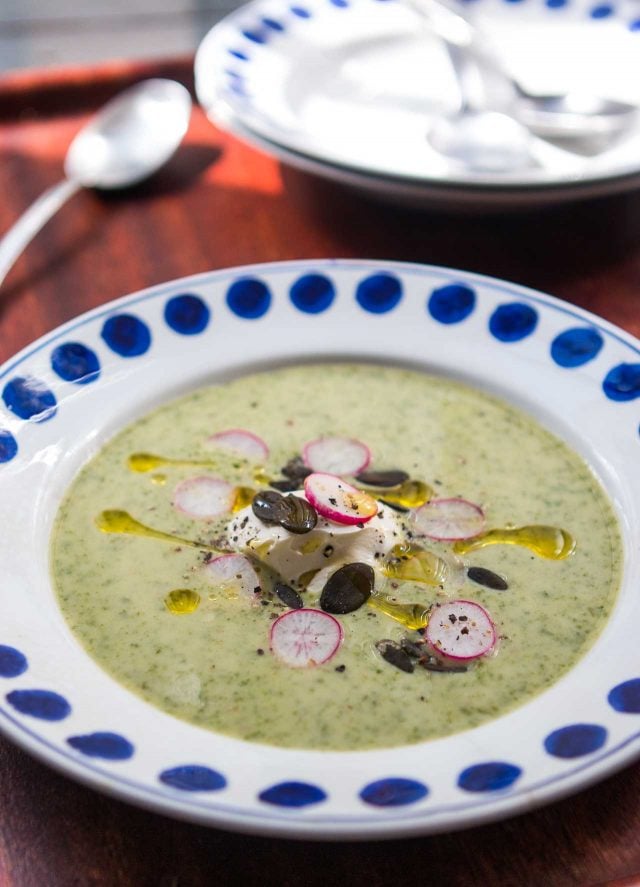 **Sorry to be nebulous here. I haven’t figured out why so many haven’t gotten the message about keeping one’s distance since the government and health ministry have done an excellent job of diffusing that information.