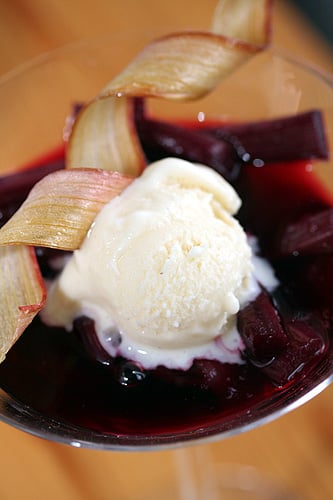 A couple of years ago, I was invited to do a demonstration at the Greenmarket in New York City. I jumped on the chance, since I love that market, but as the date closed in, I got a message informing me that they didn’t have a kitchen…although they did have a single-burner hot plate.

Being early spring, aside from counting on a stove, I was also counting on plenty of berries, like we had in California. But they also informed me that there may only be a couple of baskets of those—if I was lucky. And knowing how people tend to gravitate unnaturally towards free samples, I didn’t think two baskets would be enough. Heck, I’d probably eat both of them myself while getting set up.

Panicky, I reached into my brain and remembered a great recipe from Susan Loomis for Red Wine-Poached Rhubarb, which is easily made in a saucepan on the stovetop—or hot plate, and is fabulous served warm with a scoop of ice cream melting on top. 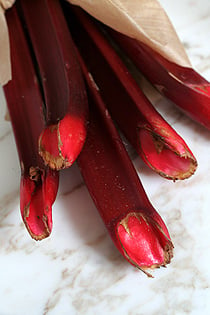 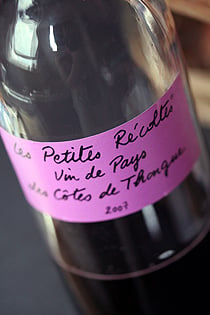 I’m not going to spend my time explaining how if you don’t like rhubarb, you should try this recipe. Because to me, there’s nothing more annoying than someone trying to convince me to try something that I already know that I don’t like. But if you’re part of the “in crowd” of cool, sophisticated people who know and appreciate really good foods, like rhubarb, this recipe is a winner.

Aside from it’s ease of preparation, this recipe has just a few ingredients and can be prepared with just five or six stalks of rhubarb, like the gorgeous stalks I picked up at my market last week, along with some leftover red wine. (Rosé would probably work, although for some reason, I never seem to have any of that leftover.) It also has the added advantage of being a dessert that benefits from being prepared in advance, and letting rhubarb steep in the wine reduction for a
few leisurely hours. 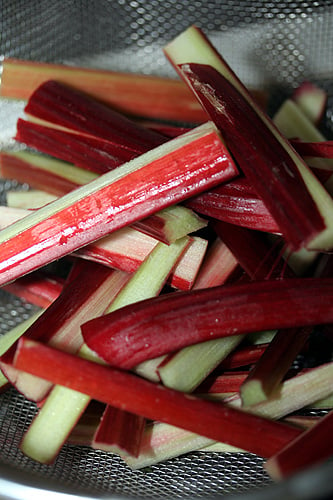 Adapted from a recipe by Susan Herrmann Loomis. Breaking with those who know more than I do, I use a downscale red wine when poaching fruit. The bottle I chose cost whopping 2.30€, and was on promotion, so I got an additional 20% off. But feel free to use any fruity red that suits your fancy.
2 cups (500ml) red wine
1/2 cup (100g) sugar
1 tablespoon honey
1 small cinnamon stick
2 whole cloves
2-4 allspice berries
1 pound (450g) rhubarb, trimmed and rinsed
1. In a wide, non-reactive saucepan, heat the wine, sugar, honey, and spices.
2. Cut the rhubarb into pieces, roughly the size of carrot sticks.
3. Once the wine is almost boiling, poach the rhubarb in two batches, standing vigilant with a slotted spoon. When just tender, remove the rhubarb and put it in a bowl and poach the remaining rhubarb.
Depending on the rhubarb, each batch will take 1 to 3 minutes to poach.
4. Reduce the poaching liquid over moderate heat until you have about 3/4 cup (185ml). Pour over the rhubarb pieces and let stand for a few minutes before serving.

Serve warm with a scoop of cool ice cream or frozen yogurt.

Variation: Once cool, add a basket of raspberries or blackberries, or sliced strawberries. Or cook the rhubarb with fresh cherries, pitted and cut in half.

(To make rhubarb curls, similar to the ones in the photo, the technique is explained in the first two weblinks.)