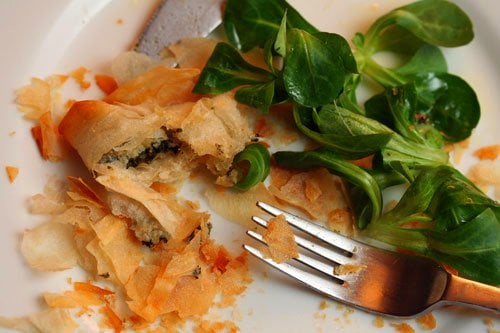 The most commonly-asked question for a certain cookbook author, aside from “Can I replace the corn syrup?” by a longshot, is: “Can that be frozen?”

So the fellow in question wrote an ice cream book, knowing that I—I mean, he would get a break from being asked that question. 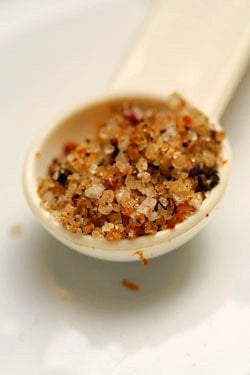 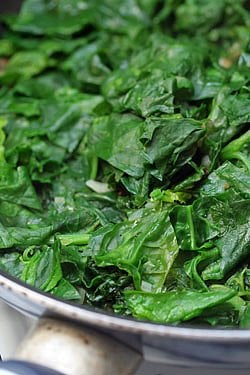 Because Sunday is the day my producteur of vegetables shows up at the outdoor market, I stock up for the whole week, although I don’t know what possessed me to buy a couple of kilos of spinach for just me last weekend. Probably because after all these years, I still have a hard time thinking in kilos, which is a little over two pounds.

Only when I get home do I think, “What was I thinking?”

Faced with way too much spinach, I tweeted and Katelyn twittered back with a one-word suggestion: Spanakopita. 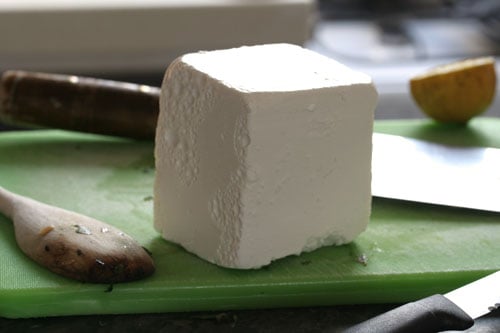 Bang! That was it. (And double-bang! Wasn’t that easy?) The following day I went to the Arab market and picked up feta and filo, in more reasonable quantities. Well, except for the feta, which I never mind having too much of.

I have a somewhat difficult time using filo because I used to buy freshly-made filo at Scheherazade, a place in San Francisco that made their own from scratch. Once you tasted it, you realized that the frozen or long-conserved stuff tastes like nothing and it’s impossible to go back. And it was a pleasure to work with, too, since their handmade filo not only tasted like fresh dough, but also didn’t dry out and fly away the minute you slid it out of the package.

Unfortunately, the bakery finally closed. An elderly Middle Eastern woman ran it with her husband, and he would effortlessly flick king sized, whisper-thin sheets of the dough with his hands over a big table while she worked in front of the shop. One day they told me they were calling it quits and retiring, and said their kids weren’t interested in taking over the business.

When I told them that I wanted to learn and take over the bakery, she laughed; “It takes five years to learn how to make filo dough by hand, you stupid idiot!” 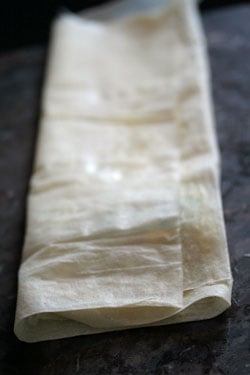 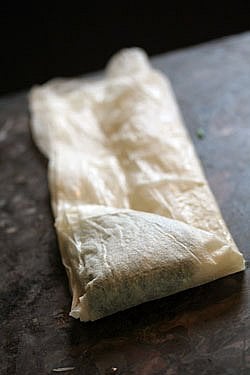 Ok, so she really didn’t call me a stupid idiot. But I feel like one because I chose another career path, depriving hundreds of thousands of San Franciscans without fresh filo. So although I specifically wrote an ice cream book just to avoid the “freezing” question, I should let you know that I rarely freeze desserts except in their raw or half-baked state, like cookie dough and crisp topping: I think if you’re going to make something buttery from scratch, it should taste freshly-baked when you stick it in your gullet. 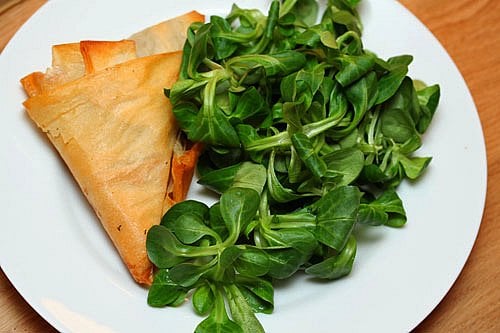 Although the preparation for spanakopita takes a bit of time, once done, you can keep a bag of the triangles in the freezer and when you need a last-minute dinner or lunch, just brush one or two with butter and pop them in the oven and thirty minutes later, you have a hot, delicious meal. Which isn’t a half-baked idea. Or is it?

I used a seasoned salt that a friend whose family harvests salt in Brittany made and gave me, which has dried tomato, garlic, coriander, and paprika in it. I don’t know if adding those spices will raise the ire of purists (who will rightly claim this is actually called spanakopitakia), but you can season the filling as you wish. You’ll see I like the addition of a squirt of lemon juice, which brightens the taste. Adding some freshly-chopped mint is another option. I also used 2 sheets of filo per triangle, since each sheet was about 12-inches (25cm), but if you prefer less dough, you can use one sheet. There are folks make spanakopita in a pie plate, although individual triangles give you more of the crisp-crunch of the filo, and are easier to freeze in individual portions.

Serve warm, with a green salad, or part of a Middle Eastern dinner with favorite side dishes. I like to eat these accompanied with Retsina, a Greek wine that’s an acquired taste, due to the resin-flavor. The Achaia Clauss brand is the one I prefer and is available in well-stocked liqueur stores. 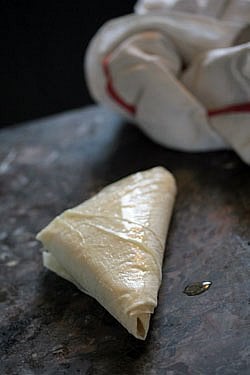