(I recent met Bryce Corbett, who wrote A Town Like Paris, a book about his life in Paris, where he found the girl of his dreams. Since he’s a terrific writer, I asked him to do a guest post, which included our visit behind-the-scenes at one of Paris’ most exciting attractions. -David)

There are many fringe benefits to being married to a Paris showgirl. 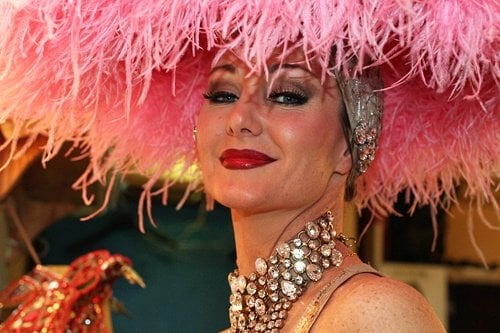 Great tables at exclusive restaurants, never being called upon to fetch that hard-to-reach bowl from the top shelf (have you seen how tall these girls are?) and always stepping out with someone who knows how to accessorize with feathers (truly an underrated virtue in a woman).

But it’s safe to say that the greatest fringe benefit to having a showgirl wife is also one that you’d probably least expect: She makes the most amazing cupcakes.

Now at first blush, you’d be forgiven for thinking that a woman who high-kicks on the Champs Elysées each night in feathers, sequins and not much else would have a natural aversion to baked goods. You would imagine that eating like a glutton and baking like a demon would be two practices well and truly off-limits to your average showgirl.

But then, this is the utterly infuriating thing about dancers—they eat like horses and rarely put on weight. 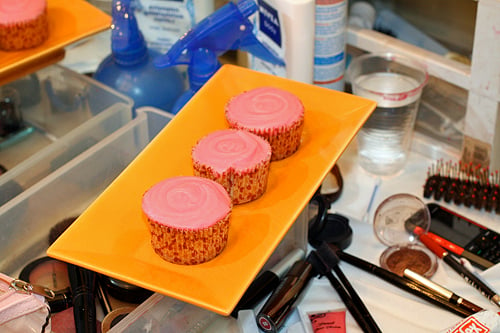 If you ever have the good fortune to pop backstage at the Lido (the famous Paris cabaret venue where my wife, Shay, plies her unique trade each night), you’re likely to be confronted by a food fest.

In the brief moments they are not running on stage in barely-there costumes, the showgirls and boys are usually busy eating. Lots. And I’m not talking carrot sticks and health bars. I’m talking potato chips, candy, cookies and whatever cream-filled creation one of them has whipped up in their kitchen that afternoon.

While the rest of us only have to think about a candy bar and it appears instantly on our hips, showgirls eat with impunity—scoffing every sweet thing they can wrap their painted lips around. 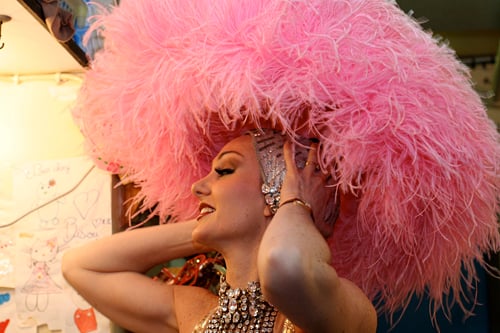 In fact, from what I have come to understand, the more butter involved in the making of any one single item of foodstuff, the greater the likelihood of it being consumed in excessive quantities by showpeople. It’s one of those laws of nature you rarely hear about.

As if to prove this theory, Shay and I took David backstage at the Lido, to give him a glimpse of the jewel-encrusted netherworld in which showgirls live and work – and to give Shay an excuse to whip up some of her trademark pink-frosted cupcakes. 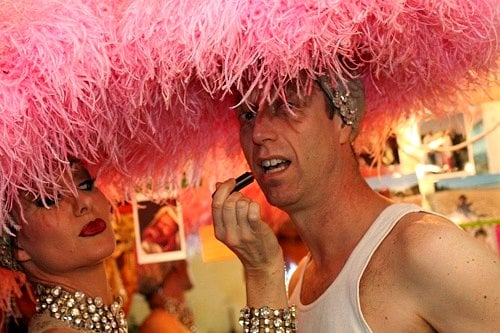 Once there, and surrounded by more feather backpacks, elaborate head-dresses and sequined thongs than you could poke a drag queen at, David discovered his inner-showgirl, donning some of the more over-the-top headwear and posing for the camera.

And gentle reader – while he may have the cheekbones to take to the Paris stage, I can tell you he definitely doesn’t have the legs. But that’s nothing he wouldn’t tell you himself, right David? 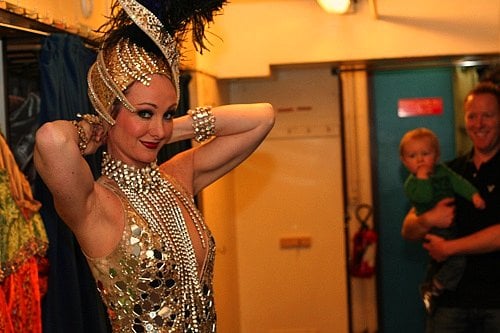 Hey, what’s wrong with my legs? Well, I guess compared to Shay’s sexy gams, he’s probably right…so I shouldn’t quit my day job. Big thanks to Bryce for sharing his wife’s cupcakes with us! (recipe below) -David

You can visit Bryce at his website Bryce Corbett.com. And be sure to check out his book, A Town Like Paris. 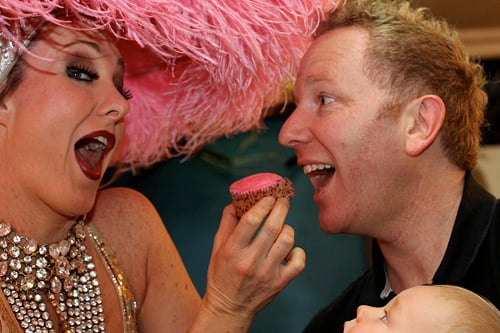 Adapted by Shay, from a recipe by Nigella Lawson
Servings 12 cupcakes 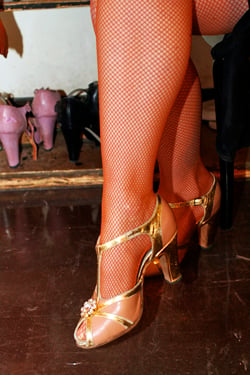 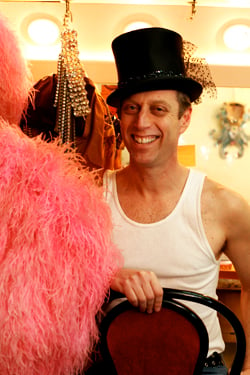