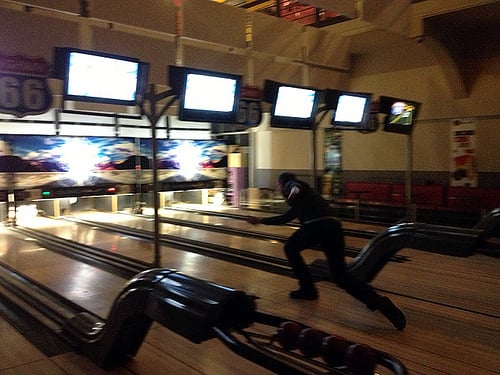 I had kind of a crummy day yesterday. I was invited to a restaurant opening that didn’t go as I had hoped. It was something that was a new concept for Paris, based on something uniquely American. And while people here are very good at embracing “concepts”, I almost felt the need to remind people that having a restaurant and serving food are about: 1) Serving guests, and 2) Having good food. Get those two down first, then everything else is gravy.

My initial clue should have been the people working the door. Their first question was – Who was I writing for? And then, Where was I going to place my article about them? (They seemed pretty disinterested that I had a blog…um, #egoshrinker) So after spending close to an hour sitting there, waiting, and watching the attractive young women next to me get their table set up with bread and different spreads, I decided to split because I had other things to do – namely, eat. So I stopped at Kayser bakery, picked up a loaf of levain bread and went home to make myself a grilled cheese sandwich.

(Interestingly, as I was leaving the other place, I ran into chef/owner Gregory Marchand of Frenchie who I told about my experience and I could see he felt my pain. Then mentioned he’ll be soon making similar items, and I was happy to know that I will at some point soon, I will be able to get my fix at his place.) 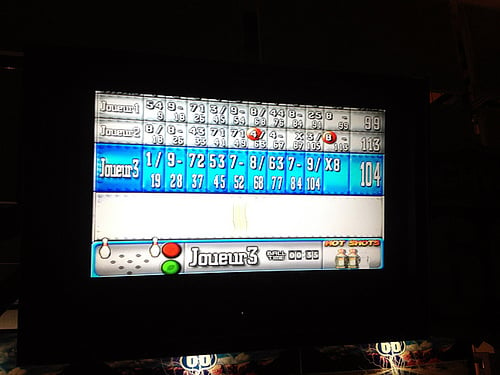 By the time I got home, I was upset and irked that most of my day was ruined. And while I had a few hours left to get some stuff done, it was already mid-afternoon and I was fuming so much that I really couldn’t think straight. But I was looking forward to dinner with some friends, and we met up for Middle Eastern food at a little joint I know of, where the fellows who run the place are super-friendly, efficient, and the food is pas mal. And in no time at all, squeezed into that basic little hole-in-the-wall, I was feeling better – with the Lebanese rosé helping – chatting and laughing with my pals. And then, we headed to do some bowling. 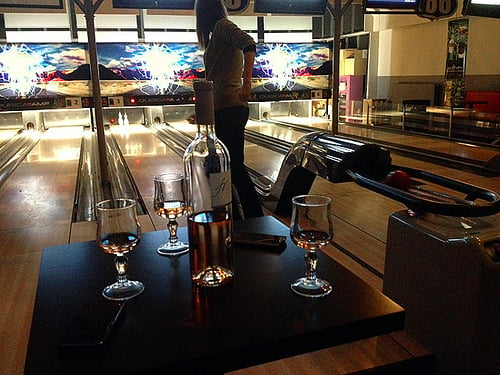 That’s right. Bowling. During one of the snowstorms, I’d gone for a walk, enjoying Paris blanketed with white, and passed a bar that had signs that inside were bowling lanes. So I made a mental note to go back, and was happy my friends were up for it when I mentioned it last week. And folks, let me tell you – no matter what kind of day you’ve had, put a bowling ball in my hand, and everything else seems to fall to the wayside. 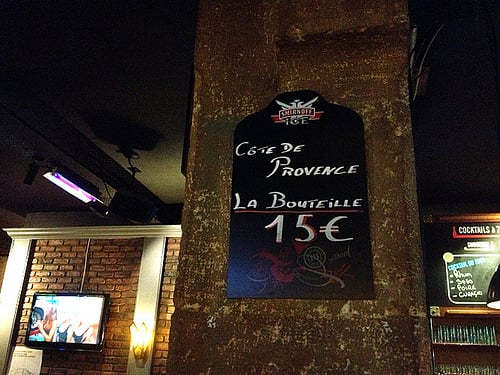 The electronic lanes cost €5 (and there is a breathalyzer machine on the way out, for 50 centimes, just in case you don’t want to take the métro home after you’ve had too much), and the friendly fellows behind the bar with sell you tokens to use in the machines. No special shoes are required (we missed the slippery glide they give you, which seems to make amateur bowling more fun), but with bottles of Côte de Provence rosé for €15 and a fun crew along for the ride, it’s hard not to have a blast. 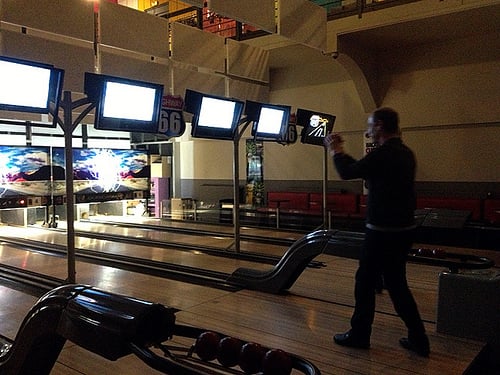 We weren’t sure what the French terms were for gutterballs or splits, and the computer scoring system was in franglais (not to brag, but I’m jouer number-2 on the scoring screen above, in the lead!), with an odd animated auto mechanic cheering us on. But bowling is one of the few things that the worse you are at, the more fun it is. As we rolled the grapefruit-sized balls down the lanes (and the inevitable adolescent jokes every time the screen let us know how much “ball time” we had left) the lousy day faded away. For just €5, I’d say that was one of the best deals in Paris. So wherever you are, have a good weekend – just watch out for those gutterballs! 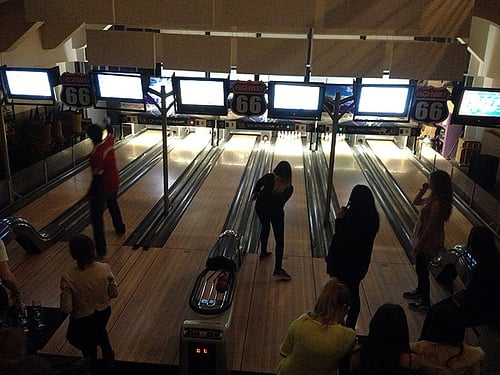