It’s not all fun and frolic—and chocolate—around here. Aside from dealing with banks that limit access to your own money, or scratching your head when the France Telecom representative tells you that it’s going to cost you a mere €465 to keep your mobile number if you change to another one of their other phone plans (although it was a stretch to even get there; his first response was, “Yes. It is not possible”), believe it or not, there are some less-than-pastoral things about life here. 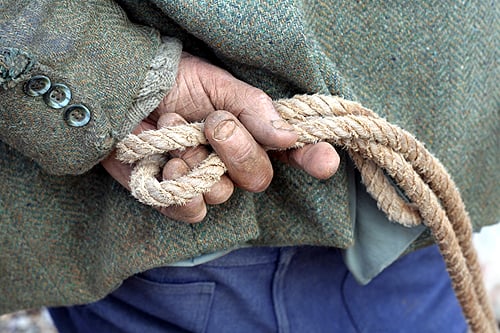 One of them is not Tuber melanosporum, or black truffles, which as far as I’m concerned more than makes up for anything else. (Well, I would like a new phone…)

Sure, various black truffles are found in Spain, Italy, China, Croatia, and even in the United States of America. But none that I’ve smelled compare to the famed black truffles unearthed from woods and forests of southwest France. Rien du tout. 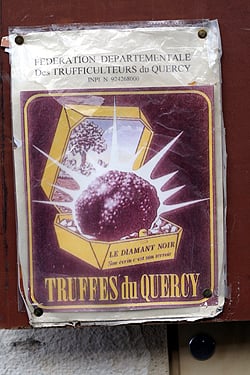 When I worked in the restaurant business, we’d often get knobbly black truffles sent to us, which were shaved over simple dishes like pasta, potatoes, and risottos; anything more complicated competes with their funky, pungent, but highly-prized aroma. People go ga-ga over truffles, but I never caught the truffle bug, which was excellent news for my wallet. 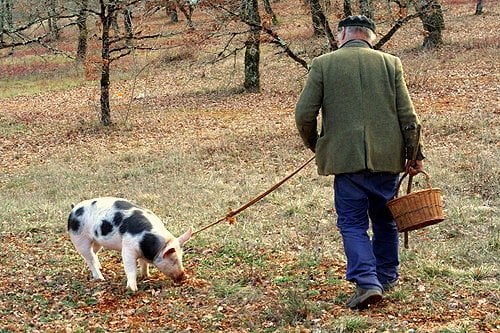 On my recent trip to Cahors, we went for a walk in the forest with a truffle hunter—and his boisterous pig, in search of black truffles. And it was there I learned how they work together to find these elusive tubers.

It was a very chilly winter day, so cold that even the leaves on the spindly oak trees were shivering. But that’s truffle season; January and February. And if you want to find truffles, they’re not going to land in your lap while sitting at home by the fireplace. One needs to roam through the forests, where the trees have been stripped nearly bare by the icy winds. And even though seasoned truffle hunters don’t require much protection, un certain Parisien was bundled up quite well for the search. 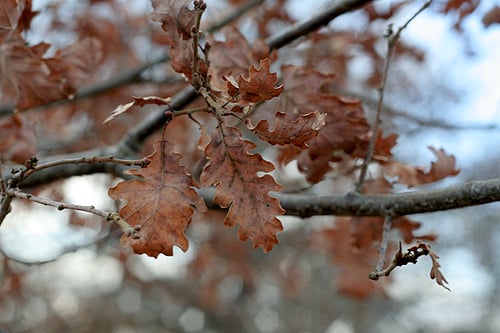 Because black truffles grow a few inches underground, unlike us, they’re impervious to frost. But that also makes them hard to detect. So truffle hunters use either dogs or pigs to find the elusive spores. 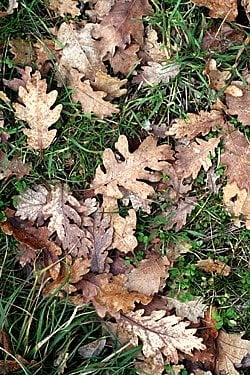 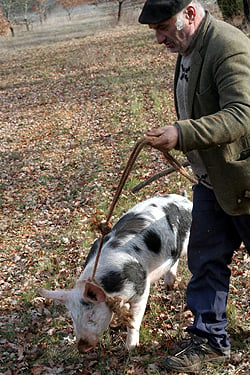 In the past, pigs were used almost exclusively to rout out the truffles. But in spite of how cute and picturesque the furry fellows are, for the most part, dogs have taken the place of the porkers. When a single truffle can set you back well over a few hundred bucks, even the most die-hard animal lover will agree that as much as we love our pets, very few people love them that much. As in, enough to sacrifice a few truffles for. 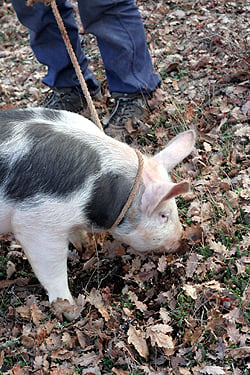 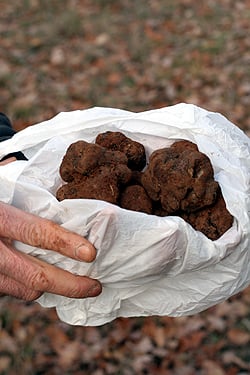 While adorable, pigs have a habit of eating the truffle once they unearth it. Hence the stick, which I didn’t see being used. And this particular hunter carried a running monologue with the pig as it scampered around, obviously thrilled to have a captive audience to his ramblings. The only mistreatment of the animal I saw was that he likely wouldn’t get a cut of the take once the truffles were sold. 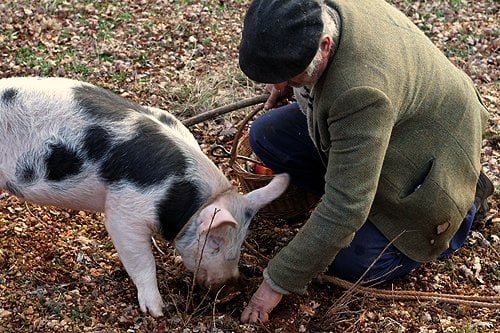 Still, in spite of the cold, I can think of a lot worse things than roaming around the forest, sniffing truffles. There was an obvious bond between the two, and the truffle hunter immediately sensed the moment the pig had found something because as soon as the pig buried its gueule in the rocky earth, he’d wait just a nanosecond before quickly swooping down and plucking the truffle from the hole before the pig could swallow it. The motion was so fast, that if you blinked, you’d have missed it. 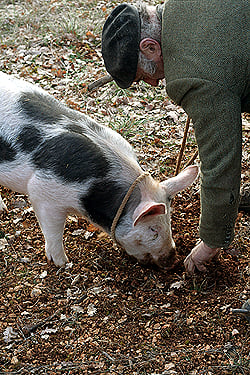 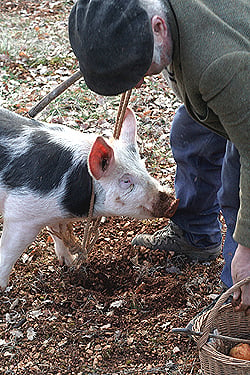 But lest you think the pig was being cheated in any way, as soon as the truffle hunter pulled the truffle a safe distance from the twitching snout, the pig made a mad grab for the basket, where an assortment of potatoes and apples were doled out as rewards. 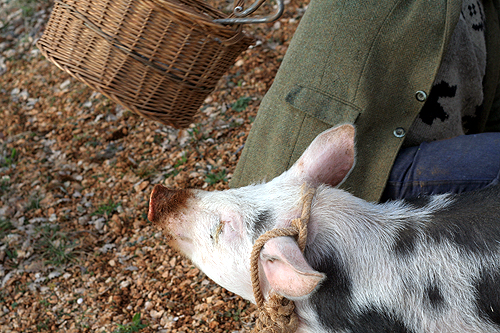 I doubt the pig was thinking how undervalued its labor was, and it seemed to be quite content. And once happily fed, le cochon scampered away, in search of the next truffle. 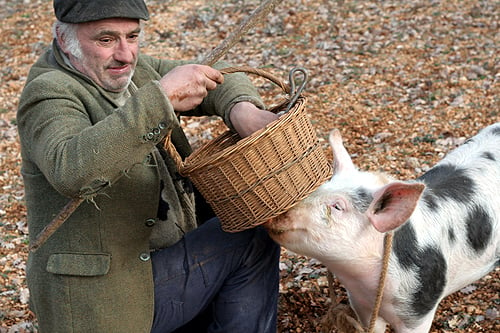 Unfortunately for me, the more truffles I sniffed, the more I became intoxicated by their musky scent, and started craving them myself. 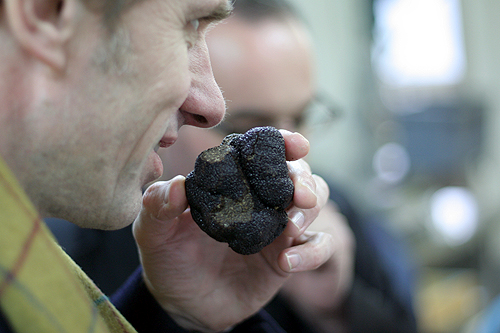 And while I wasn’t ready to scamper around the forest with my snout in the dirt on the end of a rope (those days are long behind me), after foraging, we were ready to hop over to the market in Lalbenque, to the world-famous Marché aux truffes, which began promptly at 2pm. 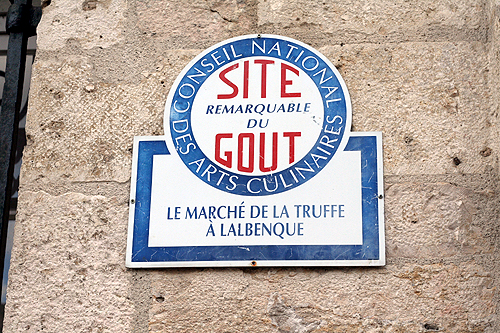 And that was where the buying and selling, and intense haggling, was about to begin…(continued)

The Truffle Market in Lalbenque (Part 2)

Grow Your Own Truffles (Woodlands)

Black Truffles of Périgord (in French)