What is a Bergamot? 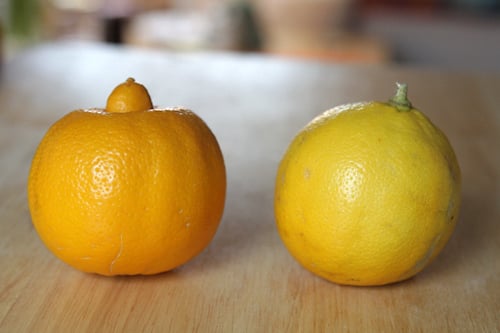 During citrus season in France, if you’re lucky, you’ll run across something called a bergamot. They’re not brilliant yellow like regular lemons, but a sort of orangey color, and when split open, they’re quite juicy and the flavor is much sweeter than regular lemons. In fact, they often call them citrons doux, which translates to “sweet lemons.”

Last year when I was making bergamot marmalade from them, which has become everyone’s new favorite marmalade around me, I was reading a little more about bergamots and some people who don’t live in France said that they tried using bergamots in various things and the flavor was so balmy and overwhelming they were hard to enjoy.

Rachel Saunders, in The Blue Chair Jam Cookbook, said that although bergamot marmalade was one of their most popular flavors, called the flavor on its own “completely overpowering and unpalatable.” 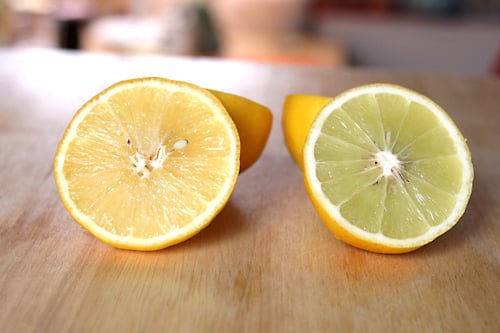 Scratching my head, when I was at the natural foods store last week, where I like to prowl for unusual citrus, just next to the regular bergamots I saw something I’ve never seen in France before: a box of yellow round fruits labeled bergamotto, from Italy. Much rounder and firmer, when split open (on the right), the pulp and juice were greenish and yes – tasted a bit challenging.

Determined to figure out what was going on, I did a bit of sleuthing around and found out that a true bergamot (citrus bergamia risso) is likely a derivation of a sour orange, thus the intense acidity. The fruit is valued in the perfume industry because the rind contains intensely flavored oils that have an elusive, yet slightly mesmerizing quality. And if you’re wondered what that unusual ingredient in your cup of Earl Grey tea was, that’s bergamot essential oil. They’re one of those fruits that you take a sniff of and are something you perhaps never smelled anything like it, but aren’t sure how you would use it. I made a vinaigrette with mine as a base, in place of the vinegar, and it was pretty delicious and I wonder if any readers have any other thoughts for using them? 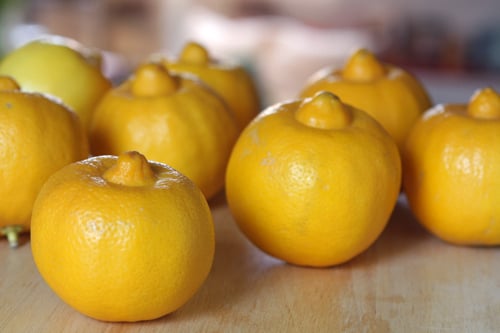 In France what are called bergamots, shown above, are also called citron beldi or limonette de Marrakech or Moroccan limetta elsewhere, and shipped from Tunisia or Morocco. Citrus limetta is a species of citrus often referred to as sweet lemons or sweet limes. According to the University of California horticultural website, Citrus limetta Risso (or what are called bergamots in France) “are sometimes incorrectly referred to as bergamots.” Mystery solved!