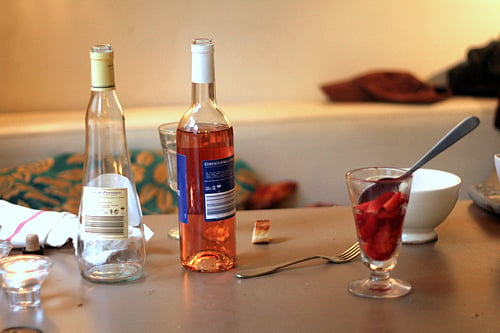 One of the things about the French that’s pretty well-known is that they certainly enjoy their wine. While statistics point to declining sales and consumption, I’d still dare to say that wine plays a very important role in French culture, as well as an integral part of its cuisine. And for that second one, I’m especially grateful.

I like wine, and being from California – and working in restaurants all of my life – I’m certainly no stranger to the pleasures of “the grape.” But even though wine has been simplified in America to boost consumption, such as wines with fruit-flavorings (I guess ‘grape-flavored’ wine isn’t enticing enough), there still is a bit of elitism associated with le vin. Yet in France, wine is no big deal and the wine aisle at the supermarket is just as big, if not bigger, than the mustard, coffee, paper towel, vinegar, sterilized milk, pasta, cereal, baby food, jam, and rice cake aisles – combined. It even threatens the yogurt selection in terms of scope, variety, and flavors.

Wine is also pretty inexpensive in France and the national average price that someone spends on a bottle hovers at around €3. In cafés, most glasses of wine cost anywhere from €2.50 to €5 or so, and it’s always a shock when I go to the states and order a glass, and when the bill comes, I realize I’ve just dropped $12, plus tax, plus tip. (I paid $24 for two ungenerously filled glasses of rosé at a casual pizzeria last time I was in the states. So I’ve learned not to rely on the server’s suggestion, and ask to see a wine list.) Because enjoying a glass of wine with a friend becomes a $30 proposition, it’s no wonder wine has a somewhat upscale reputation. Good grief, I’d be broke if I had to move back. But on the plus side, at least I could go back to enjoying my downscale reputation. 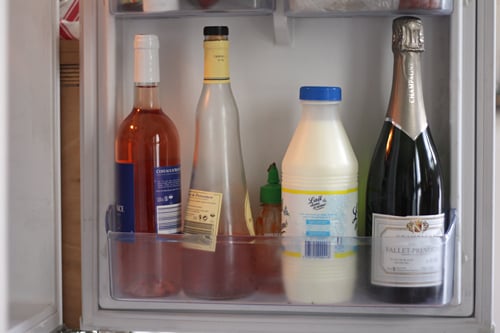 We have wine every night with dinner at home. Like all newcomers, after my first few months of living in Paris, I worried that I was developing a drinking problem because I absolutely had to have wine every night. I wasn’t drinking to get inebriated – although after spending seven hours looking for curtain rings (anneaux) yesterday, and realizing this morning that I needed to return the ones I bought and start all over again looking for exactly the right size for what I thought was a standard size curtain rod, that will probably change later this afternoon.

[Part of it is, admittedly, my own fault. For every little thing I need to buy, there’s a slew of new vocabulary, verbs, and type of shop that I need to learn about. And when I got overwhelmed by the intense heat and lack of ventilation at the BHV department store – which I am convinced the staff fiddles with to get customers to leave – and asked where the agneaux were kept, rather than anneaux, the saleswoman was within her right to look at me oddly since even though the BHV seemingly carries everything, they probably don’t have a section of the store devoted to lambs, or agneaux.]

My real problem with wine is that it comes in 750ml bottles, which is about 25% too much for two people to drink at dinner. After working all day (on things like tracking down a pack of stupid metal rings) I try need to wind down by dinnertime. But I also need to keep my head about me because after dinner, there’s often a flurry of requests from folks back in the states, who are just starting their day. (If you never got a response, blame the bottle.) 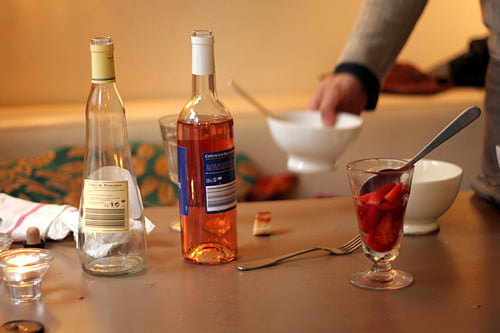 A while back, I saw wine in the grocery store labeled “Vin pour 2” in a slightly tapered 500ml bottle, which seemed like a good idea. Except it wasn’t very good wine and was priced a lot higher than similar (or better) wines, bottled in regular 750ml bottles. So we usually make it through three-quarters of a bottle at night before prudence rears her head and tells me to quit. However then the next night, there’s a quarter of a bottle left to finish, then another bottle gets opened, half of which gets consumed.

In the summer, when rosé is the wine of choice (as I’ll admit that it often is during the other seasons), I go “green” and often buy it by le cube (box). Some Americans sniff their noses at wine in a box, but they’re popular in France because, 1) They’re less wasteful, 2) They cost less, since you’re not paying for bottles, 3) The wine is generally of drinkable quality, and 4) It keeps the wine in less contact with air, which helps the wine keep longer. If you live near a winery in France, often people will bring their own jugs for refilling and I’ve seen people bringing in bidons, or the same plastic jugs used for gasoline (which I assume they’re not using for the same purpose, in between fill-ups.) 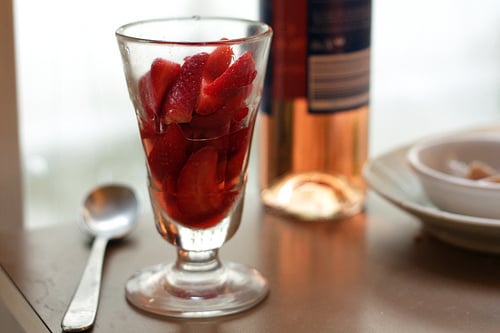 I’ve got a few recipes for using up that remaining 1/4 of a bottle, and now that it’s strawberry season, a more immediate solution is to pile some juicy berries into a glass and pour the leftover wine on top of them for dessert. It’s something I learned they do in Gascony, although when I do it in Paris, I get some pretty odd looks. But not only does it help to polish off the last 25% of the wine, it’s one less dish to wash. And it sure beats the looks I get trying to find a flock of sheep in the department stores.