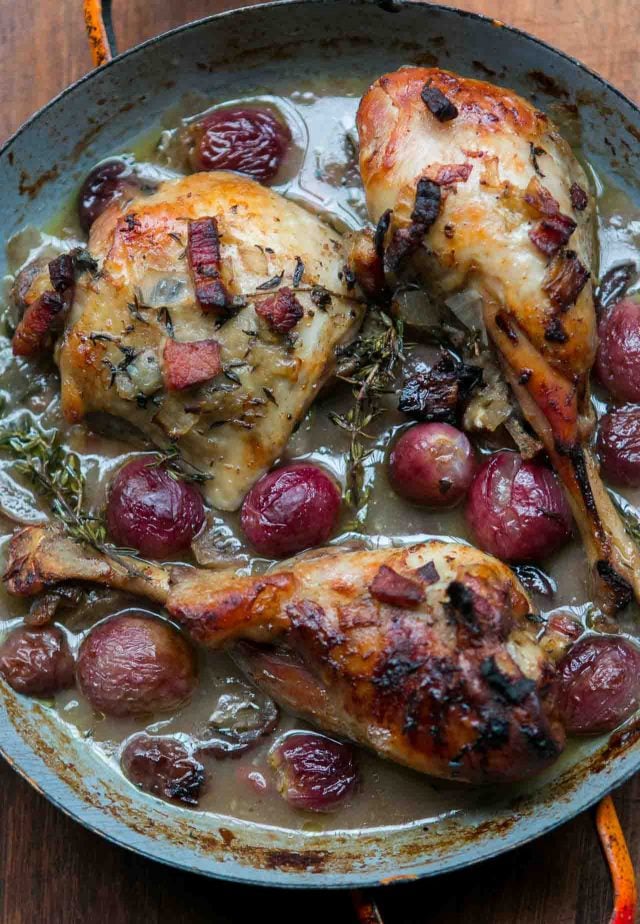 The French are big on braising. It’s a technique used to soften tough cuts of meat, which are often the most flavorful ones (and least-expensive), and traditionally, the ones French people liked to eat. But also during tough times, cooks would bring pots of food to their local bakers, who keep their ovens going while they were baking bread, and for a few coins they’d have them slow cook, or braise, their dinner for them. The iconic “P” in Poilâne bread is a nod to a similar tradition of people bringing their unbaked loaves of bread to a communal oven, and people would slash a mark in their loaves, or their initial, so they would know whose bread was whose, once all the loaves were baked. 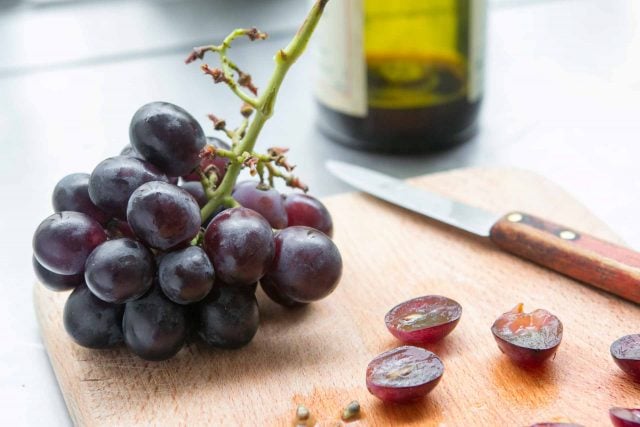 But I’m not sure this dish has roots in France. I haven’t seen many references to “harvester’s chicken with grapes” in France. A few searches for poulet vendageur aux raisins turned up some not-very-encouraging results. So it may be something invented by someone who romanticized something that’s less-than-glamorous, namely, grape-picking. But who likes chicken very much and decided to pair it with a big bunch of grapes, like I did. 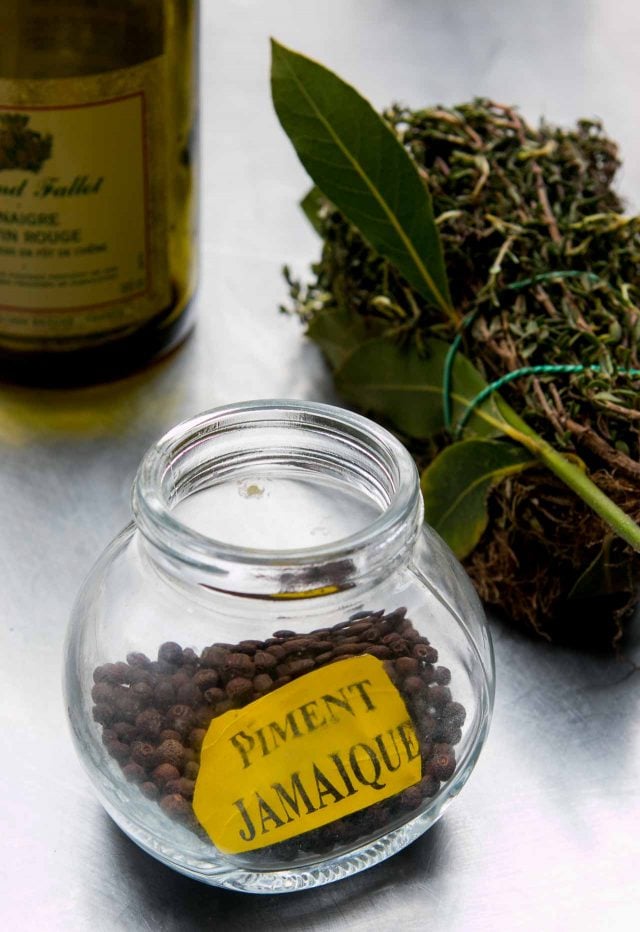 I’ve picked grapes a few times and after about 15 minutes in the hot sun of southern France, I was ready to call it a day and pop open a bottle of rosé, and drink it in the shade. I can peel apples for hours, segment oranges until the cows come home, and roll pastry like a champ. But picking grapes is very hard work.

Even if you’re not a vendangeur, or vendangeuse, or live in a grape-picking region, you can make this during other seasons, as long as there are grapes. Or if you live in part of the world where you have plenty of grapes to choose from at the moment, because the seasons are reversed from the other hemisphere, this recipe is to include you. And we all want to be inclusive, don’t we? 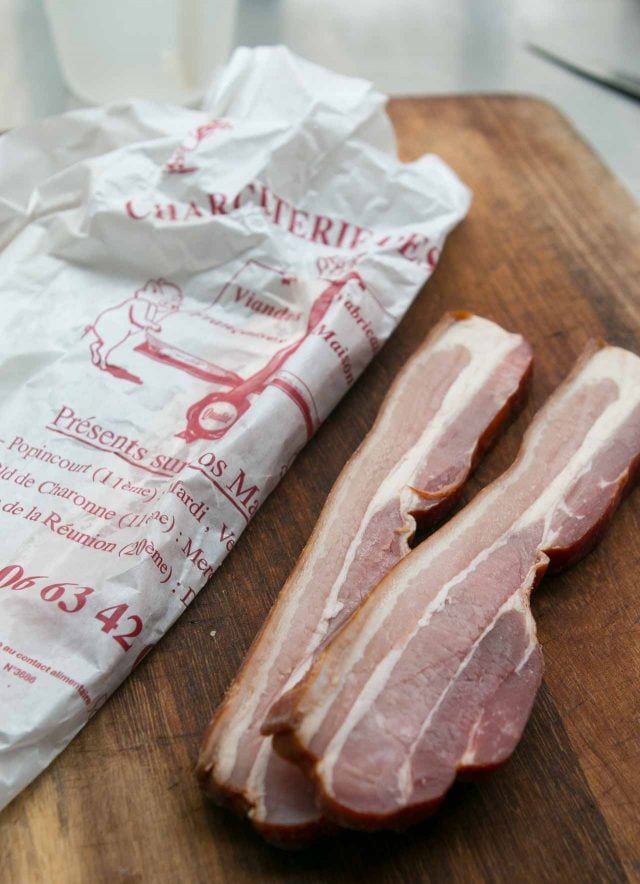 So while I’m happy to support the people who make wine by drinking—and eating—the fruits of their labors, when shopping for what to eat with some of the many bottles of wine I have tucked around my apartment, at my outdoor market the other day I chanced upon some plump, dark grapes and wanted to indulge myself in a braised chicken dish with morsels of smoked bacon and juicy raisins, as the French would say. And this is the result. (Not shown: Wine alongside.) 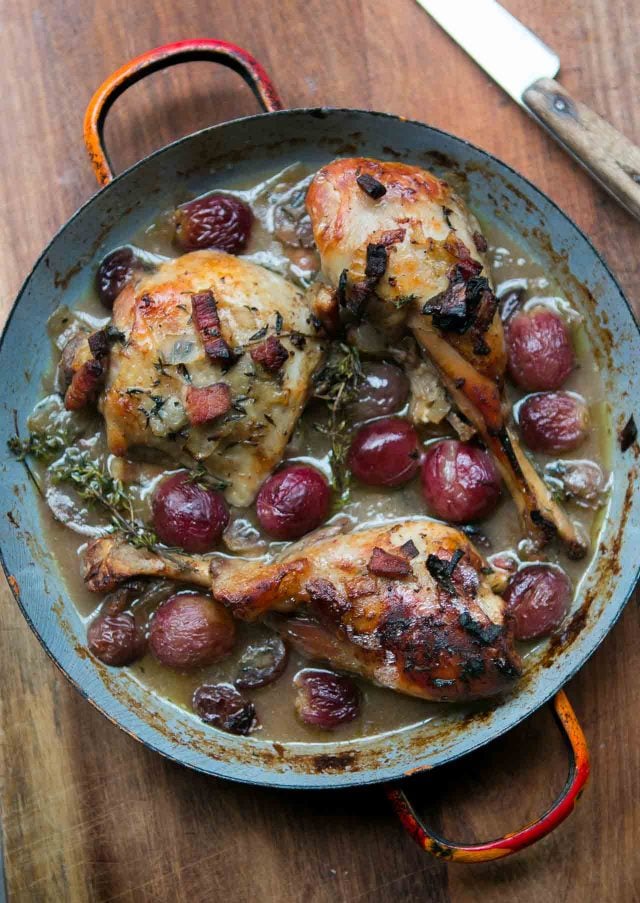 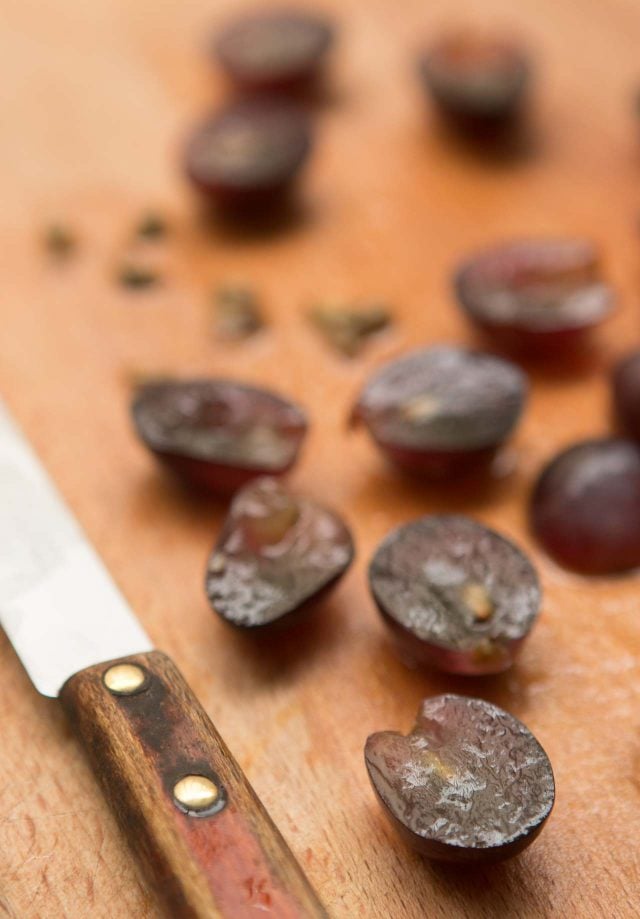 Seedless grapes are rare in France, and most people don’t mind the seeds. (Although they seem to be a little more refined about getting them out of their mouth than I am.) Wherever you are, find a grape variety that tastes good, if you can. In the U.S., Concord or Niagara grapes are very flavorful, or muscat. Of course, since this is a wine harvester’s meal, any grapes used for making wine are appropriate. But you could use Red Globe-style grapes, and count on the bacon-powered braising liquid to give them a boost of flavor. 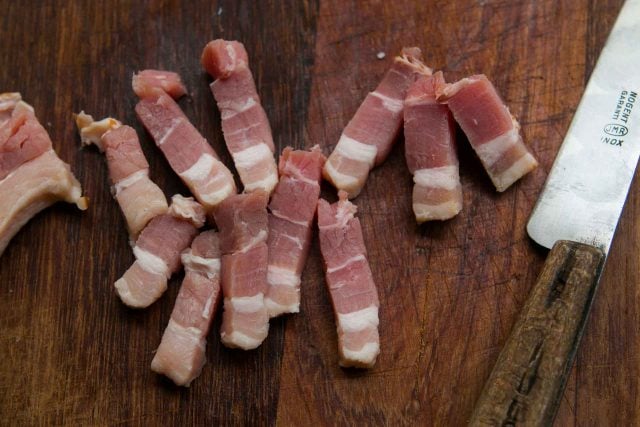 I did try this dish with seedless grapes, and vastly preferred the dish made with unseeded ones. Not just because I like to make a fool of myself trying to get grape seeds out of my mouth not-so-discreetly, much to the amusement of my French dining companions, who wonder if I was raised by animals and rescued by my parents when I was twelve. But I found the halved, seeded grapes got lost in the sauce.

(For the record: Emily Post said, when asked how you should remove food from your mouth, like seeds and fish bones: “With the same utensil that you used to put the food into your mouth.” Which makes sense, although grape seeds are a little tough, unless the tines of your fork are very close together, unlike mine.) 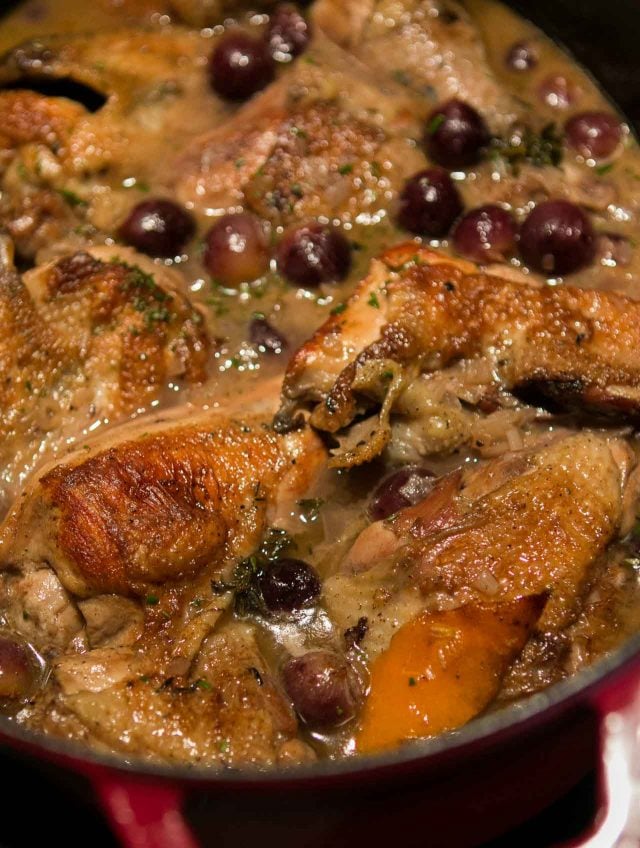 While we’re being honest, I like this dish the same day it’s made (above), but it’s even better rewarmed after it’s had time to sit in the flavorful sauce. I rewarm it in a shallow gratin-type dish with some of the sauce, for about twenty minutes in a 375ºF/190ºC oven, until it’s heated through and browned on top. Adding enough sauce at the start so the chicken pieces are halfway submerged is the right place to begin when reheating it. A quick flash under the broiler at the end will give the chicken pieces a nicer color. And if you’re anything like me – and I hope for the sake of your friends, you’re not when trying to extract grape seeds from your mouth, without drawing undue attention to yourself – you tend to watch things in the oven like a hawk, so do cook/broil the chicken pieces until they’re nicely browned, just the way you like them, with a simmering pool of the wine- and bacon-flavored sauce surrounding everything. 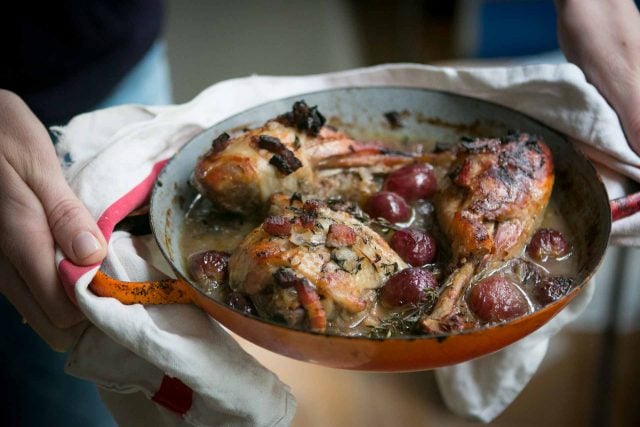 Use the most flavorful grapes you can find, such as muscat, Niagara, or Concord grapes, although it'll be fine made with regular store-bought grapes, too. If don't want to deal with seeds, you can halve the grapes and pluck out the seeds, or use seedless grapes. You can make this with a whole chicken, cut into 6 or 8 pieces, or 4 thighs (leg and thigh sections), cut in half, separating the leg from the thigh, so you have 8 pieces. I found the chicken was even better the second day, when I warmed leftovers in a gratin dish, uncovered in a moderate oven - about 20 minutes or so in a 350ºF/175ºC, then turning on the broiler to give the chicken some color. I like the curious flavor of allspice, but feel free to use another spice or seasoning that you think would compliment the fruity grapes, such as ground or crushed cardamom, cloves, or cinnamon. For those avoiding wine, you could double the amount stock and add a big squeeze of lemon juice.
Servings 4 servings

Serving: The chicken would go well with mashed potatoes, or another root vegetable puree, or wide noodles tossed in a little butter. Storage: The chicken will keep for up to three days in the refrigerator.
Pin10K
Share1K
Tweet
11K Shares