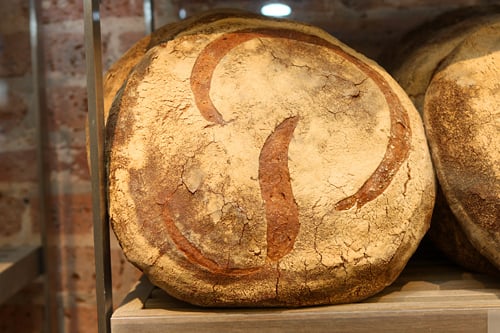 I don’t think about this so much anymore, but one of the reasons I moved to Paris is that I could, whenever I wanted to, go to Poilâne and buy myself a nice chunk of pain Poilâne. Just like that. Although I’m from San Francisco where there are quite a number of excellent bread bakeries, there’s something special about the bread at Poilâne – it has a certain flavor, just the right tang of sourdough, dark and husky but with an agreeable légèreté that makes it the perfect bread for sandwiches, to accompany cheese, or as I prefer it, as morning toast with little puddles of salted butter collecting in the irregular holes and a thin layer of bitter chestnut honey drizzled all over it. 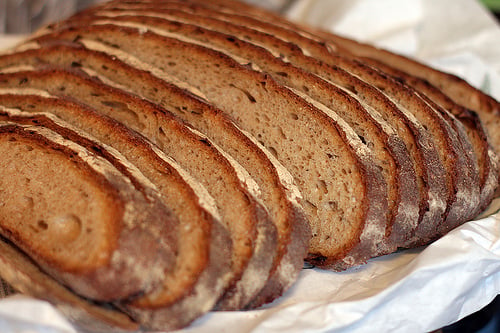 A week after I moved to Paris, a friend and I were invited to lunch with Monsieur Poilâne and his wife. Both were lovely people and Monsieur Poilâne was animated and still excited about the bakery he’d owned seemingly forever, which was (and still is) considered the best bread in the world. (I’ve never met a bread baker who didn’t use Monsieur Poilâne’s pain au levain as a reference point for excellence.) He took out a piece of paper and a pen, and wrote down a list of places that he wanted to take me, which I thought was odd – yet rather generous – since the man had just met me. 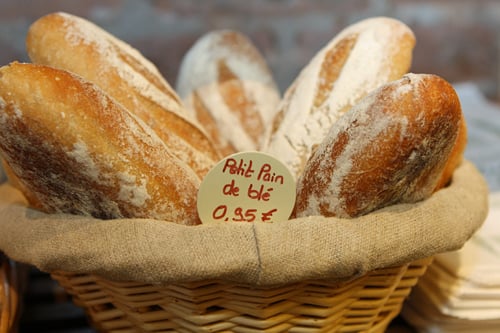 The following week, he and his wife passed away in an accident, which collectively stunned to food world, but the bakery is now run by his daughter Apollonia, who has done a little modernizing, while keeping the esprit of the bakery perfectly intact. It’s a tough call to try to preserve what makes a business special in Paris while at the same time making some updates. There’s a careful balance in Paris: You don’t want to lose what makes a place special, but on the other hand, things change (whether we want them, or not) and sometimes one needs to breathe a bit of fresh air into a place and nudge it forward. 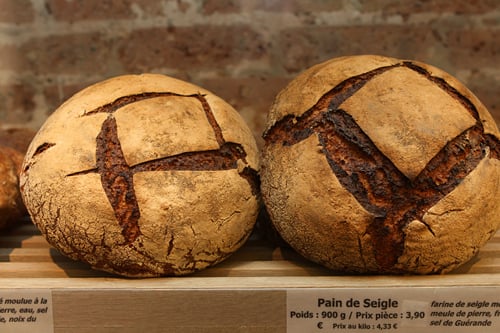 One of the reasons Poilâne was – and still is – such a great place is not just because they make terrific bread, but because of the staff. If you go into the busy main shop on the rue du Cherche-Midi, the staff is invariably friendly and accommodating. And when it’s time to go, the woman working behind the payment counter will offer you a little butter cookie from a baker’s basket, called a punition (punishment). Tip: The true fans pick the darkest ones and on the shelf where the bags are sold, there are always a few bags filled with what look to be practically burnt shortbread cookies. I like mine dark, but a few shades lighter. 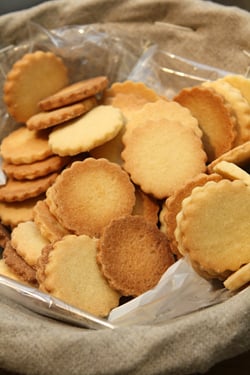 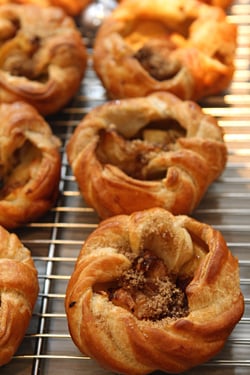 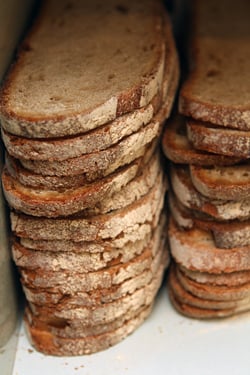 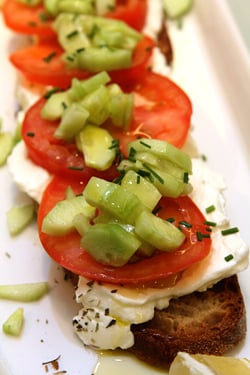 Interestingly, the price for this spectacular bread is still some of the most reasonable anywhere and a quarter of a loaf costs less than two euros and is enough to last me two-to-four days. (I’m always surprised when they weigh it and tell me the price, and I think, “Could that really be all that it costs?”) The bread lasts at least a week and gets better as it sits; the sourdough flavor gets deeper, and while it loses some of its springiness, it’s a perfect foil for a swipe of crunchy peanut butter or a chunk of Comté cheese.

Many cafés in Paris offers two versions of the croque-monsieur, one made on standard white bread, the other, with pain Poilâne. Aside from saving maybe a bit of pocket change, I’m not sure why anyone would choose the white bread, when they could be eating a warm ham and cheese sandwich on wood-fired Poilâne bread. 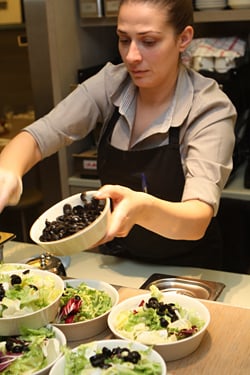 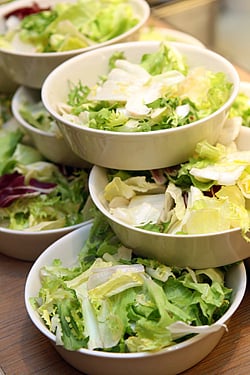 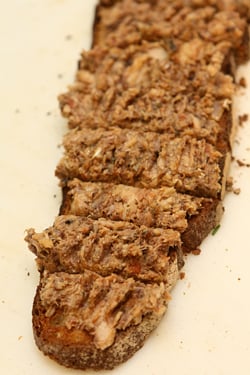 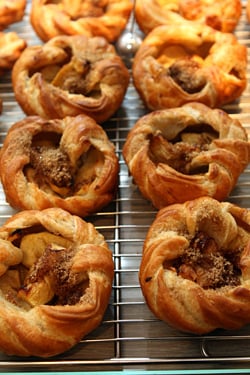 But there’s no choice of bread at their café, they just have the good stuff at the tartine bar just next to the bakery, which is open early for a morning bowl of café au lait with toast…through later in the day, shoppers and regulars who work nearby to mingle on the iron stools, eating the various tartines (open-faced sandwiches) that go in and out of the blazing-hot broilers all afternoon long. 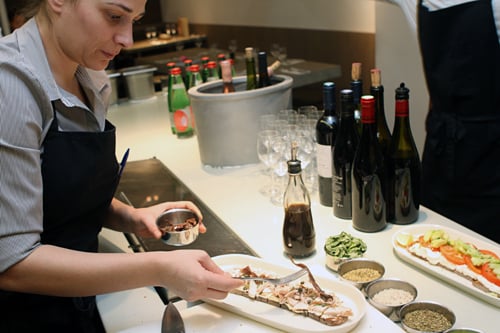 When it does get crowded at lunchtime, it’s not uncommon to have the fellow at the door offer you a glass of wine if you’ve been cooling your heels a little too long. It’s one of the few places in Paris I’ve ever been offered such a gesture, and that’s completely indicative of the kind of care they give to guests. In all the years I’ve been going to their shops, I’ve never had anyone wait on me who wasn’t friendly and efficient, and personally proud of what they were serving forth. 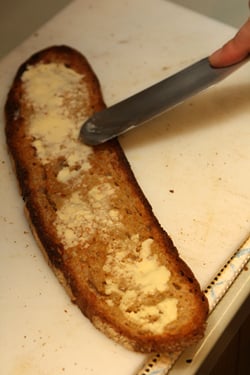 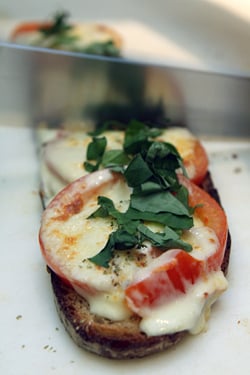 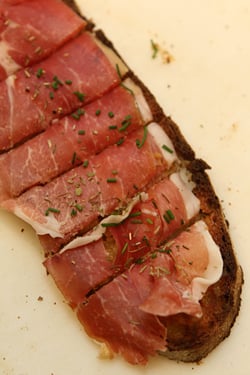 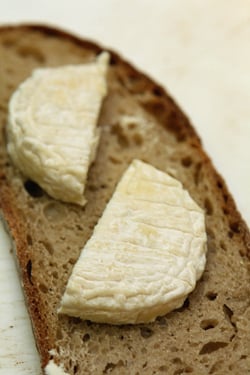 Unlike other places that discourage guests from looking around, perhaps snapping a quick picture, or hiding what they do, at Poilâne it’s possible to go see the enormous wood-fired oven downstairs (although arrangements now need to be made in advance, since the bread bakers were having trouble getting all their daily loaves baked off with us bystanders poking around down there) and you’re welcome to buy one slice of bread, or a whole loaf, sans problème. 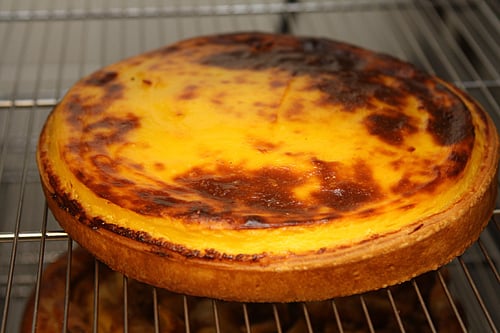 Poilâne isn’t necessarily a sweet shop, but they do make a classic flan, a Breton-inspired custard tart which is a local favorite afternoon snack in Paris. And if you have lunch or dinner at their Marais location (where even the lamps are made of sculpted bread!), if you’re lucky, they’ll have a tray of Paris-Brest from Jacques Genin, made just up the street. 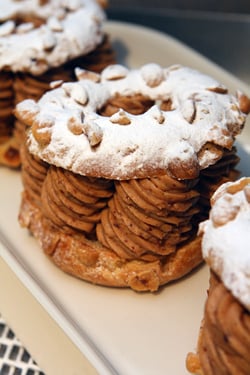 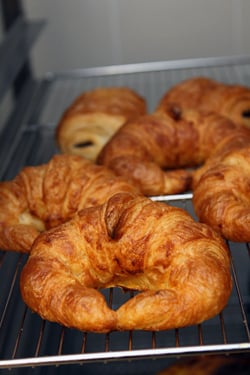 Named for a famed bicycle race between Paris and Brest, the ring of pâte à choux is meant to resemble a bike wheel and its interior gets filled with rich hazelnut-praline cream. I dug into one of these a few months back and had to stop eating for just a moment to let it sink in how good it was. I’m going to go out on a limb here – albeit a pretty solid one – and say it’s the best dessert in Paris, and just looking at the picture makes me want to stop writing at this moment and race on over there by bicycle myself.

Not quite as rich, I am also crazy for Poilâne’s apple tartlets and I insist that people who have never tried one do so, no matter how unassuming they might look. You can’t take it home because the minute it hits the paper bag it gets folded up in, the flaky crust starts leaving its buttery mark and will get over anything it touches. So just go outside and eat it right away. (You won’t get scolded for eating on the street in Paris, because everyone understands.) It looks deceptively simple and is pretty compelling evidence of how just a few ingredients – puff pastry, slices of apples, and dark cane sugar – can create a spectacular pastry without all the fuss. 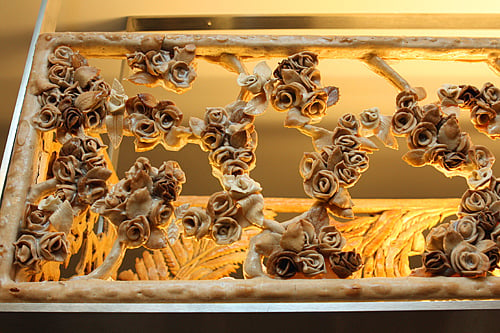 Nearly all the women who work in the shop have been there since I’ve been coming to Paris, and when I went to their newest location in the Marais, I recognized a saleswomen who’d been at Poilâne for twenty-six years, from their Left Bank shop where I used to bring them brownies, for some reason. (Which might seem odd considering that they were surrounded by some of the best baked goods on earth. But on the other hand, they remember me well.)

Adjacent to the dépôt de pain (bread counter) is the Marais branch of their café. And just like their Left Bank address, a lone woman is stationed behind the counter and forms a one-woman assembly line, a vision of efficient organization, feeding an entire restaurant of people without breaking a sweat. 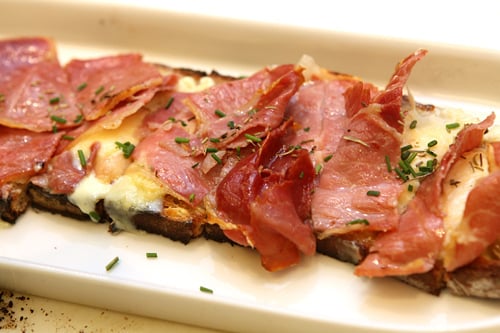 When people criticize French service (which can be hit or miss), seeing how one person can feed an entire restaurant, or when two servers take care of a packed dining room, I laugh when I think about the layers of servers elsewhere in the world – busboys, hosts, waiters, and runners, all scrambling around, jumping over each other, to get the food to the tables. Patricia, who was making the sandwiches, calmly smeared bread with mayonnaise, then draped it with moist chicken breast slices, a few salt capers and curls of anchovies, then cut it into bites, slid it onto the plate, and off it went. Basta.

I haven’t tried the tartine for le régime (the diet), with fromage blanc, tomatoes, and diced cucumbers, but my previous favorite is the simplest they make: crisp bâtons of pain Poilâne spread with sardine paste, good olive oil drizzled over the top, and a sprinkling of chives. But she offered me a taste of the one which she said was their all-time most popular sandwich. 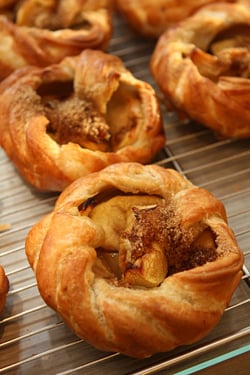 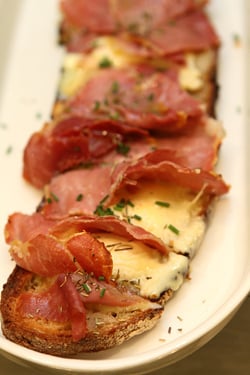 Patricia took a small round of soft Saint-Marcellin cheese, cut it in half, and pressed it into the bread, then topped it with lacy Bayonne ham. After it had been under the hot broiler for a few minutes, she pointed to it – “When the sides of the ham curl up and get a little crispy, that’s when it’s ready. It has to be like that. Then it’s so good!” With apologies to the sardines, she was right. 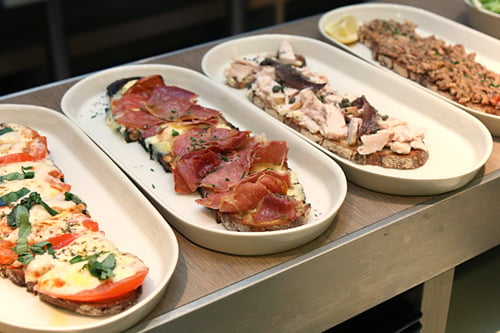 If you hit one of the two restaurants for lunch, you can order the formule, which includes a small green salad, a tartine, a bottle of water or a glass of wine, and a coffee and little cookie. It’s one of the best deals in town (currently around €14), especially considering the top-notch quality of the food. And, of course, the accommodating people, who make it happen at Poilâne.

[UPDATE: Poilâne changed the concept of their café on the rue du Cherche-Midi and is now Comptoir Poilâne, serving different menu items than what is shown in this post.)

(Two other Poilâne shops include 49, boulevard de Grenelle in Paris [15th], and in London, at 46 Elizabeth Street.) 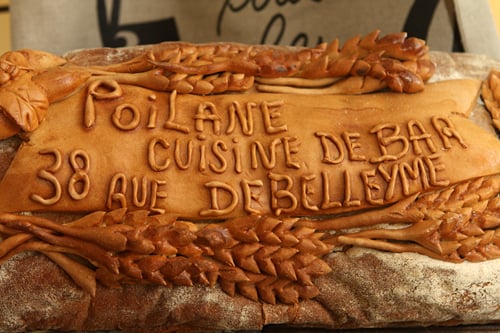 Behind the Scenes at Poilâne Bakery (Ann Mah)

Give Us This Day Our Global Bread (Fast Company)