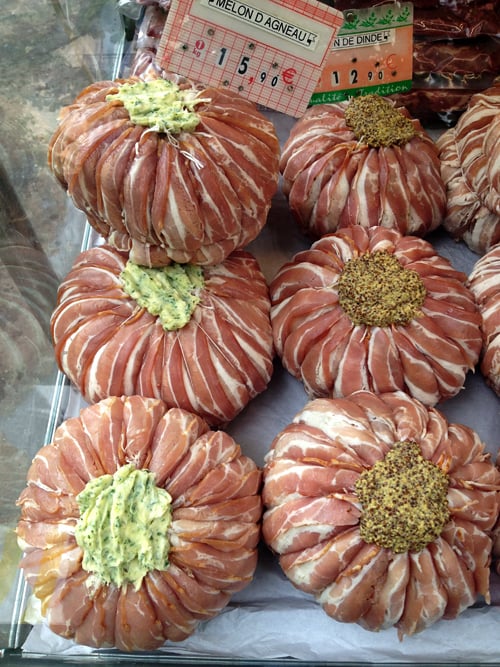 I was walking down the Avenue Trudaine the other morning, on the way to Kooka Boora for yet another coffee, and they were setting up for the small afternoon market there. Most of the markets in Paris take place in the mornings, which means that people who work don’t get to go to the market except on weekends, when the outdoor markets can resemble the trading floor of a stock exchange. So it’s nice that a few of the markets in the city are open in the afternoons and early evenings, to accommodate those people.

The Marché d’Anvers is a rather compact market, with a few fish stalls, a bread stand, and some vegetables. There is also a butcher that has a very, very long refrigerated counter, which I scanned. I don’t know all that much about meat but I like to look at it. (And, yes, the swarthy butchers are often worth scanning as well and unlike other vendors at the market, women seem to be particularly attracted to them. And even the most reserved Frenchwoman seems to get reduced to a smitten schoolgirl when it’s their turn with the butcher.) When I reached the end of the showcase, I noticed a pile of something called Melons d’agneau. 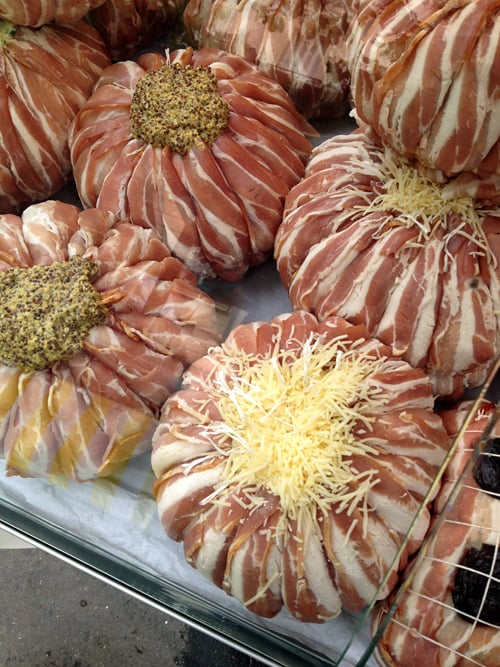 These “Lamb Melons” reminded me of tufted cushions, made with what looked like slender strips of fat-marbled lamb. Some were topped with handfuls of grated cheese and other had what looked like a farce, or stuffing, crammed in there. I don’t know what was inside, but am guessing a core of seasoned ground lamb. And you probably pop the whole thing in the oven and let it roast until it’s cooked through.

Taking pictures in Paris can be a dicey proposition (I once asked about taking a picture of a nice-looking bunch of carrots at a market, which launched a discussion that required three people to discuss and determine whether or not I could) but Romain said, “He should be proud of his work.” And indeed, the butcher deserves kudos for whatever he did to craft and coax lamb into these shapes.

I did a little searching around online for images that matched melon d’agneau (and no, not anneaux), and found a few specimens that looked more like what are sometimes called paupiettes, which are stuffed meats often tied up into a nice, tight round bundle, the meat bulging like melon sections between the strings, ready to take home and roast off. Weighing in at what I’m guessing to be around two kilos (4.4-pounds), I’m not sure how many people each melon will feed—but for two, that’s a whole lot of lamb. And a whole lot of leftovers.

Update: I cooked one!