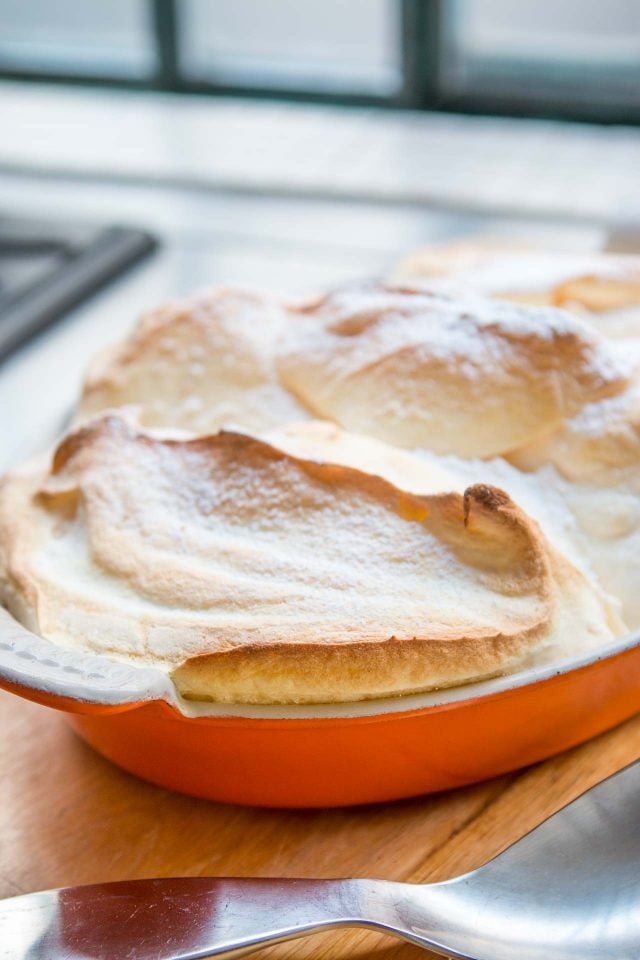 When I saw the cover of Alpine Cooking, before it came out, it quickly rose to the top of the list of books I needed to get my hands on. I was fortunate to get a preview when I was asked to write a quote for the book jacket, and was thrilled to find the inside of the book was even more compelling than the cover. While it’s hard to compete with the Matterhorn, pictures of locals contemplating a melted cheese sandwich, or a wooden châlet terrace with place settings soon to be heaped with hearty mountain fare, brought the alps right to me. 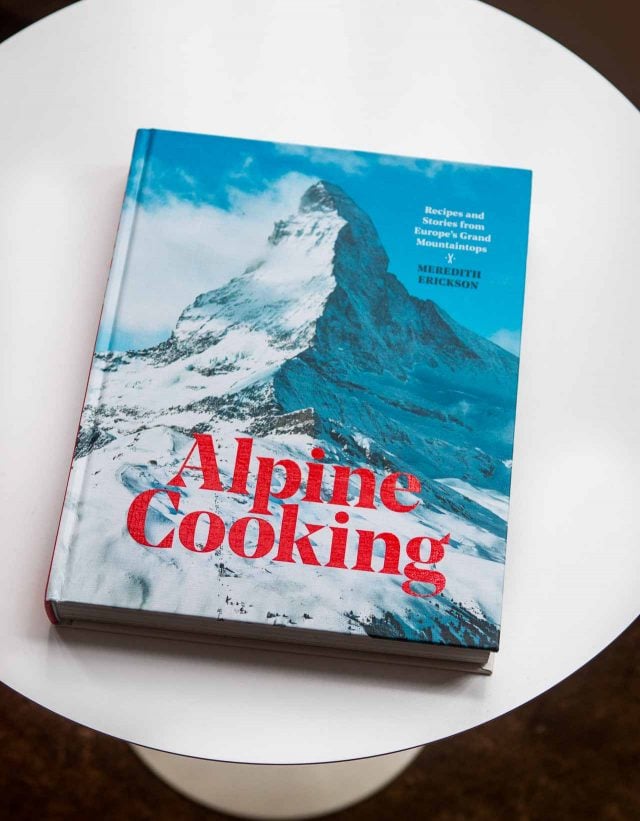 Covering Italy, Austria, Switzerland, and France, author Meredith Erickson, takes us through cheese caves, ski slopes, restaurants, fondue pots, snow-caked ski boots, and villages, that are all part of the European alps. As Meredith noted in the book, in the winter, if you’re cooking in the alps, there isn’t a lot of fresh produce available in the winter. In fact, there may not be any at all. (Those who live in winter climates, who shop their local farmers market can relate to five months of squash, potatoes, and onions.) So jam fills in. 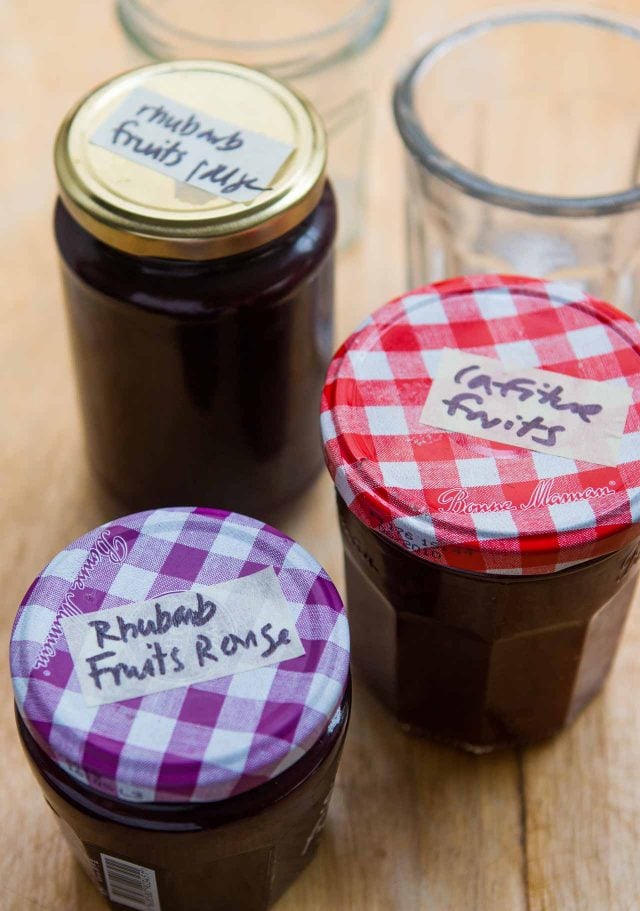 I had a fantastic Salzberger Nockerl at Bâtard in New York City last year, where Julie Elkin‘s clouds of meringue swooped and swirled marvelously over a compote of gently cooked, but still fresh-tasting, strawberries. So I am excited to find a recipe in Alpine Cooking from the Bärenwirt Tavern in Salzberg that I wanted to try. 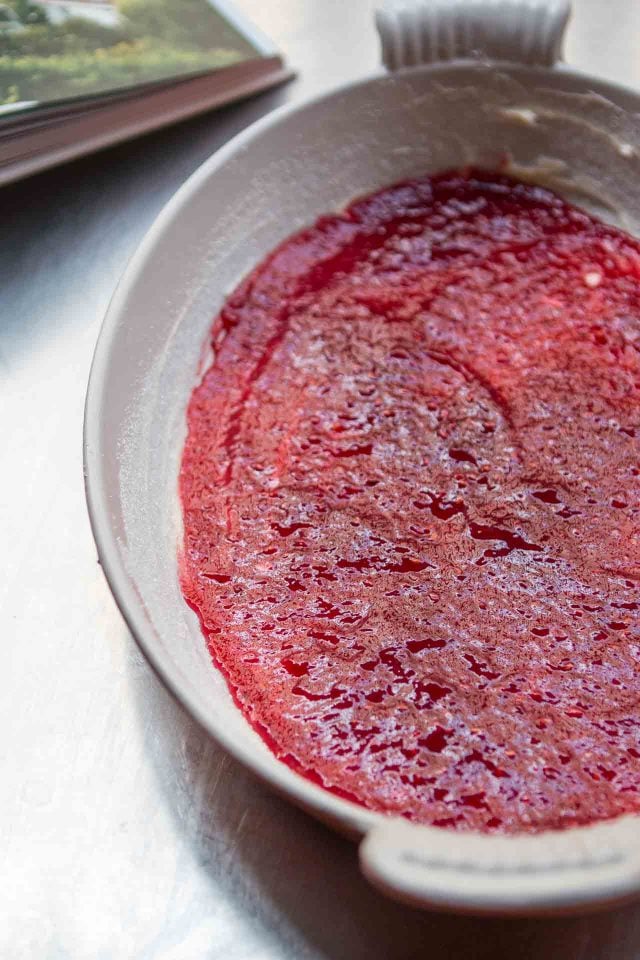 Some recipes for Salzburger Nockerl have you make a fruit compote, then bake the meringue in a baking dish, and serve the fruit compote or sauce on a plate with some of the meringue. This recipe has you bake the meringues over jam, which I have no shortage of, but I didn’t have the cranberry jam that the recipe advised, and that I’ve seen other European recipes call for, which I assume are actually lingonberries, since cranberries ain’t easy to come by in Europe, especially in the alps. (Unless they have cranberry bogs up there!) 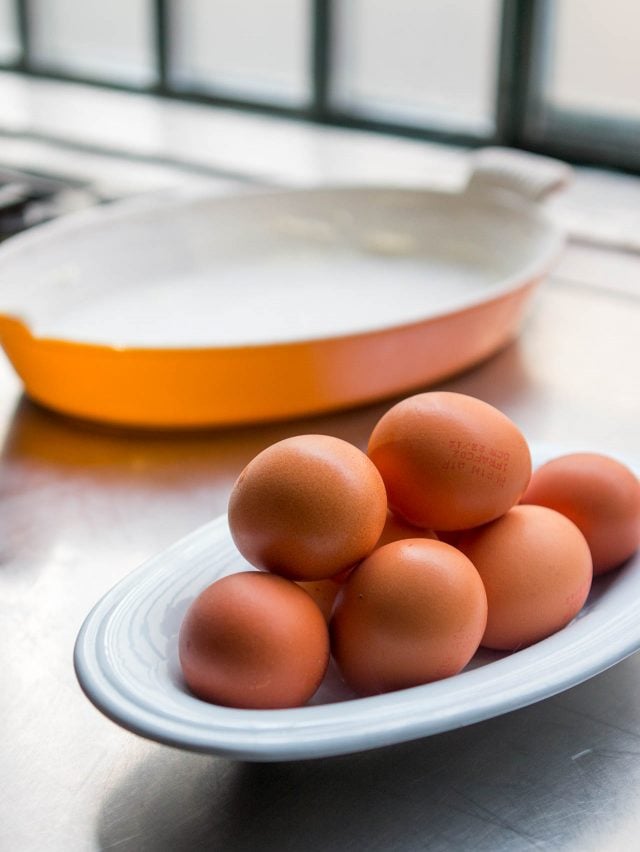 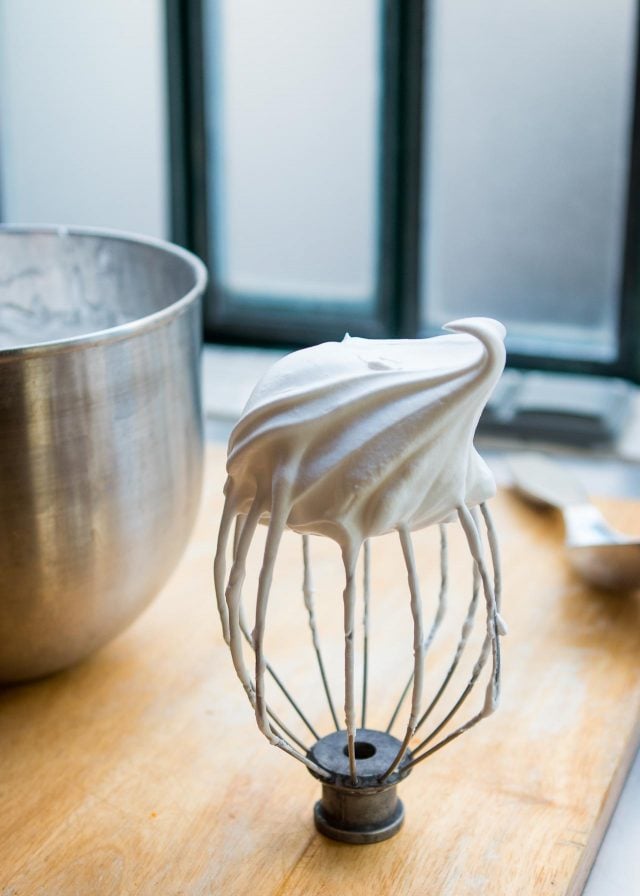 You want to use a strongly flavored jam, preferably one that leans toward the tangy side, made with something red; raspberry, strawberry, rhubarb, etc. would be my preference, to contrast with the sweetness of the meringue. I did omit the 1/2 cup (125ml) of milk in the recipe, that gets poured over the jam before it’s topped with the meringue since I didn’t need any more liquid underneath the meringue, preferring to focus my thoughts, hopes, and snow-capped dreams, on the fruit jam peeking out underneath. 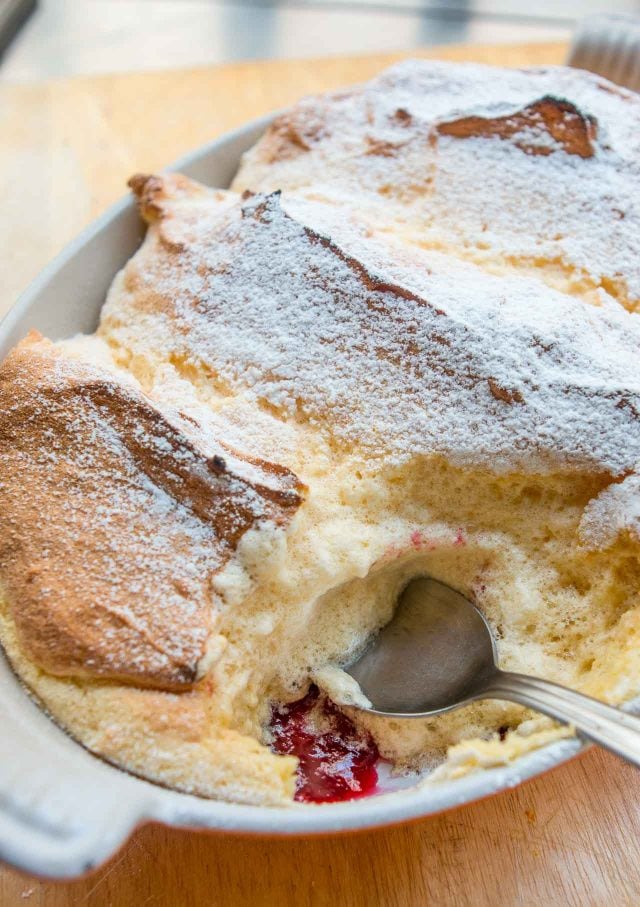 Another thing I tried was waving a blowtorch over the top after it was baked because I love burnt meringue. One of the peaks caught on fire (hey, you try holding a torch to brown a meringue while trying to snap pictures of it…) so I wasn’t as successful as I thought I’d be. But if you like extra-brown meringues, you could give that a go, or turn on the broiler during the last minute or so of cooking. And if you make this dessert (especially if you manage to be successful using a blowtorch which taking a pic), feel free to brag, and tag me at @davidlebovitz and Meredith at @mereditherickson on Instagram, so we can take a look. 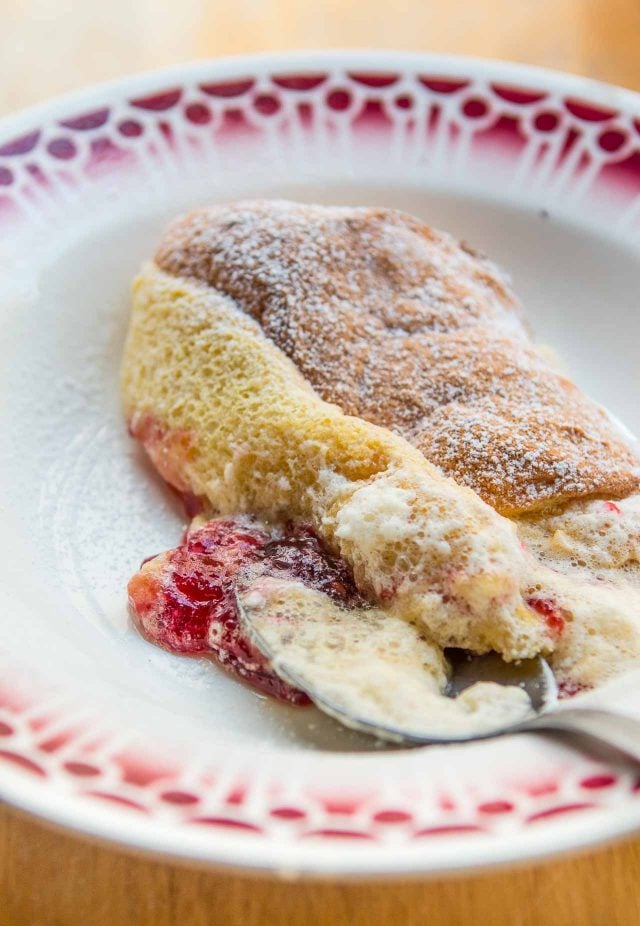 Adapted from Alpine Cooking; Recipes and Stories from Europe's Grand Mountaintops by Meredith Erickson There are a variety of ways to make Salzburger Nockerl. This one is from the Bärenwirt Tavern in Salzburg. If you're the kind of person that likes desserts heavy on the meringue, like Île Flottante or Floating Islands, this dessert is for you. Europeans don't traditionally use vanilla extract, as Americans do, preferring to either use vanilla beans or vanilla sugar, which is sold in little packets. I do have a little jar of sugar that I stick used (rinsed and dried) vanilla beans in, which worked fine. Meredith says you can scrape the seeds from one vanilla bean into the 1/2 cup (100G) of superfine sugar and let it infuse a few days. I tried making this with pure vanilla extract, and it worked fine. Feel free to use that, or vanilla bean paste. Superfine sugar is sometimes called "baker's sugar" (in France, it's called sucre en poudre). You can make your own by whizzing granulated sugar a few times in a food processor or mini-chopper until the granules are quite fine, which'll just take a few pulses. Lastly, I skipped adding milk (1/2 cup, 125ml), which the original recipe said to pour over the jam, before topping with the meringue prior to baking. I found it a little too liquidy. Also I baked mine longer than the 9 minutes indicated by the original recipe. I don't mind runny soufflés, but mine was cooked to my liking at around the 13 to 14-minute mark.
2 tablespoons butter, salted or unsalted, at room temperature
2 tablespoons granulated sugar
2/3 cup (200g) red fruit or berry jam
6 large eggs, separated, plus 4 egg whites
big pinch kosher or sea salt
1/2 cup (100g) superfine sugar (see headnote)
2 teaspoons vanilla sugar, or 1 teaspoon pure vanilla extract or vanilla bean paste
1/3 cup (scant, 35g) flour
powdered sugar, for garnish
1. Butter a 2-quart (2l) gratin or baking with the softened butter. Sprinkle the granulated sugar in the baking dish and tilt the dish, so the sugar coats the bottoms and sides of the dish. Spread the jam in an even layer over the bottom of the dish and place the dish on a baking sheet. Set aside.
2. Preheat the oven to 375ºF (190ºC). Set the oven rack near the top third of the oven.
3. In the bowl of a stand mixer, or by hand in a large bowl and a whisk, beat the egg whites on medium speed with the salt until they're foamy. Increase the speed to high and continue beating until the egg whites start to hold their shape. While the mixer is running, or while whisking, gradually whisk in the superfine sugar, continuing to whip until the meringue is smooth and glossy. Near the end of the whipping, beat in the vanilla sugar or vanilla extract or paste.
4. In a small bowl, beat the egg yolks with a fork until liquidy. Using a whisk, gently, but thoroughly, incorporate the egg yolks into the egg whites, making sure to reach down to the bottom of the mixing bowl so everything is incorporated. Using a flexible silicone spatula, sprinkle the flour over the meringue while gradually folding it in, making sure (again) to reach down to the bottom of the bowl so everything is completely combined.
5. Using a plastic bench scraper (or a flexible spatula) lift out one-third of the egg mixture forming it into an oval shape using the rounded curve of the inside of the bowl, to help you form the oval. Place the oval on one end of the jam-covered baking dish. Make another oval mound with half of the remaining meringue and place it on the other end of the baking dish. Finally take the remaining meringue and place it in the middle of the baking dish. You should have three large, oval mounds. (Although don't worry, it doesn't need to look perfect.)
6. Bake for 11 to 14 minutes, or until the souffléd meringue is browned and cooked to your liking. You can stick a paring knife between two of the mounds to take a look and see. (I found about 13 minutes was just right for me, but if you like meringue more cooked, lean toward 14 or even 15 minutes.) Remove from the oven, sprinkle with powdered sugar, and serve immediately. 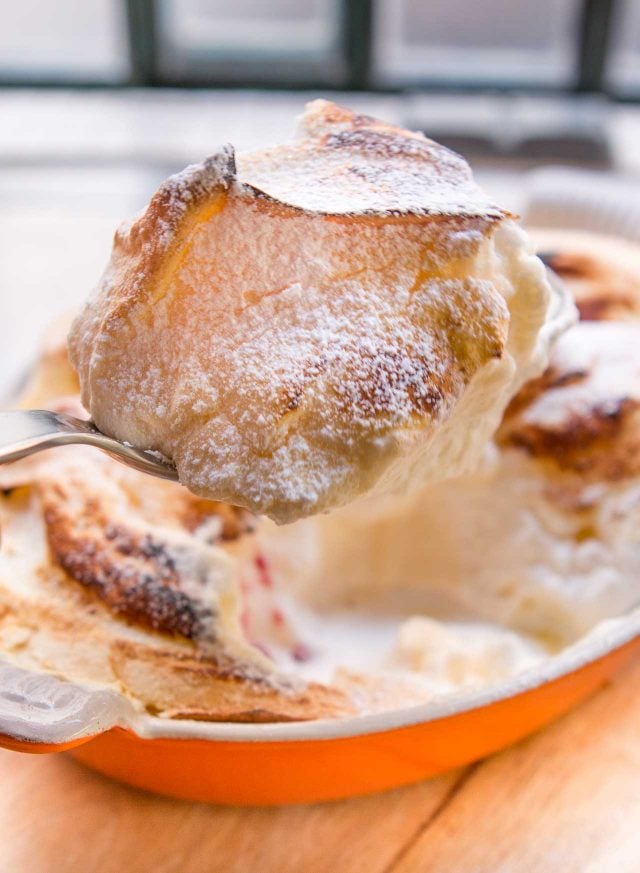 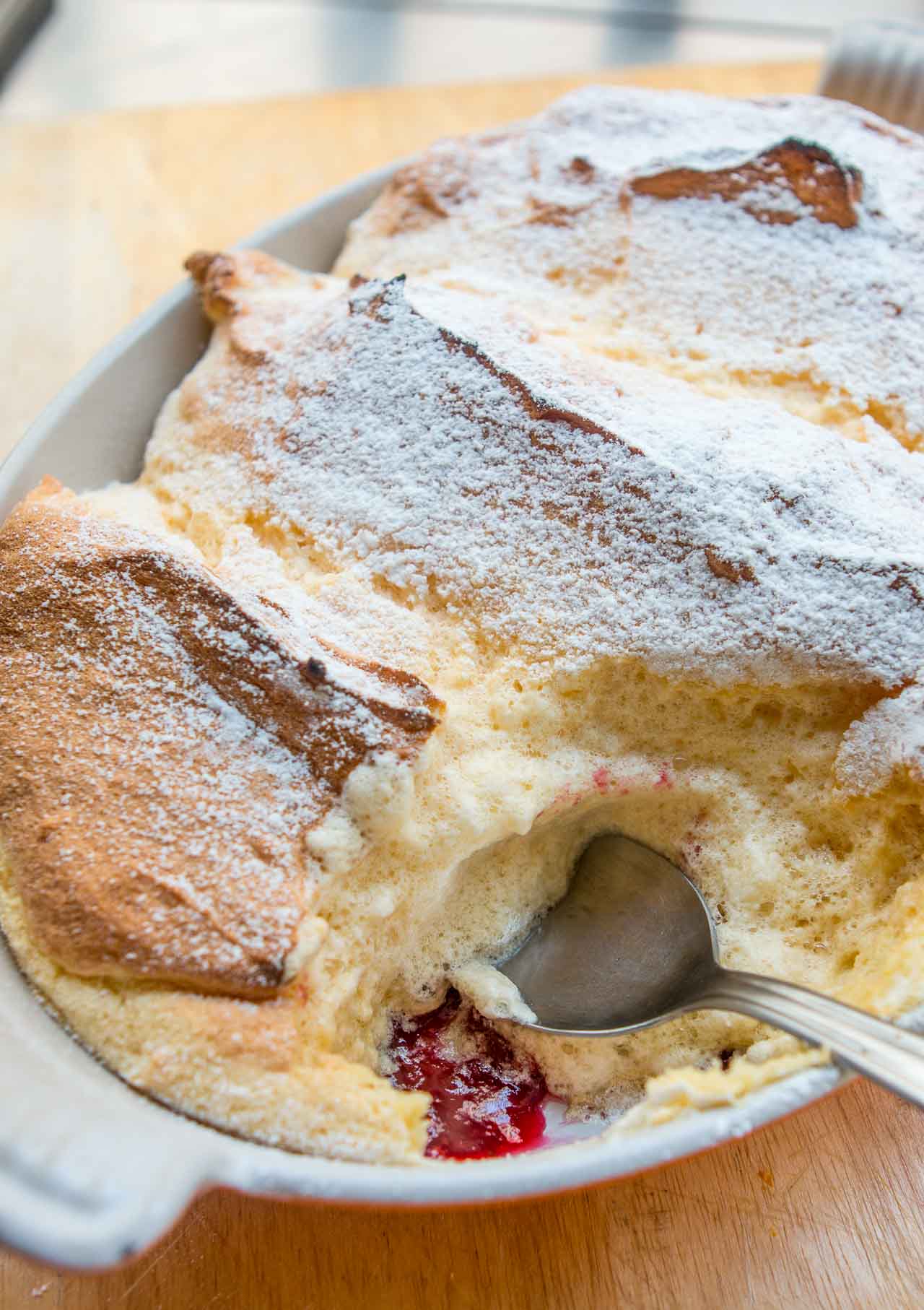