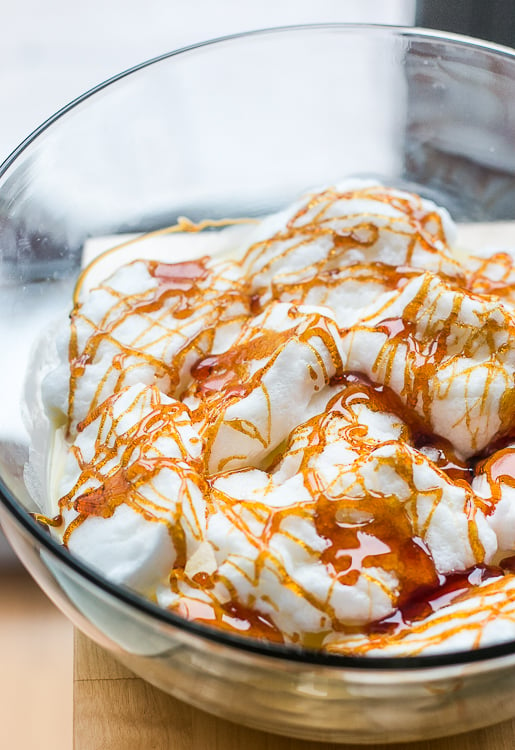 When asked about my “desert island” dessert, it takes me about a nanosecond to respond, and I invariably reply that it’d be Œufs à la neige, otherwise known as “Snow Eggs.” It’s one of those classic French desserts that, even though I’m not French, I have a deep fondness – and a sense of nostalgia – for. When I order it in restaurants I am usually disappointed. Often it’s made with pre-packaged crème anglaise (yes, that’s a thing, or powdered) and bottled caramel sauce, neither of which appeals to me.

I want the real thing: Homemade custard sauce, served ice-cold, topped with fluffy mounds of meringue, finished with spoonfuls of almost-burnt caramel, enough to give it a bit of an edge, but not enough to be actually burned. 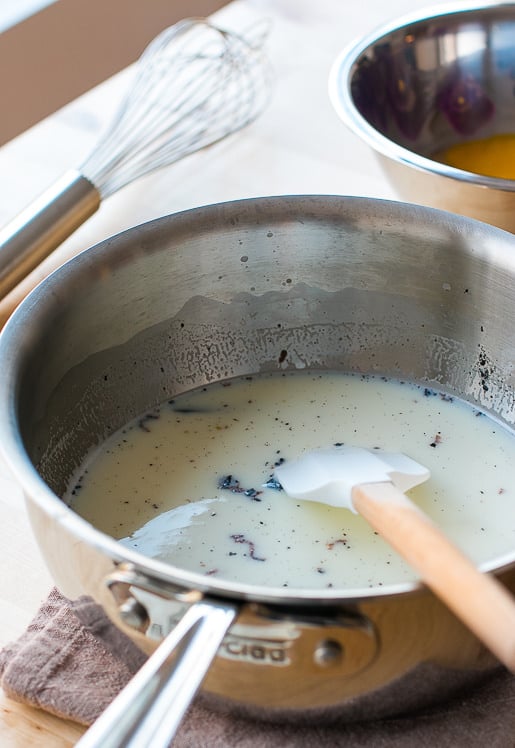 I don’t make Œufs à la neige nearly enough, which is probably a good idea since I tend to dip into the bowl of meringues, lopping off mouthfuls of meringue along with vanilla-scented custard sauce and a bit of caramel.

I was recently thumbing through French Roots by Jean-Pierre Moullé and Denise Lurton Moullé, who are French, but who’ve spent “thirty-something” years in the United States, according to the introduction to the book. Jean-Pierre was the chef downstairs at Chez Panisse and if you read My Paris Kitchen, he was the handsome Frenchman who wooed me with his French omelet-making techniques.

Their new book does, indeed, have a French omelet recipe in it, but there’s plenty more. Many of the recipes are French, with references to their native Bordeaux, with others inspired by the bounty of Northern California. I particularly enjoyed the chapter, Life in Berkeley in the Seventies, as well as France en Famille, about growing up in the French countryside. Both left a deep impression on them and guided their cooking.

There are also lovely pictures of their house in the country, their vibrant French garden, and the roaring fire in the kitchen where dinner is often prepared by Jean-Pierre from foods he hunted and forged in the surrounding woods and fields. Hmm..come to think of it, next time I see them, I’m handing them my adoption papers. 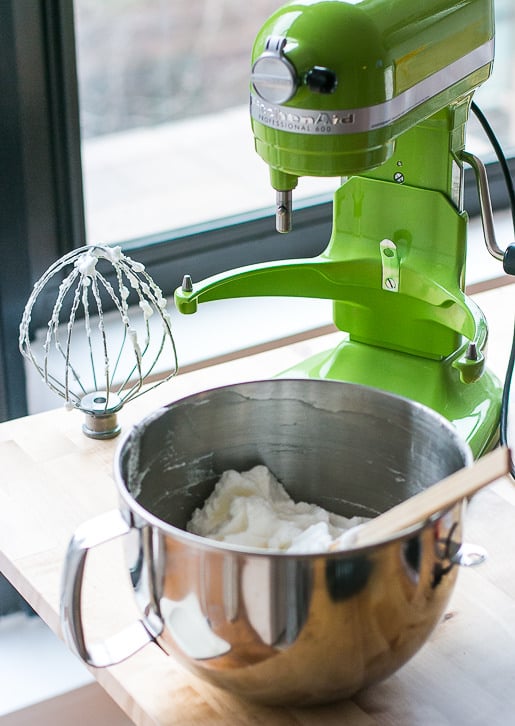 In addition to the recipes, Denise shares some of the quirks between their life in America, in contrast to their life in France. Such as when signing up for a family plan for mobile phone service for them and their children, they were in and out of the mobile phone store in the U.S. within minutes. In France, it was several days of gathering birth certificates, and reams of other paperwork, before they were allowed to open a family account.

She also shares a story about how enthusiastic Americans are about things, using superlatives like “Incredible!” or how much we just love something, which she says the French consider such excess vulgar. As she notes, high praise in France would be pas mal, or “not bad.” 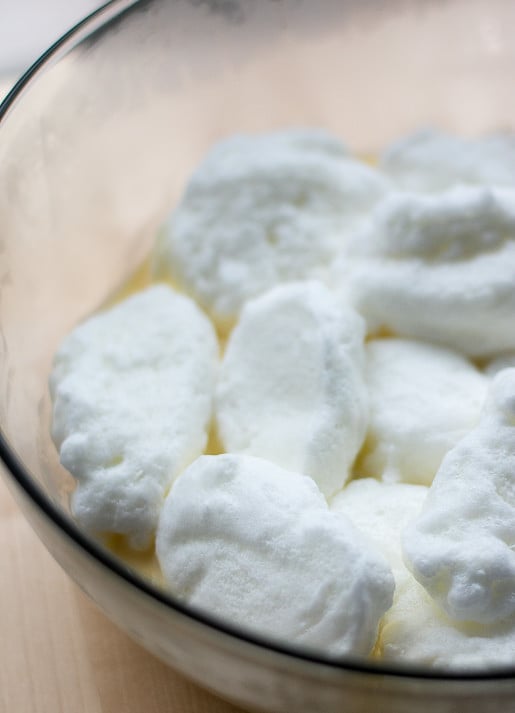 I guess I’m still très américain because I love œufs à la neige, and I can’t contain my enthusiasm for this dessert, which is a little on the sweet side. When I saw Denise putting the finishing touches on hers in French Roots, I got cracking and made a batch of crème anglaise, whipped up fluffy meringues in my mixer, and melted some sugar until it pooled into a bubbling-hot, amber caramel. 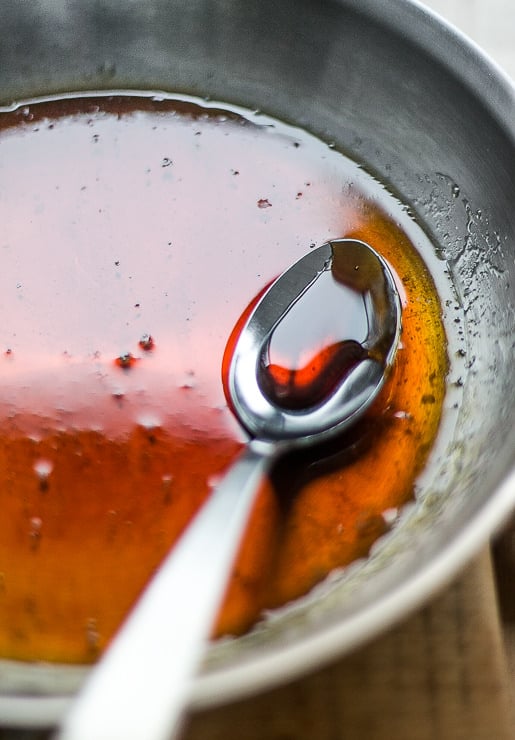 Another difference between the French and Americans that I’ve noticed is that people don’t get too worked up in France over a homemade dessert that looks — well, homemade. If they want perfection, they go to their local pâtisserie. People are always delighted to be presented with something that’s homemade, so don’t expect this to look like something from a chic pastry shop in Paris. It should look like something from your kitchen, wherever your roots are. 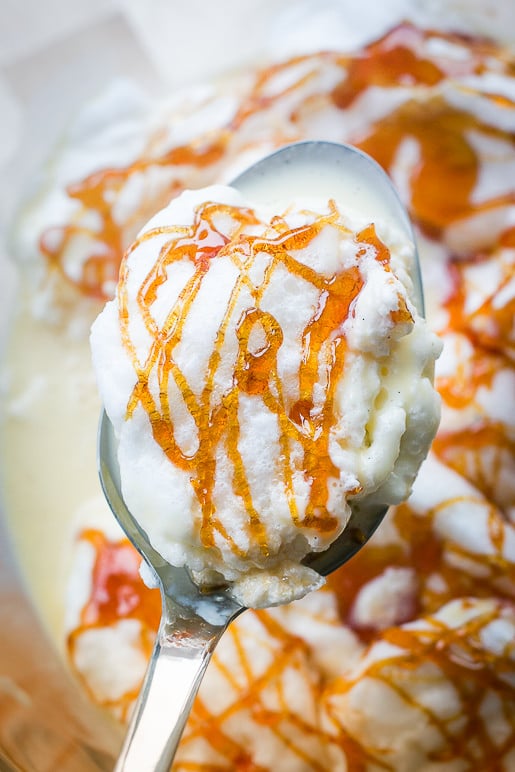 Inspired by French Roots: Two cooks, two countries & the beautiful food along the way by Jean-Pierre Moullé and Denise Lurton Moullé (of Two Bordelais) It’s common to poach the meringues in milk, then use the milk afterward as the base for the crème anglaise, which Denise does in the book. However I like the custard to be really, really cold when served, so I make the custard sauce well in advance (it can be made up to three days ahead and refrigerated), so it’s hyper well-chilled when it hits the bowls. I chill the individual serving bowls, too. If you want to poach the meringues in the milk, Denise offers instructions and proportions in the book. Although Americans are the ones prone to “going to the extreme,” I dialed down the egg yolks in Denise’s crème anglaise. She uses eight, I use six – so feel free to use either. You’ll notice I got a few larger blobs of caramel in mine because I was trying to drizzle the caramel while take pictures of it, which isn’t recommended (especially if you like to bake barefoot.) So be “present” when making and drizzling the caramel. But when eating the finished dessert, you can do so with abandon.
Crème anglaise
2 cups (500ml) whole milk 500ml
6 to 8 large egg yolks
1/2 cup (100g) sugar,
1/2 vanilla bean
Meringues
6 to 8 large egg whites, at room temperature
1/3 cup (65g) sugar
pinch of salt
Caramel
3/4 cup (150g) sugar
3 tablespoons water
1. To make the crème anglaise, combine the milk and sugar in a medium saucepan. Split the ½ vanilla bean lengthwise then scrape out the seeds and put them, and the pod, into the milk. In a separate bowl, whisk together the egg yolks. (Use six if you want a standard custard sauce, eight if you prefer it extra-rich.)
2. Make an ice bath by nesting a medium size metal bowl in a large bowl filled with ice and a little cold water. Set a mesh strainer over the top.
3. Heat the milk until steaming. Whisk some of the warmed milk mixture into the egg yolks, then scrape the warmed yolks back into the saucepan. Cook over medium-low heat, stirring constantly with a heatproof spatula, scraping the bottom, sides, and corners of the pan, until the custard is thick enough to coat the spatula. Don’t let the mixture boil.
4. Immediately strain the custard through the mesh strainer into the chilled bowl. Pluck out the vanilla pod, wipe off any bits of egg on it, and return it to the warm custard. Stir the crème anglaise to help cool it down. Once cool, refrigerate.
5. To make the meringues, line a baking sheet lined with a clean tea towel or paper towels. In a large, wide saucepan or casserole, fill it about halfway with water and heat it until it comes to a lively simmer.
6. In the bowl of a stand mixer fitted with the whisk attachment at medium speed, or by hand with a whisk, whip the egg whites with the salt until they are foamy. Increase the speed of the mixer (or your whipping, with the whisk) until the egg whites begin to start holding their shape. Whip in the 1/3 cup sugar, one tablespoon at a time, until the whites hold their shape when you lift the whip. Do not overwhip or the meringues will be dry.
7. Using two large soup spoons, scoop up a generous amount of the meringue onto one spoon – it should be heaped up so high that it threatens to fall off – then take the second spoon to scrape it off, dropping the oval of meringue into the simmering water. (You might be tempted to spend a few moments shaping the meringue into a nicer oval with the second spoon before scraping it off, but in the finished dessert, it won’t really matter much all that much. Remember, this is a home-style dessert.)
Don’t crowd too many into the pot; they should be allowed to float freely. Doing six at a time is usually a good number. Plan on getting sixteen meringues from the egg whites, total. But don’t worry if you don’t; two makes a good portion for some people, others want three.
8. Poach the meringues for 3 to 4 minutes, then flip each one with a slotted spoon, and poach for another 3 to 4 minutes. Remove the meringues with a slotted spoon and put them on the lined baking sheet. Poach the remaining meringues.
9. When all the meringues have been poached, pour the crème anglaise into a large, wide, chilled bowl. Nest the meringues close together on the top, floating them in the crème anglaise.
10. To make the caramel, heat the sugar and water in a skillet, swirling it as little as possible, if necessary, so it cooks evenly, until it turns a medium amber color. Turn off the heat and use a spoon to drizzle the caramel over the meringues.

Do-ahead notes: You can make the crème anglaise up to three days in advance and refrigerate it. The meringues can be made the same day of serving and refrigerated as well. The caramel is best made and drizzled at the last minute although can be done 1 to 4 hours ahead. The longer you let it sit on the dessert in the refrigerator, the more it will soften and become sticky. A few hours usually is fine, though. No part of this dessert can be frozen.