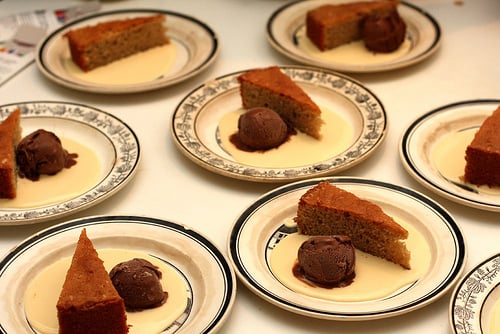 When I started working at Chez Panisse, there was something called crème anglaise on the menu…and my job was to make it. Of course, I had no idea what crème anglaise was – other than something with a funny name that I got in trouble for pronouncing wrong on several occasions. But I pretended I knew what it was when everyone was talking about making it to go with the desserts. And luckily for my career, after a few years, I probably made at least one batch everyday for the next thirteen years, and stirring up a batch of crème anglaise became second nature to me. 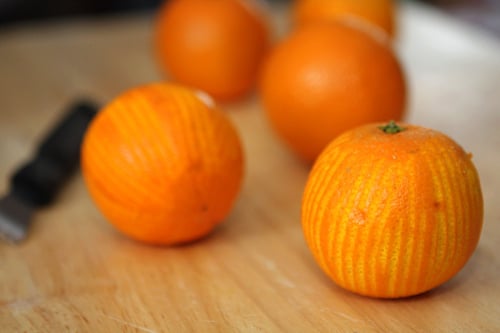 Also when I started at the restaurant, I was told I needed four things: A chef’s knife, a paring knife, a bread knife, and a zester. So I bought a slightly fancy German one with five wide holes, whose sharpness was a revelation and it took wide strips of zest off a lemon or an orange in one easy motion This was before the advent of rasp-style zesters, which I usually reach for, but when I moved to France, I brought along my trusty zester which I’ve kept close by since 1983, and it’s still as sharp and as easy to use as the day I bought it. 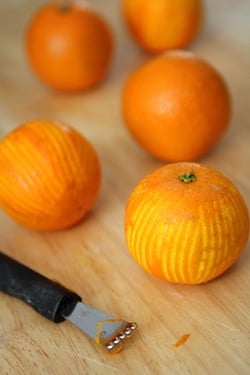 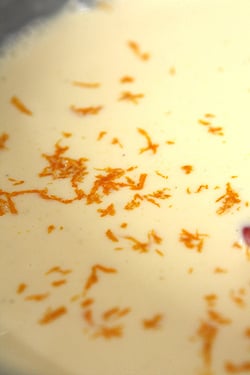 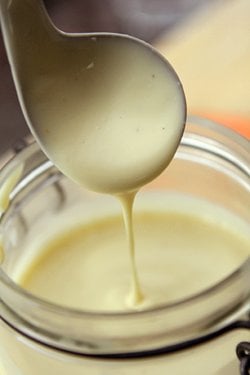 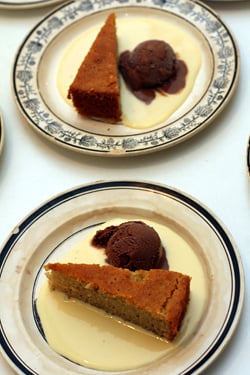 I’ve learned over the years that the best way to keep your knives and kitchen tools sharp and in good working order is not to let others use them. And I’ve also learned the best way to get the most of the fragrant citrus oils out of citrus fruits is to zest directly into the mixture that you’re steeping. Otherwise, the fragrant oils end up on the countertop or cutting board, and I don’t know about you, but I’d rather have them in my custard sauce than have to lick them off the cutting board.

(Which is also why I rarely call for chopped zest in specific quantities, like 1 tablespoon or something, and just call for the zest of a number of fruits. Since citrus can vary in strength, it’s just better to take an educated guess. And when in doubt, err on the side of using more.) 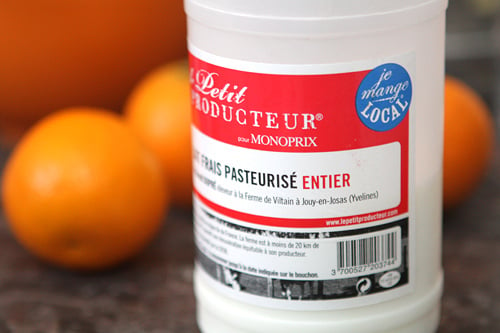 There’s a growing – and welcome – consciousness about things that are local here in Paris. And while folks might argue that much of the area in the Île-de-France is set aside for industrial agriculture, after living in the United States – and because of my American optimism – I’ve seen what can happen if people start demanding things from, and supporting, local farms and producers. So while I’m slightly skeptical of large-scale supermarkets touting “petit producteurs” (like ‘Milk from Here’), these things usually begin as something seen as ‘trendy’, then become the norm. So I’m buying it.

A while back I was engaged in a debate with Michael Ruhlman about whether crème anglaise has cream in it or not. To bolster his argument, he cited a few contemporary recipes (including his) that have cream in them. Food does change over time, but I’ve never met anyone (except for Michael, who likes rich foods, and we actually had that argument on a beach in Mexico) that felt that crème anglaise wasn’t rich enough made with just milk. And that wasn’t the margaritas talking. 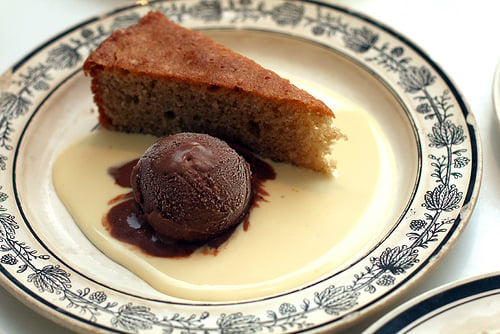 Crème anglaise isn’t meant to be “impossibly” thick or too sweet; it’s meant to be an accompaniment, to balance flavors of cakes and other desserts, or act as a liaison, for desserts like the buckwheat cake and chocolate ice cream I made for someone’s birthday this weekend. That said, crème anglaise is quite good poured alongside a frosty fruit sorbet, when a bit of richness and contrast is desired, or even with a bowl of strawberries. Whatever you do, do not substitute low fat or nonfat milk, as you won’t be happy with the results. And I know that Michael wouldn’t be happy if you did that either.

This pouring sauce goes well with a variety of desserts, from a bowl of fresh berries to pooling under a wedge of cake. You can leave out the orange and swap out a vanilla bean and a touch of extract when it’s finished. And there’s a slightly zippy variation with Sichuan pepper at the end. Crème anglaise should be served icy-cold, so make it well in advance, and give it time to chill. If you wish to serve it in a pitcher or bowl, chill the vessel first as well.
Servings 2 (500ml)