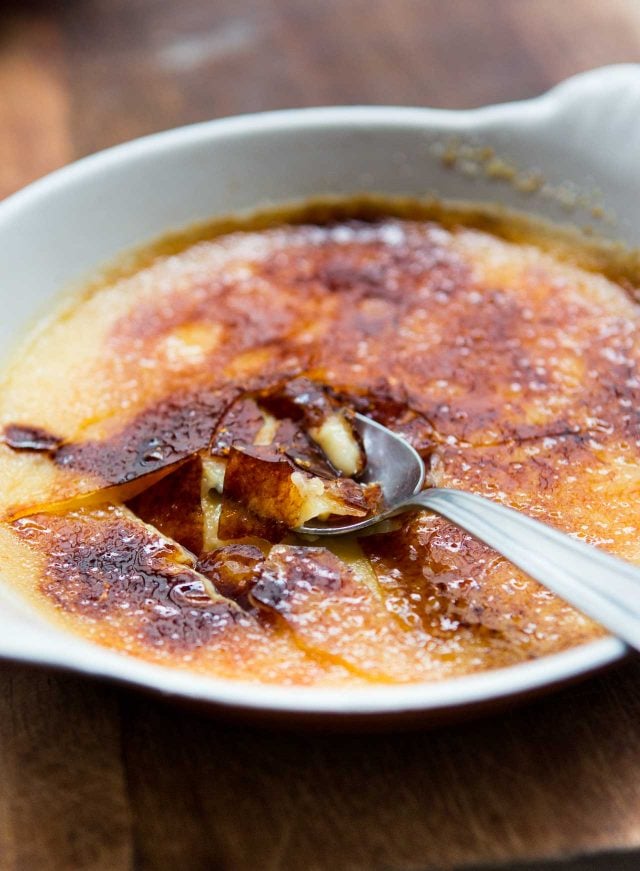 When it was on the cusp of popularity in the U.S., I sort of introduced crème brûlée to a restaurant where I was working at the time, and, predictably, they took off. So much so, that most of my nights were spent torching crème brûlée as fast as I could. Finally, I put an end to that (popularity is overrated), and that was that. 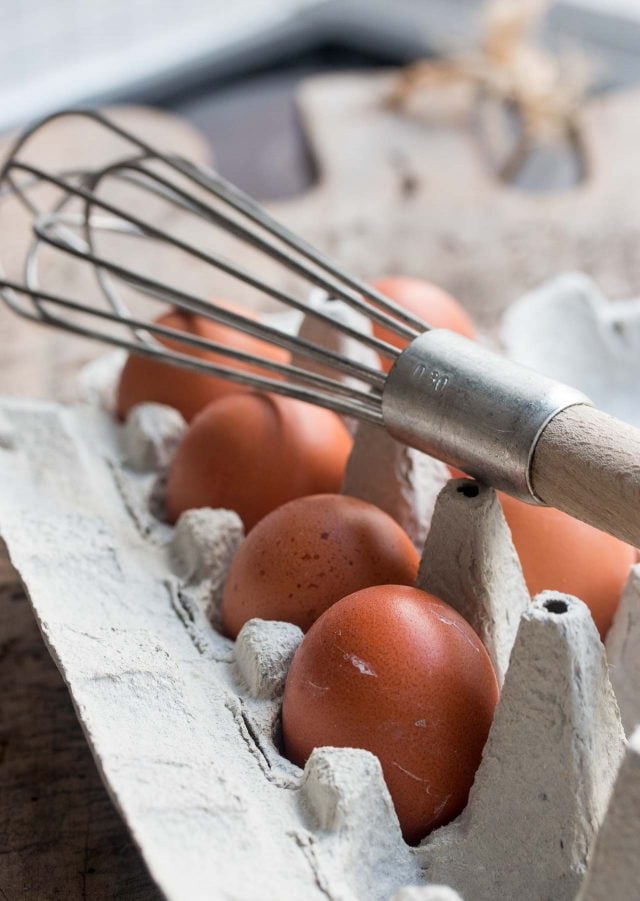 There was also a chef in the kitchen who was irked every time I started up the torch to caramelize the custards, saying “That’s not cooking.” I’m not sure how putting fire to the top of something to cook it was different from putting a fire under something, such as a skillet or saucepan on a stovetop, but since I was known for getting into trouble for talking back to people, I didn’t say anything. 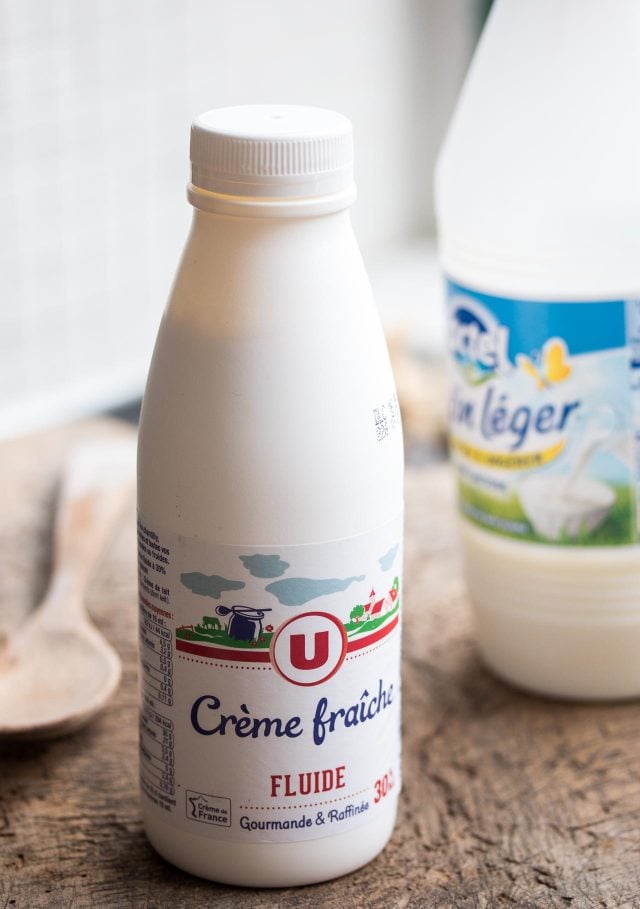 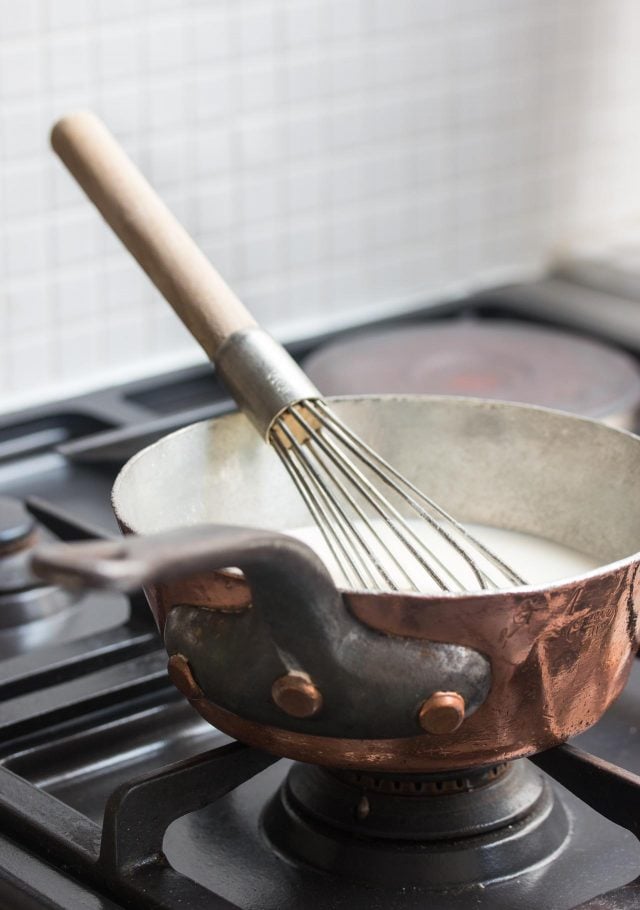 Years later, I moved to France and started eating crème brûlée again because, frankly, it’s hard to avoid. There are good versions, but I still haven’t found one that tastes as good as when you make them at home. Plus I get to use my individual vintage Le Creuset gratin dishes when I do, too. 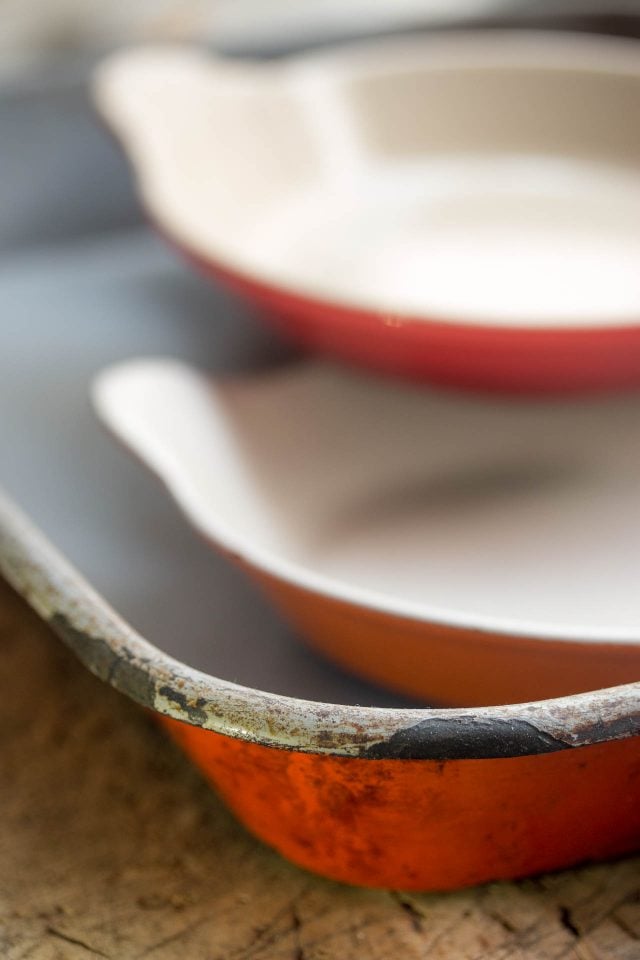 In My Paris Kitchen, I wrote about part of my journey back to this dessert was because the French bake crème brûlée in shallow baking dishes, so the ratio of caramel to custard is a little different than the deeper ramekins often used in the States, which made me love them (again) even more. 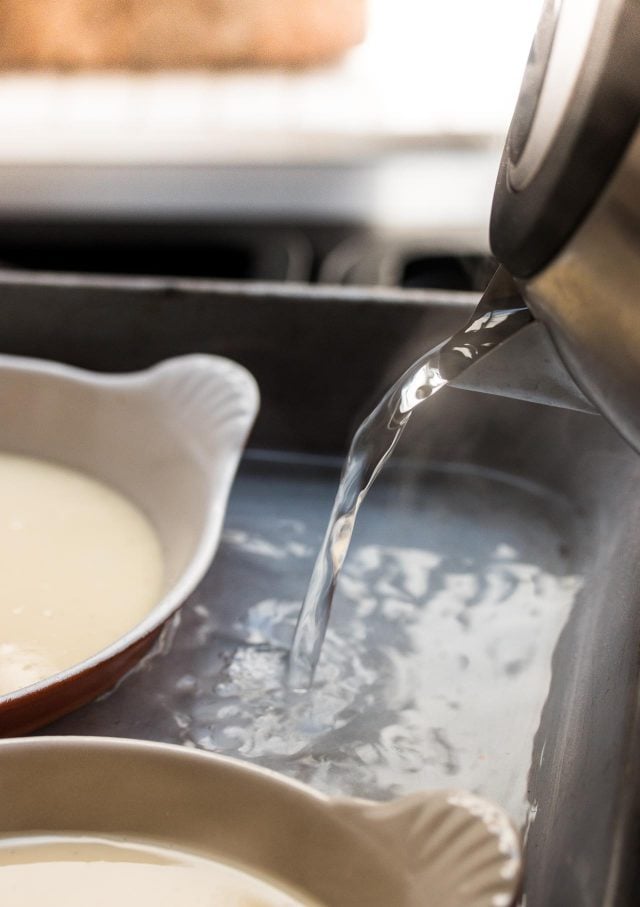 A torch is a great thing to have in your kitchen and I got mine (below) at my local hardware store. But my new favorite kitchen appurtenance is my electric hot water kettle. I had to stop drinking coffee for a while and since tea doesn’t do it for me in the morning, I was drinking a toasted grain beverage, which has the same roasted flavor as coffee, so I didn’t feel like I was missing much. (I drink coffee for the taste, not the caffeine.) Yes, it’s not the same thing, but it was odd how people made me feel like I was committing some grave act against humanity by giving up coffee. Almost the same blowback as quitting crème brûlée. 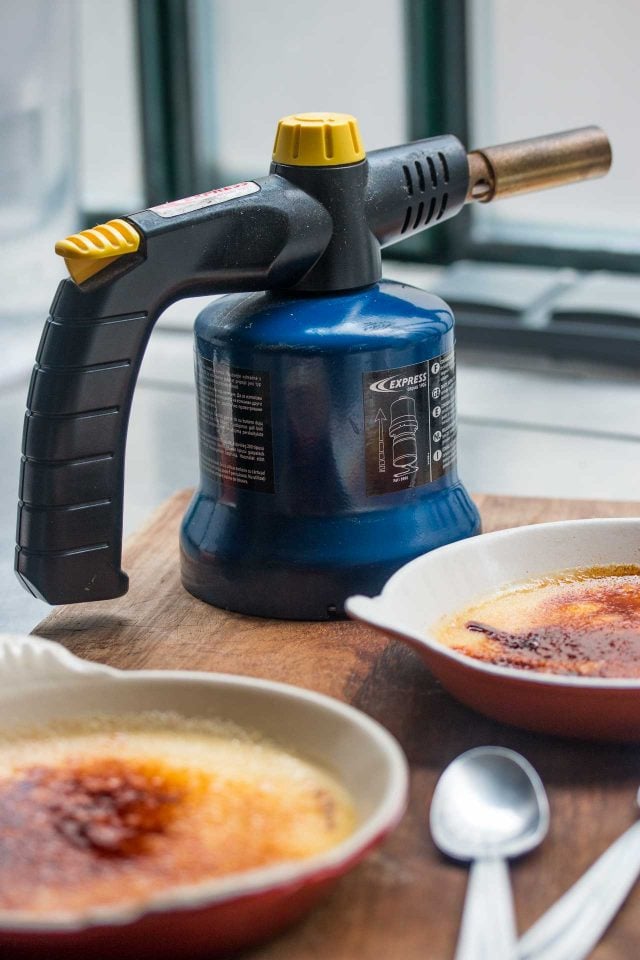 So now I’m drinking coffee, and eating crème brûlée again. Another exciting thing happened was getting a copy of In the French Kitchen with Kids by Mardi Michels. I saw a preview of the book a few months prior and I loved how she made French cooking accessible to everyone, including the little ones. French cooking isn’t hard. True, some of it involves fancy techniques, but most French home cooking is very simple. 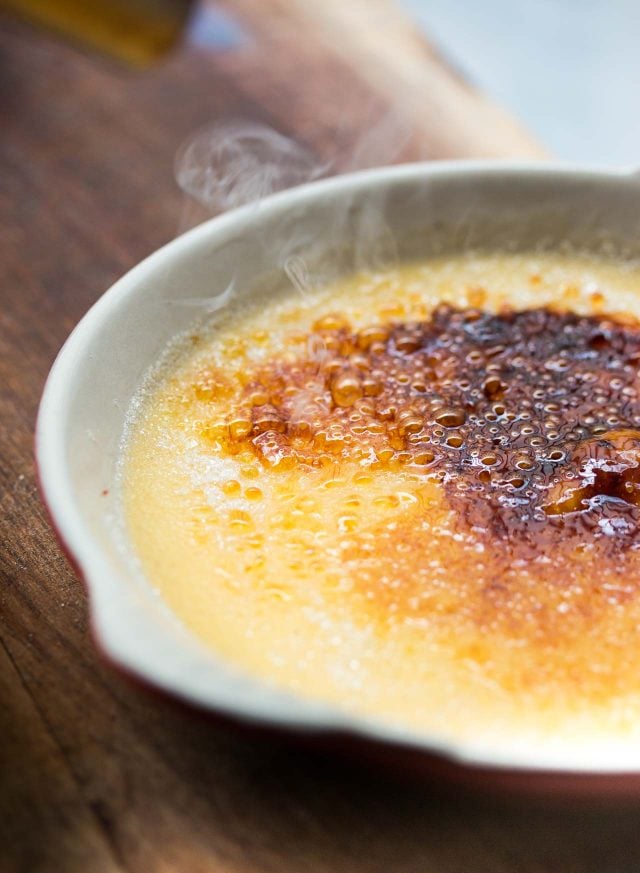 Crème brûlée is nothing more than making a custard, baking it, then caramelizing the top, which is the only tricky part. And the part where mom and/or dad will want to step in and take over. But considering how much power I wielded with my blowtorch in a restaurant kitchen, scaring the line cooks from swiping cookies from the pastry department, I would imagine it might have the same effect on keeping the brood in line, fyi. 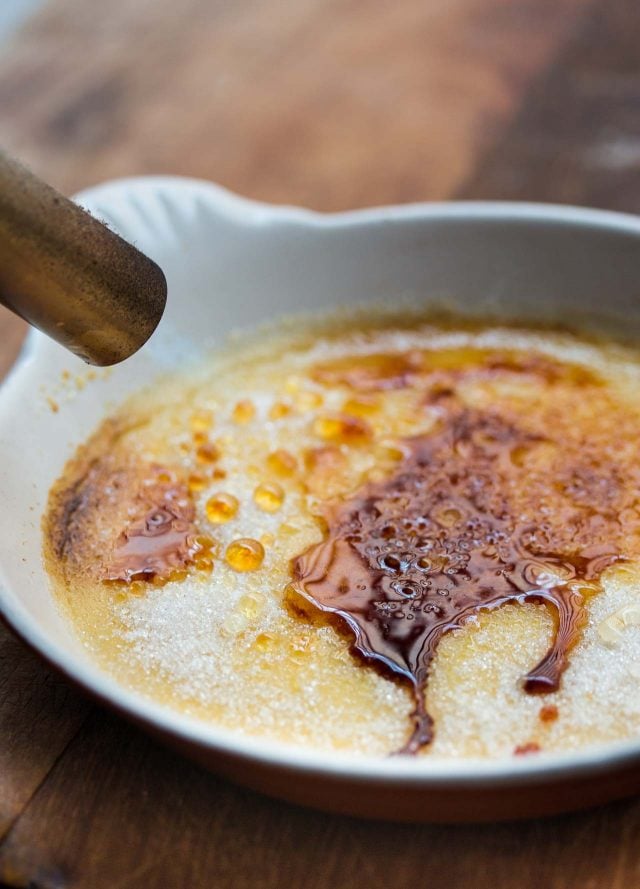 I’ve not used a broiler to caramelize custards but Mardi says you can do it, but to watch out, as the caramel can burn quickly. So keep an eye on them. If you’ve overdo it when caramelizing the top (which I’ve done once or twice), let it harden, pry it off, sprinkle the custard again with granulated sugar, and caramelize it again. 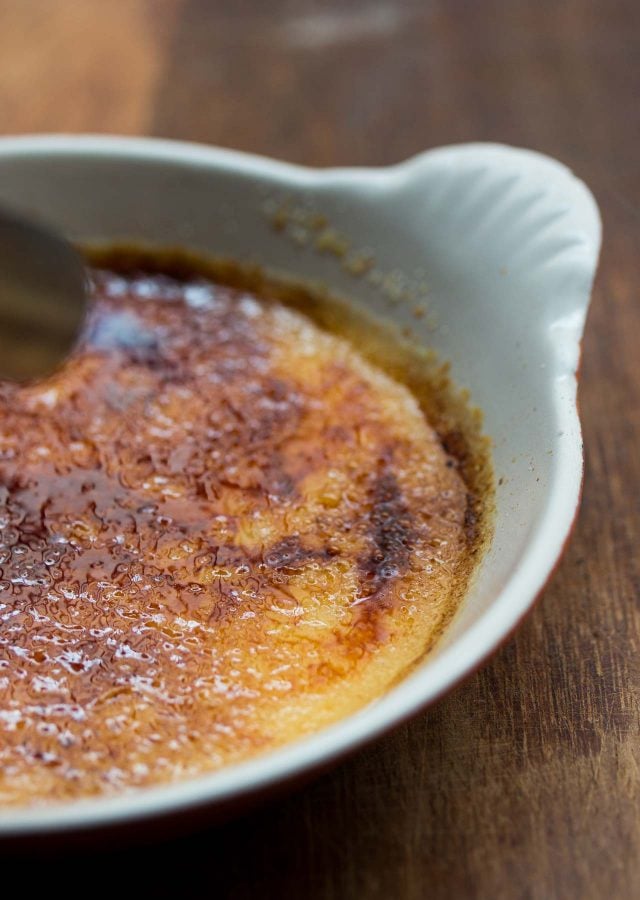 Adapted from In the French Kitchen with Kids by Mardi Michels I tinkered with the original proportions (and baking times) in the recipe, upping the amount of custard. Shallow molds can vary, but the amount given here fit in the bowls of my small gratin dishes, and the standard (4 ounce/125ml) ramekins, which I tested as well. Similar-sized custard cups would work too. Baking times in custards can vary. These don't get covered with foil while baking, so it's easy to check them while baking and you can take them out just when they're ready. I used very hot water from my electric teakettle so yours may take more time than mine.
Servings 4 servings

Serving: Serve the custards shortly after caramelizing the tops. You can refrigerate them once they are caramelized, but they lose some crispness and I think if you're going to eat creme brulee, you should do it when it's at its finest. Note: As mentioned, some people broil the sugar-topped custards under the broiler to caramelize the sugar. If you try that, take care as they can burn quickly. You can also make a regular caramel in a skillet and pour the warm caramel over the custards, and let it harden. For these custards, I'd use about 1/3 - 1/2 cup (70g to 100g) of sugar for the caramel. 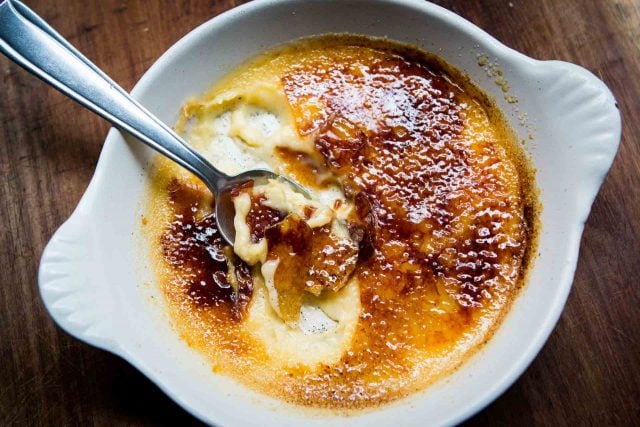 How to Make the Perfect Caramel