Once again, I found myself with an overload of fruit. Sure, I like pears and apples, which show up at the market on the cusp of autumn. But I want summer to last as long as possible. So when I see good nectarines, peaches, and plums lingering at the market, I pack my market basket to the brim, carefully making sure the delicate fruits aren’t going to get bumped and bruised, and lug my beautiful bounty home. 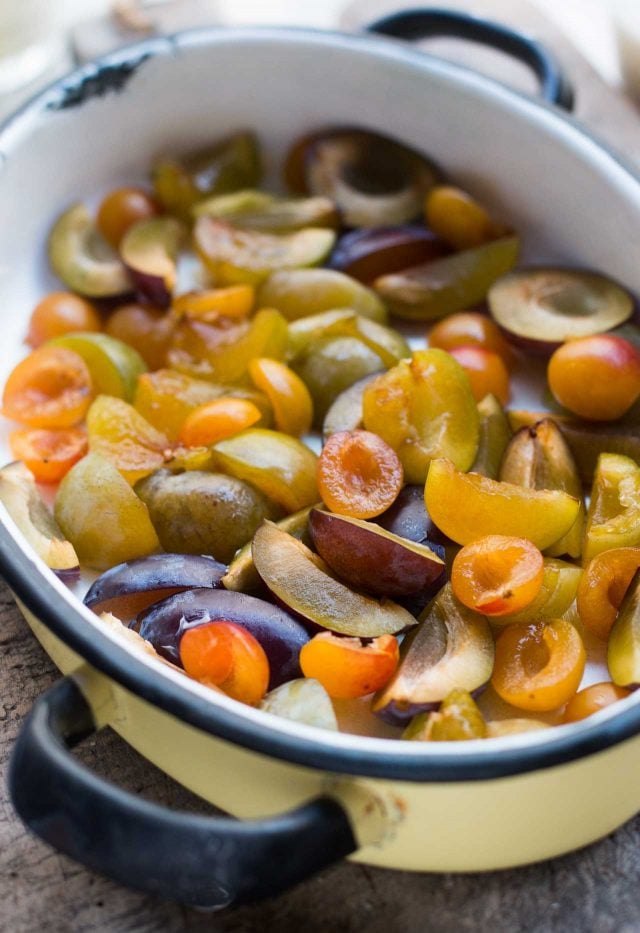 Plums are right up there with my favorite fruits of all. French plums fall on the sweet side, like tiny, golden mirabelles and Reine Claudes, each bite filling my mouth with a sticky plum nectar, making me reach for another before I’ve even finished up the one I’m still working on.

I don’t often bake with these plums, which are perfect for snacking, preferring sharper tasting purple plums for tarts and crisps. I like the contrast of tangy and sweet when purple plums are baked, but I was inspired to go resolutely French with these plums and made a flaugnarde. A dessert with roots in Périgord, and a cousin to clafoutis, one often associates flaugnardes with pears (or at least I do), but found a recipe for one with prunes and raisins in The French Menu Cookbook by Richard Olney. 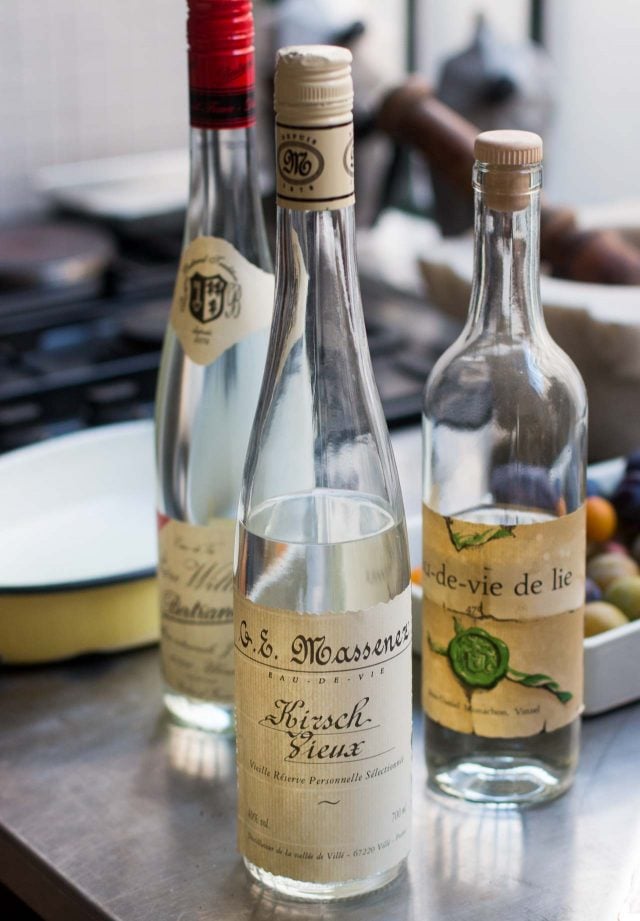 For those of you who don’t know who Richard Olney was, he was an American who spent most of his life in France, tasting wine, and became a widely recognized expert in France (and elsewhere) on French wines. He was also a gifted cook, but he was an especially gifted writer. He wrote several cookbooks on his own and penned Lulu’s Provençal Table with Lulu Peyraud. He was the inspiration for the cooking at Chez Panisse, and the restaurant’s philosophy was guided by his book, Simple French Food, which I was told I should brush up on before my interview to work there. To be honest, I didn’t know who he was and fudged my way through the interview. (Yet somehow managed to get the job.) But I’ve made up for lost time and have become a devotee.

A recent portrait of him, as well as some of his American compatriots, are part of The Gourmands’ Way: Six Americans in Paris and the Birth of a New Gastronomy, along with M.F.K. Fisher, Alexis Lichine, A. J. Liebling, Julia Child, and Alice B. Toklas, other Americans who lived in France and had a notable effect on the presence of French cuisine outside of the country. 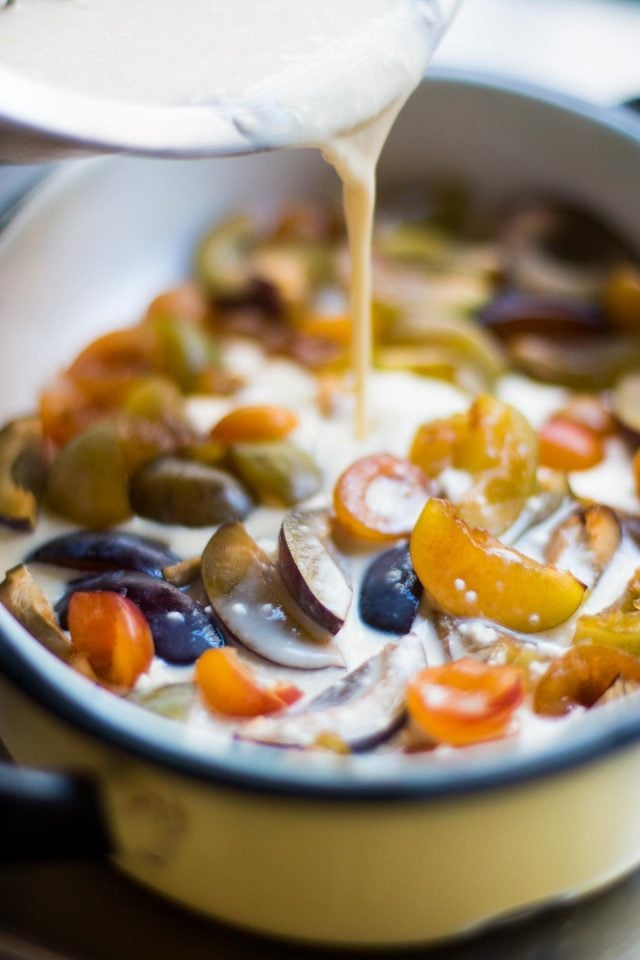 This revealing book is based on letters and historical documents, researched by Justin Spring. I met Justin when he was in the early stages of writing the book and had come to France to feel out the topic, and the characters. When the book was almost done, he told me that I’d find a number of things in it eyebrow-raising, which were true. There had been notable errors and flaws with Fisher’s The Cooking of Provincial France for the Time-Life Foods of the World, including making the statement that “French cooking means an elaborate and expensive way of complicating or at least masking food with sauces.” Many of the things written about in the book were extensively footnoted in the French edition, for accuracy.

Julia Child and Richard Olney had a not-necessarily smooth rivalry. She bickered with her friend and co-author, Simone Beck, who was also a good friend of Olney, who both had issues with her “Americanization” of French cooking. And Alice B. Toklas lived in near-poverty after her partner Gertrude Stein passed away, surrounded by paintings by Matisse and Picasso in her apartment, which became the property of Stein’s brother, who was less-than-gracious (and generous) to the widowed Toklas. 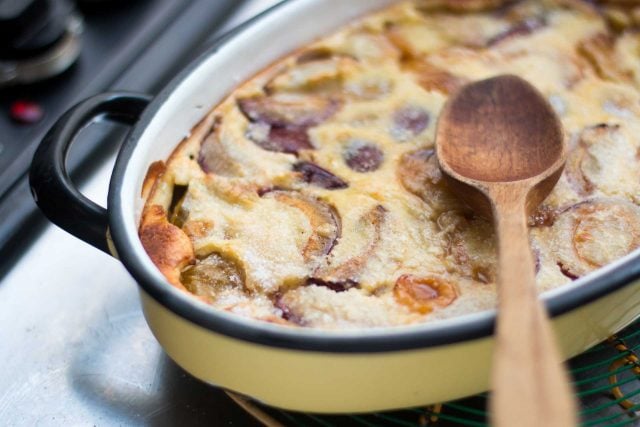 The Gourmands’ Way is recommended reading if you want to learn a more about these six icons who influenced generations of cooks in America, and elsewhere, including me.

Because of Justin’s book, I’ve been re-reading Olney’s The French Menu Cookbook. It’s hard to describe what an eloquent food writer he was, probably the best of our generation. (He passed away in 1999.) His writing wasn’t overwrought and you felt like he was talked to you in every recipe, from simple to complicated, with guided assurance and precision. He encouraged cooks to use their senses, teaching you something about French cooking with a remarkable economy of words.

He was also sharp and méprisant (scornful), which often came through in his recipes. One for Roast Guinea Fowl begins with a discussion on how to prepare the bird, “All roasting birds, if they haven’t already been mangled by the butcher…” Which could be translated as – Your butcher may not know what she or he is doing, with a sly allusion that he knew more than they did. 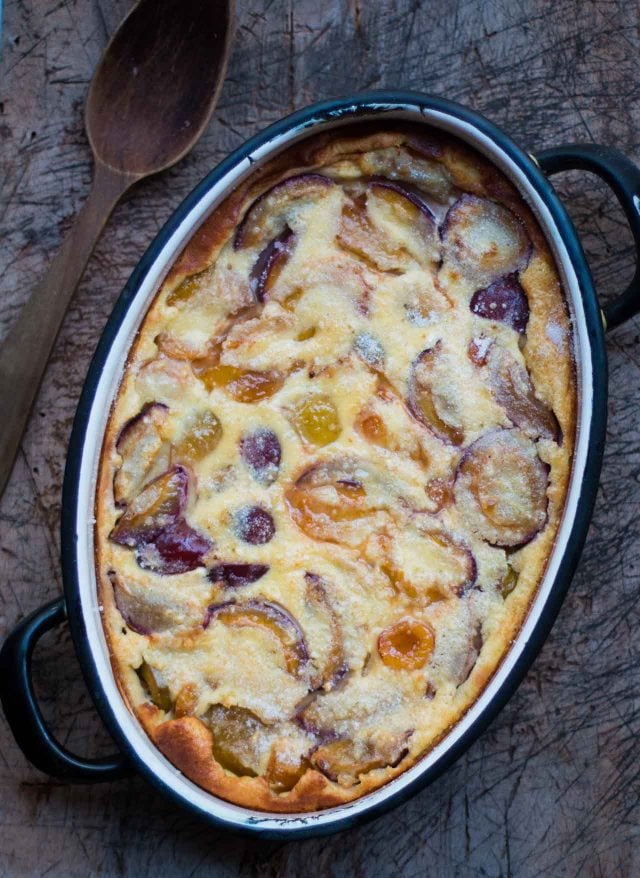 His headnote before the flaugnarde cautioned cooks, and dinner hosts, that “Those accustomed to leavened pastries may, at first contact, find the custardy texture and the somewhat leathery skin bizarre. It’s simple honesty rarely fails to seduce.”

There’s a whole lot going on in those two sentences, which seem to contradict each other, but explains the appealing honesty of this traditional French dessert whose texture is different for a cake or torte, which was Olney’s gift. It was the perfect way to showcase my plums, without being fussy – I prepared this in less than 15 minutes (so much for French cuisine being “elaborate and expensive”), and we had a warm dessert by the time we finished with dinner.

Adapted from The French Menu Cookbook by Richard Olney If you want to leave the kirsch out, I've offered a few substitutions. If you want to make it without the alcohol, add a dash of pure almond extract along with the vanilla extract. For those on gluten-free diets, although I haven't tried it, it's likely one of the gluten-free flour mixes would work well for this. This is usually made with whole milk but I like the touch of richness that heavy cream provides, which also makes the texture a little silkier. But you can use 1 cup (250ml) of whole milk in the place of the 3/4 cup milk and 1/4 cup of heavy cream. Feel free swap out other fruits or berries for the plums, such as blackberries, raspberries, cherries, apricots, nectarines, or a mix of fruit and berries. I'd avoid using anything too juicy, like peaches. Pears are classic, and in his book, Richard Olney uses prunes (which he says, with classic Olney panache, should be "of the year's production, if possible") and raisins soaked in Cognac.
12 ounces (350g) plums, pitted and thickly sliced
3 large egg, at room temperature
1/2 cup (70g) all-purpose flour
1/4 cup (50g) sugar, plus 1 teaspoon for sprinkling over the finished dessert
1/4 cup (60ml) heavy cream
pinch of salt
3/4 cup (180ml) whole milk. (or 1 cup/250ml whole milk)
1 1/2 tablespoons kirsch, or another eau-de-vie, Cognac, brandy, or dark rum
1/2 teaspoon vanilla extract
1. Preheat the oven to 400ºF (200ºC). Generously butter a 6 to 8 cup (1,75l) baking or gratin dish, or a large pie plate. (I like to use one that's narrower, but deeper.) Strew the plums over the bottom of the baking vessel.
2. In a medium bowl, whisk together the eggs, flour, 1/4 cup sugar, heavy cream, salt, and about a third of the milk, until there are no lumps in the mixture. Whisk in the rest of the milk, the kirsch, and vanilla extract.
3. Pour the custard over the plums in the baking dish. Bake on the middle rack of the oven until the custard is just barely set in the center, about 20 minutes.
4. Remove from the oven and set on a cooling rack. Wait a minute, then sprinkle 1 teaspoon of sugar over the top.

Serving: The flaugnarde is best served warm or at room temperature, the day it's made. It can be served cold, although Olney says it's "less good." 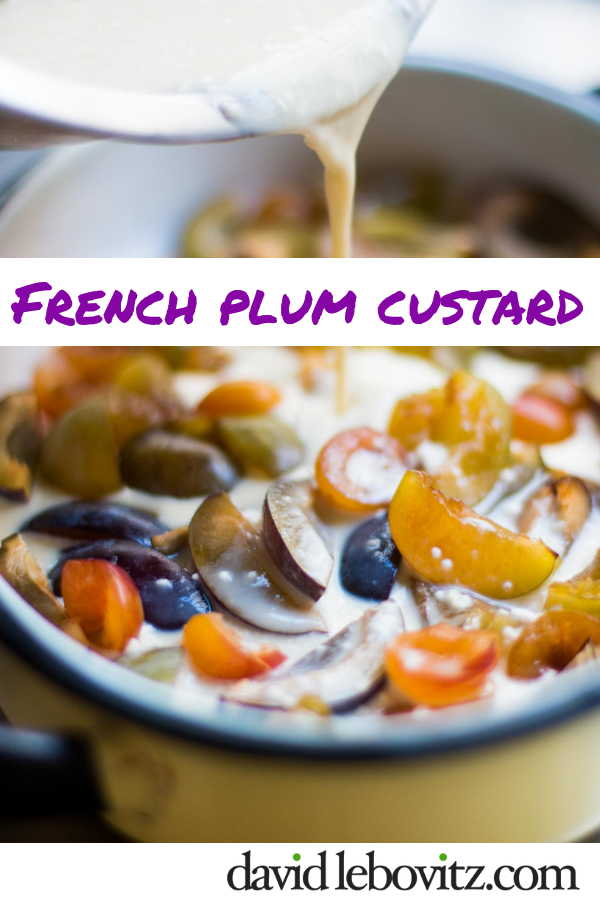