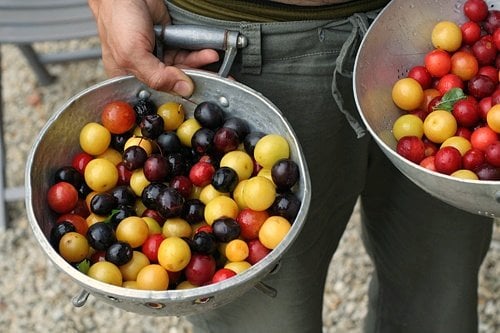 There is a French term, un glaneur, which describes a person who who glanes. If you don’t have any idea what that means, you’re not alone. I had to look it up in my French dictionary and there it was, just above the word glander, which they translated as, “to fart around.”

There’s a heckuva lot of French verbs out there, and I’ve been trying to learn them as fast as my little brain can absorb them, but that was a new one on me. Would one say, “Je vous glande”, or “I fart around you?” I hope not. (At least not around me.) 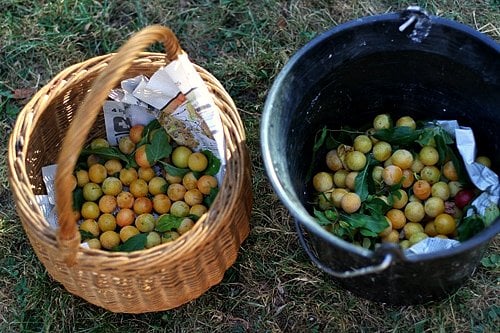 A glaneur (or glaneuse), is someone who picks or forages for fruits and vegetables. And in fact, there was a well-known film called Les glaneurs et la glaneuse about French people who hunt for food.

When we were recently driving around the Seine-et-Marne, a bucolic region just an hour or so outside of Paris, where we were spending the waning days of summer, we rang the bell of a friend of ours, who unfortunately wasn’t in. Yet being the eagle-eyed forager that I am, I fortunately noticed a whole bank of trees across the street, each heavy with branches bearing a multicolored line-up of itty-bitty wild plums that were ripe ‘n ready.

So I stopped glanding around, and decided to start picking.

As I’ve learned living in France, there are plenty of rules, but the rules apply to everyone else—not you. And when I asked Romain if it was okay that we were taking fruit off of someone’s tree, he said; “Nous sommes glaneurs. We have le droit”, the right. 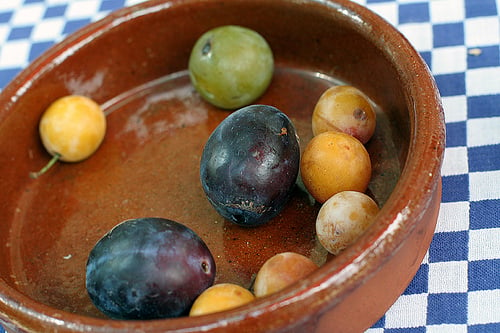 And that was enough for me. (If busted, I could claim ignorance, which wouldn’t be the first time; the other night I talked myself out of a ticket for biking the wrong way down a one-way street, which required four heavily-armed policemen to interrogate me at length about.) We hopped up on the roof of the Citroën to gather what we could, with the pleasant smell of the odiferous fermenting plums that had already fallen on the ground and begun their descent into decomposition, perfuming the background. We plucked as many plums off the trees as we could manage, and fled back home. 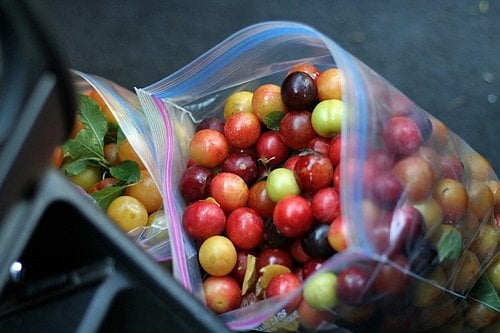 After a slightly-sleepless night for me, the next day we were excitedly back with our bags and buckets. And this time with a ladder. In less than an hour, we’d gathered three gallon-sized bags of wild plums, many already juicing away in theirs sacks and buckets. I couldn’t wait to get home to put them to use.

Since they were so small, I quickly abandoned the knife I was using , in favor of my fingers. After a few hours of pitting, as more colorful juices flew, the more clothes I ended up shucking. And after cooking them up, I ended up with around 5 quarts (liters) of the most beautiful plum puree imaginable.

(Note: It’s fine to pit plums in the altogether, but I don’t recommended boiling anything that’s hot, sticky, that has a tendency to splatter, and requires frequent stirring, in the same state of undress.) 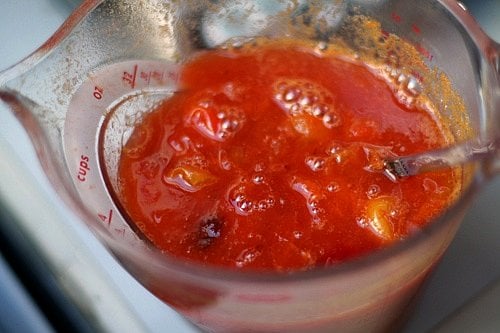 Enfin, I ended up with twelve jars of the most delicious wild plum jam imaginable. I brought a jar to my friend Jacques, who sells olives at my local market, who’s always telling me that we Americans make everything too sweet.

He pulled out his horn pocket knife, dug in and took a bite, and thought it rather acidic. But since I like my jam extra-tangy, I offered to take the precious jar back home. He wisely refused, and I think tomorrow morning, he’ll be eating his words. 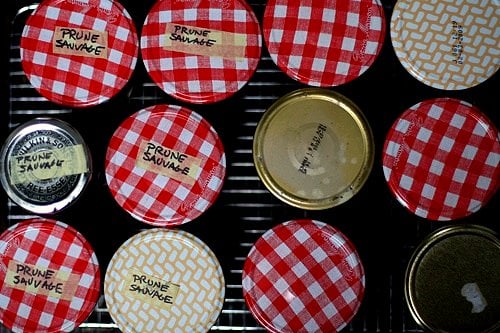 As you can see, the plums came in all sorts of wacky colors, and I sorted out what I thought was a reasonable amount of the brilliant yellow ones to make a bit of sorbet, and ended up with two tubs of the stuff. I don’t think anyone will mind having it around for a while. 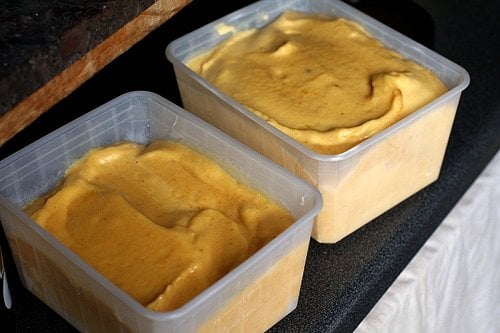 Which means I need to make some Vanilla Ice Cream to serve along with it. (Wouldn’t that be great if there was somewhere to forage for free, wild vanilla beans?)

I’d hoped to get back out before all the plums were gone, but now that it’s September, and it’s the end of les vacances, I’m going to have to be content to parsimoniously parson out my wild plum jam over the next twelve months. 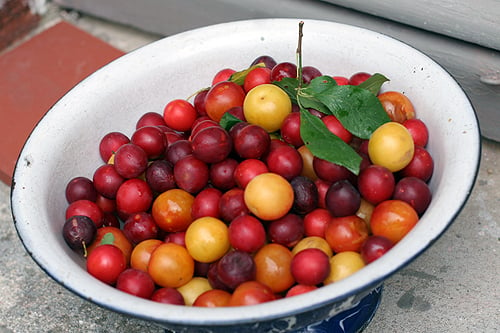 But when next summer rolls around, if you happen to be driving around the countryside outside of Paris and see les glaneurs swiping a few plums off a tree, don’t blow the whistle on me, or je vous glande.

(For the Wild Plum Jam, I used the same proportions that I used in my Apricot Jam Recipe. The plum sorbet recipe is from The Perfect Scoop, measuring by weight.)