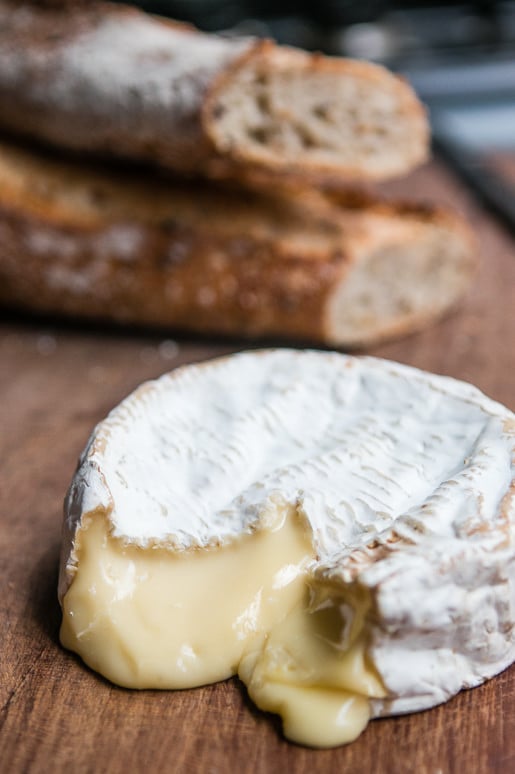 Althought it’s hard to blame it, my camera ate all of my Camembert de Normandie (pictures), which I discovered when I went to download them. I was miffed (to say the least…), but in the end, decided that it was tough to blame my mischievous machine because I understand how hard it is to be around a perfectly ripe Camembert de Normandie and not want to wolf the whole thing down. As they would say in Paris when presented with an irresistible cheese — C’est un catastrophe, a demi-joke referring to the devastating effect it has on la ligne. (One’s figure.)

Like the genie in the bottle, once you let a soon-to-be goopy camembert out of its container, no matter how firm you think it’s gonna remain, there’s no turning back once it starts doing what comes naturally. And if you are able to resist eating the whole runny thing in one go, in France, you can get a little plastic box to store your camembert in, with little hinged plastic “walls” to keep your camembert from running. (Even though plastic isn’t the best thing to store your cheeses in; most fromageries wrap cheeses in waxed paper sheets.) I don’t buy a lot of Camembert de Normandie because it’s hard to stop eating it. But for the sake of you all, I went and bought another one, just because I like living dangerously. And what’s another catastrophe between friends? 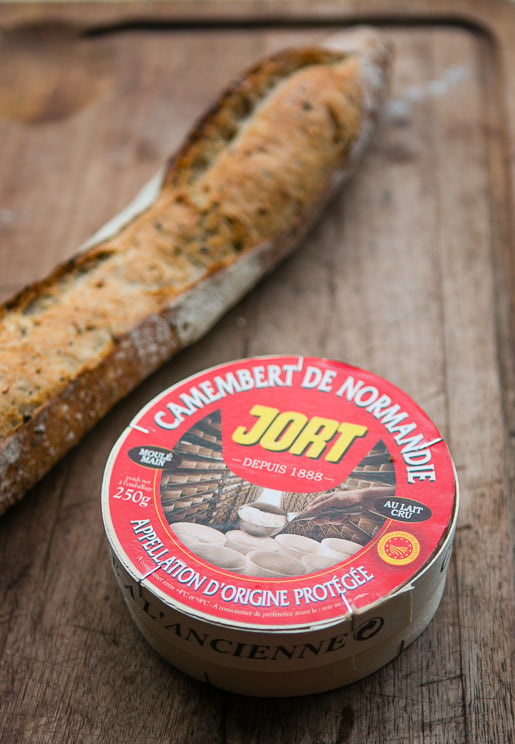 Camembert de Normandie was allegedly invented by Marie Harel in 1791. Yet French author Pierre Boisard wrote a book, Camembert: A National Myth, which disputes the story. You can read the first chapter of the book here (downloadable PDF), which delves into the subject further. But there’s no dispute that Normandy is known for its outstanding cheeses, which include Livarot, Pont-l’Évêque, and the heart-shaped Neufchâtel. 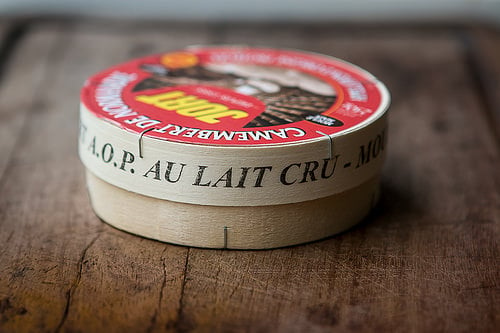 Like Brie de Meaux, made not far from Paris, lower Normandy’s proximity to Paris helped the success of the cheese. (You can drive to lower Normandy from Paris is a little over an hour.) And like Brie de Meaux and Mont d’Or, true Camembert de Normandie is made from raw milk (lait cru), and only from raw milk. And will say so on the label. Another notation will likely be moulé à la louche or ladled by hand into the molds.

In spite of how unbelievably amazing this cheese is, the last “real” Camembert de Normandie has been threatening to go out of business in their battle against the large industrial cheesemakers, that favor pasteurized milk, whose labels don’t depict dewy milkmaids ladling milk into cheese molds. Like Brie de Meaux, and the previously mentioned Mont d’Or, any raw milk cheese that’s been aged less than 60 days can’t be imported into the United States. (Parmigiano Reggiano and Comté are raw milk cheeses, but have been aged enough to be imported.) And that leaves out true Camembert de Normandie as well. 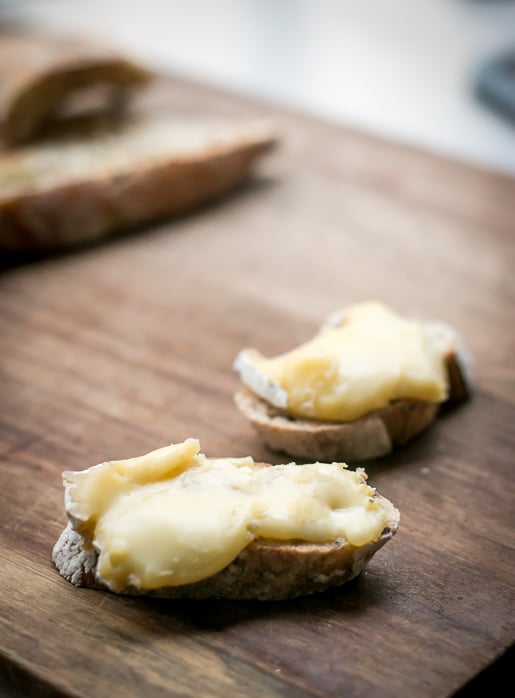 However when I was on book tour last spring, at the wonderful Pasta Shop in Berkeley, to keep my energy going, they gave me tastes of various cheeses they had, and a British camembert had almost the exact same flavor as its raw milk French counterparts. So if you live in the Bay Area, stop in and grab a wheel, because it’s quite good. (Curiously, fromages.com carries and ships French raw milk camembert, the website noting that for camemberts imported to the United States, the aging is extended to over 60 days.) 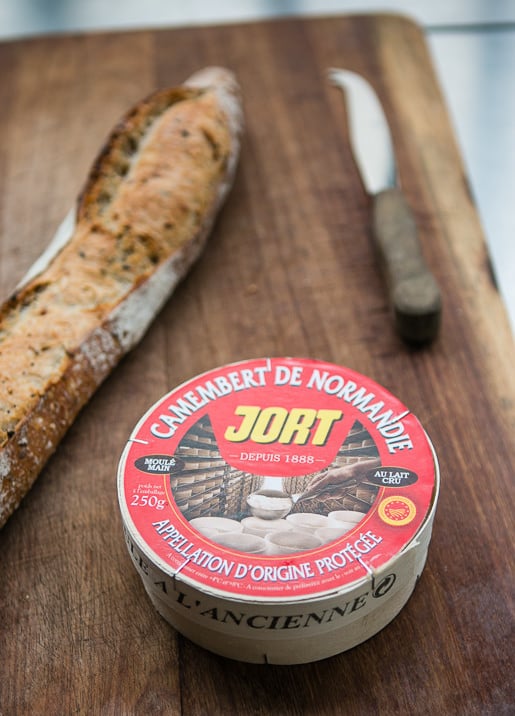 But really, the best thing to do is to come to France and grab one yourself. Even at les supermarchés, which aren’t exactly bastions of artisan foods, you can find raw milk camemberts in the dairy case. In France, a wheel of raw milk camembert will run you between €4-€6 ($5-$7.50). So if you eat as much cheese as you can in one week, the savings will pay your airfare. Although I generally prefer to buy cheese from the people at my market, when I was at the grocery store, I saw this Jort Camembert de Normandie, which a Norman friend tells me is the best of the brands. So this funky, fragrant little disk went home with me. If you buy a camembert at a cheese shop or outdoor market in France, where I recommend shopping for cheese, they will ask you when you plan to eat it, and will usually remove the top of the container and take a look at – and feel – several, in order to find the one that’s just right for you. Don’t rush this decision. 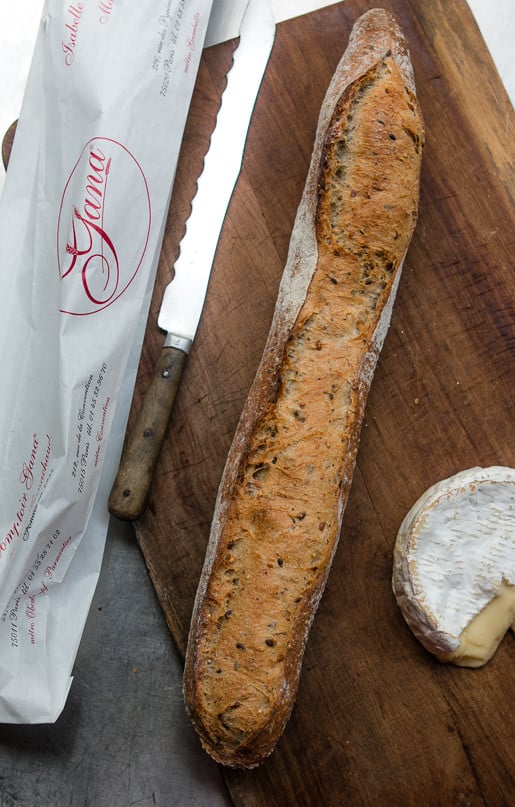 My camera didn’t get any, but the perfect accompaniment to a good Camembert de Normandie is an equally good baguette. This baguette with toasted grains is from Gana, one of the many bread shops that are on every street in Paris. In France, you don’t find cheeses served with jams, nuts, or dried fruits, except for special occasions or when dining in fancy restaurants. However a good, or great, Camembert de Normandie doesn’t need anything else, and my preference is just to let the cheese sit at room temperature for a while, until it gets soft and runny, then smear it on rounds of crisp-crusted baguette. Yes, it’s a cata (the diminutive of catastrophe) — but what a way to go… 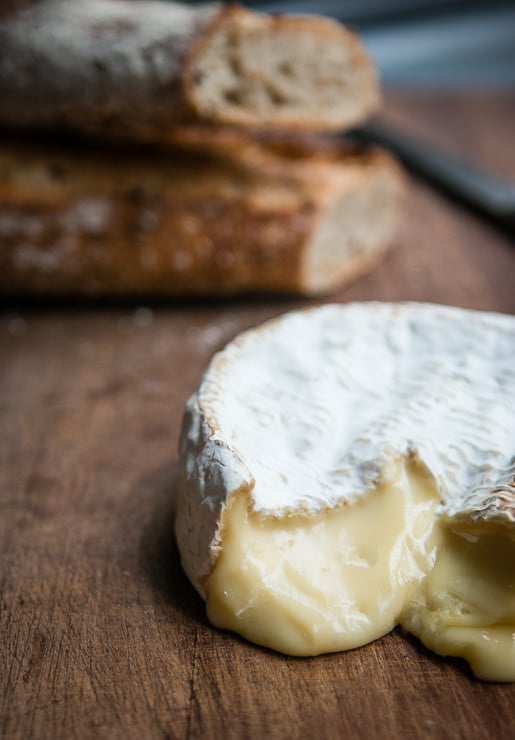 How To Cut and Slice Cheese (Culture magazine)