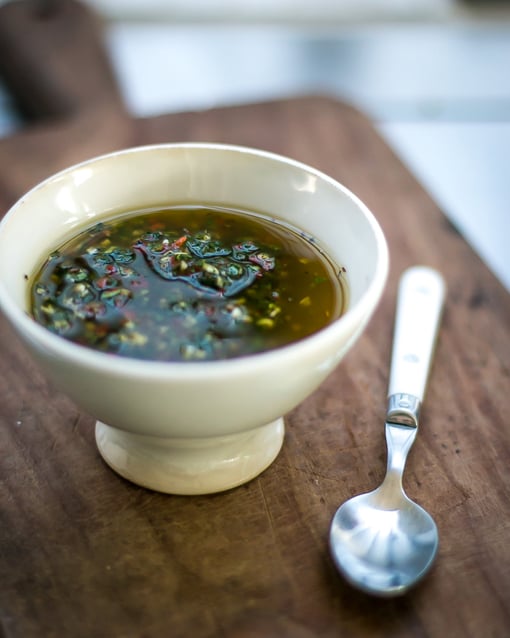 Beef is very popular in France. And it’s not just for the taste: on more than one occasion, I’ve been told I need to eat more red meat by folks concerned about my health. (I guess I need to look in the mirror more often.) I like a good steak every once in a while, and, fortunately for meat-lovers, there are butchers in every neighborhood in Paris. In fact, there are four within a two- or three-block radius of where I live, not to mention the few at my local outdoor market. 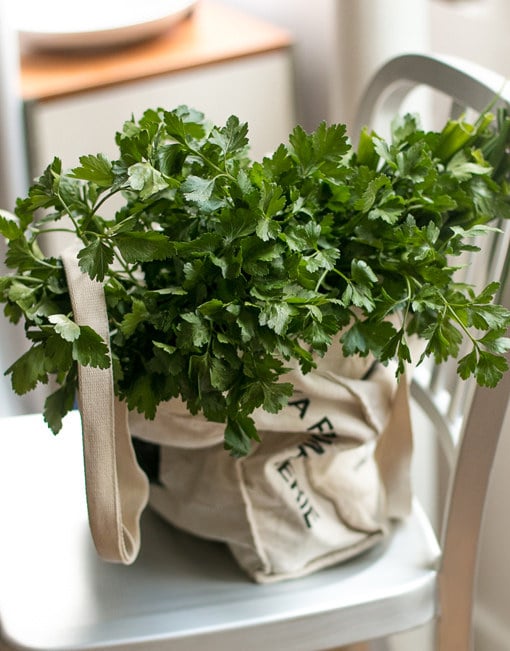 Being surrounded by so much viande, I need to keep my consumption in check so I reserve cooking beef at home for special occasions, rather than make it part of my daily diet. (Unlike chocolate.) What’s also widely available in Paris – and used extensively – are fresh herbs, particularly flat-leaf parsley and fresh mint, which are available in abundance. And it’s a rare day when I don’t return from the market with a big bunch of parsley. 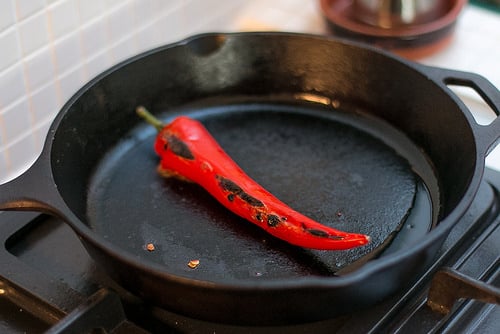 In France, it’s normal to have steak with some sort of sauce, perhaps béarnaise, a seasoned herb butter (beurre maître d’hôtel), butter mashed with blue cheese, or just a pot of the beloved Dijon mustard on the side. And plenty of frites, of course!

I had a friend coming over who is two weeks away from having a baby. And I guess I am becoming more Parisian than I thought, because I figured she could use some beef. So in addition to a massive côte de bœuf that Romain picked up from the butcher shop, I did some careful market shopping, getting some parsley, a bundle of vitamin-rich dandelion greens (which got tossed in a garlicky vinaigrette), a miscellaneous pepper, and two cheeses for after the meal: a sheep’s milk cheese made from lait pasteurisé, and a big chunk of nutty flavored aged Gouda.

In spite of the bounty of fresh herbs, fresh oregano remains elusive, but France is, indeed, the land of copious piles of potatoes, courtesy of Monsieur Parmentier. And when I was stocking up on les pommes de terre at the market for les frites, after I told the vendor I was cooking for a very pregnant friend, he threw in four extra spuds as a gift. 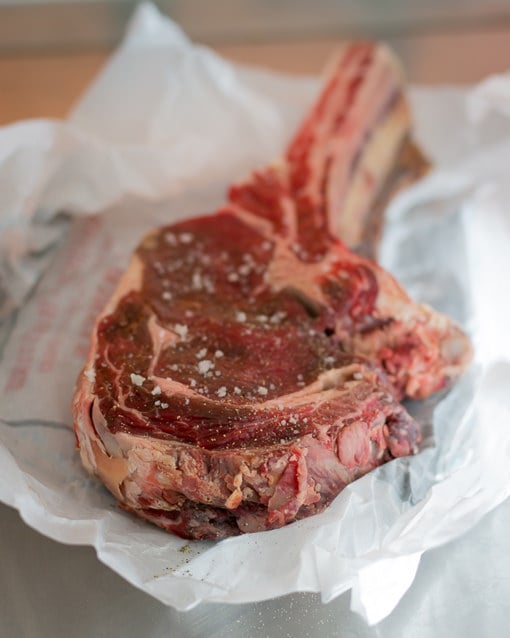 The giant steak got rubbed with salt and pepper and my grill pan was ready and waiting. In anticipation, with my generous bundle of greenery, I made an olive oil-based herb sauce, chimichurri with a grilled pepper, fresh garlic, a dose of vinegar, and a bit of fresh thyme stirred into the mix.

Some versions of chimichurri sauce get pureed, but I like chunky sauces because you can taste the individual elements. Chimichurri usually contains fresh oregano (I think I’ve only see it at a market once in Paris, and it was not in pristine condition – in addition to being frightfully expensive). I am not sure why it’s such a precious commodity, but if I had a garden, or even a green thumb, I would plant some indoors or out. 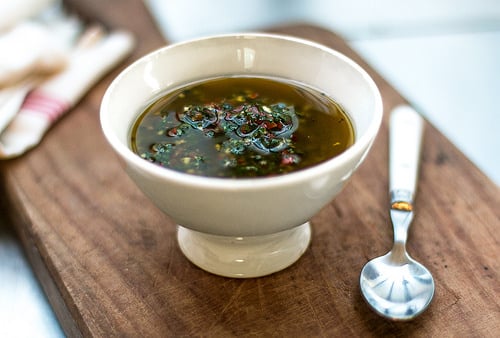 I’m not sure which variety of chile that I used, since they don’t label them as such in Paris, but mine was somewhat spicy. (It may be a Mirasol, or mature Anaheim chile pepper.) You can use any kind of pepper that you want, adjusting the quantity to your taste, depending on the spiciness of the variety. Jalapeños would work nicely, if available. But the chimichurris I’ve had were not necessarily spicy , so don’t overdo it. You want the flavor of the herbs and garlic to shine through. Because fresh oregano is elusive in Paris, I used dried. If you have access to fresh oregano, by all means, use it (and skip the thyme). You should double the amount, as indicated – or add to taste.
1 chile pepper
1/2 cup (125ml) extra-virgin olive oil
2 tablespoons red or white wine vinegar
2 teaspoons dried oregano (or twice that amount of freshly chopped leaves)
1/2 teaspoon minced fresh thyme (optional)
3/4 teaspoon salt
4 cloves garlic, peeled and minced
1/4 teaspoon smoked or sweet paprika
1 1/2 cups (15g) lightly packed leaves of flat-leaf parsley
1. In a cast iron skillet, or directly over a grill, gas flame, or under the broiler of an oven, char the pepper, turning it a few times, until the outside is blistered. Remove from heat and let cool.
2. Once cool, remove the stem, split down the middle, and remove the seeds. (You can leave them in, but they may be quite spicy.) Chop half of the pepper and add it to a medium bowl. (Reserve the remaining half of the chile for another use.)
3. Add the olive oil, oregano, thyme (if using), salt, minced garlic, and paprika, and stir. Finely chop the parsley and stir it into the mixture. Taste, and add additional salt and vinegar, if desired.

Note: Although chimichurri is traditionally served with beef, it makes a fine accompaniment to lamb, can be tossed with warm pasta, and is nice swirled in soups, such as celery root soup.

Storage: Chimchurri is best served the day it is made. If necessary, it can be stored overnight at room temperature.