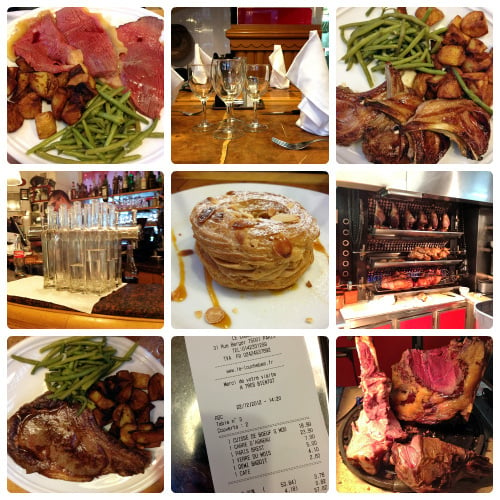 Where do you go on a rainy afternoon if you find yourself near the middle of Paris? Quite a bit of the town has emptied out, as people make their exodus away from the city for the holidays. Those of us here are celebrating at home – or from the looks of things out there – doing a little last-minute scrambling for holiday gifts. There are cases of oysters on the sidewalk, sold by the dozen(s), and store windows are featuring foie gras, Champagne, candied chestnuts, and a few early galettes de rois (frangipan tarts.)

We were out-and-about near Les Halles, where the city has finally torn down the building which many feel has been a blight on the city since it was built, so there’s a bit of construction going on around there while they work on the new project. But those folks, too, seem to have taken a holiday breather as the regular sounds of jack hammers and cranes were replaced by, well, nothing. The neighborhood was well known for the giant Les Halles market, which had been replaced by Rungis out by the airport, but a few of the restaurants that retain the feeling of the era have remained.

Le Louchébem is a rôtisserie, with the long, late hours of a bistro, which hasn’t been there as long as others, but is a reliable place for a meal – but only if you like meat. And lots of it. I won’t say anything about the green beans, except you don’t really go to this kind of restaurant for the vegetables. But the meat coming off the spit, and being carved up and plated is pas mal. Upon entering, I asked in my American-accented French for a table for two and the host asked me if we wanted to lunch upstairs. I haven’t been up there, but downstairs seems to be where all the action is. So my other half said in French-accented French that we wanted to eat downstairs, and they directed us to a seat by the window.

I guess cuisse de boeuf (beef thigh) isn’t well-known, or is a cut that’s usually done in France, because it was a new one for my other half. But after taking a look at it at the carving area, and he saw how bleu (very rare) it was, he wanted that. (Many French folks prefer their meat very, very rare – I find I can’t slice or chew meat cooked that way, so I go for saignant, or medium-rare.) I had carré d’agneau (lamb chops) which were fine, and appropriately fatty with a glass of the verre du mois (wine of the month), which was passable but should have been lush and ample, to go with the beef and lamb, rather than thin and fruity. And I’d wait until next month before ordering a the wine-of-the-month again.

Some desserts are house-made, which is nice and they note which ones on the menu are. But we went for the Paris-Brest made by the nearly bakery, Julien. Filled with a thick paste of caramelized hazelnuts and a few scribbles of caramel, we made quick work of it then downed a petit café and were soon back out the door, into the quiet, rainy streets of Paris.

The Cookware Shops of Paris