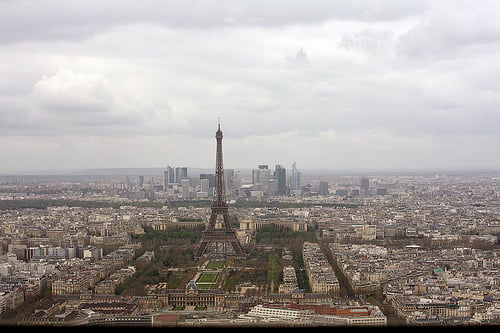 Most people already know that a good view doesn’t necessarily go hand-in-hand with a remarkable culinary experience. But I’d gone to Ciel de Paris many years ago and found the food pas mal. And to top it off, it was reasonably priced, which is so often not the case in places that tend to attract out-of-towners. But what’s truly the draw here, aside from the 70s decor, are the views from the top of the Tour Montparnasse, which are unparalleled in Paris. The views are even better than the views from the Eiffel Tower, since you get to peer down on the famous tour, which was once just as reviled as the blocky Tour Montparnasse currently is.

Unlike those philistines that didn’t like the Eiffel Tower when it was built, I think I am the only one in Paris that doesn’t mind the Tour Montparnasse. The black rectangle lurking in the background of Paris isn’t nearly as objectionable as a number of some of the recent modern buildings, such as Les Halles (which is currently getting a makeover) and the Opéra Bastille. 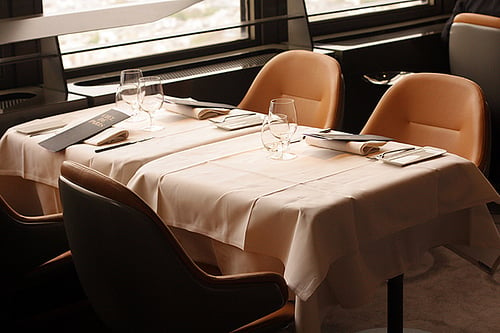 Modern architecture rarely gets to be redone, but the interior of Ciel de Paris had been updated and remodeled (remodels can go either way in Paris and I get very depressed when I see beautiful old bistros being torn down, to be replaced by upscale “cafés” with clear lucite furniture and chandeliers, potted palms, and mirrors and gold leaf on the walls) – so I was very happy to see that the team at Ciel de Paris had kept the time-warped chairs and lighting, and simply refreshed and refurbished the place. They also have a new chef and I went with a friend one sunny afternoon to check it out. The hostess was incredibly nice, as was the rest of the earnest staff. Of course, there are a number of tourists, but aside from a few groups dining on the raised balcony (a great idea since groups can be boisterous, and from the lower tier, you could barely hear them), most of the folks at lunch were French. 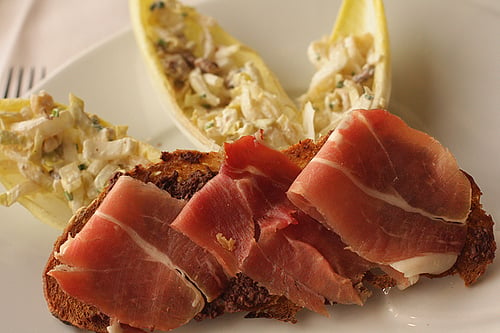 The lunch menu is €29 (two courses), or €38 (three courses), each with coffee. (Prices subject to change.) When we were about to be seated at a table just one table away from the window, I’d asked if we could sit next to the window and they said that that table was taken. When I asked the hostess how they decide who gets to sit there, she said it was whoever reserved first – l’égalité, I suppose. Since we’d reserved just a few days before, I’ll take her word for it. But if you want a seat right next to the window, you might want to reserve farther in advance than we did. However at dinner, you can reserve a balcon (balcony) table, or a windowside one, at different prices. 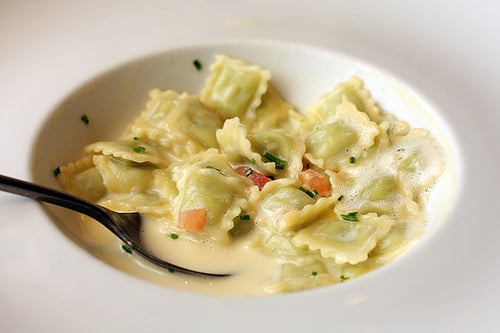 At dinner, there is a menu “balcon” menu that is €65 and another “Grand Ecran” (€114) that includes “Dîner au Champagne Canard-Duchêne brut Rosé
1 bouteille par personne.” When I asked if that really includes one bottle of Champagne par personne, they said “Oui!” – so if you choose that menu, be prepared for a good time! (And plan to walk..or take public transit, home.) 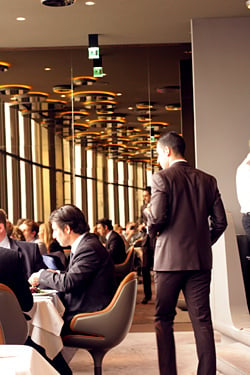 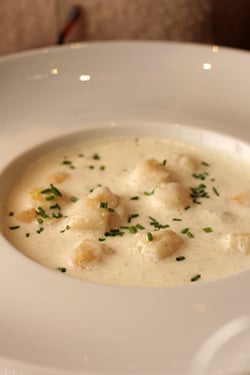 For the first course, my friend had tiny raviolis in a fondu au comté, which were delicious – and rich. So much so, that I had to help her finish the cheese-filled squares of pasta. I began with Tartine de jambon Serrano, an open-faced toasted piece of sourdough bread spread with tapenade (olive paste) draped with country ham and a salad of walnuts and horseradish tucked in Belgian endive leaves.

We both went with Pétoncles with leeks and piquillos in beurre blanc for our main courses. You rarely see bay scallops in Paris so I was concerned they’d be previously frozen. But they tasted sweet and fresh to me. (And since I hadn’t had a full-bottle of Champagne, my senses were still pretty much in fine working order.) 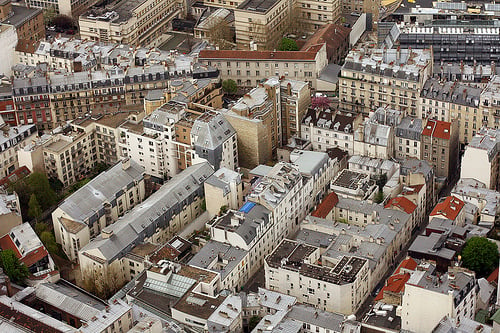 The bread, however, had an odd flavor to me and wasn’t so great, which is irksome in a city filled with very good bakeries. Bread expert Steven Kaplan brings his own baguette when he goes out to eat, although I’m not there, yet. Since we were both in the middle of a work day, we each had a glass of Sancerre, which were generous and although no one was holding up the bar at mid-day, there is a Champagne and cocktail bar where you can drink in the view of the place, and Paris, for the price of – well, just a drink. 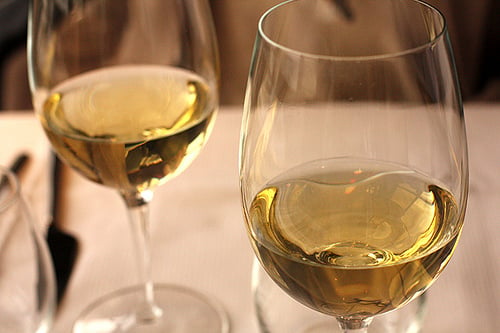 Dessert was a tangy Lemon Meringue Tartlet with tart lime sorbet with was a nice way to end the meal, then we finished up with two coffees and mini financiers and pâte de fruits. 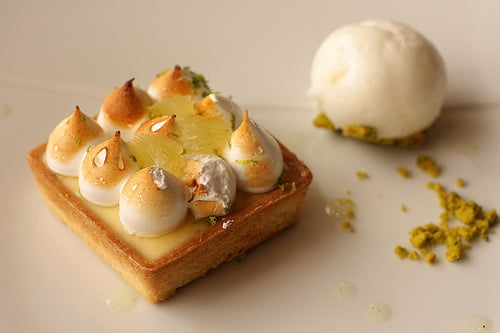 Folks often ask me about romantic restaurants in Paris, or places to celebrate a special event. And even though my days of special events (and romance) are winding down, I’d say this is one place that fits the bill. 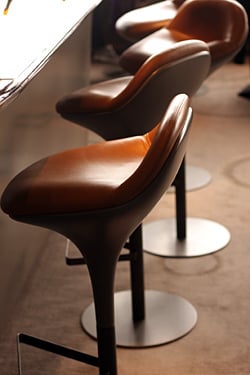 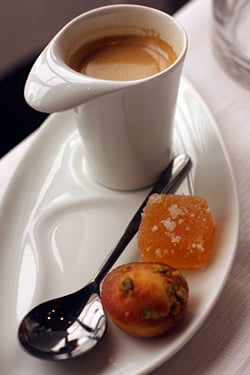 With food that is a vast improvement over the standard “restaurant-with-a-view” fare, engaging servers, and a view that just doesn’t quit, Ciel de Paris reaches higher than you might expect. 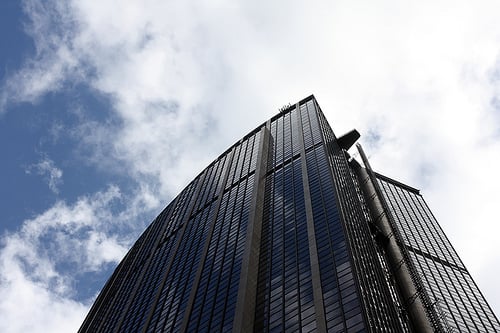 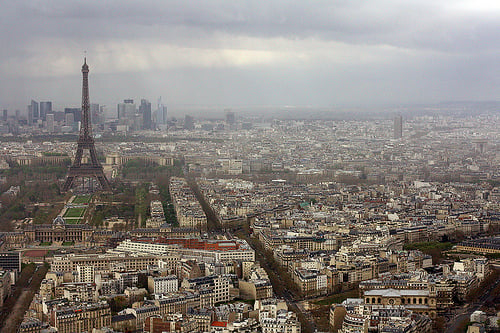