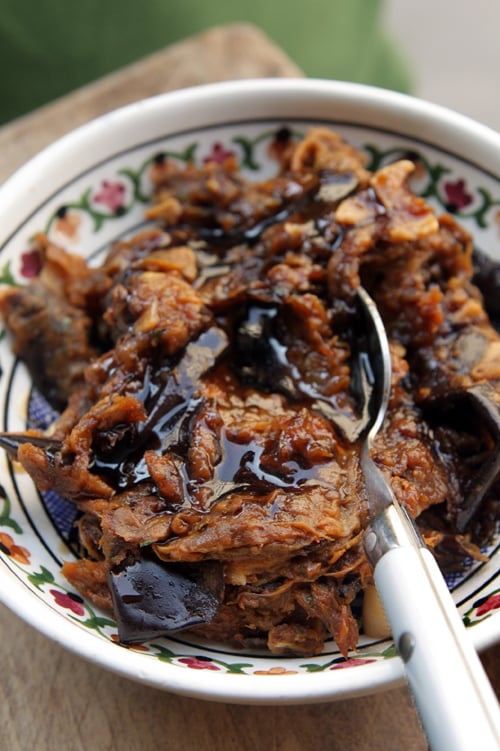 The words “eggplant” and “jam” together might throw you, but if you stop to consider that eggplant – like tomatoes and squash – are botanically fruits, the idea doesn’t seem all that far-fetched. And this combination of sweet and savory is so delicious, there’s no reason to hesitate whipping up a bowl.

I love foods from the Middle East and North Africa, and I was leafing through one of my favorite books, From Tapas to Meze by Joanne Weir, and came across this jam. I’m a big fan of eggplants, which is a good thing since they frequently show up in foods of the Middle East, as well as in dishes of their neighbors in North Africa. And even though I could happily eat my way through all of those countries, luckily in Paris, they’re abundantly available here as well. 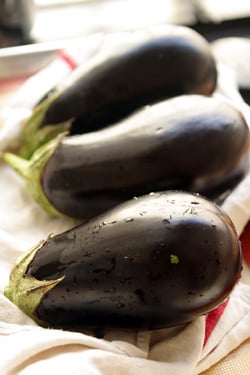 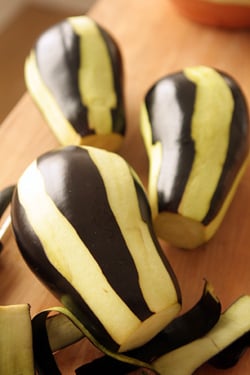 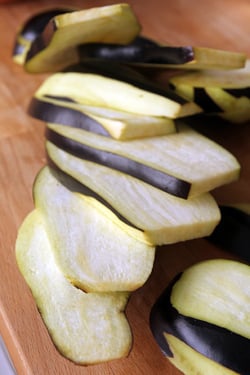 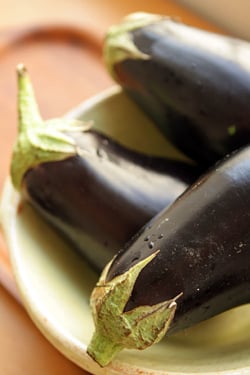 This is one of those recipes that you don’t need to spend a few days shopping for all the ingredients. You just need three eggplants, some spices and garlic, and olive oil, all of which you probably have on hand. But for a dish with just a few ingredients, the results are complex, yet adaptable to a variety of cuisines. If you liked skewered meats, it would be a marvelous condiment alongside. And for those across the Atlantic, it could dress up an all-American hamburger – or a lamburger, if you’re so inclined.

The subtle dab of harissa, the fiery hot sauce, gives it a tantalizing little kick, and Joanne recommends using this eggplant jam as a spread on warm grilled bread. I served it as part of a summer dinner this weekend composed entirely of bowls of appetizers, dips, olives, salads and, well-chilled wine, which is how I like to eat…and drink. I put everything in bowls and let guests help themselves, and this dish got the most accolades. 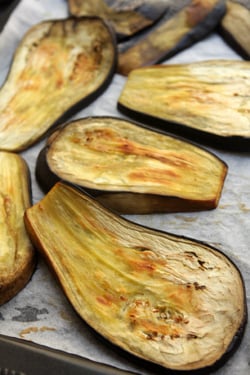 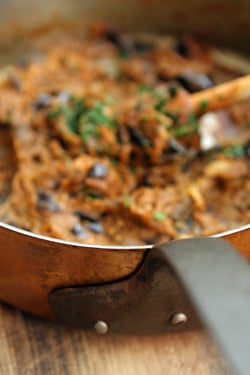 As I was putting everything on the table, at the last-minute, I added a few dribbles of syrupy pomegranate molasses over the top of the jam, whose sweetness contrasted wonderfully with the richly spiced eggplant. 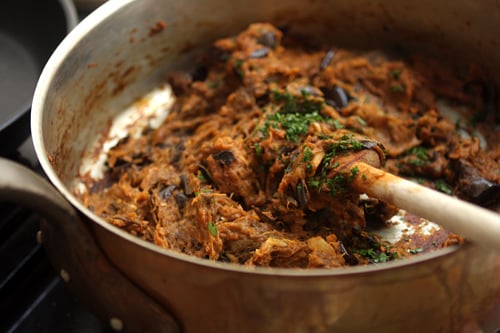 Adapted from From Tapas to Meze (Ten Speed Press) by Joanne Weir The amount of salt will vary, depending on how much you use to salt the eggplant, and what salt you use. So you may need to adjust it before serving.

Storage: The Eggplant Jam will keep for up to five days in the refrigerator. Serve slightly warm, or at room temperature. Note: Pomegranate molasses, which is sometimes called Pomegranate Syrup, is available in stores that specialize in Middle Eastern and North African products, or online. You can also make your own pomegranate molasses as well.