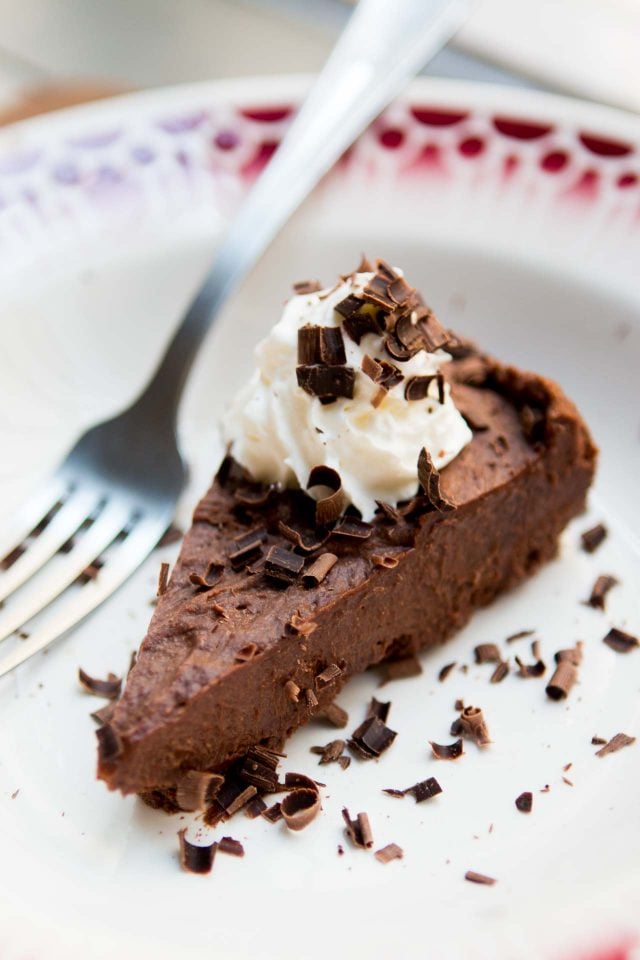 There’s one thing difficult about living in France. And that’s getting recipes from a French woman. It’s not because they closely guard their secrets (which every woman has the right to do), but it’s because they frequently use recipes as guidelines, rather than making them by following exact proportions and fixed preparation times.

So if you ask a question about a recipe, you may get a response like —”Well…that’s because it’s the always the way I’ve always done it.” Which was what I was told when I read the instructions on the hand-written recipe I snagged from Romain’s mother for this Chocolate Mousse cake. It said to “dip the bottom of the bowl of melted chocolate in a larger basin of cool water to bring down the temperature.” Whereas practical old me would simply let it sit on the counter until it was cool. 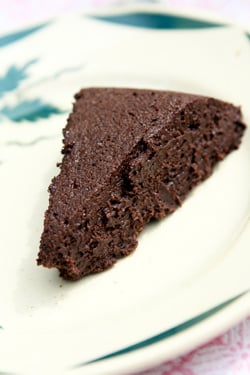 Cake pan sizes are rarely mentioned and other systems of measurements, like the imperial system, aren’t ever given. I kept imagining how much easier writing a cookbook (and a blog) would be if I could give instructions like that. French cooks are happy to add a little more or this, or take out a little bit of that, and variations are just part of the recipe, which isn’t expected to turn out the same way twice. At least that was my experience baking with Romain’s mother. 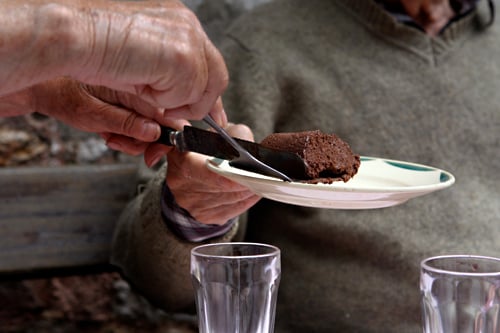 She leaves most of the regular cooking to her husband (who is a very good cook) but takes over the baking duties herself. She made the cake for me and I was floored at not only how rich and chocolaty it was, but by the unusual method of preparation. It’s technically called Gâteau de Pape, or “Pope’s Cake”, but she didn’t know why. And a quick online search revealed nothing out there fitting that description. But she showed me her recipe, written on the back of an envelope, and we went to work on it. 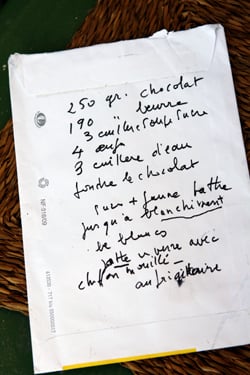 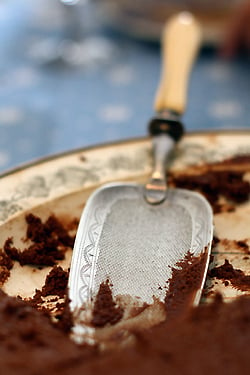 French people also don’t have all the gadgets and batterie de cuisine that Americans have; I haven’t seen all that many avocado peelers or automatic butter slicers in the kitchens of French people. Most newcomers to my apartment enter and immediately hone in on my electric stand mixer as if I had a spaceship that could travel to the moon, in my kitchen. I had some questions about this recipe after reading it, and I brought along a scale. 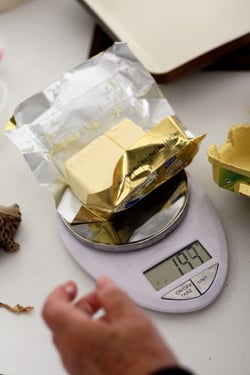 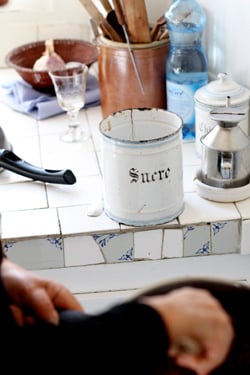 So we cut, sliced, measured, and melted. I had to do a little math because the usual Nestlé chocolate bars that almost everyone uses in France for baking are sold in 200 gram tablets. She said she used “One-and-a-half” bars for the cake, and we had a little disagreement about that since in my book, that’s 200 + 100 grams = 300 grams. (And her handwritten recipe said 250 grams.) But I had a scale on my side, so with some reluctance, the exact amount of chocolate used was mutually agreed upon. 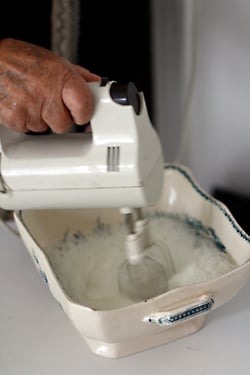 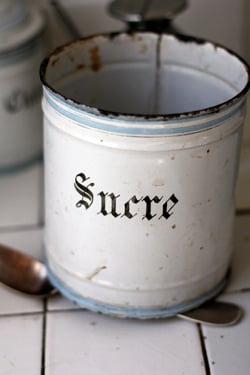 When we got into the actual making of the cake, she realized her sugar tin was empty but said she preferred to use light brown sugar anyways and crumbled in a few of the cubes that were in the sugar bowl instead. Because I’m such a good guest, I let her get away without weighing them. She also insisted on using a very worn down wooden spoon for folding in the egg whites, and used a vintage square tureen for whipping them first.

When I noticed a modern blue silicone spatula sitting in the utensil crock and asked why she didn’t use it, she said that she liked the wood spatula she was using, which was like folding in the egg whites with a chopstick. 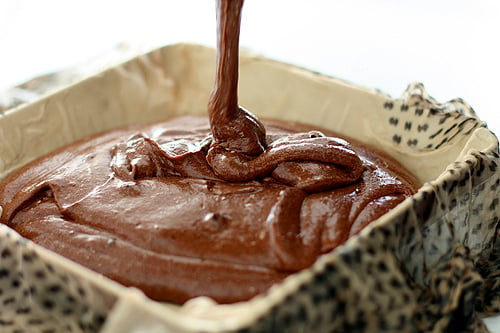 One might say that this Chocolate Mousse Cake isn’t spectacularly high, or perfectly proportioned, or whatever…which is fine with me. I must be becoming French. And it does vary in texture; I’ve had it when it’s relatively firm and sliceable, and other times, a spoon would be the more appropriate serving utensil. 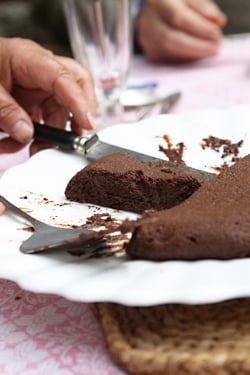 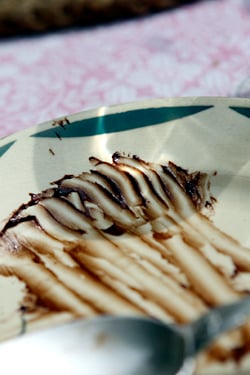 Most of the French people I know don’t shy away from using raw eggs. If you have concerns about eating uncooked eggs, buy eggs from a trusted source, like at a local farmer’s market. They cost more, but I’m okay spending a little extra on an egg if I’m feeding it to my favorite people. And honestly, I can’t think of a better place to spend my hard-earned money than on a chocolate dessert as good as this French chocolate mousse cake. 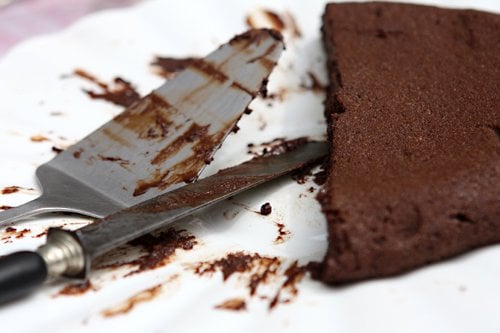 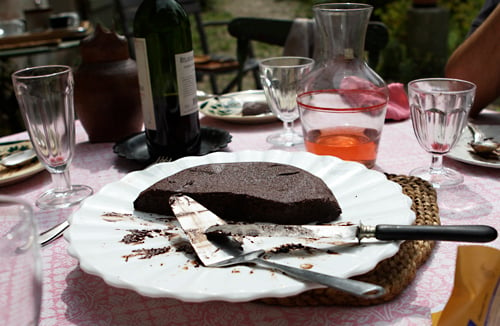 You'll notice she uses an old scarf to line the cake plate, but you can use cheesecloth or muslin, called étamine in France. I was told that it was best eaten two days after it’s made, although once it's thoroughly chilled, I think you're good to go. It does slice more easily when cool, but tastes better when the slices are closer to room temperature. (Think of that as another French paradox.) Lastly, don’t worry if your cake isn’t sliceable; if not, simply serve portions with a large spoon. It will taste just as good.
Servings 8 servings

To serve, open up the towel and invert onto a serving plate. To get very clean slices, you can either wave a sharp knife over a flame and slice it with the warm blade, wiping it clean between each slice. Dipping it in a pot of very hot water works, too. You could serve it with whipped cream or vanilla ice cream, but the cake is often served by itself.

Eggs Without Fear of Salmonella