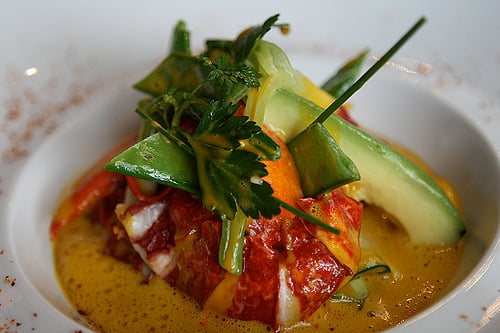 You’re probably thinking that I’m a little crazy saying that a meal that’s going to set you back a hundred bucks is a bon marché. I don’t know about you, but that’s not pocket change, even for a bon vivant like me. 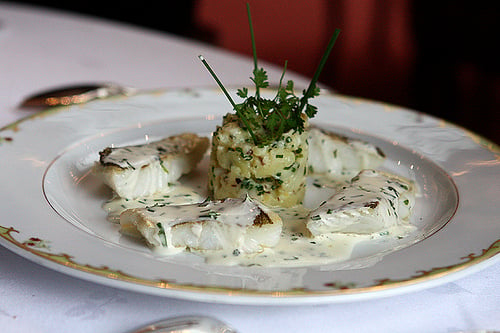 The first time I went to a three-star restaurant in Paris was about six years ago. After my female friend and I got our menus (women don’t get menus with prices; high-end French restaurants are not always equal opportunity operations), she grabbed the menu out of my hand, allowing us equal opportunity to both almost pass out at the prices.

She was from New York City and to be honest, I don’t think Manhattan or San Francisco are considered cities for fine dining at bargain prices. The pre-fixe menu was €405. Per person. Good gosh, that’s a lot of money, especially if you add a bottle or two of wine to l’addition. I know there are a certain amount of people love to dine at that level and are happy to pay the price. And normally, I’m not one of them. 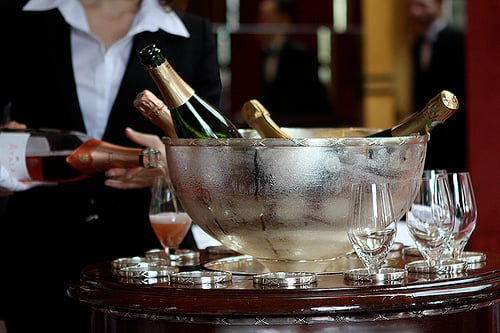 But sometimes one must eat their words and I did dine at a three-star restaurant and the roasted chicken for two, priced at €180, was so good, I thought I was going to pass out. And this time, not because of the check.

When you eat in one of these temples of haute cuisine, you’re not just paying for the chicken on the plate, but you’re paying for all the accoutrements that go along with it. One thing folks often use as a barometer for a “good” restaurant is how much food is on the plate, and that’s it. I can’t tell you how many people have told me they didn’t like a restaurant because they didn’t leave gut-bustingly full. In these types of places, you’re paying for the service, the location, the linens, and the seven people hovering nearby, making sure everything is a-okay. Heck, they’ll even take you to the bathroom, if you want. (I usually just have them point the way, then I take if from there.) 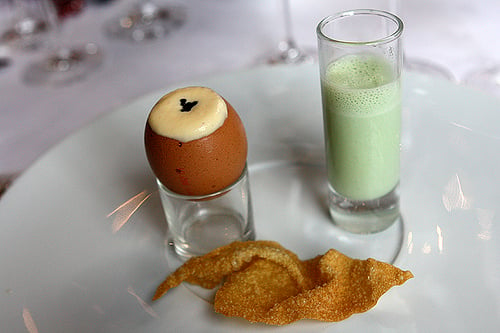 You likely aren’t racing to the phone to reserve a seat to eat a chicken that costs the equivalent of a couple of months of cell phone service. And you’re probably going to think I’m out of my mind for suggesting that on your next visit to Paris that you can have possibly have a similarly transcendent experience for a fraction of that cost. But many two- and three-star restaurants in Paris offer a special lunch menu that runs between €65-€80 per person, which is a great dining deal. 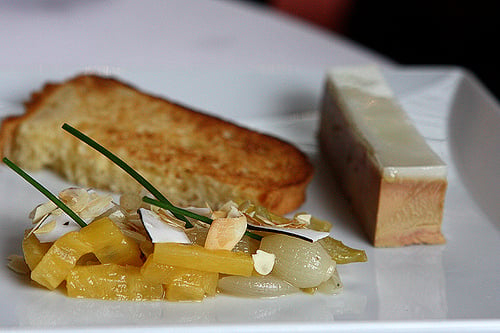 A lot of folks come to Paris on a budget. That’s fine; there’s plenty of places you can eat well for less than half of that. (You could also drive a used car, or own a spiffy new one…it’s your choice. They both serve the same function.) And I was recently amused reading comments in an article about budget dining in Paris, where a reader suggested going out for Pho (Vietnamese soup) was a better for the author, whose suggestions ran in the vicinity of €15, to save a couple of bucks, which is ridiculous. I like Asian food myself, but that’s like going to Tokyo for a week and ordering a peanut butter sandwich because it’s a bit cheaper than a bowl of ramen from a noodle stand.

Doing the math, since in France tax and service are included (which is about 20% of the check) that meal is actually valued at €55*. If you went to an upscale restaurant in New York or San Francisco, you’d easily pay much more than that.

I checked dinner menus at two excellent restaurants, Craft in New York City and Boulevard in San Francisco, and main courses average $35-$39, and neither includes tax or tip, which brings them up to a similar price. And that’s only for one course. 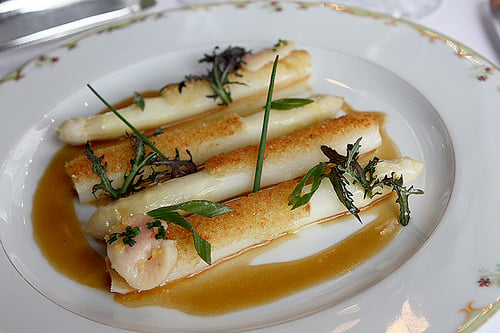 Le Grand Véfour, Taillevent, Le Bristol, Les Ambassadeurs, Ledoyen, Pierre Gaignaire, and La Grande Cascade, where I recently enjoyed an outstanding meal (as shown in these photos), are some of the starred restaurants that offer special lunch menus.

Some critics say that the best way to experience these restaurants is to order the full-on menu dégustation, which can run upwards of €300 per person. That’s great. And if they feel that strongly about it, ask them if they’ll pick up your tab. 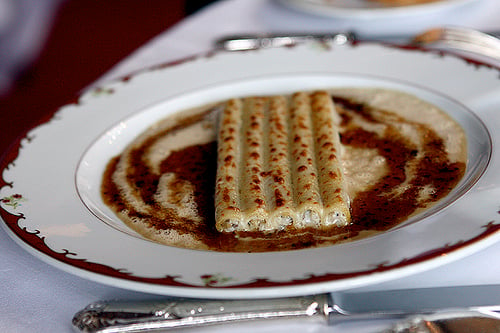 A tip: Normally they waiter will present the regular menu first, and then bring the supplemental one. If they don’t, just ask. Some, like Le Jules Verne, don’t offer special menus on weekends, or conditions may have changed. Check the websites or confirm when reserving to avoid surprises. 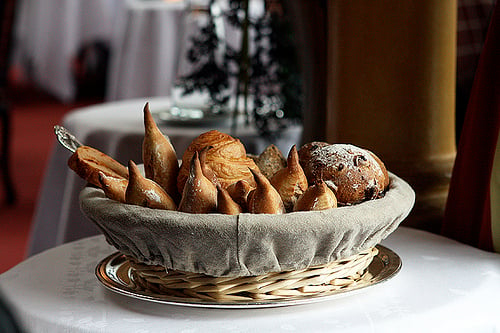 The bread is usually house-baked and the butter is invariably equally amazing. I’ve had the best butter of my life in three-star restaurants, and one was kind enough to point me to a shop that carried the same one. That alone was worth the price of the meal. 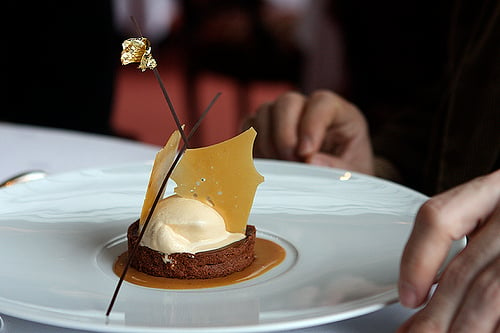 Don’t feel embarrassed; the waiters, the hosts, and rest of the staff couldn’t afford to normally eat there either. They would likely order the special menu themselves, and they’re not looking down on you.

Do be aware that extras, like a pre-lunch glass apéritif or adding the cheese course, can each add €20 or more to the tab. Those you might not want, but do order coffee, since it generally includes little treats, like macarons and other mingardise to send you off on a sweet note. 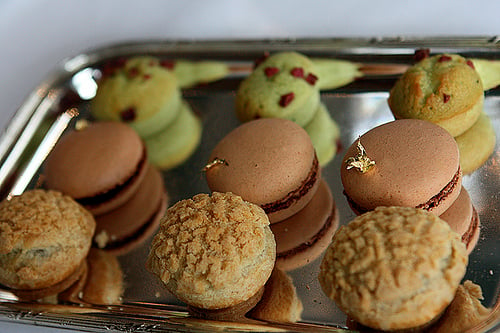 Of course, not everyone can or wants to spend that kind of money on a meal. It’s not Paris on $10 a Day. But for less than a hundred dollars—around what you’re pay for a visit to Disneyland Paris, you can have a sumptuous Parisian dining experience that will last for a full afternoon. And you’ll likely save a little extra by skipping dinner that night, too.

*Due to currency fluctuations, the exchange rates change. Restaurants in Paris, of course, set prices for local clientele. So for the sake of comparison, I used dollar and euros as a point of reference, even though they are not always equivalent.

Note: This post was prompted by a recent meal which was part of a special lunch designed to showcase the talents and menu of chef Frédéric Robert at La Grand Cascade, tucked away in the Bois de Boulogne, in Paris. The meal was complimentary and normally costs €65 without wine, €85 with two glasses of wine. The photos are taken of the food that was served at lunch, which changes daily.

The tubular pasta dish, shown in the post, Macaroni farcis au céleri rave, foie gras et truffes noires gratinés au parmesan was filled with celery root puree and foie gras, and perfumed with an entirely unreasonable amount of black truffles, and is the chef’s specialty, which wasn’t on the €65 pre-fixe menu that day. I don’t know if it makes it there, but the woman seated next to me offered me a bite, and it was one of the best things I ever ate.

(Places in the modest budget range are noted with a € or €€)

The Best Duck Confit in Paris