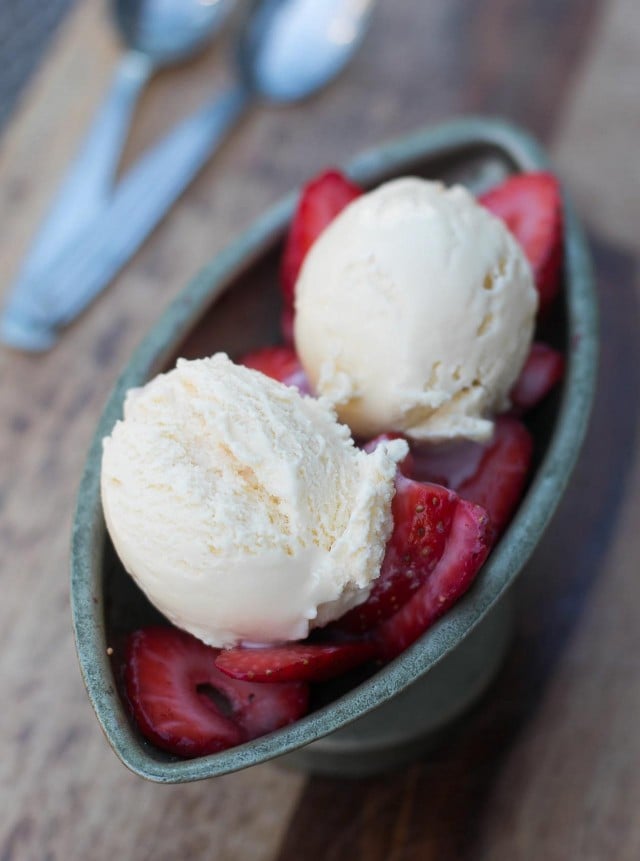 I didn’t fall in love with chestnut honey right off the bat. When I took my first spoonful from the jar, I took a little too much and recoiled from the bitterness. While celebrated in some cultures, some of us are less-accustomed to bitter flavors. I can’t eat bitter melon, for example, but I have come to love chestnut honey, especially when dribbled over toast with butter, fresh ricotta, or vanilla ice cream. In those cases, it’s magically transformed into a honey experience different from you might have expected, its assertive flavor tamed by the creamy elements. 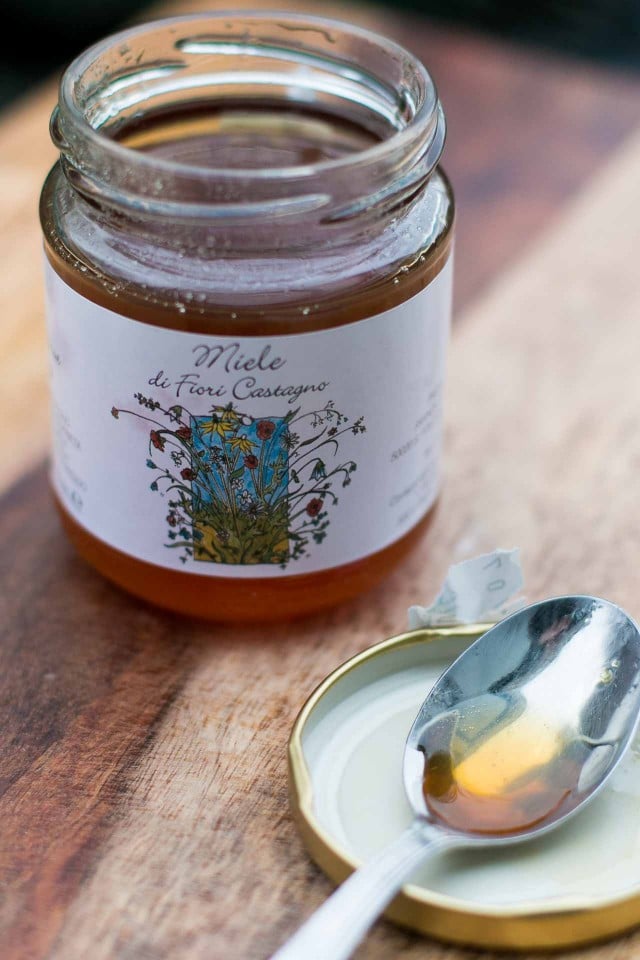 Chestnut honey has an unmistakable flavor, which could also be described as a little smoky, and kind of spicy, and you just might find yourself craving it over and over, like I do. Although I’ve learned that a little goes a long way. We get miel de châtaignier in France although I think Italian chestnut honey is the most prominently available outside of Europe. It can be a challenge to find in the United States, unlike buckwheat honey, which is more common because it’s made in America. 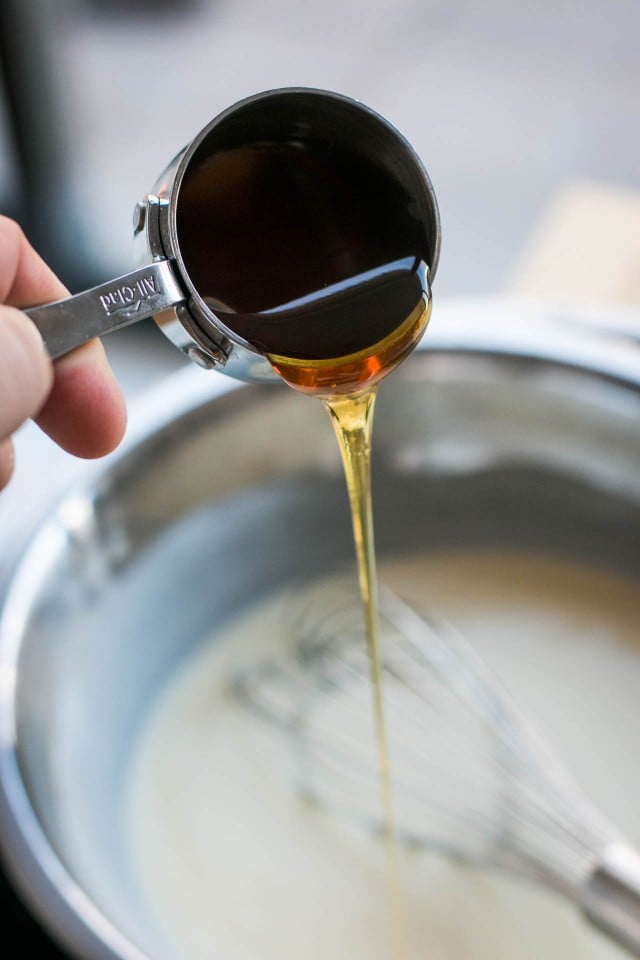 Both buckwheat and chestnut honey are brusquely flavored, although each is different, and I’m hooked on the two. Europeans eat, and shop for, honey by variety – much more so than Americans. Some honeys are said to have health-giving properties and in France, they’re sold along with a spoonful of advice as to which variety will help you with one of the ailments that you have.

And if you ask, the French discuss them openly: I had a honey vendor ask me if I was constipated while I was perusing his honey selection at an outdoor market. Wasn’t sure that was the right place to be discussing my digestive tract, but you get into the habit of openly having those kinds of discussions in France. Just like I’ve gotten into the habit of swiping dark honey on my morning toast after it gets a liberal swipe of salted French butter. 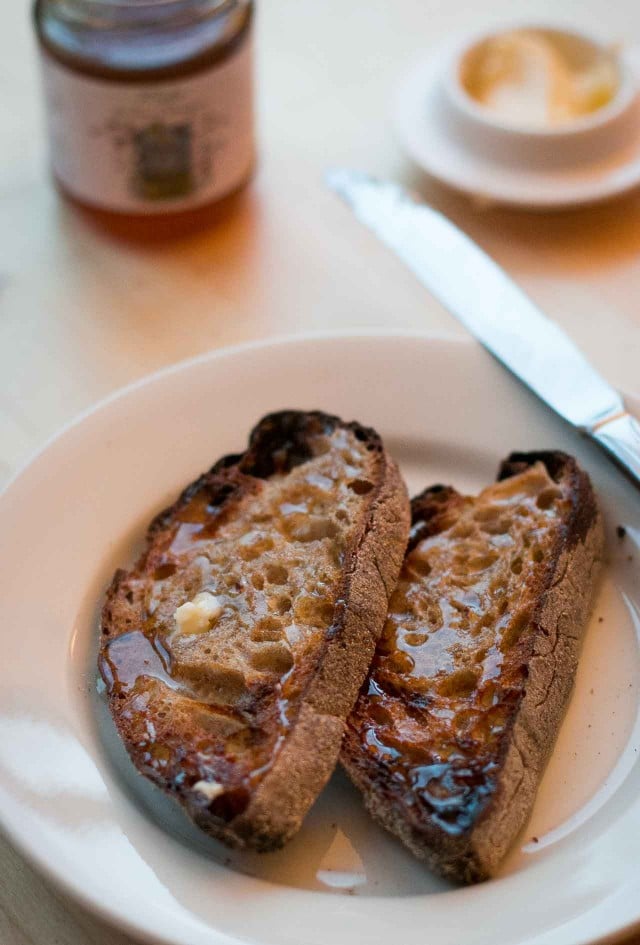 When he found out how much I love chestnut honey, my friend Rolando Beramendi of Manicaretti sent me a jar of chestnut honey that he exports, and added that he loved to make honey gelato from it. (He is a wholesaler, but the chestnut honey, and his other fine Italian products, are available from Market Hall Foods.) While chatting with Rolando – who is Italian – he asked me about Americans not having an affinity for wild, dark and bitter flavors. I thought about it, and we do like those flavors in some respects: We eat bitter greens like broccoli rabe and kale, as well as rye bread, rhubarb, lemon, beer, whiskey, buckwheat (and buckwheat honey), and barbecue, which isn’t bitter, but has smokey, woody, and earthy flavors. 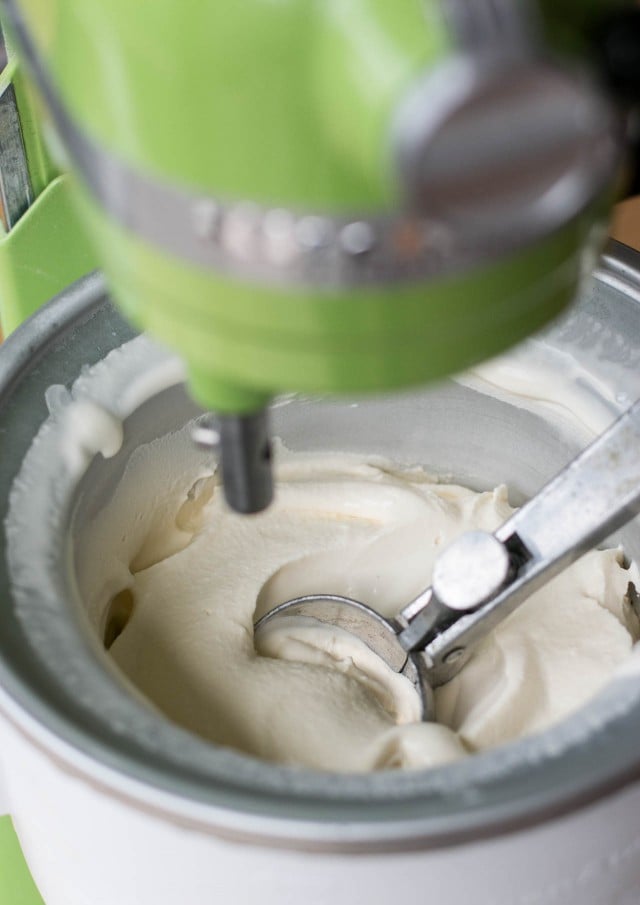 Curiously, a few days before, we’d had lunch with an American friend of ours who lives in Italy and writes about Italian food, and the subject of how Italians don’t crave spicy foods, while we were spreading spicy ‘Nudja on bread at a pizzeria in Brooklyn. I’d never had it – boy, is that stuff good! – although they said you wouldn’t find the sausage-like spread that spicy in Italy. When I mentioned the red chile flakes and other spices sometimes found in Italian dishes, they both said that they are not common. But in general, it’s hard to generalize about entire cultures, generally speaking. 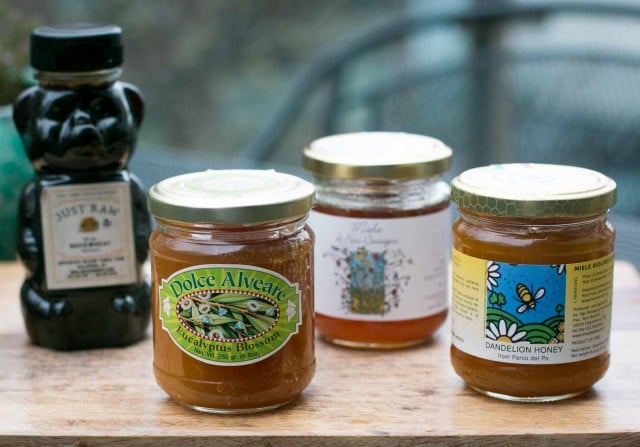 If you can’t get chestnut honey, you can use another strongly flavored honey for this ice cream, such as buckwheat honey, which is rare in France. (Most of it that’s available comes from Canada.) In France, pine honey (miel de sapin) is strong and quite tasty…and is a diuretic, in case anyone asks. Another good, strong French honey is miel de bourdaine (buckthorn). Or you can go to your local honey shop or stand at the market and taste some samples…but prepare yourself for a little interrogation about your inner workings. 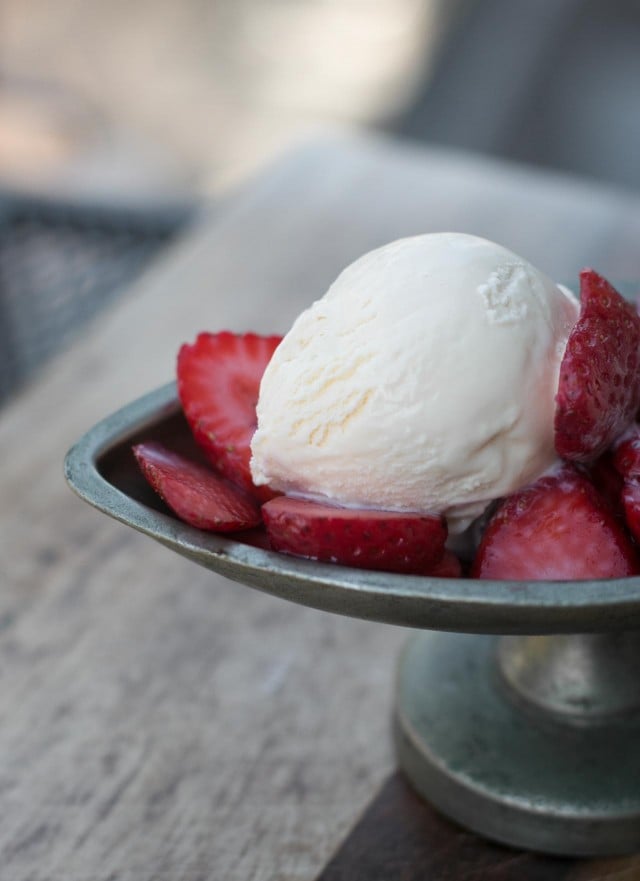 For those who have issues with homemade ice cream getting too hard, because of the honey, this ice cream stays soft and scoopable – even right out of the freezer. It’s nice just as is, but one could serve it with crumbled nut or sesame brittle (there’s a recipe for that in The Perfect Scoop) on top, or toasted hazelnuts or almonds. You want to pair it with something to compliment the honey flavor, not compete with it. (Sorry chocolate!) Spring and summer fruits work really well, such as rhubarb, strawberries, apricots, plums or peaches, when in season.

Adapted from The Perfect Scoop The honey gives the ice cream a smooth texture, but be sure to add it after cooking the custard: honey is slightly acidic and can cause custards to curdle. Perception of sweetness changes if mixtures are cold, so you might want to taste the chilled ice cream custard before churning. If you’d like to add a tablespoon or two more of honey, you can. If it’s very thick, warming it slightly will help it incorporate. If you don’t have an ice cream maker, you can freeze this ice cream following the instructions here.
1 1/2 cups (375ml) whole milk
1/4 cup (50g) sugar
pinch of salt
1 1/2 cups (375ml) heavy cream
5 large egg yolks
6 cup tablespoons (90ml) strongly flavoured honey (such as chestnut or buckwheat), or 1/2 cup (125ml) mild-flavor honey
1. In a medium saucepan, warm the milk, sugar and salt.
2. Pour the cream into a medium bowl and set a mesh strainer on top. Nest the bowl in a larger bowl half-filled with ice and some cold water, to make an ice bath
3. In a separate bowl, whisk together the egg yolks. Once the milk is warm, slowly pour half of the warm milk into the egg yolks, whisking constantly. Scrape the warmed egg yolks back into the saucepan.
4. Over medium heat, stir the mixture constantly with a wooden spoon or heatproof spatula, scraping the bottom as you stir, until the mixture thickens and coats the spoon.
5. Pour the custard through the strainer, stir for a minute or so, until tepid, then mix in the honey.
6. Chill mixture overnight. The following day before churning, taste the custard and add additional honey, if desired, then freeze the mixture in your ice cream maker according to the manufacturer’s instructions.

La Graineterie du Marché (A favorite épicerie, with a good selection of honey, in Paris)