I’m Not Complaining. But…

Each spring, as the temperature starts to gently climb in Paris day-by-day, most normal people spend their time figuring out how to maximize their time outdoors basking in the gloriously warm Parisian air.

Around here, though, spring means only one thing: Eat all the chocolate I’ve got on hand because my apartment turns into the world’s largest bain marie, a sizzling oven capable of melting the thickest, darkest, and densest of chocolate bars from ’round the globe. 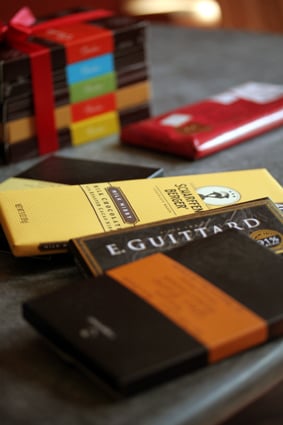 When I travel and come across an interesting tablet of chocolate, I always pick it up and take it home, hopeful that I’ll invite some friends over for a tasting. And my stash grows and grows throughout the year. But come April or May when I’m finally able to fling my wood-shuttered windows wide open and let the fresh air in, the bittersweet backlog gets to be too much and I realize that I need to eat all my chocolate now—and as quickly as possible.

So I spent the last couple of months, pre-Speedo season mind you, wolfing down lots and lots of unusual and curious chocolate bars.

This year, I think I set a record and was successful at finishing all the best-quality bars by late May and was down to just a couple of strays, which were mostly commercial chocolates gifted to me by well-meaning folks. But there’s not much to look forward to when the label boasts it was made under the Kraft umbrella of fine products, so they sometimes get melted down for a batch of brownies or chocolate ice cream. So far, no complaints.

Yet this year, my plans were thwarted. Not that I’m complaining or anything.

One issue was that the weather this summer in Paris has been mostly crappy; cool and frequently drizzling. Not that I’m complaining; I’d much rather have that than the 104 degree temperatures of summers past.

The other issue I had to contend with was my trip back to the US in June. Once again, I’m not complaining, mind you, but everywhere I went I was loaded up with chocolate bars. And not just one or two nice bars of chocolate, but stacks and stacks of them, which all looked incredible. I think I returned to Paris with at least thirty very interesting bars of various origins, percentages, and flavors.

And I mean really; how does one say no? I didn’t want to be rude.

So I’ve been working my way through them, rather quickly in fact, in anticipation that the broil of summer is probably just around le bend. 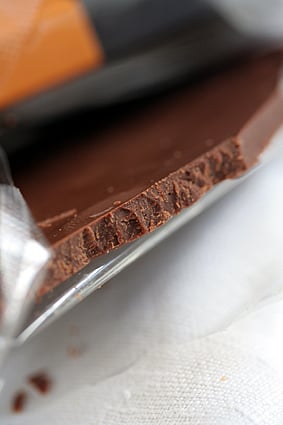 This tender and salty bar was a gift from Adam at Fog City News, a newsstand and chocolate shop which has the most astounding collection of fine chocolate bars in one place that I’ve ever seen. Heck, if they’d set up a cot for me in the corner, I’d gladly work my way through them all, with a stack of men’s fashion magazines by my side and dreams of six-pack abs like all the models within. Fat chance of that happening. But if I can dream about living in a chocolate shop, I can dream of totally-fabulous abs, can’t I?

Uba Budo was the name of the bar, from Coppeneur in Germany. It was made of dark forestero milk chocolate from São Tomé, 52% in case you’re a numbers-queen. But what made it startlingly good was the minerally taste of Himalayan pink salt, which played off perfectly against the smoothness of the milky caramel. The milk chocolate was creamy, not sweet or gunky. And although I’m not a big milk chocolate fan, this bar convinced me to step away from the dark side and lighten up a bit.

I have lots of bars now in my stash, that’s been refreshed to the max, which includes a milk chocolate bar from ScharffenBerger with sea salted almonds, a seriously-dark 95% bar from E. Guittard, every bar that Theo blends (I easily sailed through the two enormous boxes of filled chocolates they sent me home with with no problem…whatsoever), as well as a hefty (and heavy…I carried all these tablets on board with me) stack from Charles Chocolate loaded with everything from caramelized puffed rice to little bits of tangy candied orange peel and roasted hazelnuts.

The next bar in my chocolate queue is another tablet from Coppeneur with banana and ginger, which is sitting in my chocolate batter’s-box. But I need to start plowing my way through all these bars…quick!… before the weather decides to be less-accommodating to Paris’ most prolific and multi-national chocolate collector.

So as I make my way through the bars, happy that the first one was a home run, I’m curious to go on to the next.

Not that I’m complaining.