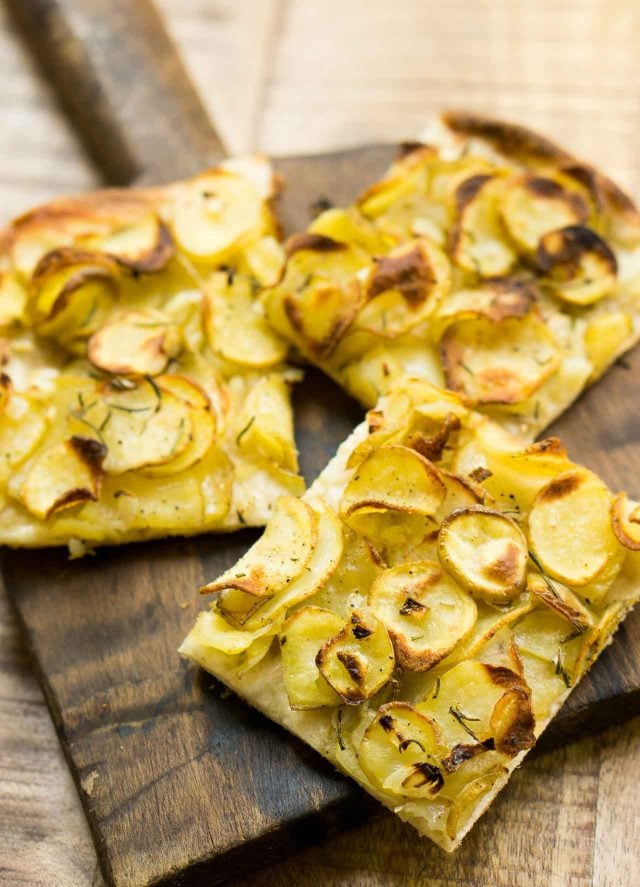 Potato pizza sounds a bit odd, until you try it. The first time I had it was in Rome at Pizzarium, which I still remember almost fifteen years later. My memory isn’t what it used to be (as people insist on pointing out…), but I think I also had it at the Forno Campo de Fiori as well, and couldn’t get enough of it. I wondered what took me so long to discover this great topping for pizza, and why wasn’t it more well known? 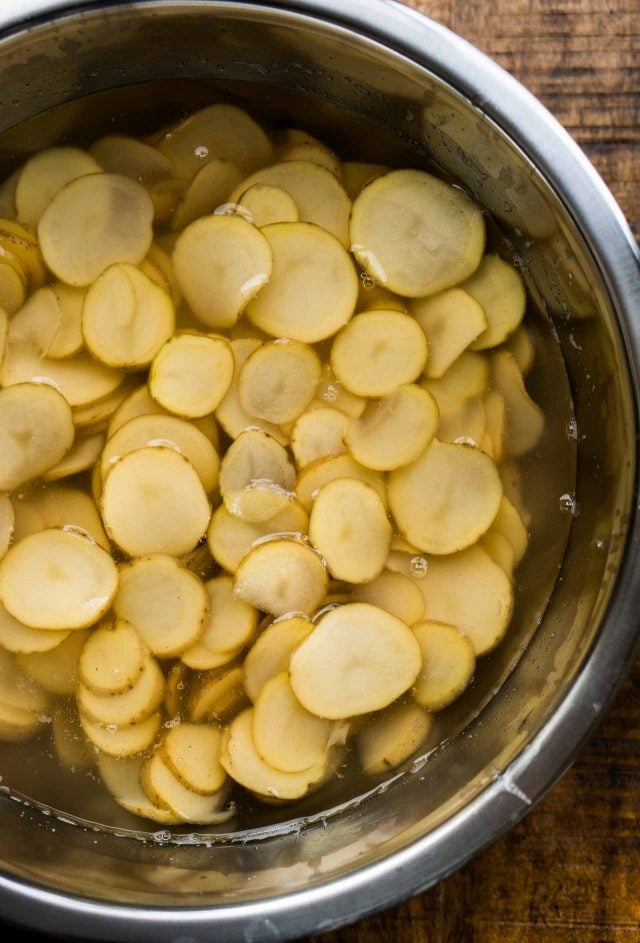 A couple of years back, the no-knead bread sensation swept across the planet, or at least across the internet. I first heard about breads that don’t require kneading in No Need to Knead by Suzanne Dunaway, then by Jim Lahey in his book My Bread. Before those two, Charles Van Over surprised the baking world with bread that could be made in the food processor in The Best Bread Ever, which won both a James Beard award and the IACP Julie Child award. And Zoë François is doing the same, with holiday breads and more.

What all this means is that one of the obstacles have been removed from making bread, as well as pizza, at home. So it’s easy to give it a go, which I did. 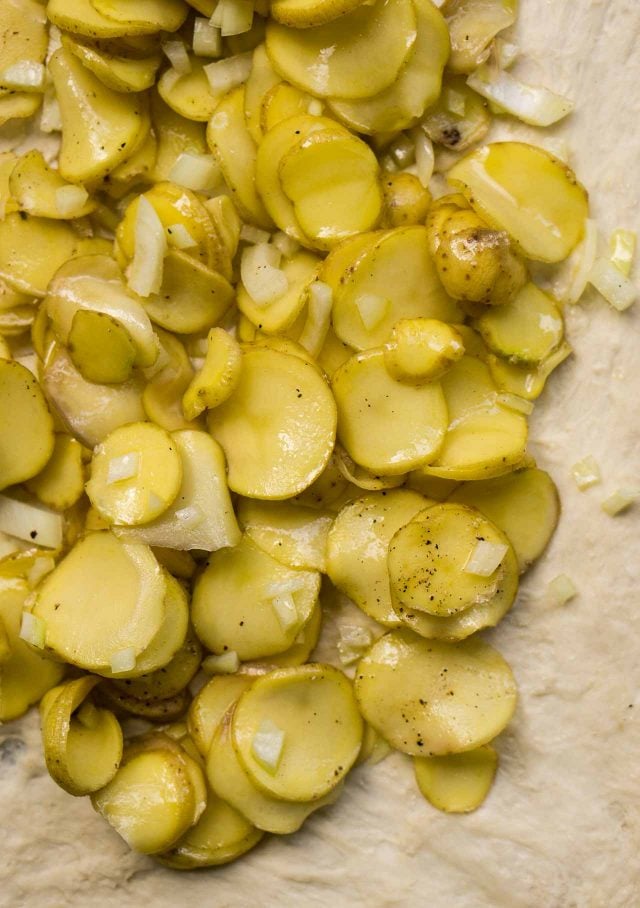 If you’ve ever had a Neapolitan pizza, you know that pizza doesn’t have to have an extra-crispy crust. I thought that a potato pizza would benefit from one, and used a baking steel, which works great for free-form pizzas and flatbreads, but I found it made the bottom of my first one way too crispy. (Which is probably why the recipe didn’t say to use one.)

So we don’t always need to go to find the “ultimate” whatever when you’re baking, and I tried it a second time without the steel, and recommend that you skip the steel or pizza stone on this one. 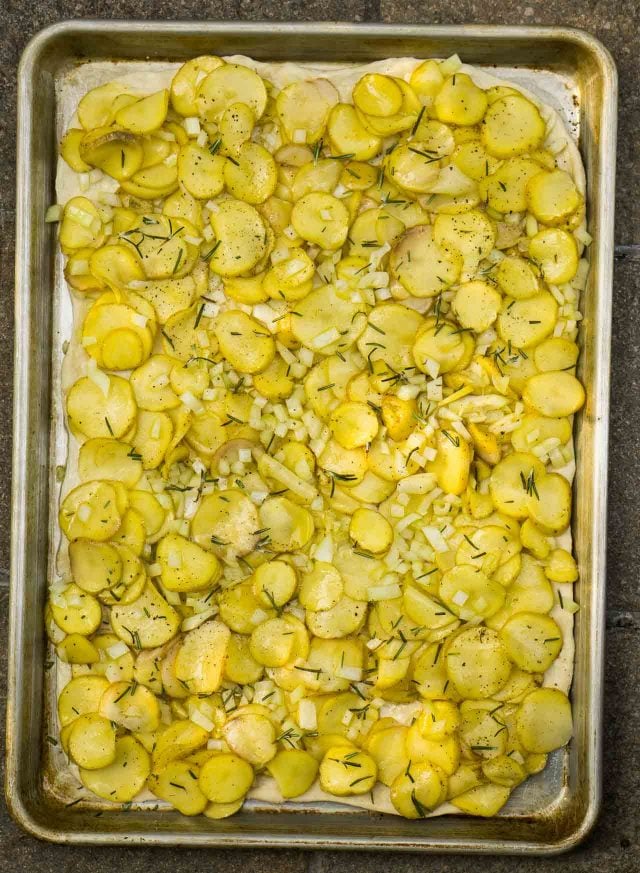 I didn’t follow the instructions again (oops!) and didn’t peel the potatoes. The slices are so thin, however, I didn’t think it necessary. Yukon Golds are recommended, but if you live somewhere where they aren’t available, a small, golden-yellow, firm, and good-tasting potato will work. In France, pommes de terre grenailles fit that bill, and I’ve used the interestingly-named Monalisa potatoes in place of Yukon Golds. You can peel them, or not. 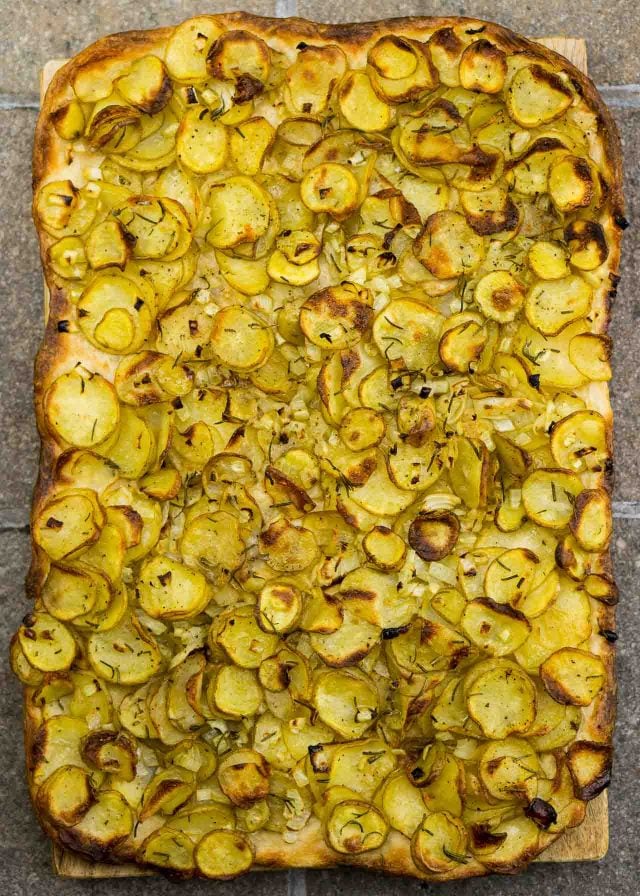 I also don’t have a mandoline. A departing friend gave one to me when she moved from Paris, which I used a couple of time, before giving it away. But if you were smart enough to hold onto one, wondering if you’d ever use it after the first few times that you did (before you banished it to the back of a kitchen cabinet), now is the time to unearth it. If your food processor has a very thin slicing disk, you could use that as well.

As for me, I used a regular chef’s knife and cut the potatoes as thinly as I could. Even if you use Monalisa potatoes, you’re not creating a work of art. You’re making a pizza. So don’t worry too much about potato perfection. 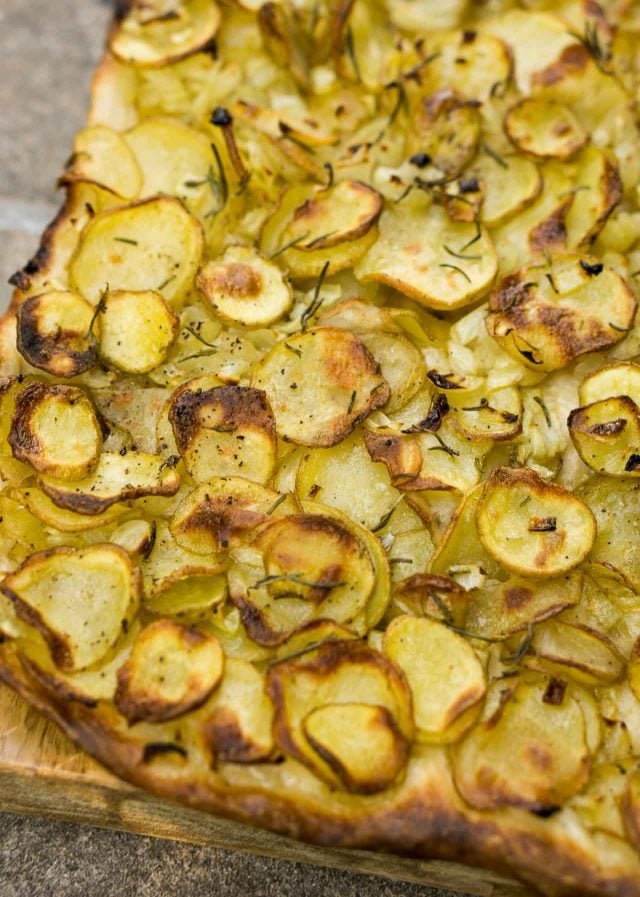 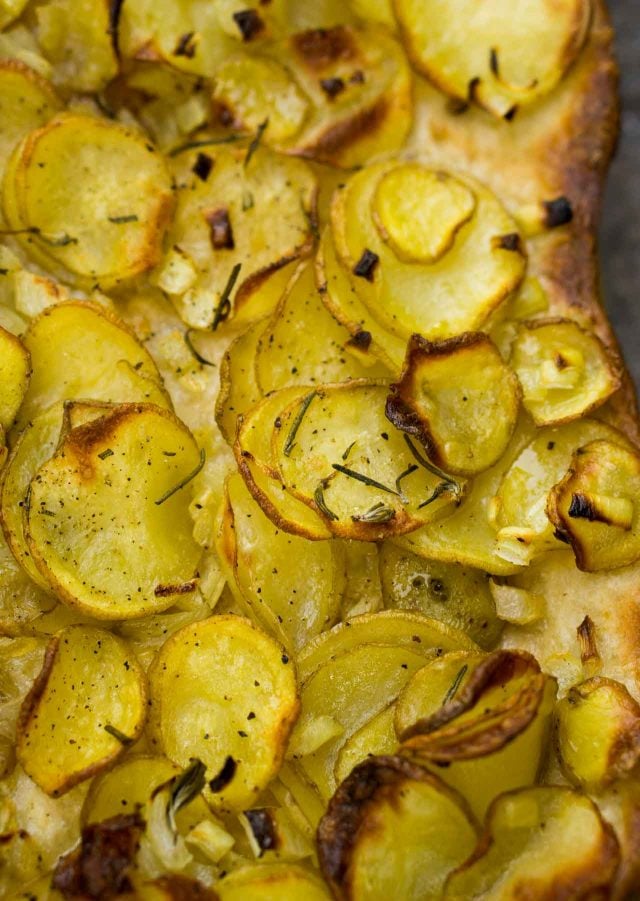 I ended up with one generous pizza, large enough for dinner, with leftovers, although this type of pizza is best when freshly made. It’s a fun pizza to try and different from the usual tomato sauce+mozzarella slices…and there’s nothing wrong with them, but this potato-topped pizza fills the bill (and my appetite for pizza) another way. 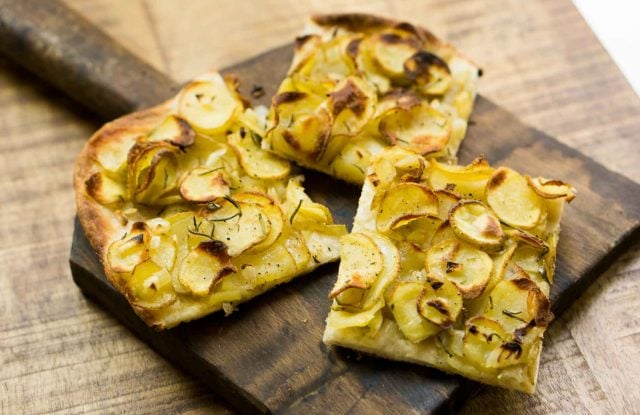 Adapted from My Bread: The Revolutionary No-Work, No-Knead Method by Jim Lahey with Rick Flaste I didn't try this with all-purpose flour but King Arthur Flour company did a comparison between the two in baking projects, and their answer is "Yes...in a pinch." Frankly, the dough is so easy that you'll probably be making other pizzas with this dough, so it's worth getting a bag of bread flour. (It's called farine à pain, in France, or you can use T65 flour and add a teaspoon of vital wheat gluten per cup/140g, which you can find in natural food stores.) I did try baking this on a pizza steel which is amazing for baking regular free-form round pizzas directly on it, but here, you don't necessarily want a very crisp cracker-like crust, so I found I preferred it baked not on a baking steel. It could be fun to try this with adding crumbled blue cheese (maybe) midway during baking, or even diced bacon. If you do, let us know in the comments how they work out. You'll note that I gave the dough recipe in weights, which is easier to multiply if you decide to make enough dough for two pizzas. According to Jim Lahey, the dough can be stored overnight in the refrigerator in a lightly oiled freezer bag, or frozen for up to 1 month. So you can make a double batch of the dough at the same time, and save one for later if you wish.
Servings 8 slices

For the no-knead crust 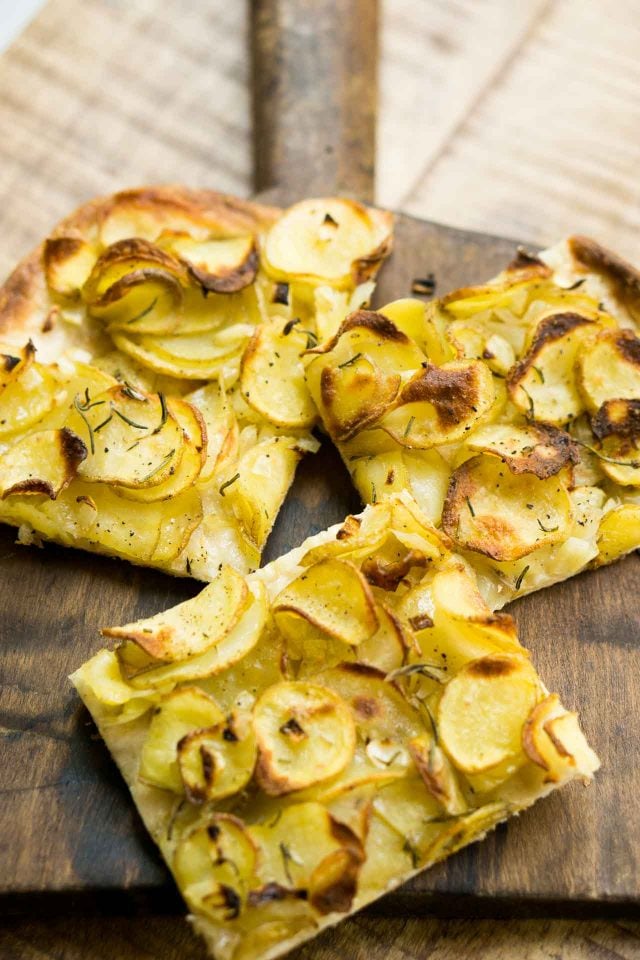