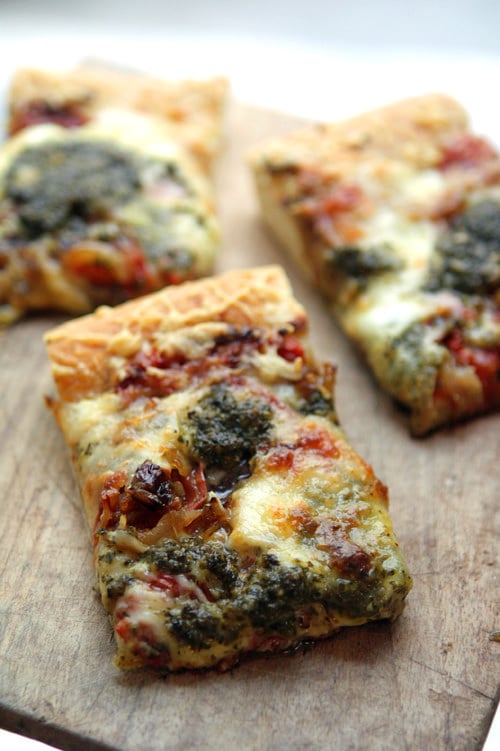 Because I worked as a baker for a good portion of my life, for some reason, people mistakenly get it into their heads that I worked early morning hours. But anyone that has spent any time with me in the morning knows I am one to be feared if forced to interact with others before noon. When I worked in the restaurant, my shifts actually began in mid-afternoon, and I would get home around 2am. Which to me, were my kinda hours. 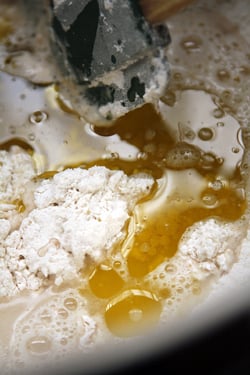 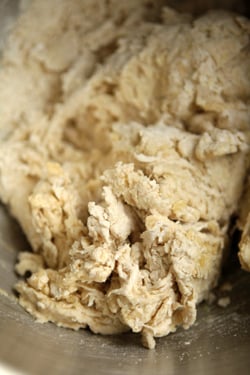 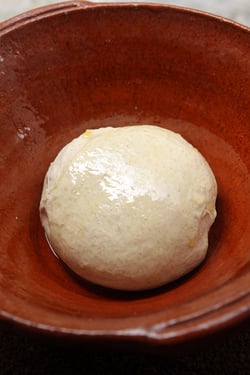 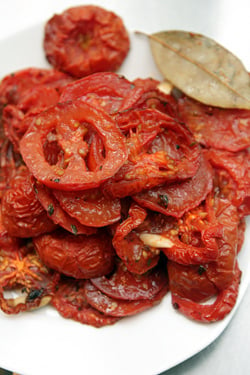 However every once in a while, I would do my penance and be assigned to work the dreaded morning shift, which started at the challenging hour of 8am. Which meant I had to get up a lot earlier to make it to work on time. The regular kitchen staff got there at 6am, and by the time I arrived, they were all coffee’d up and in full-on work mode. And believe it or not, some of them were kind of cheery. 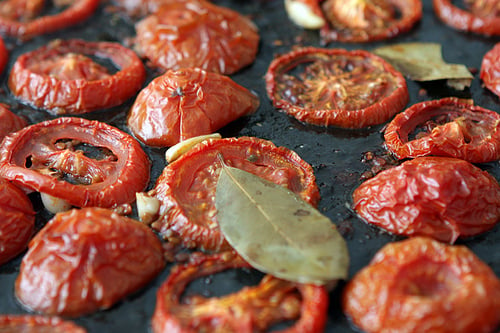 In spite of having to occasionally work with Mr. Grumpy, the morning prep crew are truly the unsung heroes of professional kitchens, and they get there early to do things like chop onions, make sauces, take produce and meat deliveries, and survey and make sure anything left over from the previous evening gets dealt with. I liked working with those folks because they were not typical line cooks, with line cook mentalities, but were people either who had families and wanted to be home at night, or people who were starting out as cooks and were being trained. And perhaps a few of them were the dreaded “morning people” and just wanted to work in the morning.

After I had several coffees and after several hours of the staff avoiding the cranky dude filling tart shells, churning ice cream, and whipping up cake batters, avoiding contact with anyone, I became “normal.” 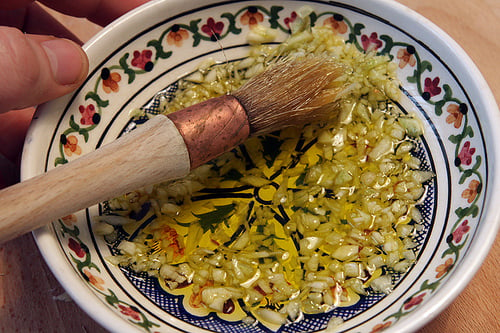 Right before lunch service, there was usually time for a quick staff meal. Because these people worked so hard, it was usually a sandwich made hastily for last night’s leftovers, or something reheated. For some reason, I got it into my head that I would make pizza for staff meal. Perhaps to redeem myself for my earlier behavior? 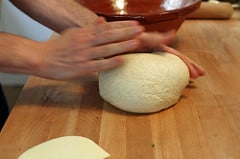 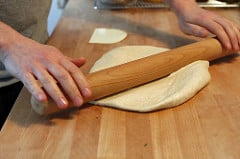 Chez Panisse was, of course, known for its thin-crusted, wood-fired pizzas, which people referred to (and misnamed) as “gourmet pizza” at the time, since many Americans just knew sheet-pan pizza, or pizza as large, round, cheesy pies. 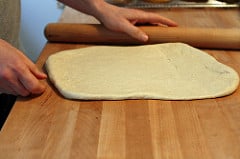 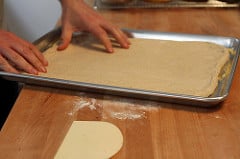 Because I manned big pastry ovens, and didn’t have the time (or skill) to make the beautiful pizzas they were making upstairs in the wood-fired oven, I would grab a generous boule of pizza dough they were mixing up, and make a giant sheet pan pizza, which, for lack of a better term, I’d call party-pan pizza. Secret: Restaurants workers like to eat the opposite of the food they’re preparing all day. And sheet pan pizza seemed to fit the bill. 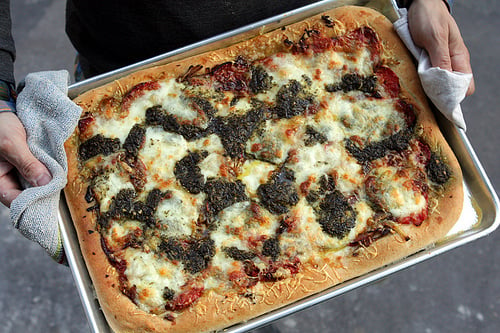 Am not sure why I named it “party” pizza, at the time, but you can take that as license to top it with whatever you want. Oven-roasted tomatoes, grated cheese, olives, spicy chorizo sausage, and ham can be used. Sautéed mushrooms, roasted eggplant, capers, stewed onions, pesto or torn basil leaves, and sautéed greens are other possible guests to invite to your own pizza, to make it a party. 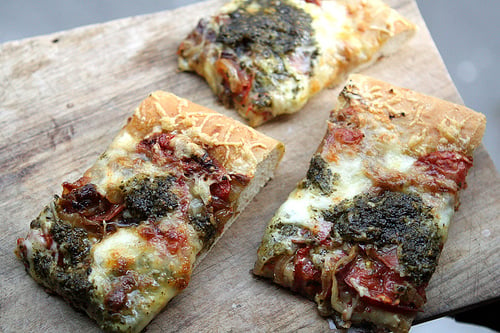 Dough adapted from The Art of Simple Food by Alice Waters This kind of pizza is perfect to make for folks that shy away from pizza, thinking that it’s fussy or the dough is hard to deal with. In fact, nothing could be easier and it really just takes about five to ten minutes of work. And you don’t have to worry about shaping it in perfect rounds. One of the secrets of working with yeasted dough is that soon after you start rolling and pulling it, it’ll become more resistant and “fight” back a bit. Instead of struggling with it, let it sit for five minutes to relax, then go back and work with it. You’ll find it a lot easier to handle. If you want to make more traditional pizzas with this dough, just divide it in two. For the pizza shown, I used 2 pounds (1kg) tomatoes, oven-roasted, 2 sautéed onions, 6 slices of country-style ham (jambon de Bayonne), a few slices of chorizo, 1/2 cup pesto, 6 ounces (180g) grated Comté cheese, and 8 ounces (240g) fresh mozzarella.
Garlic Oil
1/4 cup (60ml) olive oil
2 cloves garlic, peeled and minced
Pizza Dough
2 teaspoons dry yeast
1/2 cup (125ml) tepid water
pinch of sugar
3 cups (400g) plus 1/4 cup (35g) all-purpose flour
1/4 cup (35g) whole wheat or rye flour
1 teaspoon salt
1/4 cup (60ml) olive oil
3/4 cup (180ml) cold water
1. Mix the olive oil and garlic together and set aside for a few hours.
2. To make the dough, make the starter by mixing the yeast, 1/2 cup water and sugar in the bowl of a stand mixer. (If making the dough by hand, mix them in a large bowl.) Stir in the 1/4 cup of flour and whole wheat flour, and let stand 30 minutes undisturbed, until foamy.
3. Mix in the salt, the 3 cups flour, then the olive oil and 3/4 cup water. Knead for five minutes with the dough hook attachment, or by hand, until a smooth, but slightly sticky ball of dough is formed. If it seems too wet, knead a bit more flour into it, if necessary.
4. Oil a large bowl and put the ball of dough into the bowl, then flip it over, so the oiled side it up. Then cover the bowl with plastic wrap or a kitchen towel and let sit in a warm place until doubled in size, 1 1/2 to 2 hours.
(After the dough has risen, you can punch it down and refrigerate it for a few hours, or overnight. Let come to room temperature before continuing.)
5. Preheat the oven to 500ºF (260ºC) or as high as possible.
6. Sprinkle cornmeal over an 11 x 17-inch (28 x 43cm) baking sheet, or line it with parchment paper. Roll the dough on a lightly floured countertop to approximately the size of the baking sheet. If the dough pulls back, let it rest a few minutes before continuing. Then lift the dough and stretch it out, then place the dough on the baking sheet, fitting it to the edges of the pan.
7. Brush a 1-inch (3cm) swath of just the garlic oil (without pieces of garlic in it) around the rim of the pizza dough, then smear the garlic and the rest of the oil over the rest of the interior surface of the dough.
8. Top the pizza with whatever toppings you wish (see post or suggestions in headnote.)
9. Cook 15 to 20 minutes, until the bottom is cooked and the top is golden brown.

Depending on your oven, you may need to monkey around a bit with figuring out which rack to bake it one. Usually I start mine on the lower rack, to get the bottom cooked, then move it to an upper rack to brown the top. Of course, if you have a pizza stone, use that under the baking pan for a crisper bottom crust. 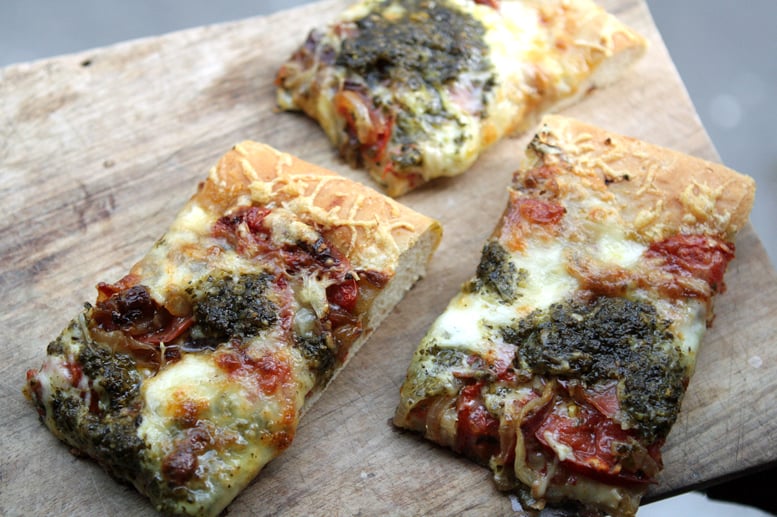