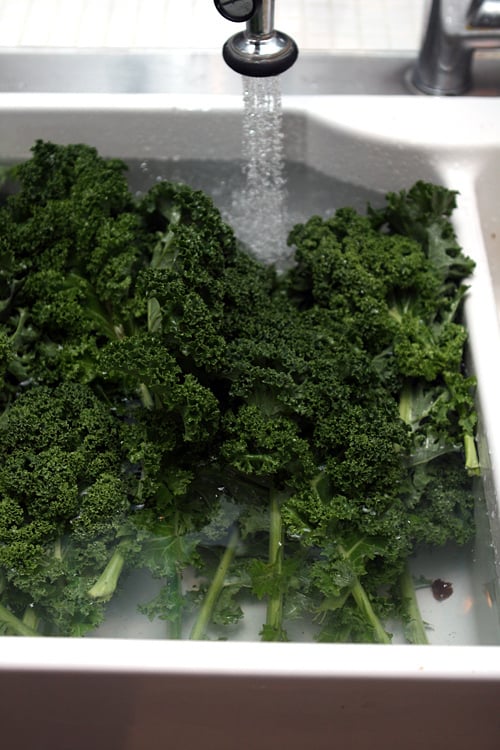 The word “non” is often the response of choice in France. And while it makes for funny snickering from outsiders, chuckling at complicated and arcane bureaucracy, it’s become a serious hindrance to innovation and small businesses, which have been having a particularly tough time lately. And there’s a younger generation of entrepreneurial talent, who have new ideas and are striving to be innovative and inventive, who want to succeed in their home country. 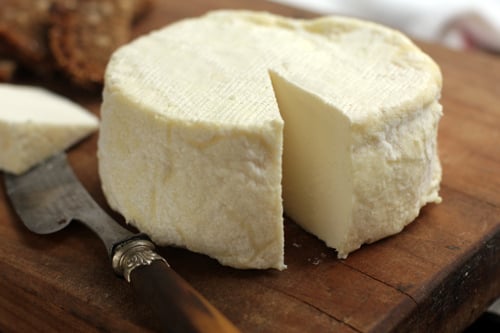 The group, Les Pigeons was recently founded by French web entrepreneurs, who felt used by politicians by increasing their taxes, who call themselves “pigeons” – which has been translated as “chumps“, a reference to the difficulties they’re having, feeling like they’re being taken for granted.

France has some of the most beautiful, delicious food in the world. There are outstanding raw milk cheeses, superb produce grown by petits producteurs, eggs with yolks so orange, they look like fresh-squeezed orange juice, and dairy products that taste like the actual milk and cream used to make them, not of stabilizers, gums, and additives. For every scrape with a bloated bureaucracy, there’s a bakery in Paris with the warm smell of butter and fresh yeast wafting bakery just around the corner from wherever you’re standing. Saying “Well, that’s just the way it’s always been” or “That’s France for you!” doesn’t solve any problems. And while it’s natural to have some good with the bad, I want everyone to succeed and thrive everywhere, including in France. 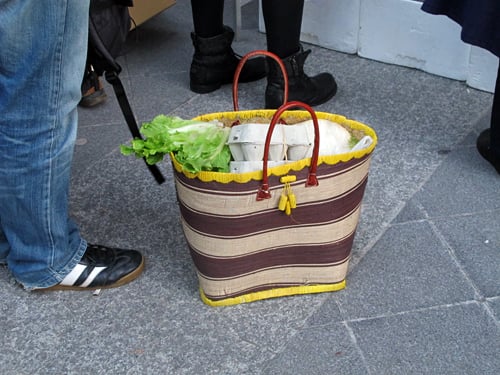 Folks have moved farther from the land when shopping, and buying local has become increasingly difficult in Paris as the farmlands surrounding the city have been taken over by housing and large-scale agricultural and commercial centers. And fewer people (especially young ones) want to go into farming for a variety of reasons, making it harder to get your hands on foods produced regionally. 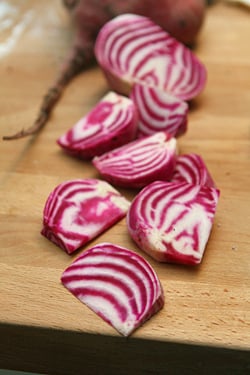 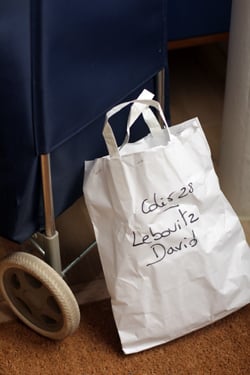 So an organization was formed in 2011, La Ruche qui dit Oui! to help local farmers get their produce, meats, and dairy products, directly to the people. For a while, I got a CSA box from an organization designed to support regional farmers. But each week – even in the summer – I was having a hard time getting enthusiastic about my box containing a head of lettuce, four potatoes, cabbage, and maybe some beets and onions. I wanted something “sexier” as the French would say, and I wanted to choose what I got.

Enter La Ruche Qui Dit Oui! Scattered throughout France, with many clusters in Paris, one subscribes to a ruche in their neighborhood. They likely aren’t the boon they are to people who live in the countryside, that often have access to local and regional foodstuffs, but here in Paris, there are eleven ruches already going forward, and six more scheduled to open soon. 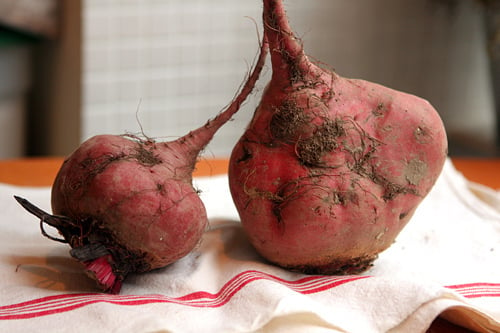 One concept that is part of French culture is collectivité, which is often expressed in the famous strikes and social services. We do have that spirit in America, with our system of public schools, libraries, postal services, and so forth, but it is more of an underlying thread that passes through French life; public institutions and systems are meant to help everyone and provide for the greater good. 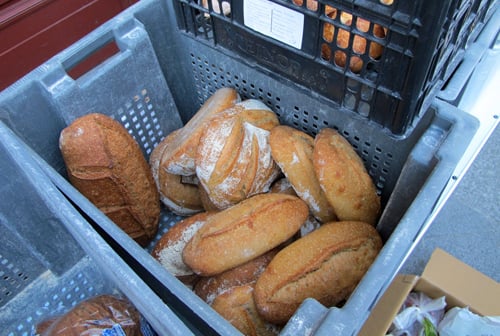 Of course, that’s been diminished in recent years with globalized agriculture and getting used to seeing haricots vertes, asparagus, and cello-wrapped strawberries all year round. So it’s nice to see an organization working to re-connect people with the farmers and food producers, who have historically been the backbone of France, and give them a way to bring their food directly to a hungry public. 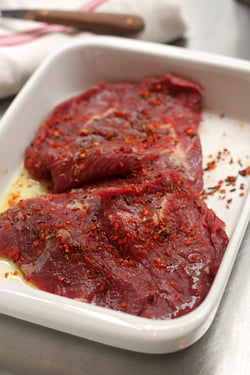 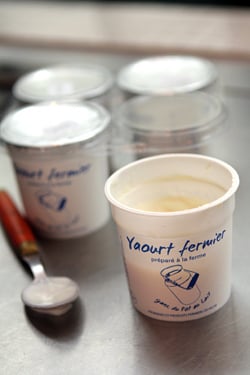 The concept works like this: You pick a ruche (beehive) close to where you live and simply subscribe to it. Then, before the next pick-up date, which in my case is every two weeks, you’re sent a link to the website (which works really well) that lists what products will be available at your ruche, with prices, photos, and descriptions. 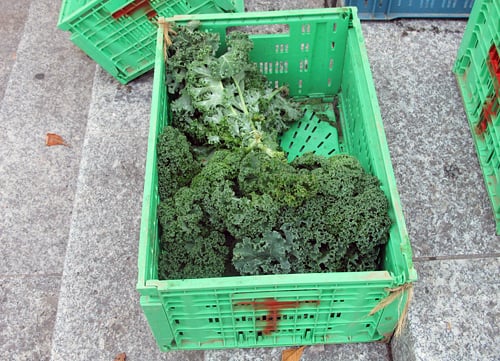 Prices are sometimes better than supermarkets and outdoor markets because you’re buying directly from the producers, not from middlemen. A bunch of radishes was €1,30, a head of lettuce was the same price, and half-dozen eggs are €1,60. At a supermarket or natural foods store, you’ll pay about the same for radishes, a bit more for lettuce, and free-range eggs are at least 50% higher in price.

(Note that all prices change and vary from week-to-week, and by the farmers and producteurs. And it’s likely that items in Paris are more expensive than in the rest of the country, which is common in France.)

Four yogurts (4oz/120g) were €2,30 – about twice the price of supermarket yogurt, but they were four- or five-times better tasting. A loaf of crusty bread or a large disk of cheese are about €4, although this coming week I ordered another raw milk cheese that was only €2. The highest priced item was a pintade (guinea fowl) which was €20. (At the supermarket or outdoor market, they’re about €13.) I didn’t get one, but since it’s rare to come across beef that’s sustainably raised, I bought two steaks for €8 which is about the same price as at the butcher. (Recently my ruche offered a colis de celibataire, with a variety of beef portions for the single person.)

I’ve heard people say that eating local foods and vegetables is too expensive, or trop chers, in France. Or c’est pas possible. But these prices are similar to, or less, than I’d pay in my local supermarket. And majority of the products are organic or cultivées en agriculture raisonnée (sustainable), too.

You choose what you want from a list sent to you via their website. (And I know I already mentioned it, but for those of you who have struggled with websites here – the site works great!) Then you add whatever items you want to a shopping cart and pay in advance for it. The day before pick-up, you’re sent a list of your achats, which you print out. Then you go to your local ruche and get it. Your local ruche may be a restaurant, café, or a public space. 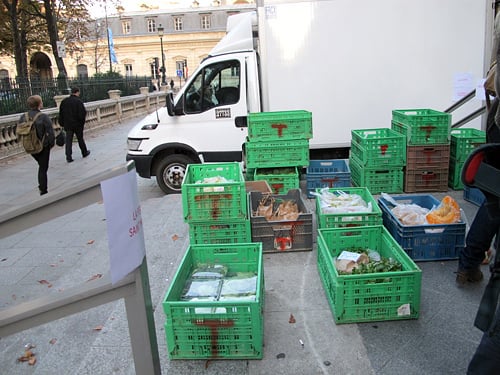 At the pick-up spot, you stop at each person or stand that you’ve ordered from to pick up your purchases. It’s a bit of slow-going, as you need to make your way around to get everything. But on the plus side, you meet the people who actually produce the cheeses, who raise the meat, the folks who cultivate the honey, the bread makers, as well as the farmers who grow the lovely vegetables.

My first visit, I got carried away and bought too much kale, thinking I might never, ever see it again. Since it was the first thing I picked up, I was shocked when the farmer handed me two giant bunch of the leaves, so big that they filled up three-quarters of my wheeled shopping caddy. 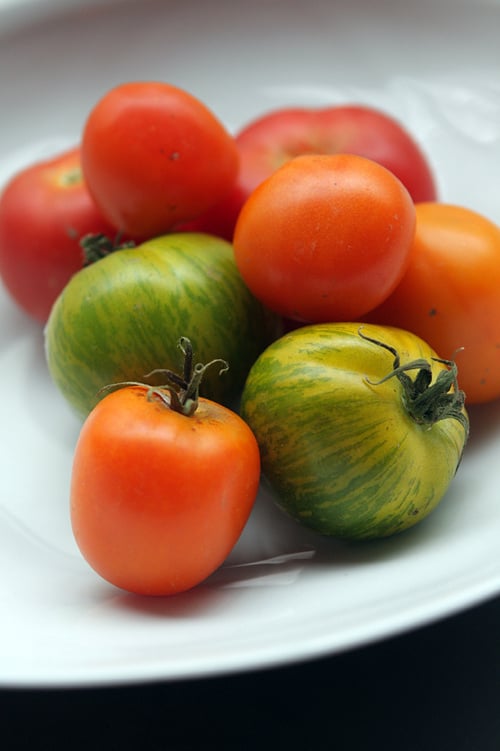 And I got some of the best (and only) good tomatoes that I’ve seen in Paris. Unfortunately when I got home, I found that two of them were past their prime. But considering the sad-quality of tomatoes in supermarkets and at the markets, I was happy to be able to have a nice sack of real, honest-to-goodness, farm-grown tomatoes to make a salad with, which went with the beef I bought. (A friend who has a restaurant gave me a contraband piece of horseradish, which I made a zippy horseradish cream sauce out of by grating it into some of the crème fraîche.) The beets were a bit large – I was expecting the tinier, younger Chioggia beets I was familiar with back in California, although they were great cut in wedges and roasted with other root vegetables I had on hand. And I’ve been enjoying the excellent milk every morning in my café au lait, although it doesn’t last the weeks and weeks that milk from the supermarket does.

I’ve also been enjoying the very fresh eggs and wish I had gotten more. In the end, I wheeled away my overloaded caddy, having spent about €35. And that’s about what I spend at the outdoor market where I shop, where most products aren’t local or sold by the folks who grow them themselves. The only thing I didn’t bring home were the radishes since the farmer got stuck in the infamous rush hour Paris traffic and I didn’t have time to wait. 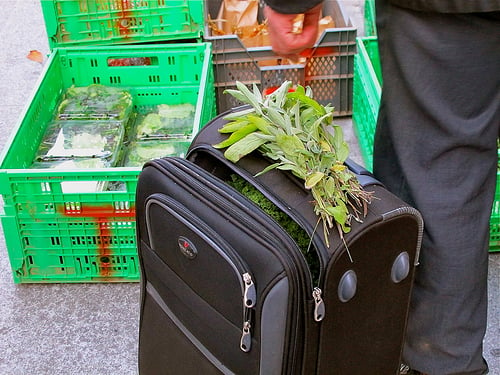 So like the clusters of Parisians – and other folks across France – that are showing up to support local farmers and producers, and enjoying a wonderful selection of vegetables, meats, cheeses, and even pasta made from organic wheat, grown just outside of Paris, I’m saying “Oui” to the ruche.

Shopping for Local Produce in Paris