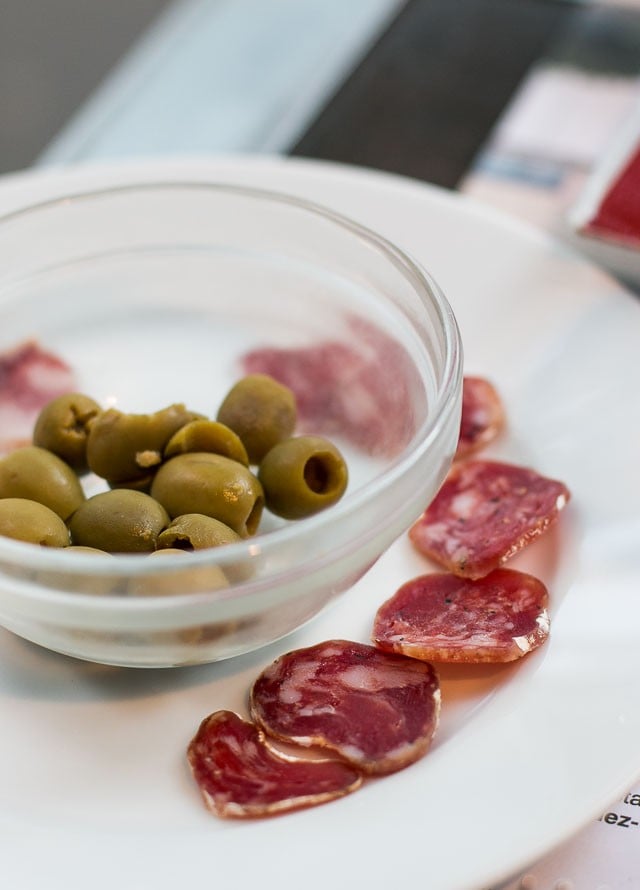 I was walking down the Quai de l’Hôtel de Ville on a recent warm summer night and passed by the outdoor tables of Le Trumilou. I like eating outside on a terrace in Paris but when they implemented the non fumeur law in France for restaurants cafés, the smokers went outside. It was kind of vexing because it was so nice that everyone could go outside and enjoy the fresh air. But now the air was so smoky that if you don’t want to smell that while you are eating, you have to go inside. I think it’s time for separate areas, or to limit people to two cigarettes per meal, like the airlines do with drinks? A restaurant I worked at in California back in the day had a smoking section and even the waiters who smoked didn’t want to wait on those tables because people smoked so heavily. 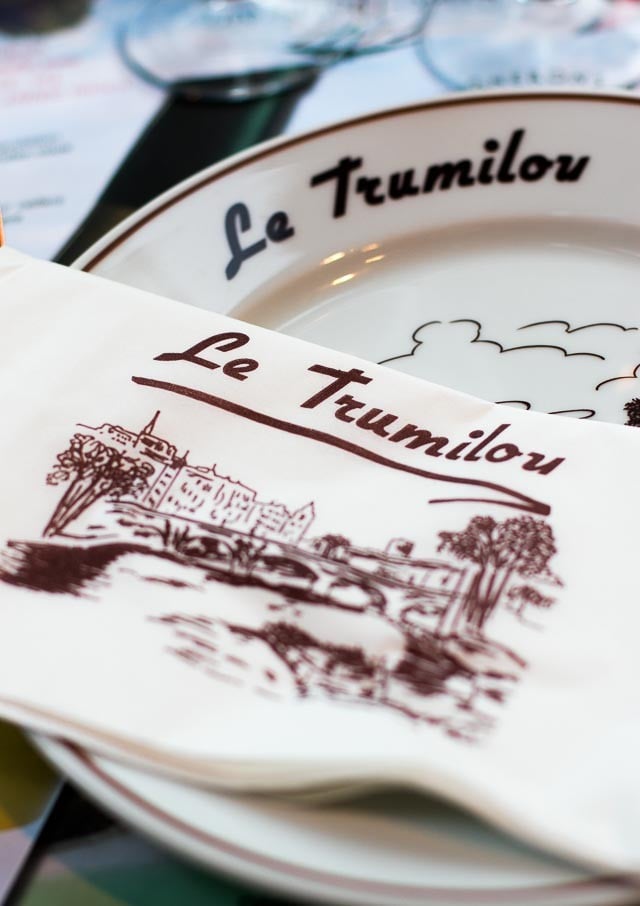 If people want to smoke, that’s fine with me. But as someone who spent most of his life cooking in restaurants, surrounded by very good cooks, I can’t recall any of the good ones smoking. The worst thing to me is to walk by a restaurant and see the cooks standing outside, puffing on cigarettes. How can they taste the food? (I worked for a chef that wouldn’t even let us drink soda, for that reason.) A good friend who works for a French agricultural associate said that the situation will definitely change, in spite of the fact that more people – notably women and teenagers – are smoking in France than before. My apartment is surrounded by two offices and I can’t open the windows during the day, which is a shame when the weather is so accommodating. 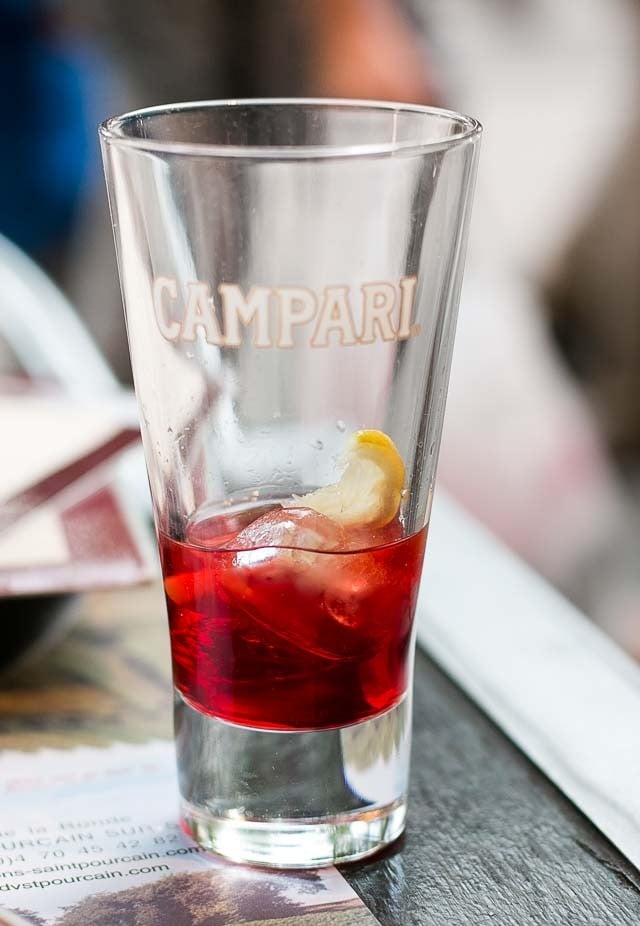 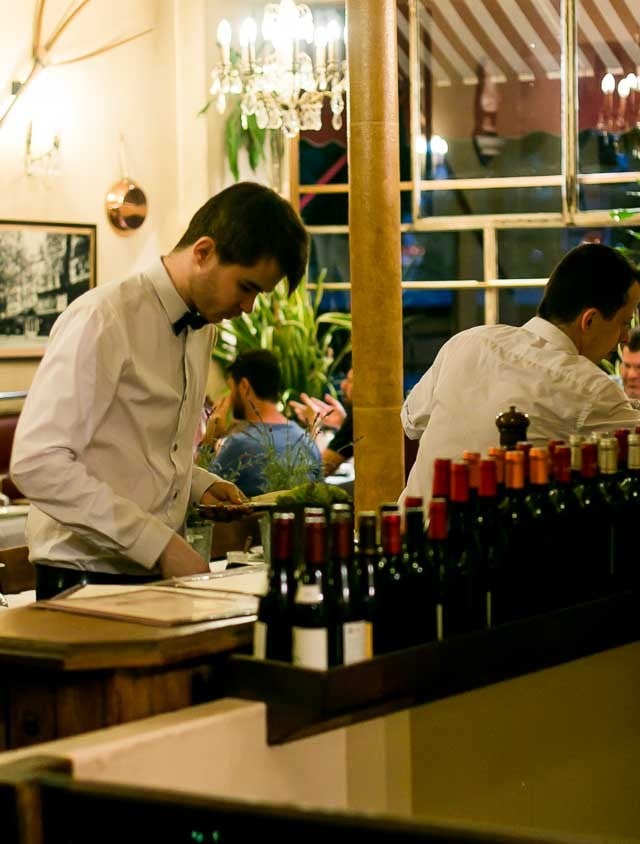 That doesn’t have a lot to do with Le Trumilou, except I didn’t notice a lot of people smoking on the terrace, which faced a busy street next to the Seine. And it seemed like it’d be a good place to spend a summer evening, as I was dying for some fresh air, eating authentic, old-fashioned French cuisine, without a lot of frills or fuss. 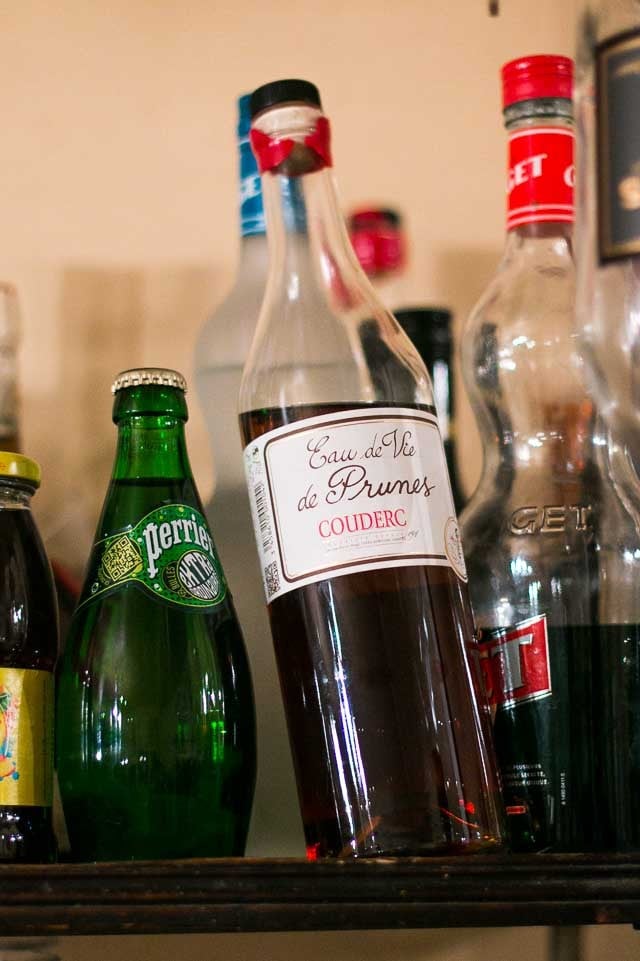 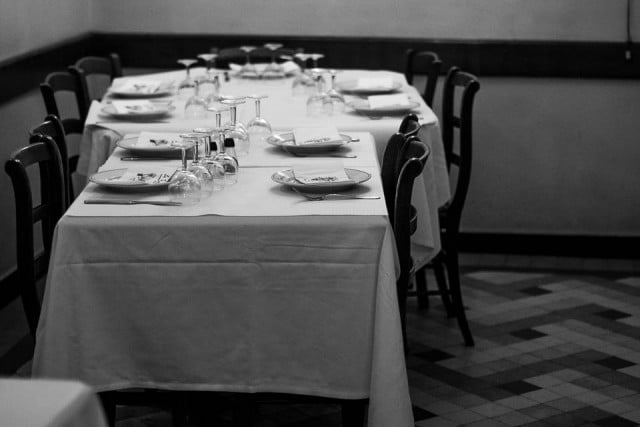 Like smoking, the French have a reputation for not working hard, which actually isn’t true, especially if you go to a bistro like Le Trumilou. The staff is well-dressed, in starched aprons and tight bow ties, and always do a good job racing around and serving the customers, whether they are locals or tourists. One waiter was even asked by a passing group of tourists to take their picture in front of the awning for the restaurant, and he happily obliged.

A few moments after we sat down, I realized that because I always walked by and didn’t stop, I wasn’t that aware of the traffic on the road in front of the restaurant (I’ve always eaten indoors) – a lively mix of cars, noisy scooters, and tour buses, not exactly quiet or tranquil. But that’s life in the big city and since it was such a nice night, we didn’t let it bother us. 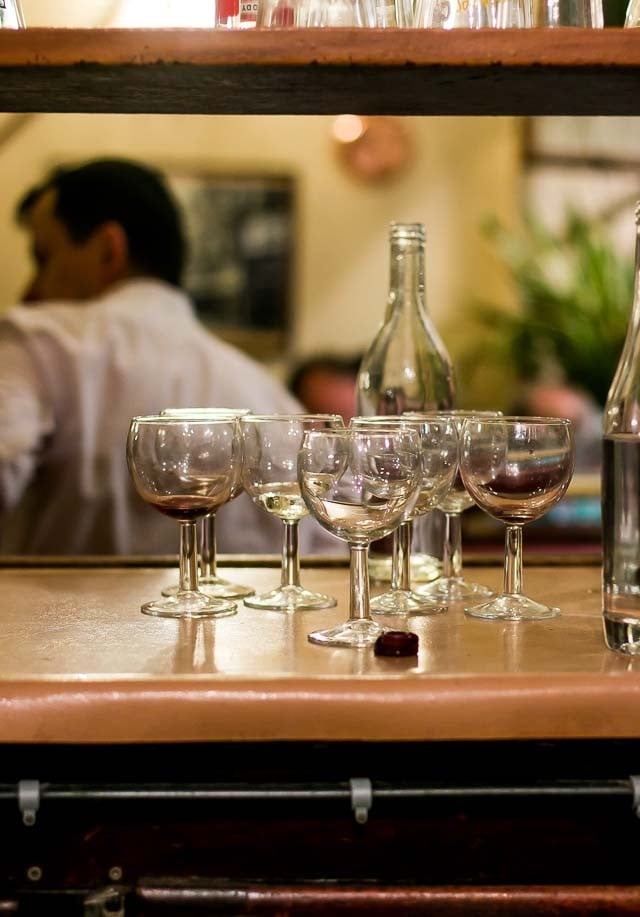 I’ve always eaten inside Le Trumilou, which to many, checks off most of the boxes for a classic Parisian bistro. The seats and tables are worn, the napkins are stiffly folded, the glasses and plates have the appropriate patina, the waiters are attentive – but not intrusive, and the welcome is genuine. 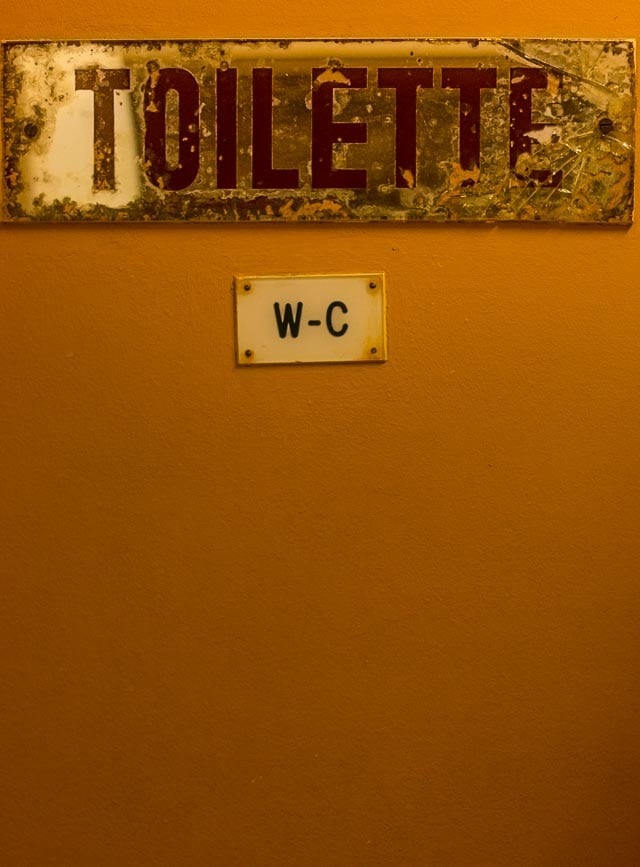 The owner, Alain, is a friendly fellow with a big grin. He works in the evening and his wife works the day shifts. He’s from the Auvergne, where people work hard and many came to Paris back in the day, and opened restaurants and cafés, continuing to work hard. When they were sold, they were usually sold to other Auvergnats.

That’s part of the history of Le Trumilou, Alain told me, and he’s part of that tradition. He also said the restaurant was originally a truck stop, which, judging from its position next to the road, is easy to understand. 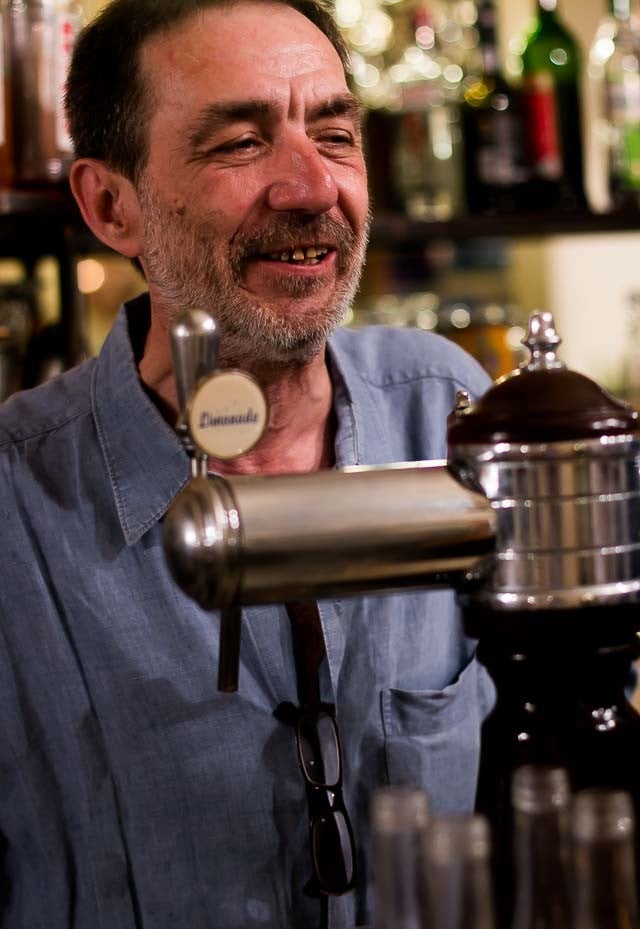 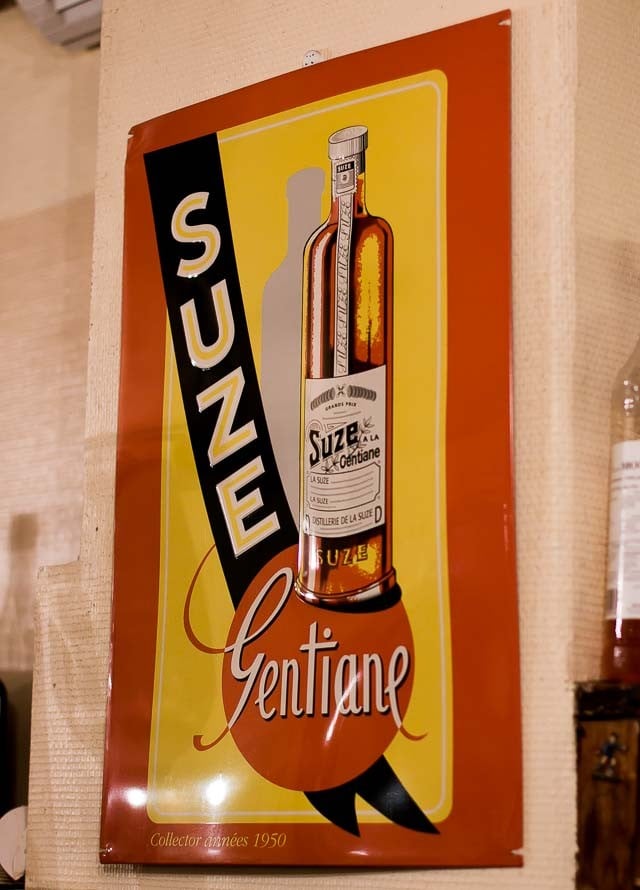 The food at Le Trumilou isn’t haute cuisine. You won’t find a lot of vegetables on the plates, the waiters are efficient (and busy), and won’t introduce themselves by name. Alain, the owner, may joke with you that the name of your reservation rhymes with “terrace,” where your partner asked to be seated when he reserved. But it’s a good stand-by place for French food, open 7 days a week, and reservations don’t need to be made weeks in advance.

You also won’t find scribbles and smears of sauce or other witticisms that need to be retired. I don’t mind some of that, but when I go out to eat, I think: 1) Will we have a good time there? and 2) How will the food be? 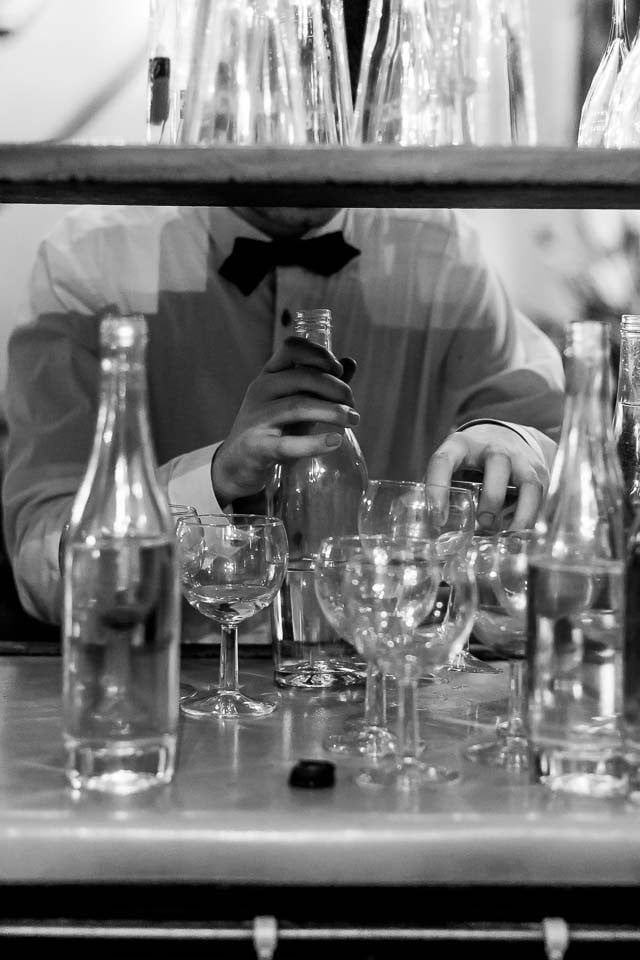 In French, the word correct refers to not necessarily good or bad, but how appropriate to the situation something should be. The food at Le Trumilou is très correct. Starters include œufs mayonnaise, salade de chèvre chaud (warm goat cheese salad), and a platter of cochonnaille, mixed pork sausage and charcuterie. 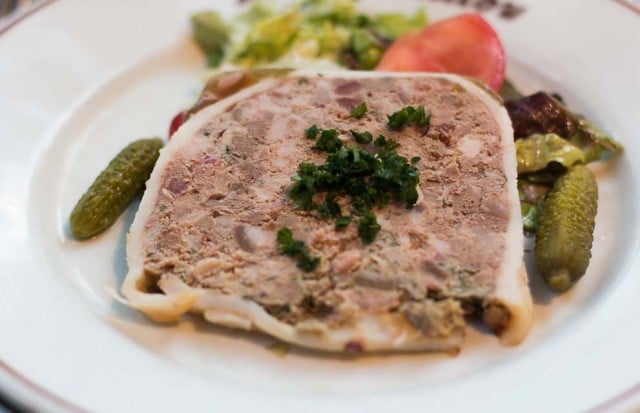 I had a glass of Campari to start as an apéritif, and the waiter brought out some dried sausage and olives to snack on. Since it was approaching the longest day of the year (and some days, lately, have felt like they would never end…) we honed on the list of rosés, which was short, but to the point. We went with the cuvée du patron (house wine) that clocked in at €19. My ice-happy Parisian partner asked for a glass of glaçons and the waiter happily obliged with the largest glass of ice cubes I’ve seen in a restaurant in Paris. So they even please the French, too. 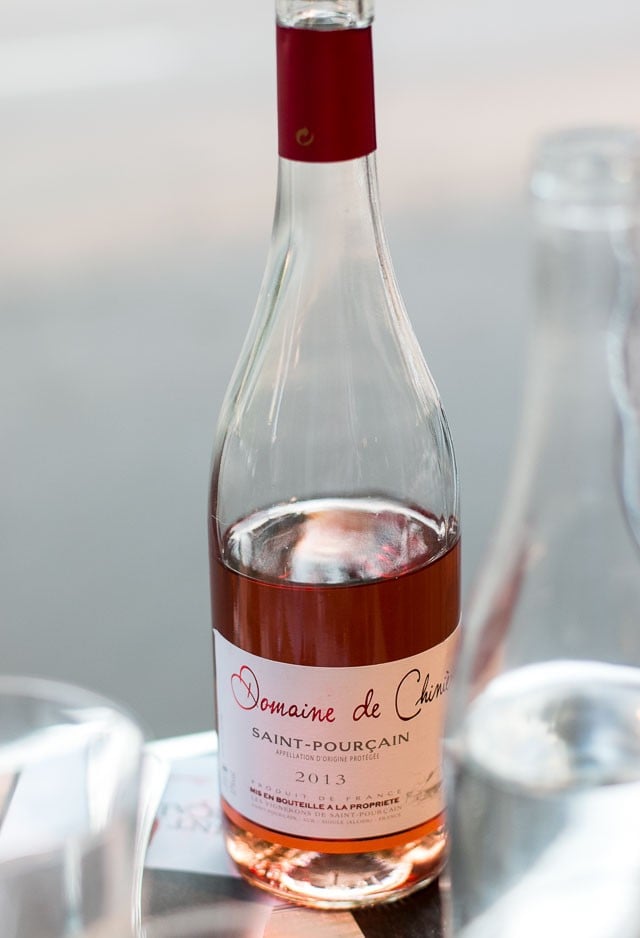 Romain ordered a salade Lyonnaise, with chunks of bacon, frisée salad, and a runny, soft-cooked egg resting on top, ready to be broken up and mixed into the salad along with the mustardy dressing pooled underneath. To me, this salad is one of life’s great pleasures. (I put a recipe for it in My Paris Kitchen because I often make them at home, just to get my fix.) 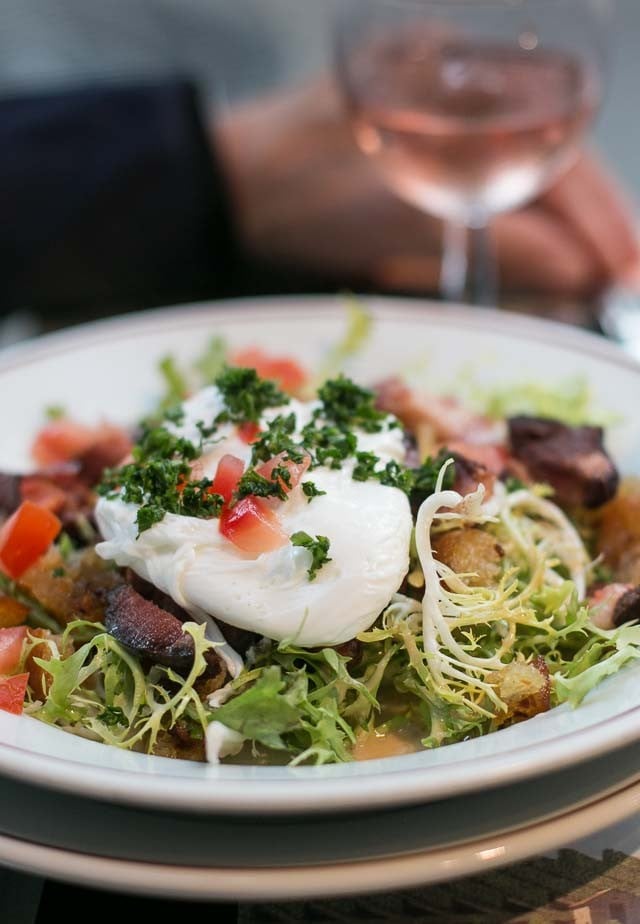 I’d ordered the €24 prix fixe menu and went with the housemade pâté wrapped in pork fat with vinegary cornichons. There are a few choices in each category, and it’s one of the better deals in Paris. And to those who say Paris is expensive, I challenge you to find a similar deal elsewhere, that includes tax and tip. 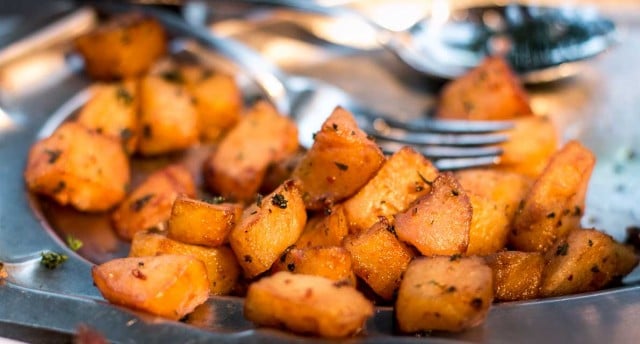 Not to dwell on clichés, but it’s hard to say that the French serve food in modest portions when faced with this enormous, crusty rack of lamb chops that came out with a bucketload of fried potatoes. 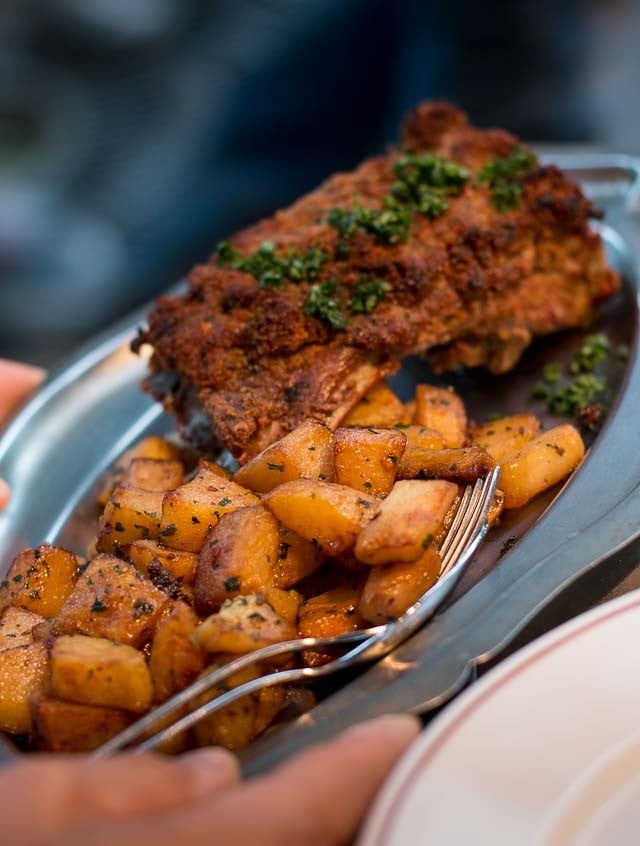 My beef Bourguignon was equally copious, richly colored on top, but tender inside when I broke into the pieces of meat. A lovely group of young American women who were attending cooking school in Paris sat at the large table next to us, a few said hi, and then got into chowing down as happily as we did on the lovely summer evening on the terrace. 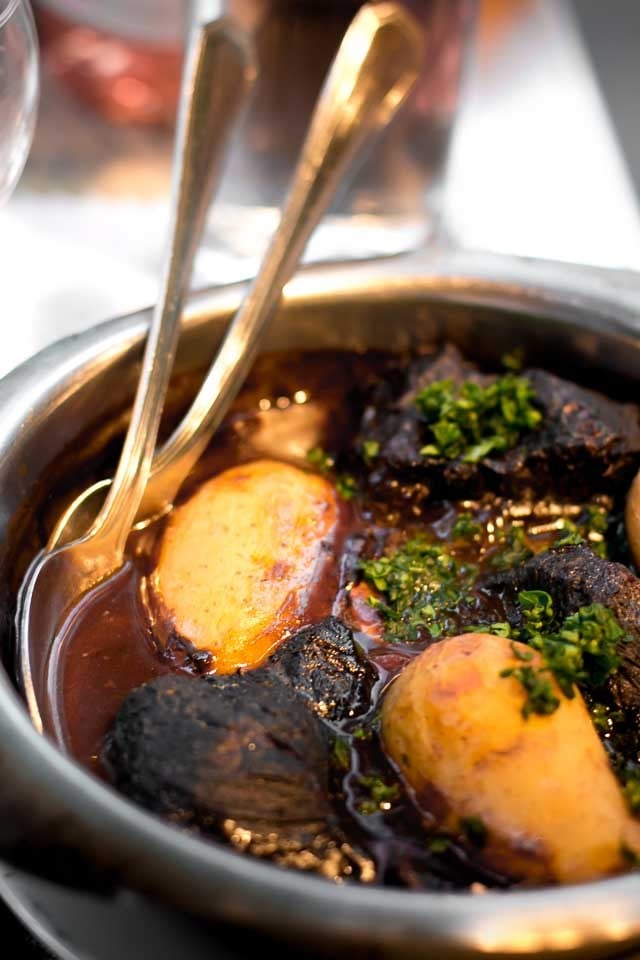 Afterward, we had a standard crème caramel which was just fine, and as we were settling the check at the bar (if you go to Paris and don’t want to wait for the check, it’s perfectly fine to head to the bar to settle up), Alain invited us to have a digestive. 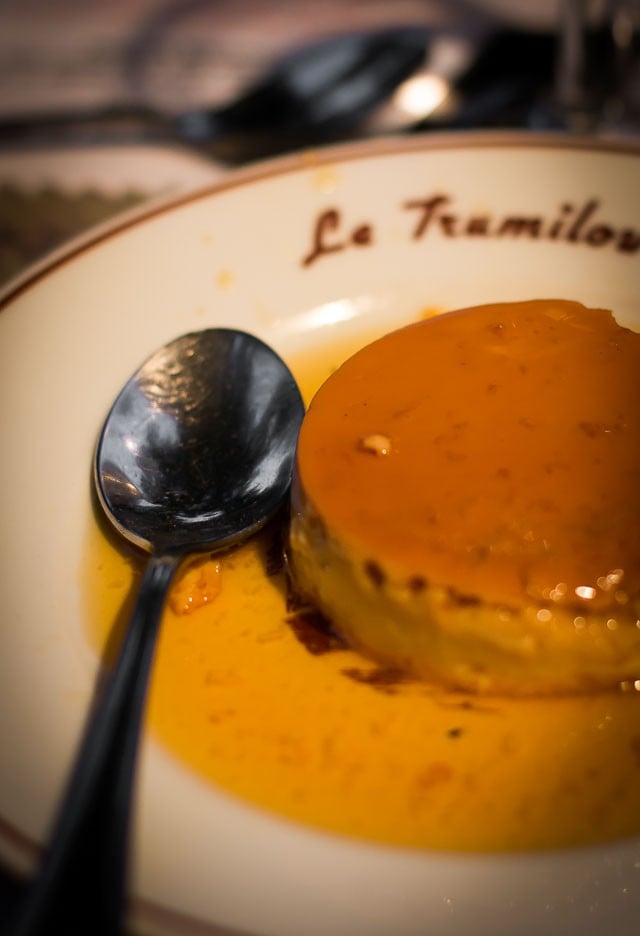 He told us that he liked his work and is very happy working in the restaurant, which they’ve had for thirty years. I doubt anyone could find fault with the way people are treated at Le Trumilou. Two tourists with a guidebook planted on the table, along with their iPhones (which Romain told them to put away, so as not to tempt those with nefarious intents), enjoyed their meal; when I asked one how he liked his steak frites, he smiled and gave it two thumbs-up.

So while most clichés were thrown to the wind that evening, on the way home, as we were walking up the nearby rue du Pont Louis-Philippe, a cobbled street, Romain stopped in front of a shop that was locking the door up for the night to take a picture of the church across the street and the proprietor scolded him for taking a picture on her sidewalk. 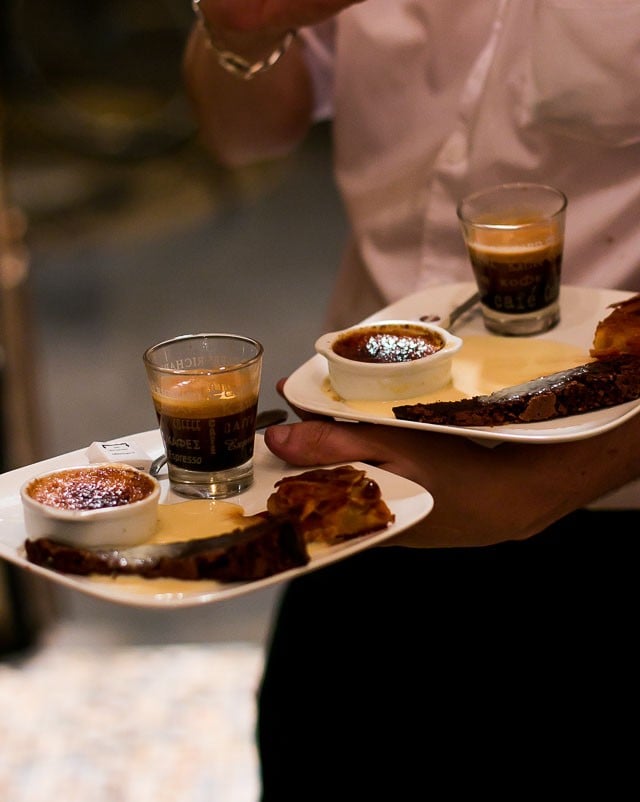 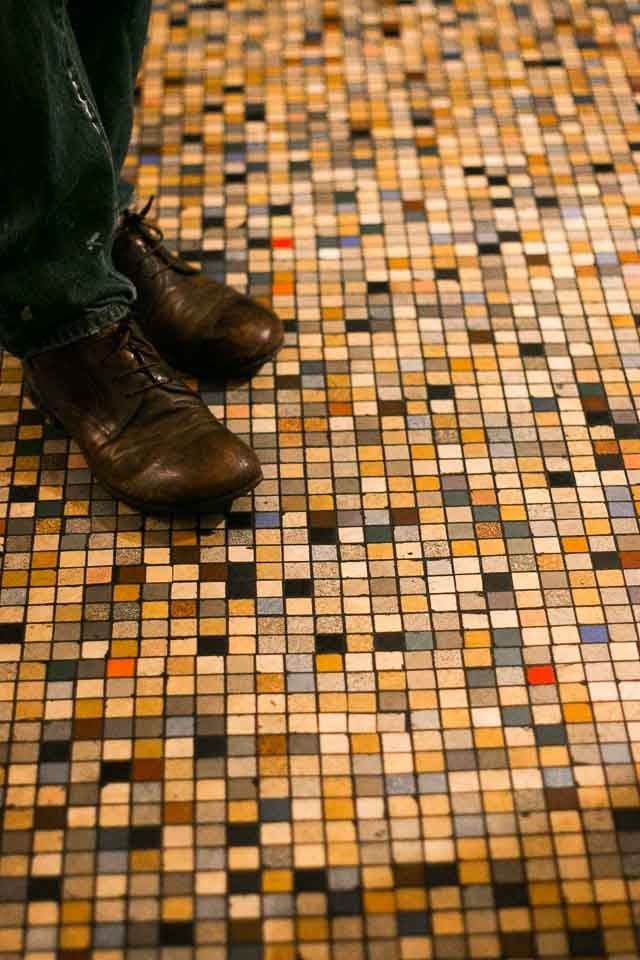 Paris is certainly a city of contrasts, which is why we all love it. The mix of the old with the new, the characters, and little places like Le Trumilou, that haven’t changed much in decades, if at all.

The 50’s tiled floor, the old bathroom signs, the clock above the hallway, inspired by the image on the RTF (French national television) screen just before the programs started, and the fact that not a lot has changed in decades, yet still feels like a place that you want to go to today. 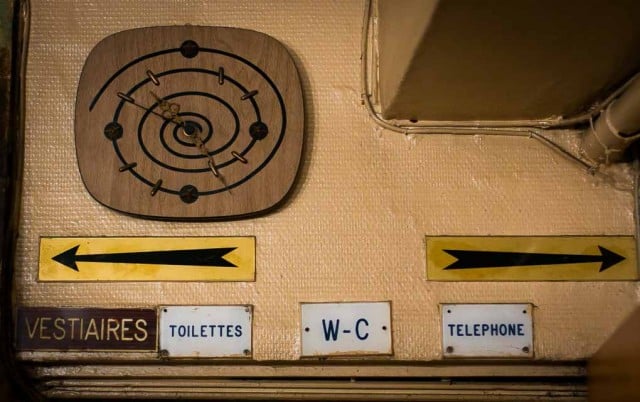 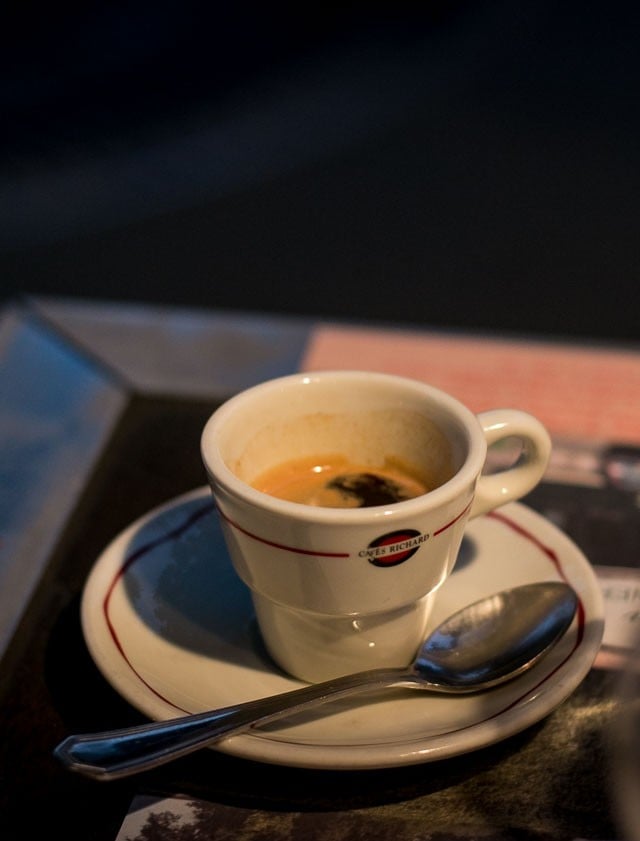 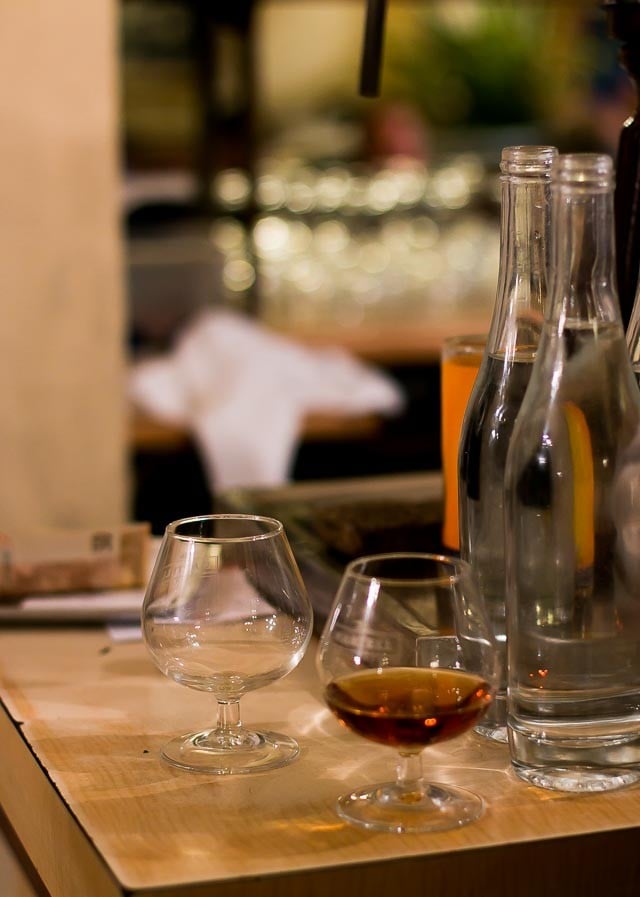