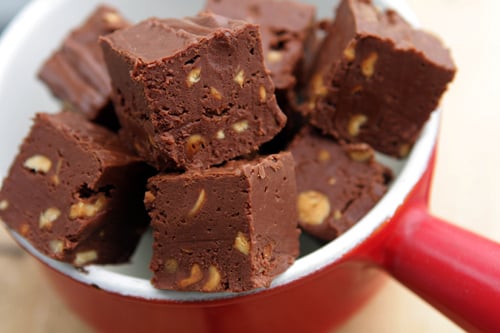 I was told by my somewhat better half that I wasn’t allowed to bring the construction crew – that is, the guys who are working on my apartment – any more treats until they picked up the pace. I don’t think the expression “No more monsieur nice guy” exists in French, but that seemed to be the tone of the sentiment expressed.

However being American, I can’t help being a soft touch and have been sneaking the guys treats over there. They’ve had everything from Date Bars to Panforte. Meanwhile back at home, as I am packing up my kitchen cabinets and boxing everything up for my move, I found a jar of marshmallow cream that I brought back from the states a while back, presumably to make some sort of cupcake frosting that I never got around to. 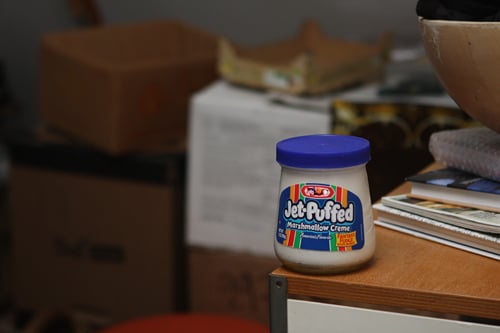 So I decided that a little marshmallow fudge never hurt anyone. And in fact, a little sugar is known to speed up the pace of things. Here’s hoping…

I altered the classic recipe slightly by using some unsweetened (bitter) chocolate. If you can’t get that, use 4 ounces bittersweet or semisweet chocolate. Of course, you can swap out any nuts that you like – or omit them altogether. A number of us DIY-types might inquire if regular homemade marshmallows could be substituted for the marshmallow cream. I haven’t tried it, but if you do, let us know in the comments how they work out.

Making Your Own Evaporated Milk (She Simmers)

*I realize that marshmallow cream has some dubious ingredients in it. But desperate times call for desperate measures and it really seemed to speed things up. And lo and behold, I went over to the apartment this morning and the plumbing in my kitchen is nearly completed, they’re installing a wc, and there is a hot water heater firmly in place. So please excuse any lapse in judgement, but I really need my kitchen done. (There’s an all-natural alternative in the links above.)