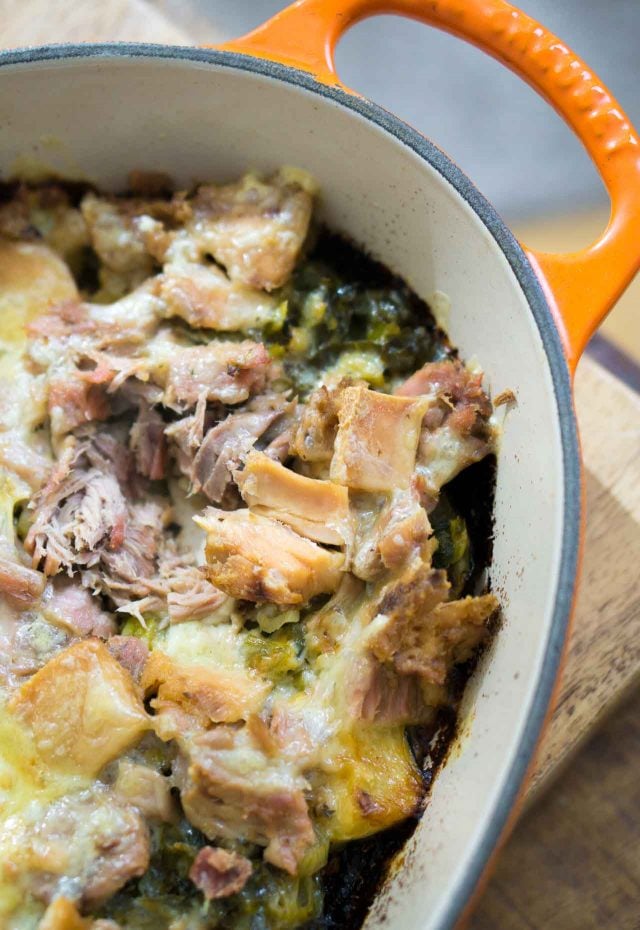 Someone was once trying out for a job at a restaurant I worked at, who cooked a meal that had a course which paired fish with cheese. I don’t recall if he got the job or not, but I do remember someone in the kitchen muttering, “Everyone knows that fish and cheese don’t go together.” I don’t know who gave him that information, but everyone who has ever had a tuna melt knows that, indeed – yes – they do. 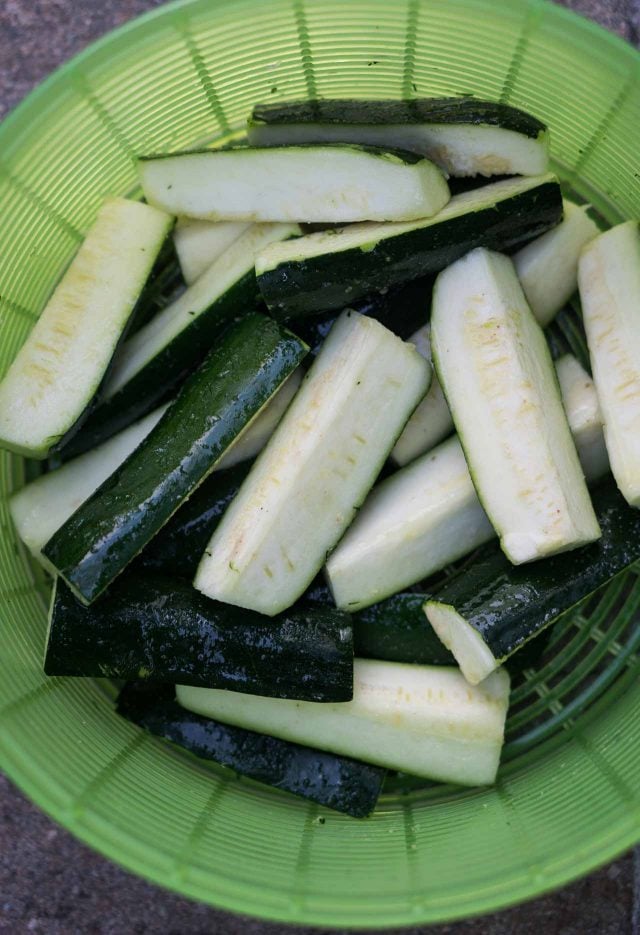 I’m not sure where the tuna melt came from, but it was always a favorite sandwich of mine. Sharp cheddar melted over a thick layer of tuna salad, spread on a piece of bread. I think we even made those in the GE toast oven when I was growing up, the one with a picture window and the two long black bars at the bottom, the longer one popping the oven door open with that familiar ker-clunk.

There’s also Tuna Noodle Casserole, which pairs the two seemingly incongruous ingredients, melded them in a baking dish, along with starchy noodles and a crunchy breaded topping. 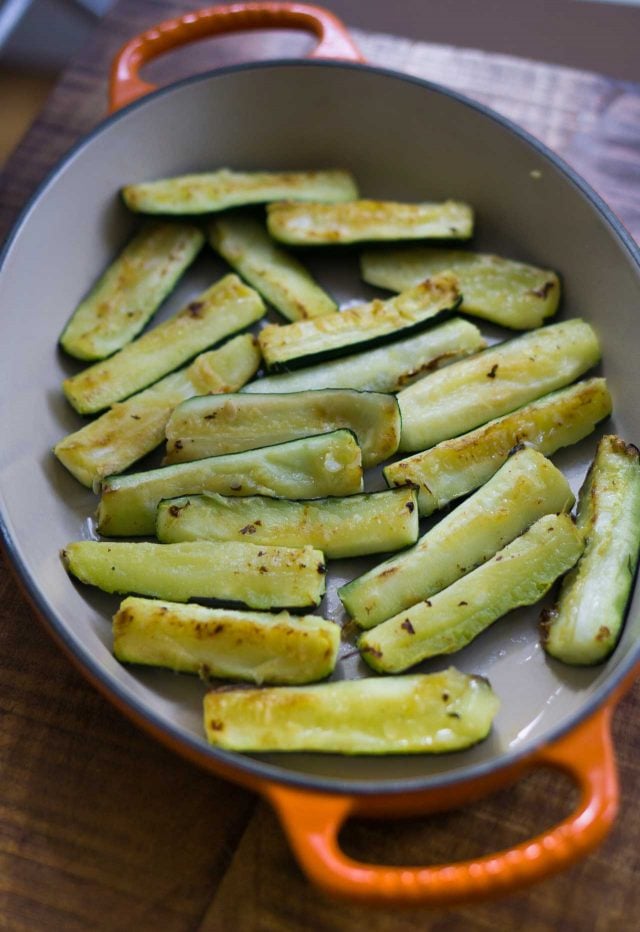 I haven’t had one of those in years either, but when I got the book Six Seasons, and saw this recipe, I remembered how much I liked that combination, and hauled out my gratin dish, and picked up a couple of tins of tuna. 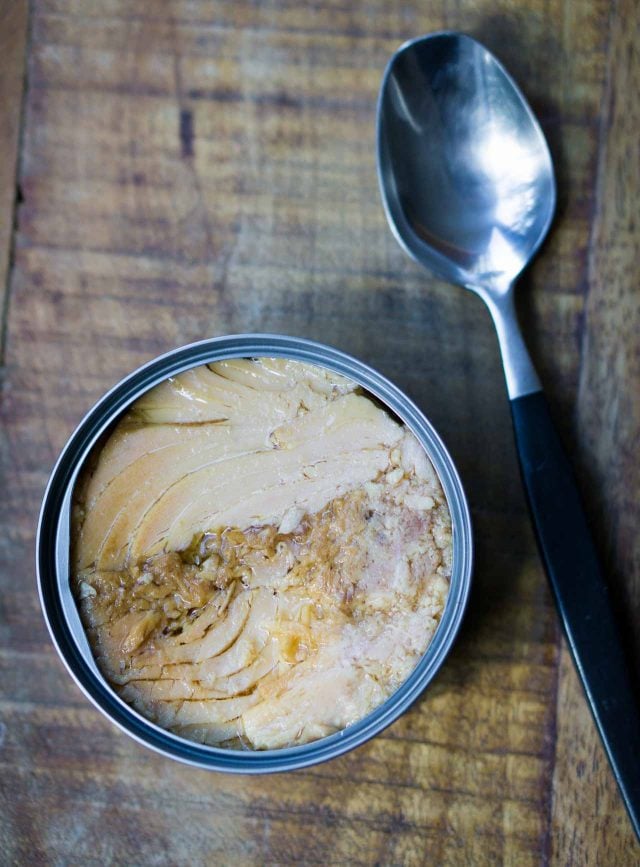 I love vegetables but am not especially creative with them and I often find vegetable cookbooks not super inspiring. I get them with high hopes about using them. But in the end, they languish on my shelf, testaments to unfulfilled aspirations. And I end up doing what I normally do; roast the vegetables in the oven with a little olive oil and salt, perhaps with a few branches of thyme or another herb.

Six Seasons, which is subtitled “A New Way with Vegetables,” really means it. It’s full of terrific ideas by Joshua McFadden that sprung out of the pages at me, with a similarly inviting ker–clunk. If you’ve ever wondered what to make with those funny looking rounds of kohlrabi at the market, or what to do with that half-head of celery you’ve got leftover from making stock, there’s a recipe for Celery, Sausage, Provolone, Olives, and Pickled Peppers, that he calls a “salad like an Italian hoagie, but without the roll.” The Braised Celery and Radicchio Salad with Perfect Roast Chicken also sounds worth trying, too. In fact, I may pick up a head at the market this morning, just to make that this weekend. 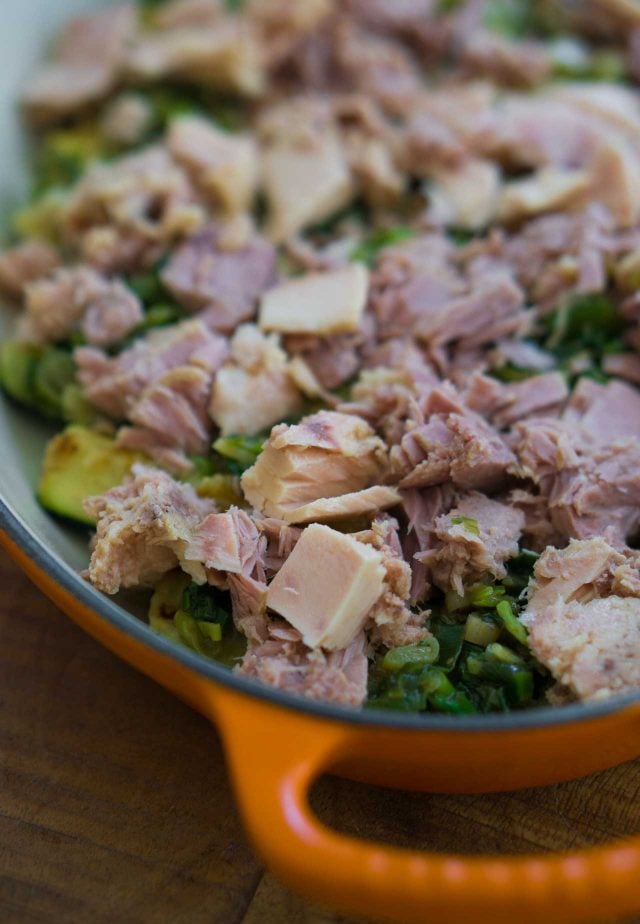 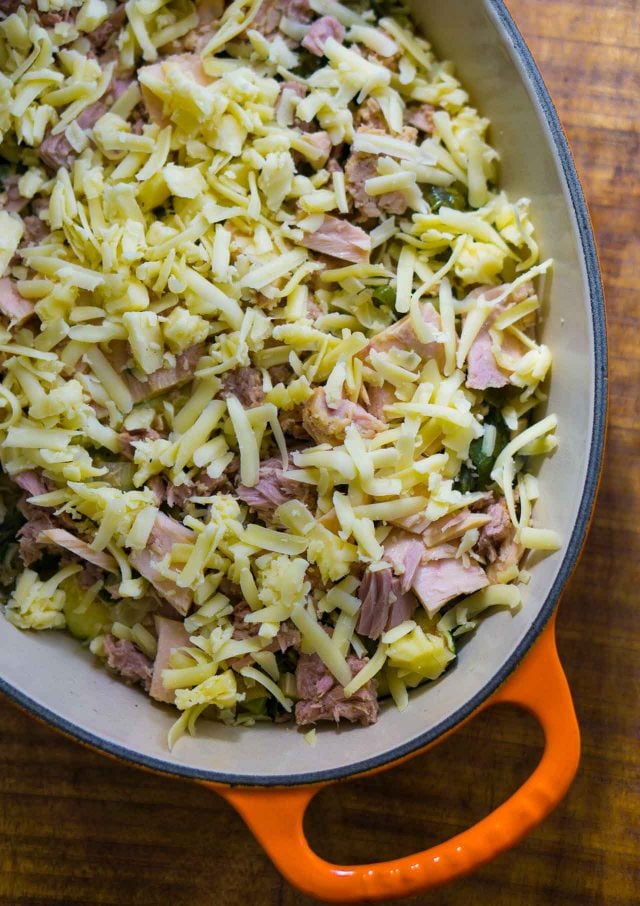 Similarly, this Tuna Zucchini Casserole recipe is meant to mimic Tuna Noodle Casserole, but without the carb-load of pasta, replacing it with healthier vegetables. And who doesn’t want to include more vegetables in their diet?

Admittedly, zucchini may not be in season where you are at the moment. If not, don’t worry. You could make this with roasted or braised broccoli, fennel, or rutabagas and parsnips. Another idea would be to braise some greens, like kale, Swiss chard, mustard greens, or collards, with some garlic (and perhaps a bit of bacon?), and bake the tuna and cheese on a bed of that. 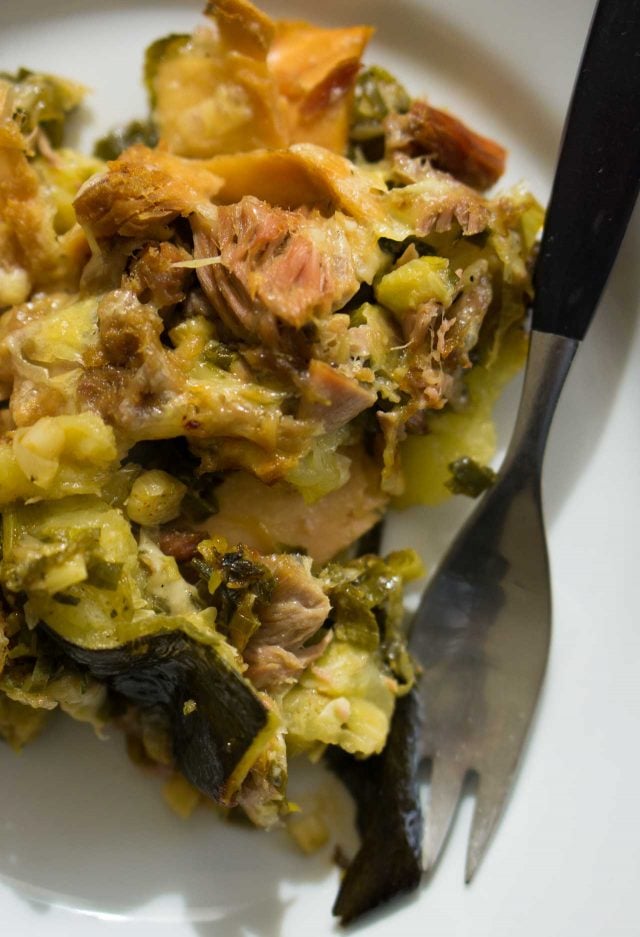 This is closer to a gratin than a casserole. And when I pulled it out of the oven, I started digging into the crusty bits around the edges, where the cheese fused together between the baking dish and the zucchini, creating caramelized bits of vegetable sweetness. The cheese on top bubbled and had that familiar chewy texture. Next time I get the craving for tuna and melted cheese, which I think is going to be more frequently now that I’ve had a nostalgic taste of it, I’m going to pull out this recipe and make it again. 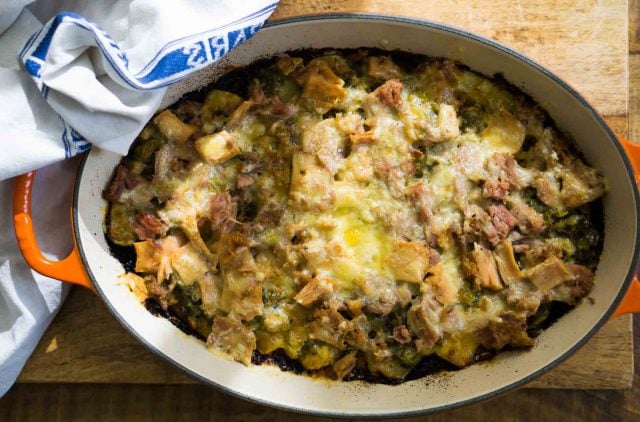 Adapted from Six Seasons by Joshua McFadden This is a warming casserole that can be made in advance, and baked right before serving. Simply do all the steps through step 4 and refrigerate it, until ready to bake. It's best to let it come to room temperature before you do, so it heats evenly. It's perfect for lunch or dinner, along with a big green salad, and a glass of white wine.
1 1/2 pounds (680g) small zucchini or summer squash
2 1/2 teaspoons Kosher or sea salt
1 tablespoon extra-virgin olive oil, plus additional oil for preparing the zucchini
2 cups (200g) thinly sliced scallions or spring onions
1 1/2 teaspoons minced fresh thyme leaves
freshly ground black pepper
1/4 teaspoon red chili flakes
2 tins tuna, preferably packed in oil, light or dark (5 oz, 140g. each tin)
1 1/2 cups (130g) grated cheese, such as Comté, Gruyère, Emmenthal, extra-sharp cheddar, or Swiss cheese
1. Trim the ends off the zucchini and if small, slice them lengthwise. If they are larger, cut them into batons about 3/4 inch (2cm) thick. Place them in a colander and toss them with 2 teaspoons of salt. Let drain for 1 to 2 hours, shaking and turning them a few times, coaxing the excess water to drain away.
2. Heat the olive oil in a skillet over medium heat. Add the scallions, thyme, some freshly ground pepper, the chili flakes, and 1/2 teaspoon salt. Cook, stirring frequently, until the scallions are wilted and soft, about 3 minutes. Remove from heat and set aside.
3. Preheat the oven to 450ºF (230ºC). Blot the zucchini dry with a paper towel and toss them with a bit of olive oil on a baking sheet. (You can line the baking sheet with parchment paper for easier clean up if you want, or if you're parsimonious with the olive oil and are concerned they'll stick.) Spread them in an even layer, cut side down, and roast them in the oven just until tender, about 15 minutes, but don't cook them to mush.
4. Remove from the oven and place the zucchini in a single layer in a shallow baking dish or gratin dish that will fit them snugly in an even layer. Strew the scallions over the zucchini. Drain the tuna and flake it over the scallions and sprinkle the cheese evenly over the top.
5. Bake until the cheese is melted and starts to brown and the casserole is heated through, 10 to 15 minutes. Serve warm. 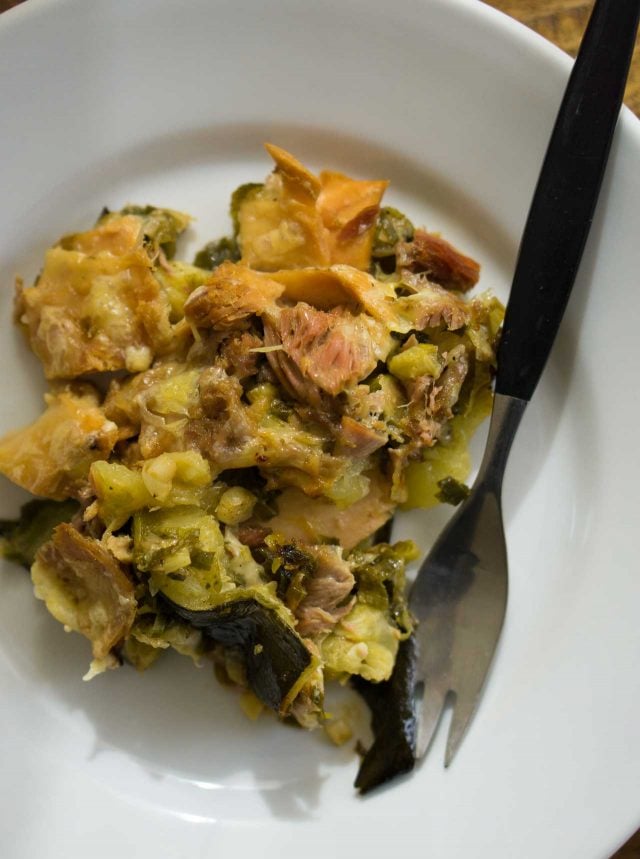 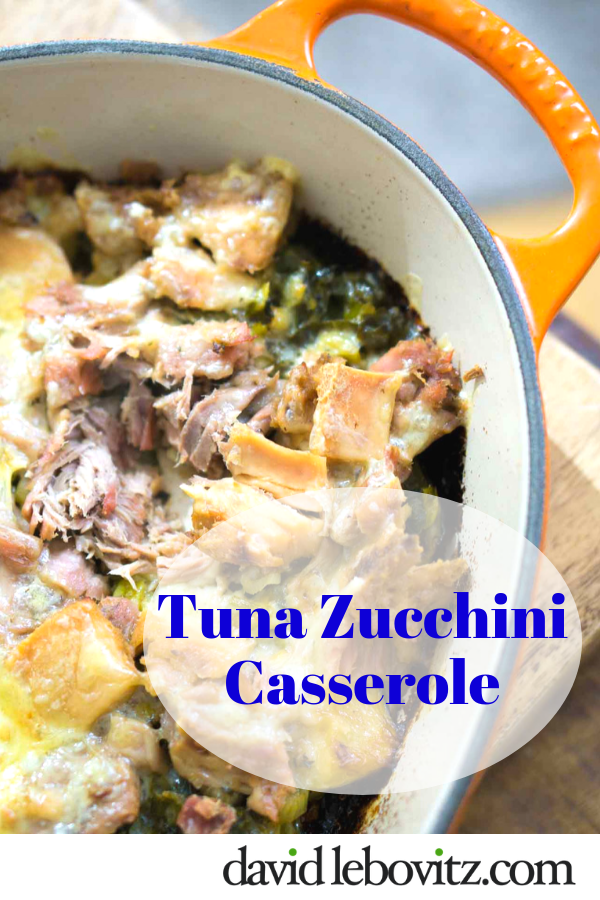