In spite of my reputation for serving guests only the finest cuisine I can muster up, I invited a friend for lunch yesterday and thought I could foist my can of salade Niçoise off on her, and I would be efficient and multitask with trying a recipe from a book I just finished.

Her visit, and my can of…um…salad?….presented me the opportunity to try The Spreadable Tuna Mousse from Mediterranean Summer by David Shalleck. 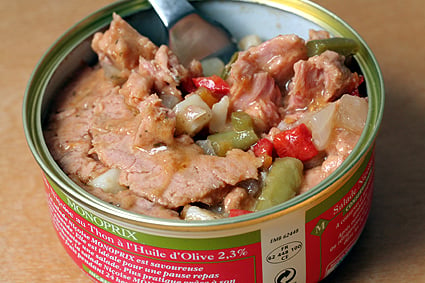 But then I opened the tin, took a look inside, and…”bleech!”

Ever the optimist, I dumped my fancy feast in my mortar and pestle anyways.

But the bottom looked even worse than the top—which you’ll just have to trust me on since I felt uneasy subjecting you to photos of both. It was a real Mediterranean bummer and certainly not Nice…or even niçoise-ian by any definition (unless Nice is full of stinky fish sludge, with chunks of greasy vegetables mixed in.)

The tuna on top looked relatively decent but the bottom was layered with starchy potatoes, flaccid green beans, and Lord knows what else. And when I took a tiny nibble, the whole thing had the appeal of eating an acidulated, well-used tennis sock soaked in oil you wouldn’t even put in your car, then packed up in a can and foisted off on some unsuspecting American to write about on his blog.

Which explains how they sold one. But what are they going to do with all the rest?

So I scraped it out and dumped it all, sterilized my mortar and pestle in the autoclave, burned some sage to clear out the bad spirits from my kitchen, and ran to the store to get more tuna.

(I know, I could’ve opened my other two tins, but I think I had enough tuna-tinged excitement for one day.) 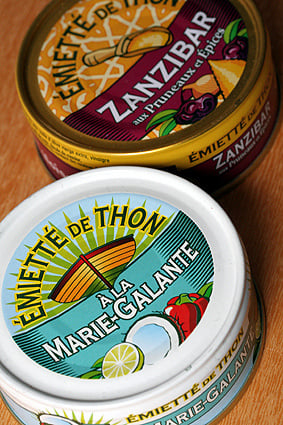 But unlike the salad-in-a-can concept…and as you can see above, France has some much more appealing versions of tuna-in-a-can…I did take a shine to the book Mediterranean Summer. It’s the story of a self-professed, slightly-cocky American restaurant chef who goes to Europe to learn about cooking, but ends up getting an education far exceeding what he originally bargained for while cooking on a private yacht in the Côte d’Azur and cruising Italy’s Costa Bella over the series of a few summers.

After a couple of pages I was cent percent absorbed in his story, from how he got a tongue-lashing (and firing) from the formidable Nathalie Waag just after his arrival in Provence to learning the ropes, so to speak, cooking in a cramped galley on a private yacht for his very demanding Italian clients.

The stories about procuring ingredients and learning to tailor what he was doing was a diverting page-turner as well as an unconventional story about how someone finds his way as a chef. His ultimate education comes from learning to find the best ingredients from the regions they travel through and presenting them using techniques he picked up from various stints in Italian and French restaurants. All in hopes of his ultimate approval—from the demanding family he’d been hired to cook for.

But one thing he wasn’t prepared for was having to learn to be ready for anything at a moment’s notice, from an impromptu sit-down dinner on-board for one hundred guests served on the finest finest china, or heaping plates of fresh pasta at 3 am for partied-out vacationers, who snap him out of his deep slumber after cooking all day. All in a tiny galley. So he kept a pantry of good-quality tinned items and one was oil-packed tuna. (He was smarter than I, though, and kept his tinned tuna purchases to ones with greater potential than mine.)

My one quibble with the book was that the recipes were in a separate chapter in the back of the book and I thought it would’ve been nice if they were where they appeared in the narrative. But with all the problems in the world right now, if that’s my only problem that’s pretty pathetic. So I’m letting it go.

Adapted from Mediterranean Summer (Broadway Books) by David Shalleck, forward by Mario Batali. David didn’t call for any garlic in the recipe since his upscale clients put the kabosh on it…perhaps so they wouldn’t have tuna and garlic breath at the same time with their fancy friends. But next time I make it, I might pound in a small clove, preferably roasted, and to heck with anyone else around me. I also livened it up with a pinch of smoked chili powder for good measure. My local supermarket only had miettes de thon in sunflower oil which is flaked dark tuna but I definitely recommend following his instructions and using good-quality tuna packed in olive oil for best results. This is a fabulous recipe to have in your repertoire and can be made from ingredients most of us already have on hand.
1 tablespoon light soy sauce
1 tablespoon balsamic vinegar
1 tablespoon fresh lemon juice
10 ounces (280g) olive oil-packed tuna, drained
1/8 teaspoon pimente d'Espelette, or a nice pinch of chili powder
5 tablespoons (70g) butter, salted or unsalted, cut into cubes
2 tablespoons heavy cream or crème fraîche
1. Mix together the soy sauce, balsamic vinegar and lemon juice.
2. In a food processor or mortal and pestle (which I used) process or pound the tuna until it’s broken down but not smooth. Mix in the liquid seasonings and process or pound until the mixture is smooth. Add the chili powder.
3. Add the butter bit by bit, adding each cube only after the previous one has been incorporated. If using a food processor be careful not to overdo it as the heat from the machine can cause the butter to melt.
4. Add the cream or crème fraîche just until it’s incorporated. Although he advises that this should be served near room temperature, I found it’s a bit more appealing served chilled. Either way, serve it along with small toasts or crackers, or a sliced up baguette. I could imagine it as an excellent spread in a sandwich along with some slices of tomato, chopped black olives, and a tangle of peppery arugula too.
The mousse can be refrigerated, well-wrapped, for up to three days.

Although he advises that this should be served near room temperature, I found it’s a bit more appealing served chilled. Either way, serve it along with small toasts or crackers, or a sliced up baguette. I could imagine it as an excellent spread in a sandwich along with some slices of tomato, chopped black olives, and a tangle of peppery arugula too.
The mousse can be refrigerated, well-wrapped, for up to three days.