Doing a culinary tour in Paris is always fun, because not only do I get to meet some new people and make new friends (important…since the old ones keep deserting me), but I get to revisit my favorite places in Paris. And this week, we made a detour in Lyon as well. So there was a lot more to see, and eat… 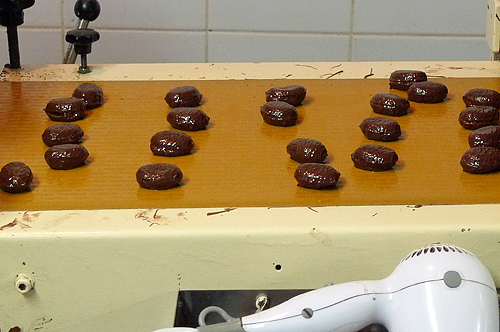 Lyon is a wonderful city. Kind of a miniature version of Paris, but younger, more spacious, and more relaxed. The people are plus cool, and in less of a rush—perhaps because they are so busy digesting all that rich food down there. 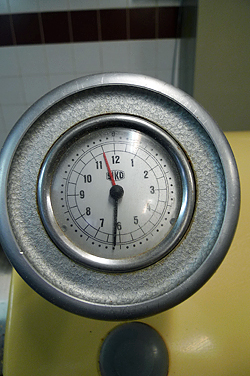 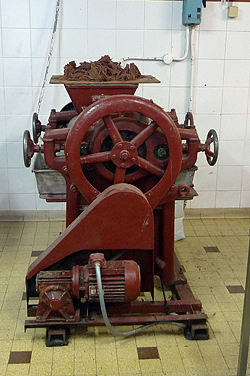 I’ve written about Bernachon before, and this trip, we had an especially warm greeting in their adjacent café, starting with puffy brioche and warmed pitchers of hot chocolate, made with the famed bean-to-bar chocolate that’s fabricated just a few doors away. 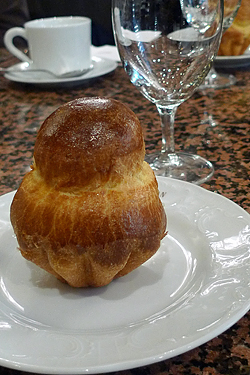 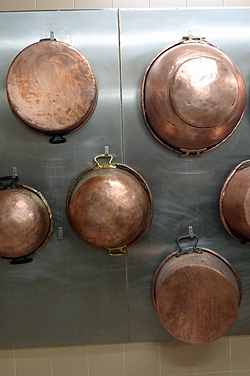 It’s no secret that I love Bernachon chocolate.

But can we talk about their copper collection? I swear, if I could have fit one under my shirt, and on the overhead bin of the TGV train, I would have. 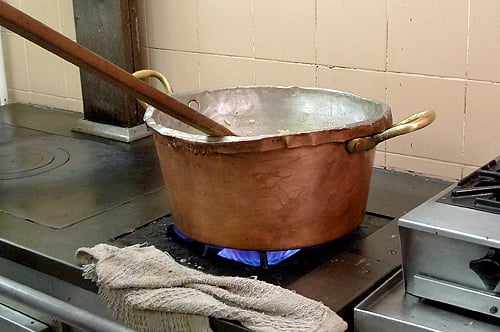 Speaking of guess-what’s-under-the-shirt, Chef Pascal, their head chocolatier, gave us a wonderful look in the chocolate production room and kitchens, where this world-renown chocolate is made. 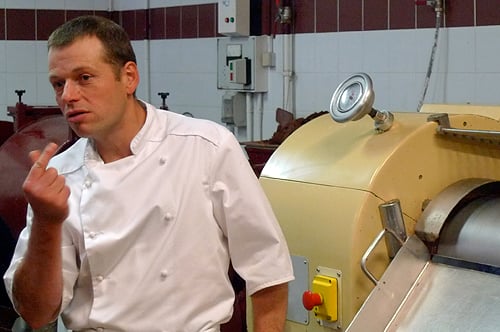 There was chocolate everywhere… 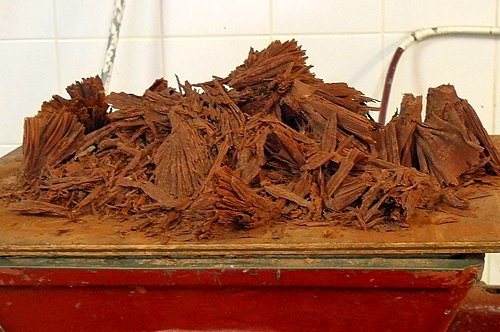 But man, nor woman, cannot live by chocolate alone… 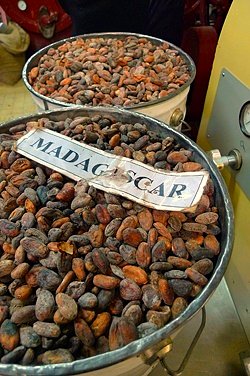 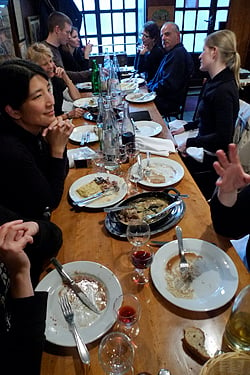 So we headed off with Lucy, to Abel Café Comptoir, a bouchon, one of those only-in-Lyon places that seem to be frozen in time, and serves gut-busting dishes with little attention to dietary trends.

Yes, that’s my chicken, somewhere under the thick blanket of cream. But since the French live longer than we do, I figured they know something that I don’t know, so I dug out a creamy morsel, which went down fairly easily, courtesy of a cellar-temperature pot of Côte du Rhône. 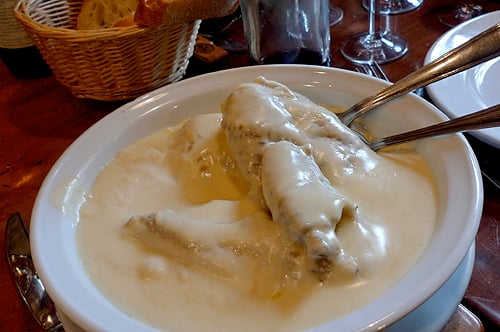 For those who preferred something lighter, there were andouillette sausages bathed with buttery mustard sauce. Yet don’t be alarmed: the style of eating in Lyon is en famille, and the big bowls of food that they set down on the table are (usually) meant to be shared. 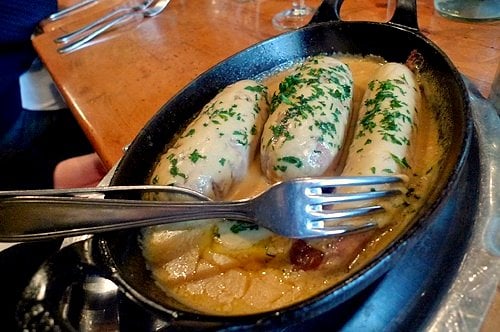 After we waddled off, we strolled around Les Halles, a great food market trapped in an ugly modern building (an unfortunate French paradox), which you’d never guess stockpiled the best of the locally-produced meats and cheeses, especially the creamy-soft disks of Saint Marcellin cheese and fat, plump, meaty sausages.

On that train back to Paris everyone would’ve slept had it not been for them keeping a close eye on their Bernachon bags, because I’d warned them that I had sticky fingers and one guest beat me at my own game, swooping up a majority of the salted butter caramel-filled Kalouga bars before I could. The master is outfoxed by his pupils.

Still, believe it or not, some people managed to get some winks in before landing at the gare de Lyon. 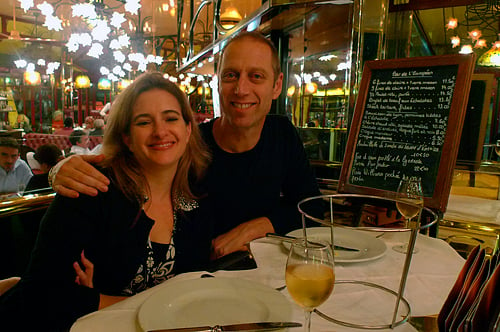 And after verifying the contents of their bags, a few of us hardy souls gathered up the strength to tuck in a bit more food, and hit l’Europeen, just across from the station for oysters and chilly glasses of Mâcon, a full-bodied Burgundian chardonnay that was so good, I proposed to one of my guests right then and there. And she accepted. 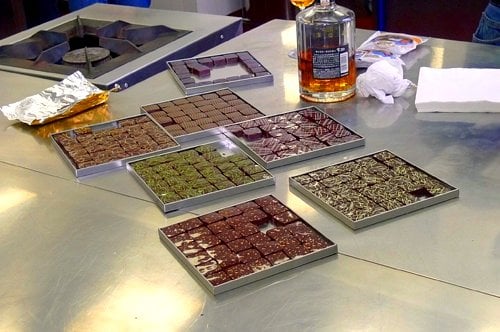 Aside from planning our upcoming nuptials, other highlights of the week that was happened on Monday, our first day in the laboratoire of Jacques Genin. Mort Rosenblum explained what Jacques does, while Jacques spent his time picking on me, much to the delight and amusement of all.

Except me. And I still have the marks on my neck from when he tried to choke me a few weeks prior. But I forgive him because he makes great chocolate. And brings out his best 21 year old Japanese whiskey just for us.

Another highlight of the week, and slightly less-hazardous to my health, was a market tour and cooking class with Paule Caillat of Promenades Gourmandes.

I can’t reveal too much, but let’s just say that my group got to experience a French paradox or two for themselves. Such as being told at the start of a cheese-tasting that it was interdit to make a sandwich out of the cheese.

Then our chef du jour proceeded to slide a morsel of cheese in between a piece of baguette, and pop it in her mouth.

I covered, explaining it was the ‘chef’s prerogative’, but there are ten additional people out there now that know that I make none of this up. And when we were done, all my guests told me that our day and class with her was one of their favorite parts of the week. Which goes to show why we love the French, and all their quirks and charms. (Well, except my cable company.) 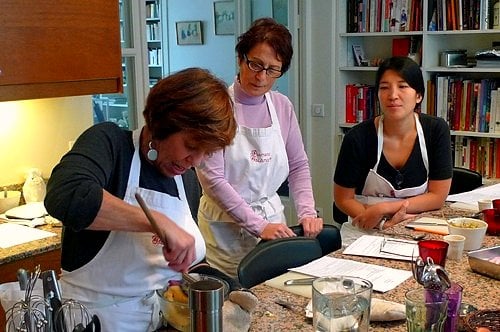 I had also insisted that she make her famous French tart dough recipe, which everyone loves, but man cannot live by butter-rich pastries alone, and while I poached some quince to go into the almond-based tart filling, she led us past the cheese tasting before our lunch, which began with twice-baked soufflés, surrounded with “Just a little bit of cream”, Paule said—while, of course, pouring it on. And we feasted around her gorgeously-set dining table on braised pintade (guineau fowl) and fresh fennel, sautéed then finished and glazed with reduced chicken stock.

Other days included visits to the macaron-making kitchen of Gerard Mulot, a wine tasting and dinner in the loft of Olivier Magny of O-Château, a comprehensive cheese tasting in a fromagerie, a generous sampling of Spanish ham and silky strips of Italian lardo, then finishing it all off with heaping cups and cones of Grom chocolate and coffee gelato. 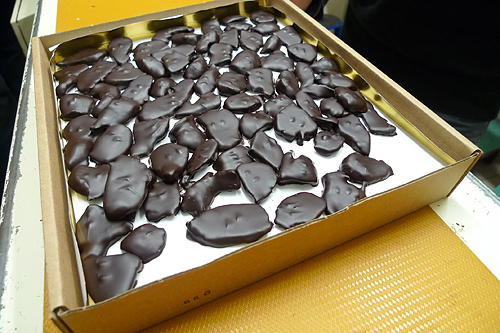 The last day we ended up at Fouquet, before our private dinner with the fine folks at Hidden Kitchen. Which was after a backstage visit to Fouquet. 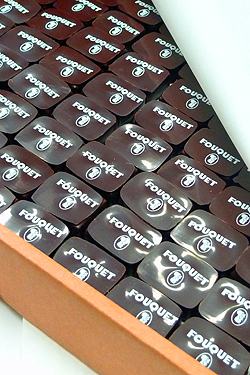 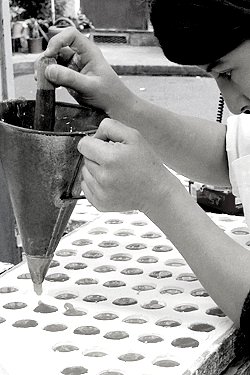 Fouquet is one of my favorite candy shops in Paris and one of the few that makes everything right on the premises, behind their classically-restrained wooden shop on the rue Lafitte. 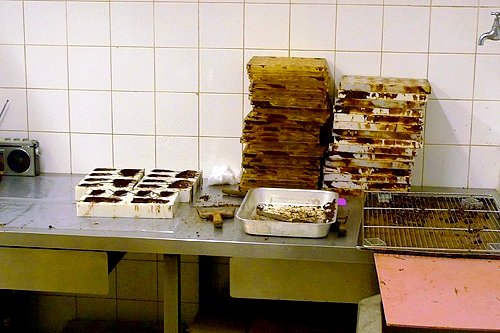 They were just ramping up for Christmas, the biggest holiday of the year for chocolatiers in France. (I asked about Valentine’s Day, and they told me “Rien“, or “It’s nothing”, in France.)

And while I had thought that I’d tasted everything in the shop on previous visits, genial owner Frédéric Chambeau, pulled down a box of les croustillants, very crisp almond cookies with a hint of cinnamon enrobed in dark chocolate. They were as thin as playing cards and I wished I was playing with a full-hand.

It was like the whole room stopped, and we all agreed that these were really le top du top, the best of the best. And I remedied the situation by having them pack up a bag for us for a little after lunch snack later on. 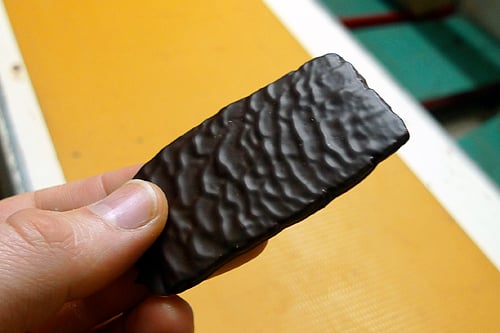 I thought I was a know-it-all, but I didn’t know that Fouquet makes their own vinegars in the basement, and a wicked rum punch à Sidonie, where limes, tropical fruits, and spices are marinated in dark rum for six months, then filtered into bottles and sold in the shop.

I didn’t get one, since Frédéric offered to have me back for a taste. And not that I need a reason to come back, but it is nice to have one.

For those interested in future Paris Chocolate and Gastronomy trips, I offer one or two week-long tours during the year. They fill quickly, but if you subscribe to my mailing list and newsletter, you’ll get notified as they’re announced.