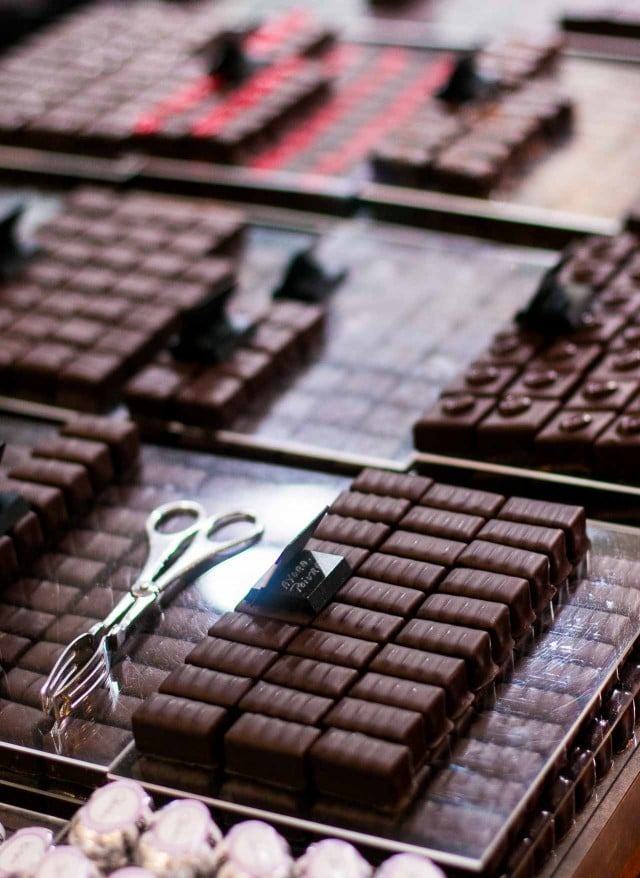 Jean-Charles Rochoux has perhaps the tiniest chocolate shop in Paris, located on an unassuming side street off the Rue de Rennes. It’s hard to see and easy to miss if you’re not looking for it. But what causes most passers-by to stop are the window displays, filled with intricately-sculpted statues and figures, crafted entirely of chocolate.

M. Rochoux spent many years in the workshop of Michel Chaudun, one of the best chocolatiers in Paris. And indeed, a look around this sleek boutique reveals much inspiration from M. Chaudin, including his version of Colomb, little disks of chocolate studded with cocoa nibs, and Les Pavés, tiny cubes of chocolate ganache that instantly dissolve in your mouth, the lingering pleasure lasting a few precious minutes. Then you decide it’s time for another. I always buy at least six at a time for that reason.

But stacked discretely in the corner are stacks of chocolate bars, and after we had a lengthy discussion on chocolate one day, M. Rochoux handed me a tablet labeled noisettes to take home as a gift. When I got home, I tore open the wrapper and took a bite. I was completely surprised by what I found inside.

Each individually roasted hazelnut was coated in crunchy, crackly caramel, then enrobed in the chocolate bar. The contrast of hyper-crisp hazelnuts and bittersweet chocolate makes this my new favorite chocolate bar in Paris.

Although I love finding something new, sometimes I have the opportunity to discover something nearly forgotten. A few years ago I had the pleasure of touring the workshop and chocolate boutique of the world-famous Bernachon, in the city of Lyon. Not only does Bernachon make great chocolates, they actually make the chocolate itself. Let’s say you go to a shop to buy filled chocolates, or bars of chocolate. You’re buying chocolate that the chocolatier has bought (and perhaps mixed to his or her specifications). That’s the difference between a chocolatier and a chocolate-maker. There are very few chocolate-makers in the world, only 14 exist in the United States at present*. Bernachon is a small shop, but it’s stunning what they’re able to produce. I love Bernachon chocolate, although it’s nearly impossible to find outside of their shop in Lyon. But what great chocolate it is and it’s certainly worth the 2-hour TGV ride from Paris. Their most famous bonbons are the seriously-rich, ganache-filled palets d’Or flecked with bits of real gold. At the shop, they barely have time to keep them in the showcase, as customers come in, the saleswomen fill boxes directly from the decades-old wooden storage trays. But when I visit, I stock up on their chocolate bars, which allow me to commune with the pure chocolate all by my lonesome. I like the Nuit et Jour, the Night and Day bar, where one side is bittersweet dark chocolate. Flip it over, the reverse is smooth milk chocolate. Moka is made by grinding roasted coffee beans along with cocoa beans for a double-buzz, and Extra Amer is a super-dark bar of chocolate with very little sugar. It’s bliss for some, and too intense for others.I fall into the first category. But my absolute favorite is Kalouga.

Kalouga is a rather funny name for a chocolate bar. It’s the Basque word for ‘Caramel’ (any scholars of the Basque language out there?) But I found the Basque word for tasty, gustagarri, and that’s what this is. I first tasted one of these bars about 5 years ago but was dismayed to find they stopped making it since. Too much of the luscious caramel would begin oozing out after the tablets were made and it was problematic to store them.

But I kept asking them to make them, and word got back to them that there was an American living in Paris who was insane for them. And lo and behold, they’re back in production! (Yes, that was the story I was told…whether or not I believe it is another story…)
Either way, you may thank me later…once you’ve tried one.

Once you bite inside, the gooey salted caramel immediately begins spilling out, and it’s hard not to eat the whole thing at once. If you’re the generous type, I recommend opening it when you have a bunch of friends over to share the bounty. Otherwise, you can just eat the whole thing yourself. Guess which I did?

(Bernachon chocolate bars are also available in Paris at A l’Etoile d’Or.)