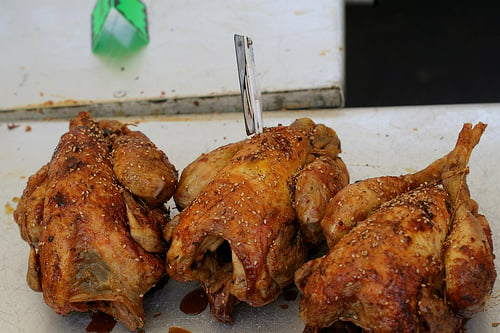 When I moved to Paris, I was pretty shocked at how expensive things were. And I don’t mean Louis Vuitton suitcases or Kelly bags. Something as simple as a sponge at the supermarket would cost 4€ or a plastic storage container at the BHV might run you 15€ around here.

Then I learned about the Paris pas cher stores all over town. Although concentrated mostly in the less-chic neighborhoods, they’re sort of ‘catch-all’ shops that sell everything from scissors, thongs, cookware, hammers, luggage, shampoo, and old Nicole Kidman movies she made when she was a teenager.

I’ve found they’re great places to scratch your shopping itch. You never know what you’re going to find exactly, but they’re great fun to wander through and see what they’ve got if you pass one. You’ll know you’ve found when if there’s lots of stuff hanging from the ceiling, stacked out front, and piled high if you peek inside. Frequently there’s an overwhelming smell of insecticide or mothballs, but you get used to it after a few years, I guess. (Judging from the people who run them, who seem to be oblivious.)

Paris pas cher, in case you didn’t know, means ‘Paris Not Expensive’, and the term is also used to denote bargains in the city. Since the dollar is tanking, I thought I’d share a few of my money-saving tips with you I’ve learned along the way:

If you’re sitting in a café, you’ll notice that few people are drinking soda. Most are lingering over tiny coffees, which cost about 2€ instead. You can stay as long as you want without having to order anything else once you’ve finished, no matter what you ordered. My theory is people order coffee because it’s the cheapest thing you can get. I’m often guilty of that too. (If they ask you to pay, it’s usually because the waiters are changing shifts, so don’t fell obligated to split.)

Standing at the counter cuts the prices roughly in half so if you’re just looking for a quick thirst-quencher or a shot of caffeine, you might want to stand.

(I’m a total rube myself. One of my first times in Paris, I ordered a coffee at the counter, then carried it over to a table. That got quite a response!)

In a café, order wine by the carafe which is usually drinkable and inexpensive. Don’t feel like you need to spend a lot of money on wine in a regular restaurant either. Unlike in America, it’s easy to find good wines in the 15-25€ range. Don’t be afraid to order the Vin du mois or something they’re featuring.

Don’t Take Breakfast at Your Hotel

Although it’s tough to get a bargain outta ’em (faire un prix), when looking for a hotel, ask if they’ll include breakfast. Winter is notoriously slow and they may include it if you ask. This is especially true if the breakfast offered is just going to be a ‘continental’ breakfast: bread and coffee, which isn’t worth the extra 12€ they might be charging.

If you don’t take the breakfast, you can always go to the café on the corner for your petit dejeuner, although sometimes it’s nice just to stumble in your jet-lagged daze downstairs to the lobby for coffee.

There’s lot of top-notch restaurants in Paris where you can get a terrific…no, make that superb…three-course meal for 30€ including tax and tip. I ate at one last night, and had a salad of cured quail on a bed of lentilles de Puy. That was followed by slices of moist rabbit loin on a rectangle of baked macaroni and cheese, which was finished up by a warm crêpe filled with homemade bitter orange marmalade and a scoop of housemade ice cream. Our wine was a 22€ bottle from the Savoie.

I don’t know about you, but I can’t think of any restaurant in San Francisco or New York that offers a three-course meal with wine for less than $50pp, including wine, tax and tip. If you avoid the high-end places, there’s great bargains in Paris.

Most restaurants and cafés offer specially-priced formulas for lunch. A simple corner café lunch can be had for around 12€ and even the high-end places have fixed-priced menus that are much more affordable than at dinnertime.

Buy What You Can’t Get At Home

At almost any bakery, no matter where you go in Paris, a croissant or freshly-baked baguette costs less than one euro, and I defy you to find either of those in any major US city for the same price. And there’s little that’s comparable to a Pierre Hermé dessert or little sack of bitter chocolate macarons from Ladurée, no matter what the price.

Other things native to France that are well-priced: Parisian chocolates, sea salt such as fleur de sel, wine, and raw milk cheeses.

(For cheese-lovers, there’s the very friendly Fromagerie 31 at 64, rue de Seine, that offers degustation plates of 5, 7 or 9 cheeses, which you’re invited to choose from their selection, which includes a salad as well, starting at less than 10€ Wine is available by the glass too. (Update: As of April 2010, Fromgerie 31 is closed.)

And while you’re in Europe, eat Spanish Iberico ham and lomo, and foie gras. (I recommend Bellotta-Bellotta and da rosa.) Since they’re illegal or prohibited in some places, eating them at any price is a bargain.

Although the dollar is weak, you can shop in department stores, taking advantage of their 10% discount cards for tourists (bring your passport to prove it), then you can take the de-tax of 12% if you spend around 170€. While the math proves it’s still not a huge bargain, there’s many items, especially clothes and housewares, unavailable elsewhere that you’ll find here that you can’t get in the states.

If you’re into clothing, there’s great depot-vente‘s, or used clothing shops, around Paris and a search of Google will pull up addresses. Don’t mind the snooty attitudes in some of the places. Just like us, the people working there couldn’t afford to wear new couture either!

Chercheminippes
Various addresses on the rue Cherche Midi, in the 6th

In your effort to save money, spend where it’s important.

If it’s late and you’re wiped out, spring for a taxi home rather than killing yourself taking the métro late at night. If you’ve had a rough day of museum-hopping, or shopping, sit in a café with that overpriced Coca Light and watch the world go by. You’ll pay for it, but the experience is quintessentially Parisian and priceless.

It’s not worth ruining your vacation to try to save a few bucks.

In my opinion, the Porte de Clignancourt flea market, which is the most famous, is nothing more than a high-end antique mall. And an expensive one at that. Personally, I don’t think it’s worth visiting unless you’re looking for something chic and pricey. You might disagree, but from what I’ve seen, the prices are outrageous. And watch your pockets up there too.

Lesser-known to tourists is the Porte de Vanves flea market, which is a real flea market. Much more so than Clignancourt, and a lot more fun to poke around in. Your money will go farther there, but some of the dealers drive a very hard bargain, especially when they get a whiff of our anglo-accent.

Still, there’s some really cool stuff, a little bit of everything, and bargains can be found and a bit persistence can pay off. It’s harder to bargain with large bills and no one seems to have change ever, so come prepared.

If you’re coming for a week, you can buy a Carte Navigo for around 16€ that gives you unlimited rides on the métro, buses, and RER’s within Paris. Intended for residents, most tourist have no trouble buying one at the ticket counter. Bring a stamp-sized photo of yourself and the cards can be bought Sunday, Monday, or Tuesday and are good for that week, from Monday morning through Sunday night. You can also get a Paris Visite card good for 1, 2, 3 or 5 days. Although if you want a one-day card, it’s more economical to get a Carte Mobilis instead.

Or you can buy a carnet of 10 tickets, priced at about €12, which can be used anytime.

If you’ve got any tips to share, feel free to share them in the comments.
I’d love to hear them.

The Best Duck Confit in Paris