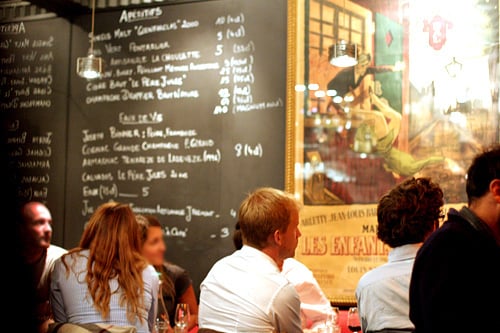 [UPDATE: Philou closed in 2019 and a new restaurant opened in its place, L’Angélus du Canal.]

I always want to put Philou in my Paris favorites list. It’s got so much going for it; a friendly staff, it’s just enough out-of-the way that it attracts a good mix of mostly people who live in the neighborhood with others who come from other parts of the city, their menu features game and wild birds when in season, and when I look at the handwritten chalkboard, everything on it looks good. Plus the prices are gentle, at just €25 for a 2-course menu, or €30 if you choose three courses*. It’s what I would like to call an eminently likeable restaurant, but I’m always afraid I’m going to spell ‘likeable’ wrong and get in trouble for it. So let’s just say that it’s the kind of place that I really like. 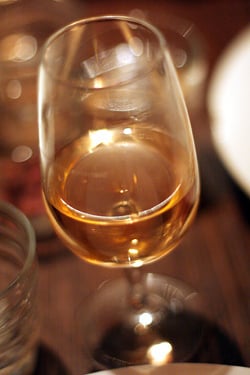 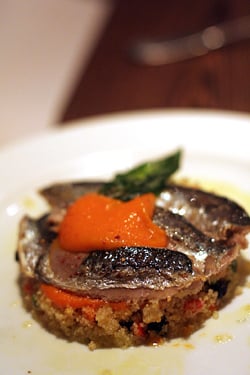 Speaking of things I like, I also like the fact that they have an ample list of wines by the glass (€4), 1/2 liter, or full liter (€26), all democratically priced. Clinging on to the last vestiges of summer, in spite of the chilly air outside, we drank a Bandol rosé with dinner. Served by the liter, it was more of a vin gris, a less-fruity, more ‘serious’ wine than traditional rosé.

First up, when I saw the sardines with semoule (fine couscous) at the neighboring table, I decided that I had to have that. I love fresh sardines and while the dish was good, it was served warm and was fine, but missing something – like a dressing that was more assertive with a bit of acid, such as in a touch of lime juice or some lively herbs, such as dill or fresh basil, mixed in with the semoule. 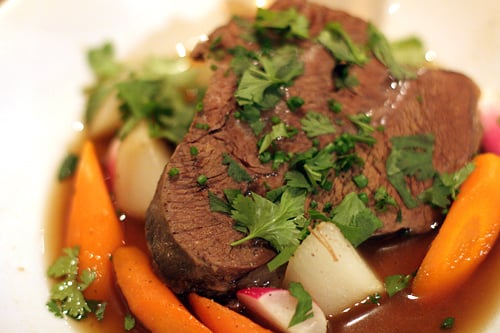 I was excited to have the Canard Colvert rôti, roasted duck, (which I love) since the neighboring table was also having that. But unfortunately just after I ordered it, the server came back from the kitchen to let me know that they had run out of it. I was tempted by the Grouse with foie gras, beets, and celery root purée, but I switched to the Joue de boeuf braisée which came with crunchy, very lightly cooked radishes and carrots, which was very good, although someday, fresh horseradish will arrive in Paris and braised beef will be a better dish for it. 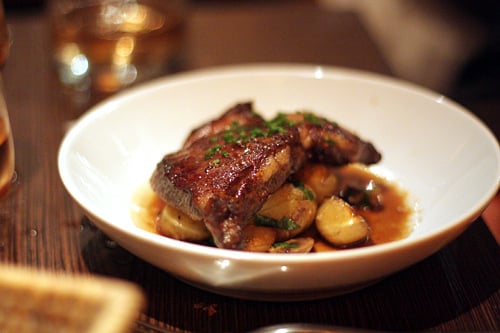 Two of my dining companions had the Entrecôte épaisse (thick steak) with grenaille (potatoes) and mushrooms, which they admitted to be very good, and my other pals had the salmon, which had to be substituted when they ran out of the pavé of cod with cocos de Paimpol, or fresh shelling beans.

(I know some people get miffed when restaurants run out of dishes, but to me, that’s always a sign that they are buying fresh ingredients and rotating things properly.) 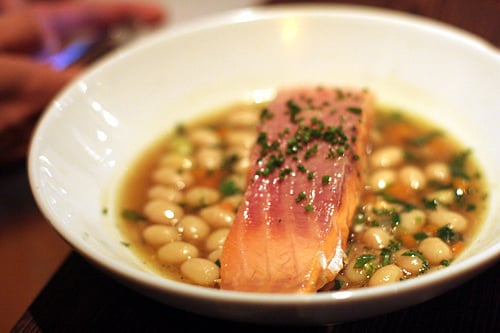 No one at the table wanted dessert. Except, of course, me. And I wanted the Bostock with chantilly and glace vanilla, which I convinced one of my dining companions to share. The waiter set down forks for us and we waited for a good fifteen minutes or so, while the rest of the room cleared out. (The terrace, which, judging from the low-hanging cloud out there, was the smoking section, and still hopping.) Finally we flagged a server down and asked about the dessert, and then he told me that they were out of the dessert, too. So we got the check and split. 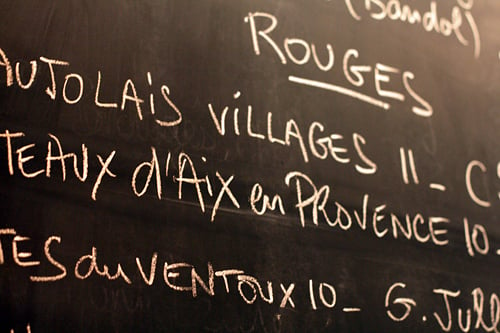 They did take two glasses of wine (€4 ea) off our check (which came to €219 for six), perhaps because of the final oversight. Philo is one of those places that I want to like, in spite of its quirks, which aren’t quite endearing enough to overlook. But because it’s hard to find a reasonably priced modern bistro that uses fresh ingredients, where you don’t need to spend two days on speed-dial trying to snag a reservation at, I will go back, especially because the Canard Colvert that our neighboring table had enjoyed into looked great. But I’ll go with a back-up plan, just in case they don’t. 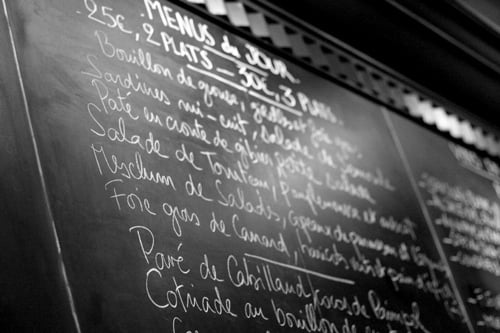 Philou (Not Drinking Poison in Paris)

*Certain main courses, like those with game, have a €10 surcharge in addition to the “menu du jour” price, which – in my opinion – are totally worth it. Certain appetizers also had a surcharge, although not as stiff as other restaurants in Paris of similar quality.