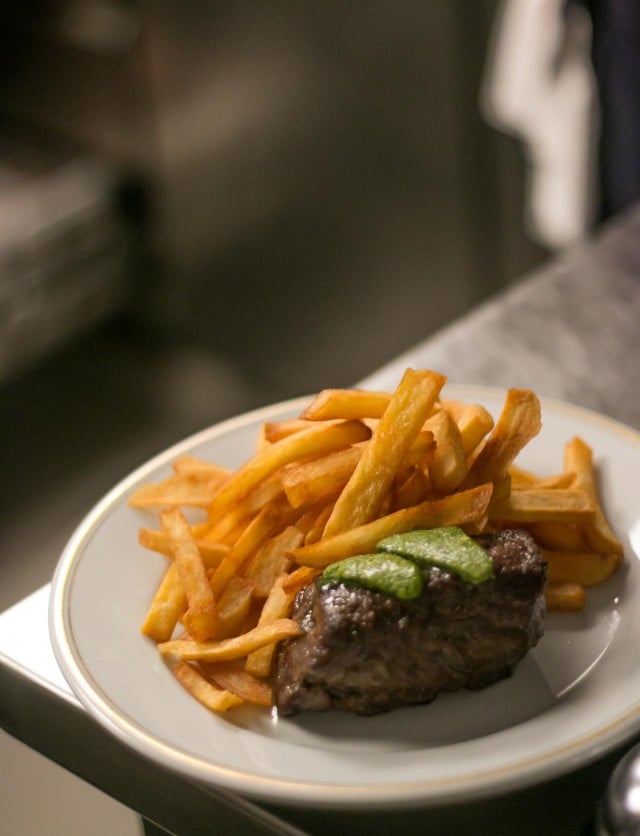 When Daniel Rose opened his first restaurant, Spring, it was a small, seasonally driven restaurant on an unremarkable street in the 9th arrondissement. Word quickly spread about the talented chef, who helped fuel a revolution of younger chefs in Paris cooking creatively, most of it French-inspired, but with an additional focus on sourcing the finest seasonal fruits, vegetables, fish and meats.

As an American, Daniel didn’t have fixed ideas about how things should be, and used ingredients that were decidedly French – part of a now full-blown movement in Paris amongst a younger generation of chefs, who are putting more vegetables forward on their menus, accenting plates with unexpected seasonings, using less sauces, and lightening up plates, which eventually became part of an international conversation about the current and future state of French cuisine.

Most of these smaller places are packed, but Daniel made a big move and took Spring to another neighborhood, offering more intricate menus than he had been making before. (He is also re-opening the nearby Chez La Vieille in Paris, and opening another in New York.) Spring restaurant had been a success in its spiffier incarnation, but Daniel Rose decided to take a look back at classic French bistro cooking in his new place, applying the same insistence he’s known for in his other restaurant, on the quality of ingredients and careful preparation of the iconic dishes that many of us know and love. It’s obvious on the menu, and on the plates, that Chef Rose has a deep affection for them too. 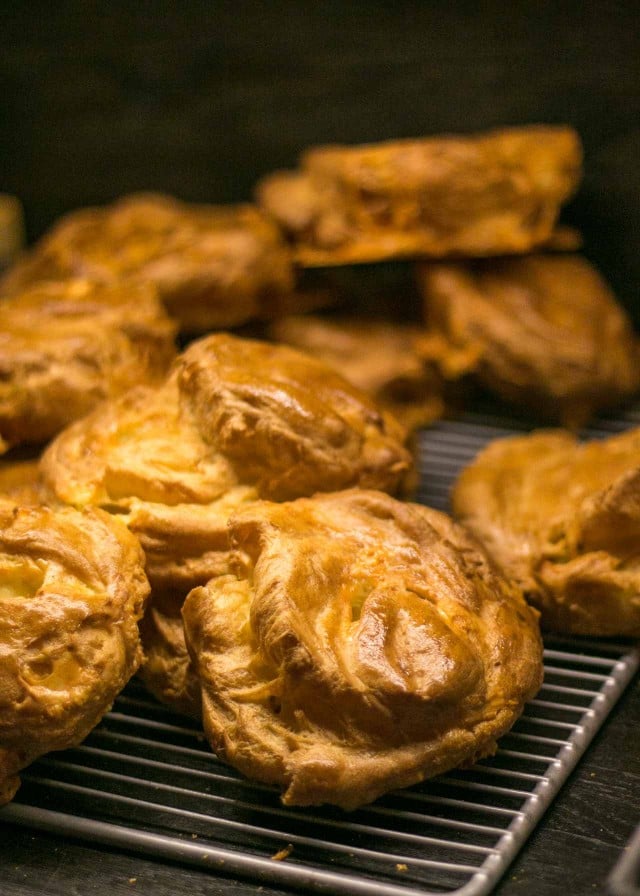 I’ve had a couple of meals at La Bourse et La Vie, a name which is a riff on the expression, “Your wallet or your life.” (Readers of The Sweet Life in Paris will recall my confusion over le bourse, which also means scrotum in French.) And I would certainly give up either (although I will hold on to my own bourse, thank you very much…) for another one of the marvelous gougères brought to the table shortly after you sit down. The golden brown, crispy cheese puffs are huge, like the ones you get at bakeries in Chablis. They arrive sliced in half, which is a good thing, because if I had my own, I would probably not had room for dinner afterwards. 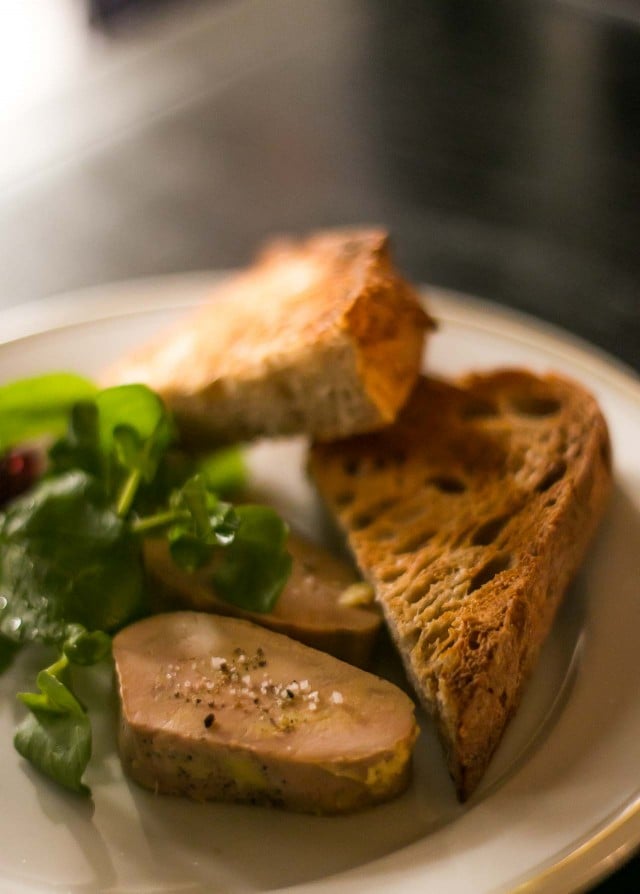 Order the Foie gras with onion jam and you’ll be presented with several massive slabs of duck liver with warm toast and a flurry of flaky French sea salt and pepper over the top, which is all foie gras really needs. 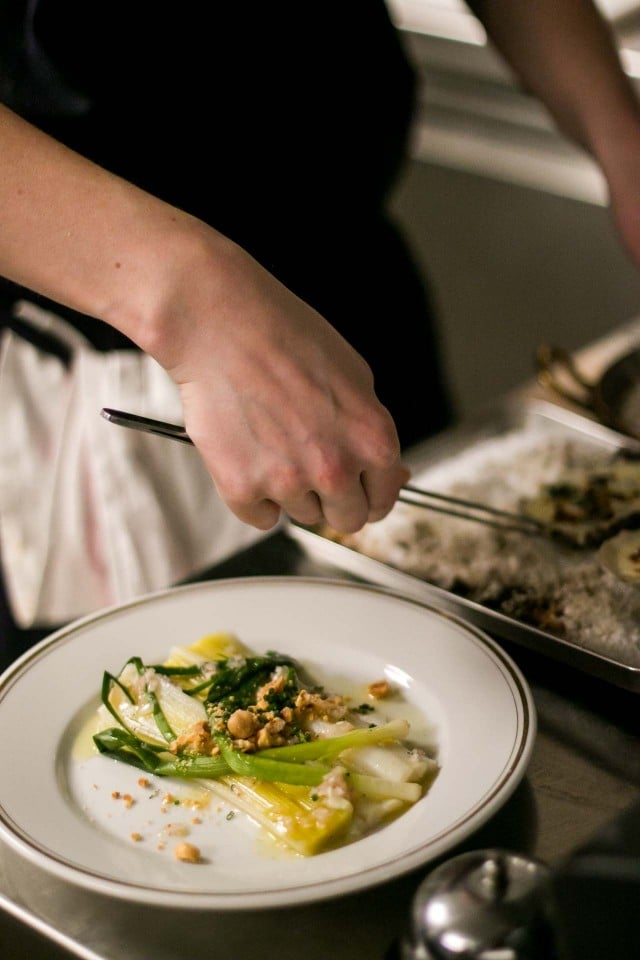 Poireaux vinaigrette is a lovely plate of baby leeks topped with roasted hazelnuts from Piedmont (Italy), widely considered the best of their genre. And I agree. Some of you know the reproach I got for adding some bacon to my leeks vinaigrette at him, which “someone” eventually came around to, hazelnuts are something I’m going to try the next time. 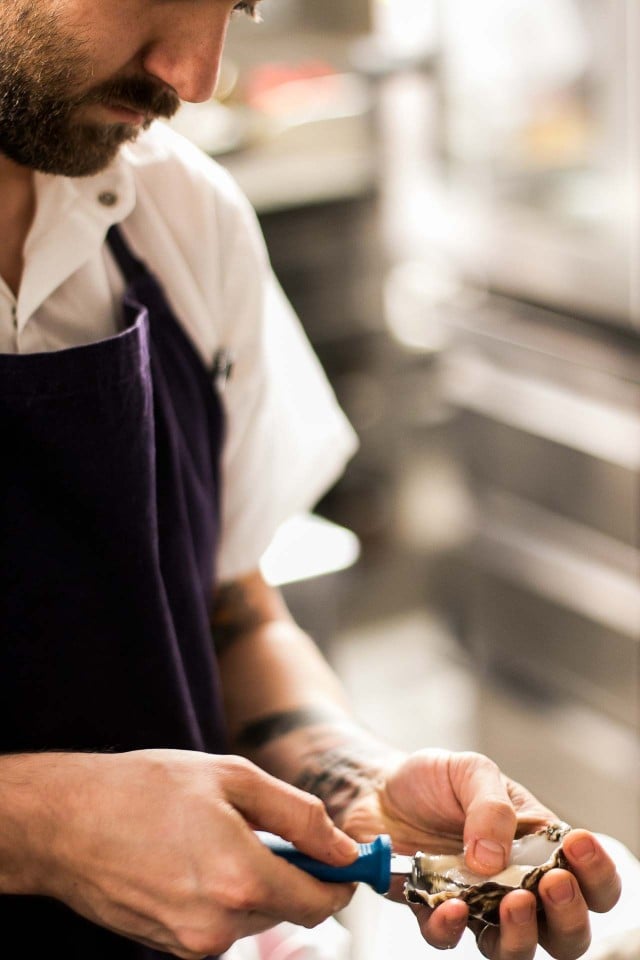 But probably the killer app in the appetizer department are the Huîtres gratinées, a trio of oysters topped with a ridiculously unctuous dollop of Normandy cream, then baked on a bed of salt, just until browned and bubbly. 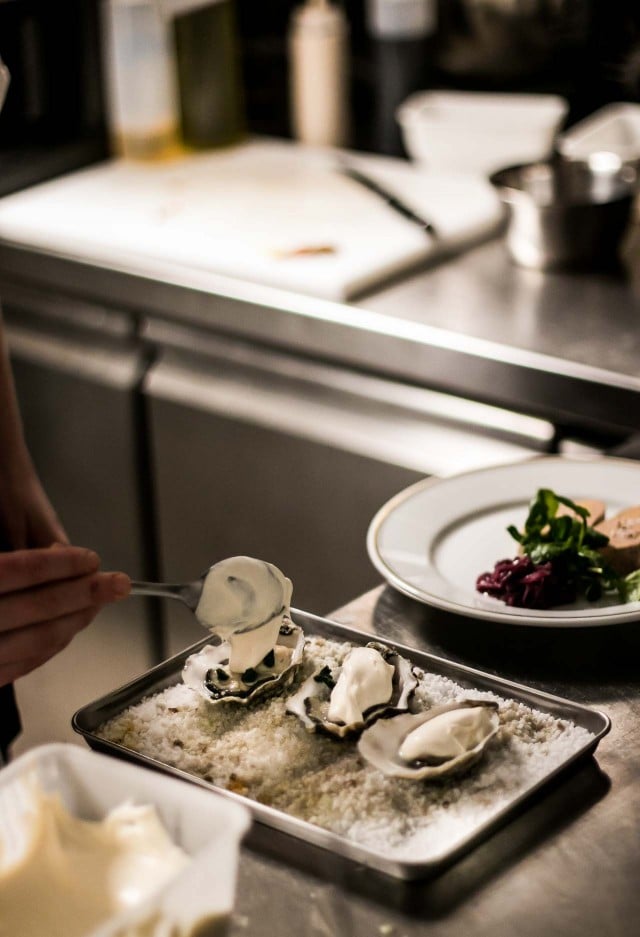 I had them on my first visit and loved them so much that I told a friend’s elderly French mother about them. She hails from Brittany, and was stunned when she heard that people cooked fresh oysters. (And with crème fraîche, too?!) I also love oysters crues. But the quick-cooking ensured that the oysters here remained juicy and briny underneath the blanket of thick, fresh cream, which melded perfectly with the salty bivalves nestled below…waiting to be spooned up…which I happily did. 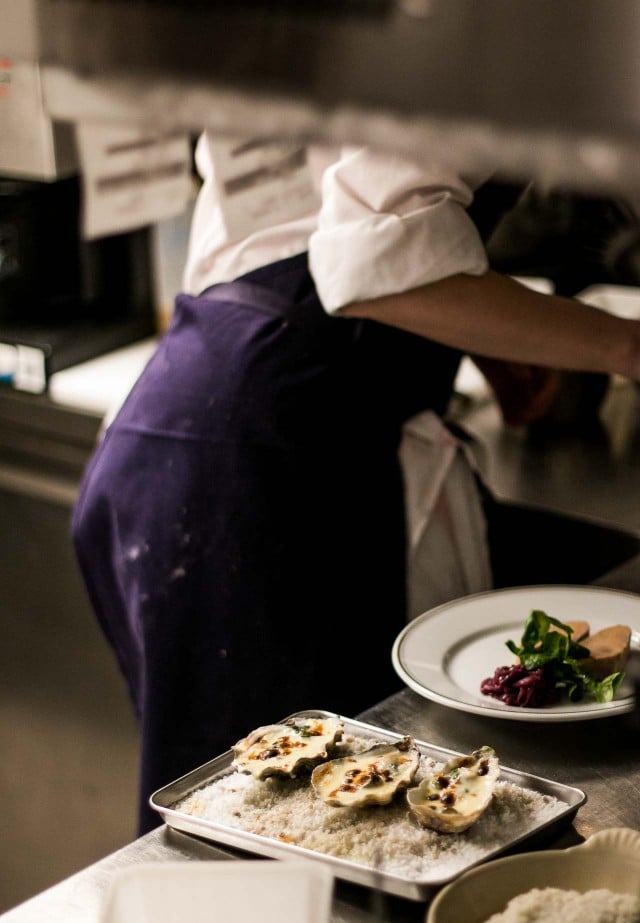 On my first visit I had the Pot-au-feu, the French classic, whose English translation – boiled beef dinner – doesn’t quite do it justice. (That’s not a literal translation of the words, but that’s the dish in English.) The French version is often served in courses, with a bowl of broth to start. Then out comes the meat along with condiments like Dijon mustard, cornichons, coarse salt and horseradish alongside, and you’re welcome to pick out the pieces of tender beef and vegetables, as you wish.

At La Bourse et La Vie, the Pot-au-feu comes out in a well-used copper pot and is lightened and brightened up with a flurry of fresh herbs, a clever touch that you won’t find in a stodgy bistro. Because the dish came from humble beginnings, it usually includes a beef bone, served with a narrow spoon to dig out the jelly-like marrow. 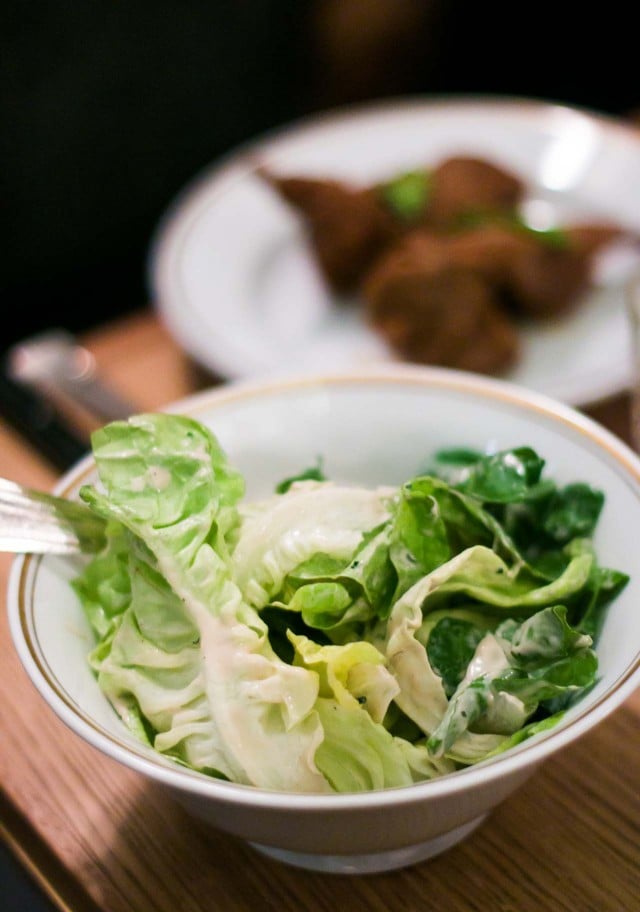 I loved this dish and would order it again. (And again and again.) In fact, last night I had dinner with a friend and when we were talking about this restaurant, we both agreed that the Pot-au-feu was the dish to have. I did try a fried quail with buckwheat that was on the menu, on a subsequent visit, that were pieces of deep-fried quail which had been dipped in a buckwheat batter (Caille frite au sarrasin), which arrived as being more of a riff on fried chicken, which is one of my favorite things on the planet, than something you’d find in a bistro. I wasn’t quite expecting it and spent my time trying to sneak tastes of Romain’s Pot-au-feu, which I’d urged him to order, and was one of the few times a panful of meat was lighter than a plate of quail.

It’s hard for people to imagine a bistro without Steak-frites and it’s something even the corner tabac would have on its menu. When done right – with good beef and a pile of freshly made French fries cooked until crisp, it’s one of my favorite dishes. 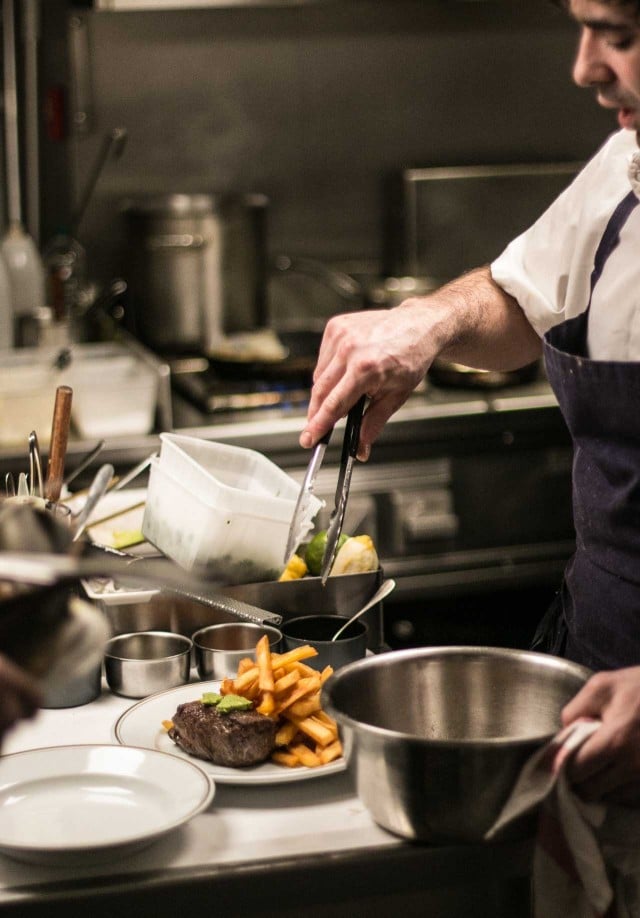 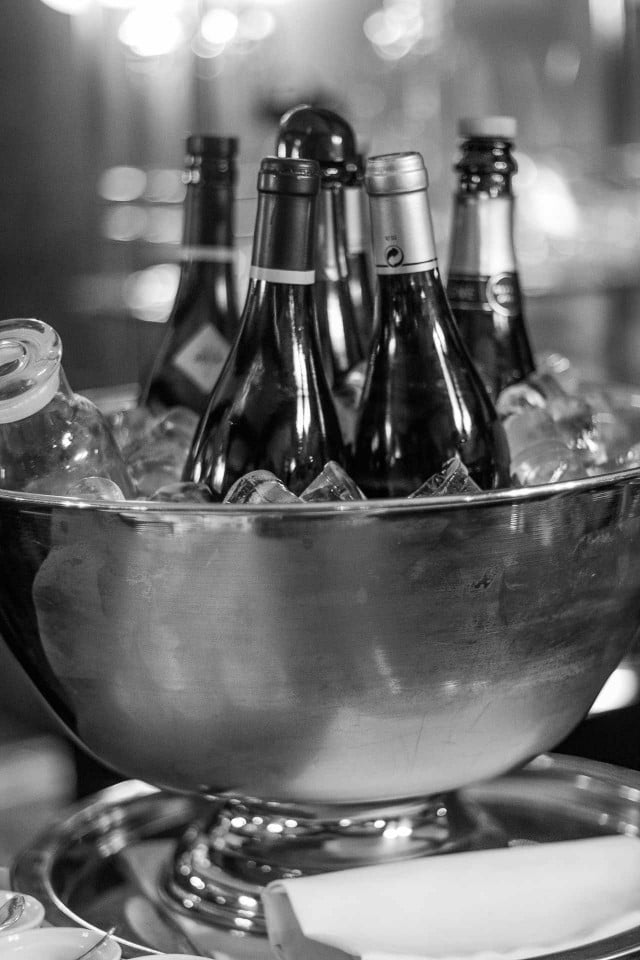 On the initial visit, a group of friends and I had reservations for the second seating and I am pretty sure we were the only Americans in the place. (Even though two of us live here.) The second time I was at the first seating dining with Romain, and he was in the minority. I like a mix of people and it’s encouraging to see people traveling who like to eat well, since I’m one of those kinds of travelers myself.

The restaurant is compact, so that no matter where you sit, you’ll likely strike up a conversation with some of your neighbors, like we did. For those who want to “live like a local,” you might want to reserve a table for later if you’re so inclined. And due to the small size of the restaurant, it’s highly recommended that you reserve in advance. 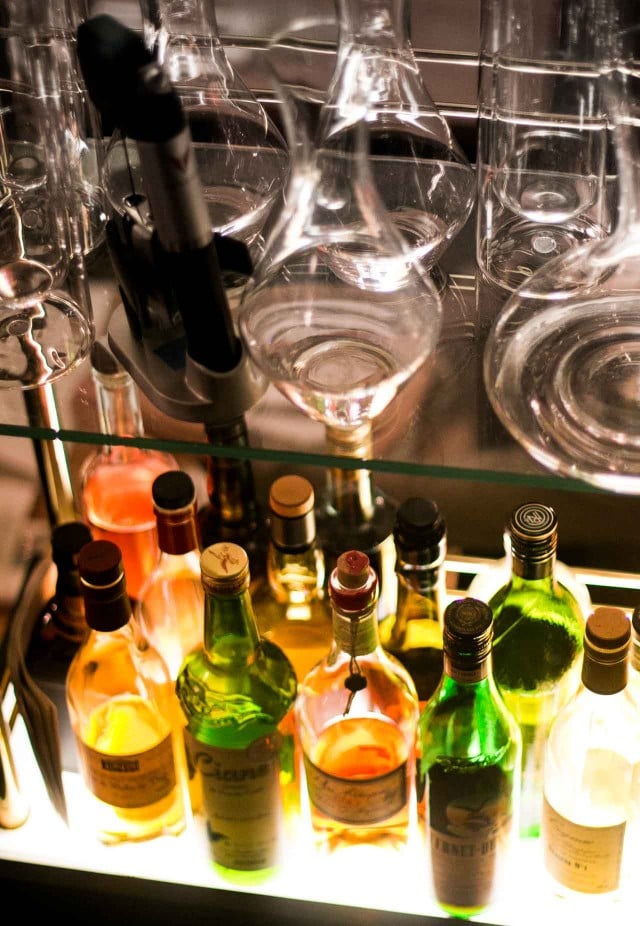 I am an unabashed fan of simple French desserts, and Crème caramel is at the very top of that list. When dining with my small group of friends, one owns a great restaurant in the United States, and she’s a terrific baker, too. We both agreed that this was one of the best versions of crème caramel that we’ve had.

I later learned that a touch of cream added to the custard brings it to the top, along with vanilla seeds, a twist that you don’t find in France. (I worked for a while in a Mexican restaurant in California and my co-workers were surprised when I added vanilla to my flan, so that addition may be an American addition?) I dunno, but it works with the cool custard and even though I was supposed to be sharing mine, I secretly wish I had ordered one that I could have spooned up all by myself. 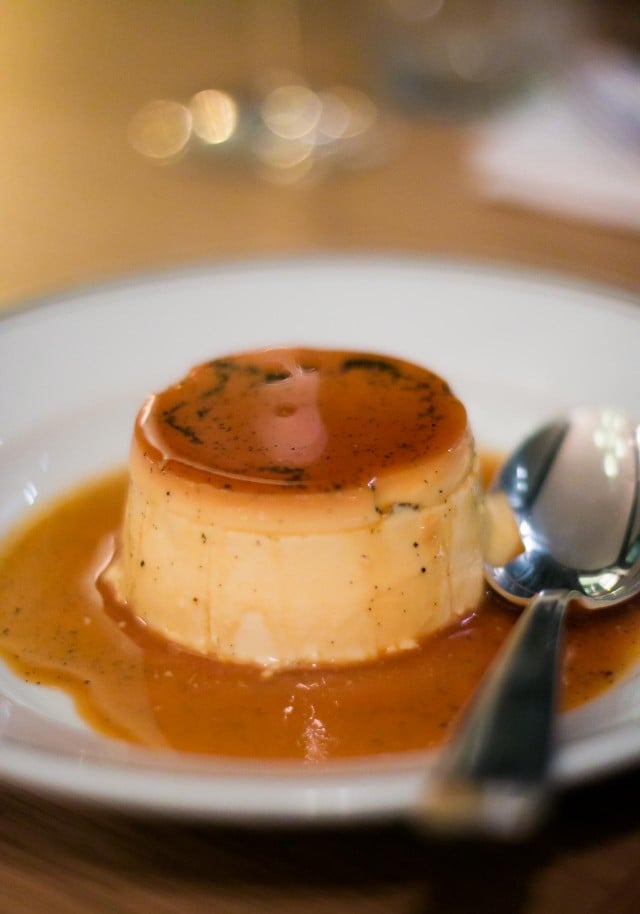 Note: Since writing this review, prices have gone up in recent years. Check their website for the current menu and prices.