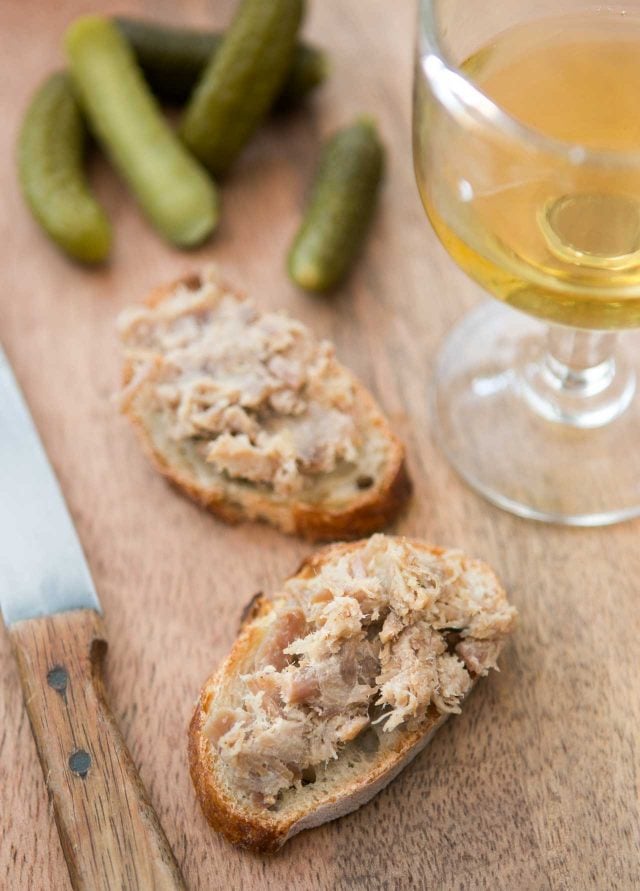 Rillettes is a funny word. It always sounds like a card game – “Care to play a few rounds of rillettes?” I never figured out how this spreadable cornerstone of the charcuterie world got its name, but I’m sure some etymologists out there might have some insight to share?

In the meantime, I’ve been enjoying being back in the kitchen. After sweating over my next book, a memoir with recipes, I’m excited (and so are my eyes) to step away from the computer, after scanning pages and paragraphs, checking French verb tenses, and verifying timelines of events, to get all the details right. Thankfully there are just a few more passes (lookovers) and now I have more time to spend back into the kitchen. 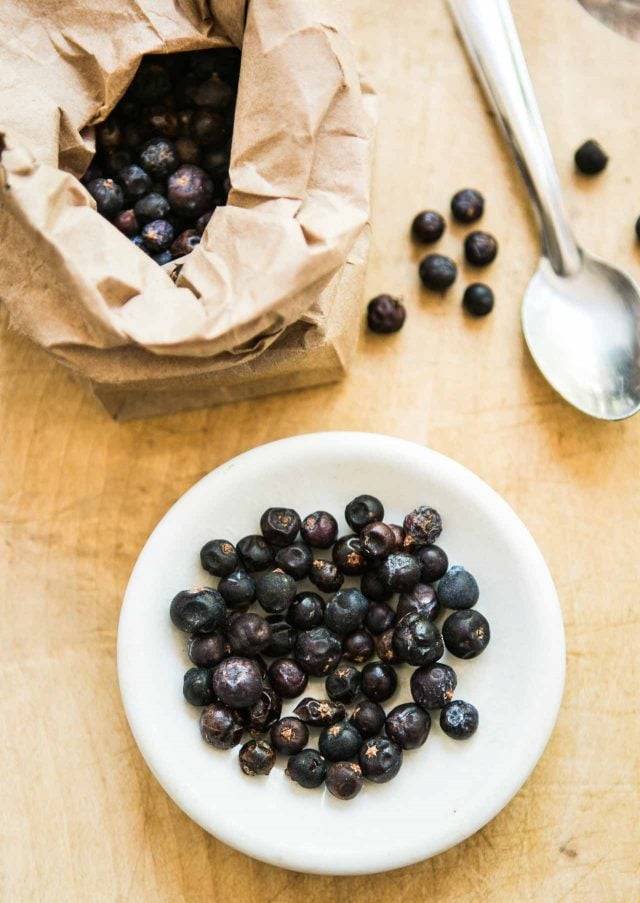 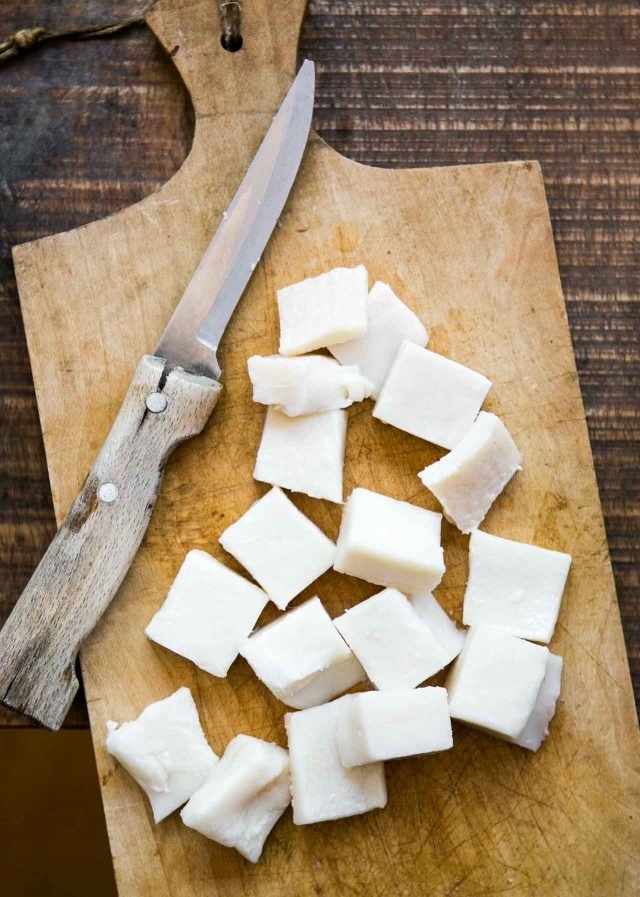 I can also get cracking on the lovely stack of recent cookbooks that came out this year. One that I was particularly interested in was La Vie Rustic: Cooking and Living in the French Style, the newest book from Georgeanne Brennan. Georgeanne has written a number of cookbooks during the last few decades on French cuisine. I’ve cooked from many of them over the years and always enjoyed her more rustic (or rustique?) take on French food.

Georgeanne lives most of the year in San Francisco but has French roots. Her husband is French, as is her son-in-law. And her daughter helped style My Paris Kitchen. So it’s like we’re one big happy family, with deep roots in both cultures and countries. 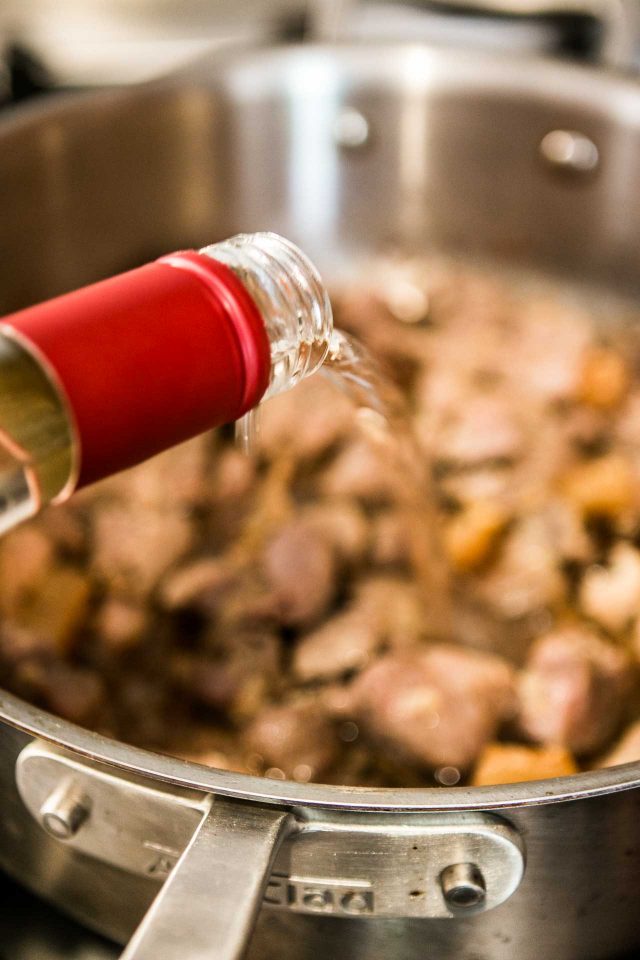 Speaking of family, traveling recently in the U.S., I engaged in one of my favorite activities: Prowling around the markets, butcher shops, and supermarkets, to see what’s available, and what might be the U.S.-equivalent to French products, so I know more about them when I write up recipes.

Meat tends to be especially vexing because the cuts of meat in France don’t necessarily correspond to those in the States. Perplexed visitors who dine out in France often are confused by onglet, palette, and sot l’y laisse, the “oyster” on poultry, known as “the part the idiot leaves behind,” in French. (Which admittedly is less confusing than calling a poultry part an oyster.) 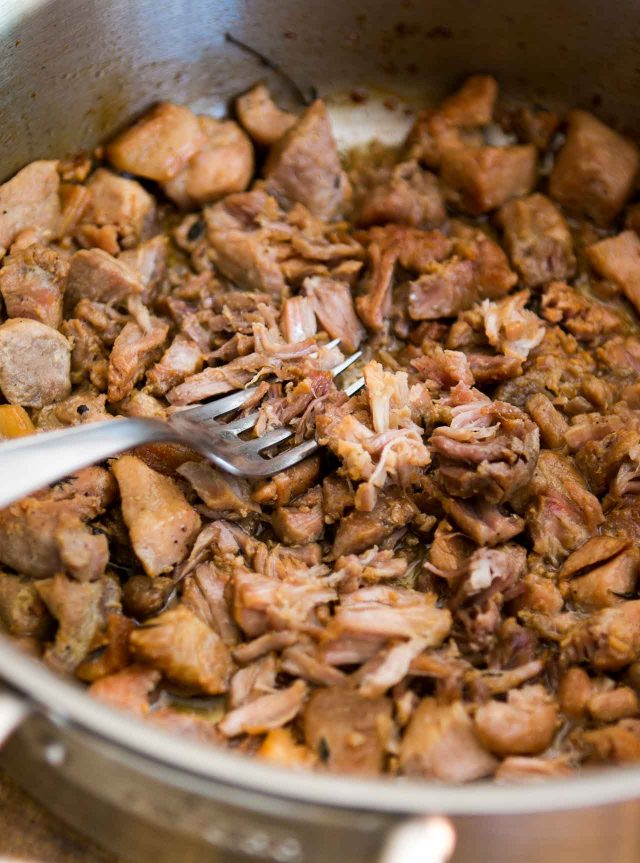 Tackling this recipe, I had to figure out the French equivalent of fatback, which Georgeanne calls for in the book, for making the rillettes. I asked my friend Kate Hill, who teaches charcuterie-making in Gascony, and she told me that fatback is the firmest fat in the animal. I tried that the first time I made this and it barely gave up any of its fat when I cooked it. So I tried it again with the slightly softer fat from the pig jowl or belly, which a local butcher hooked me up with. 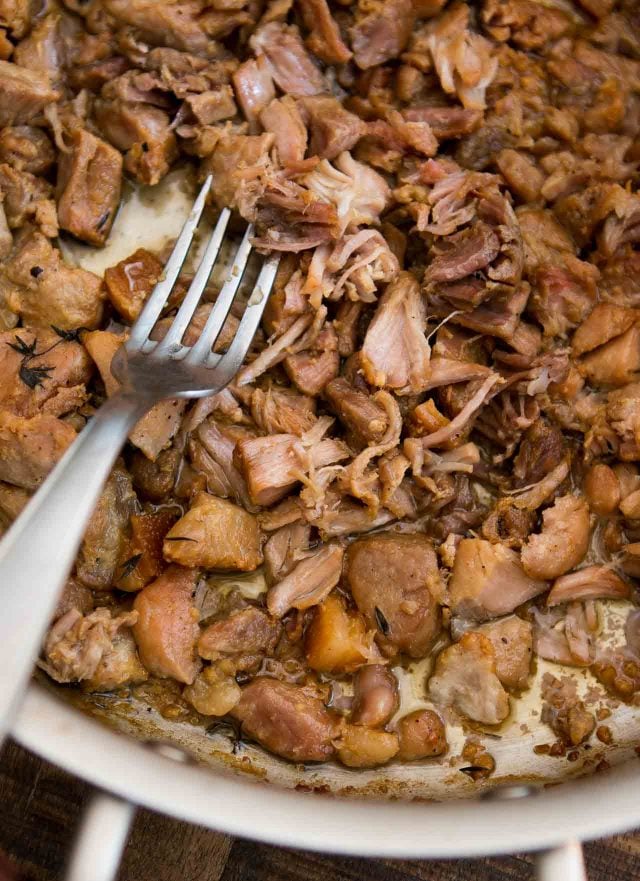 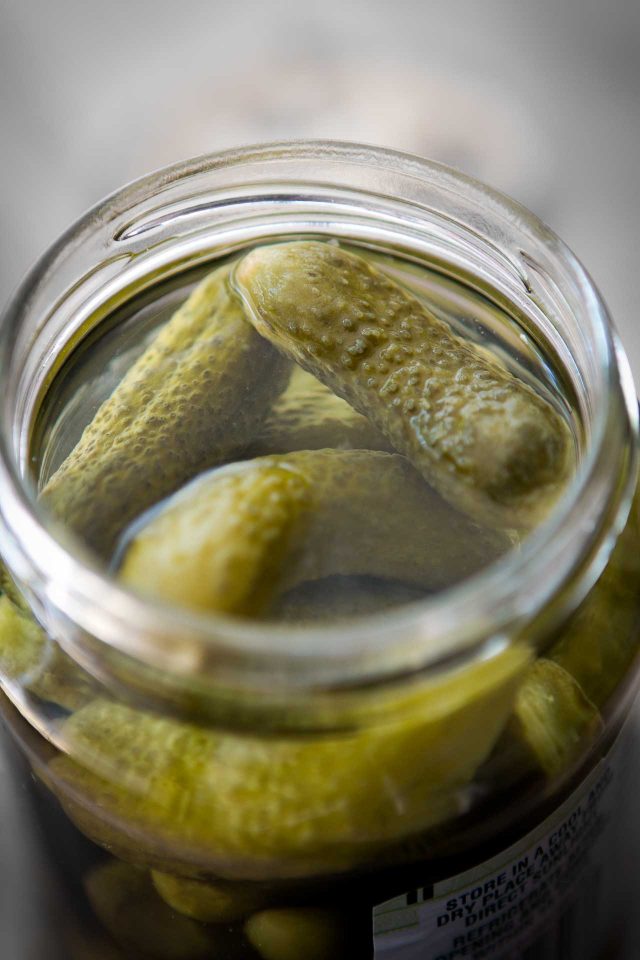 So you might need to go to a butcher and ask for belly fat, rather than soft fat, which is lard in English, not to be confused with French lard, which is what we would call bacon in the States. Sorry to be so confusing, but at least you get a glimpse of what it’s like to translate all this stuff between two cultures! (And which makes writing about it all a little overwhelming at times.) But at least you know that if you go to France and order a chicken or pork with lard, it’ll come with bacon, not slathered in pork fat.

Which reminds me of the time way back in the 1990’s when, on a visit to Paris, I ordered cassoulette, which turned out to be a big, heaping bowl of steaming tripe that the waiter presented to me, rather than the cassoulet I thought I was ordering. The upside is that I’ll never make that mistake again. 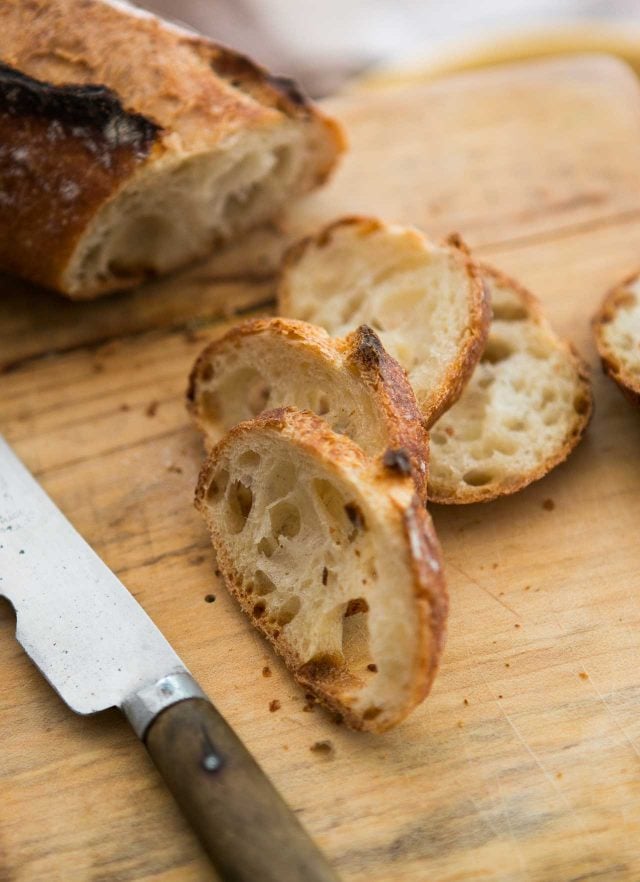 Both Kate and Georgeanne (and I) agree that making rillettes requires a little bit of intuition and making adjustments based on ingredients. Artisanally raised pork will throw off a different amount of liquid (water and/or fat) than its industrially raised counterpart, and I found myself wrist deep in pork trying to figure it out. 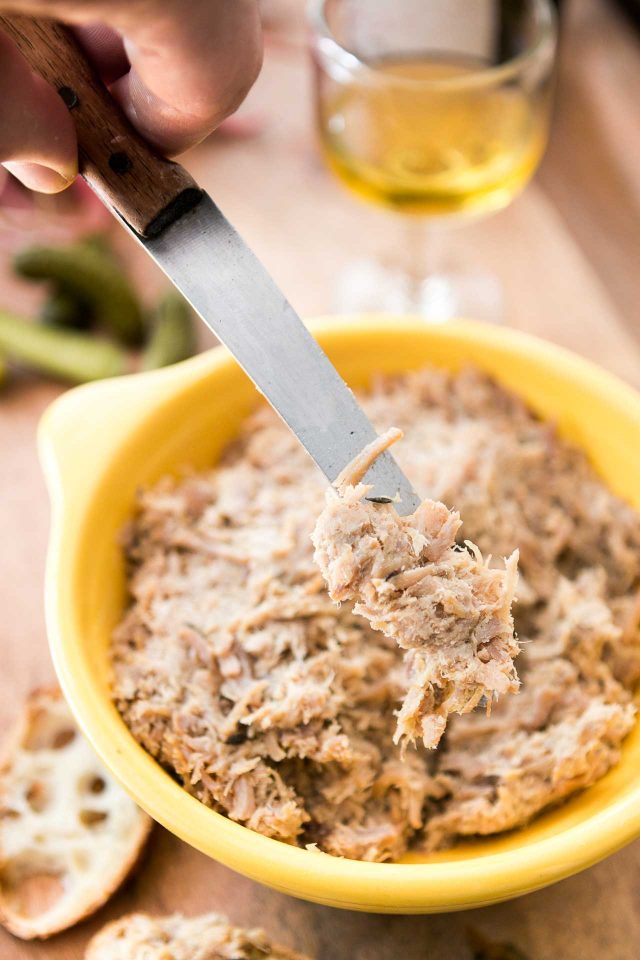 My conclusion is that it’s best to just follow the base recipe that I give, draining off most of the fat, then adding back what you need. The result is a meaty spread that’s great on a baguette along with some cornichons, or smeared on a baguette for a hardy sandwich. 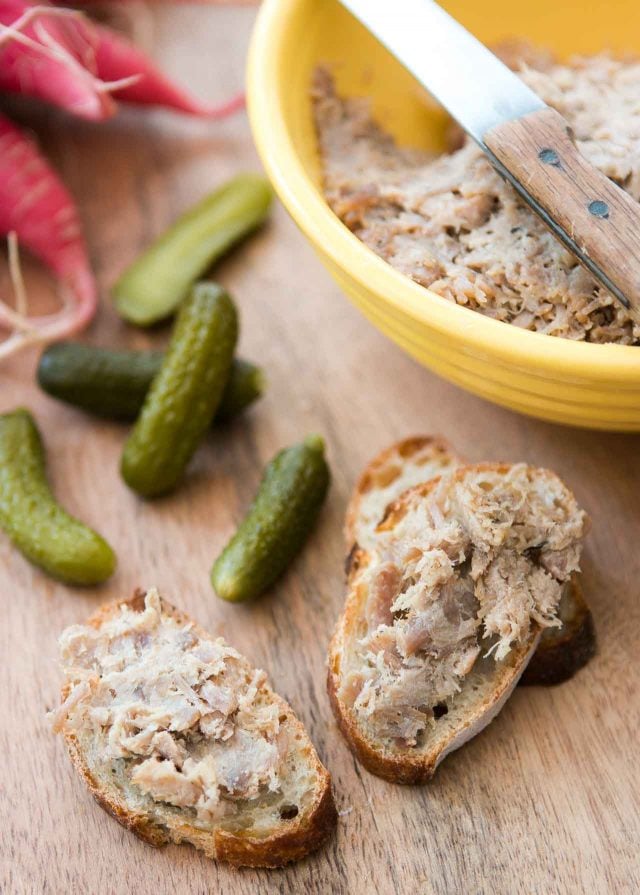 Adapted from La Vie Rustic by Georgeanne Brennan Feel free to adjust the seasonings. The juniper berries lend a nice flavor, but may be hard to track down, so they can be omitted. I like allspice so I added that. Bay leaf or shallots can be cooked with the pork, if you wish. I chose to add some thyme branches. If you're avoiding alcohol you can use apple cider with a squirt of lemon in place of the brandy or whiskey, and the wine. Note: The original recipe in La Vie Rustic noted that after the pork shoulder is cooked, in step 6, to drain the pork shoulder in a mesh sieve set over a bowl to collect the juices and fat, then shred the meat and set it aside. When the liquid cools and the fat separates, warm the juices in a pan with the shredded pieces of pork shoulder, adding 2 - 4 tablespoons of fat, to make it spreadable. I didn't get any liquid when I made it either time I made it, but if you end up with liquid, you can follow those directions.
Servings 6 servings

Serving and Storage: Serve at room temperature. Rillettes will keep in the refrigerator for one week to ten days. I don't recommend freezing them as charcuterie tends to get soggy, if frozen and defrosted. 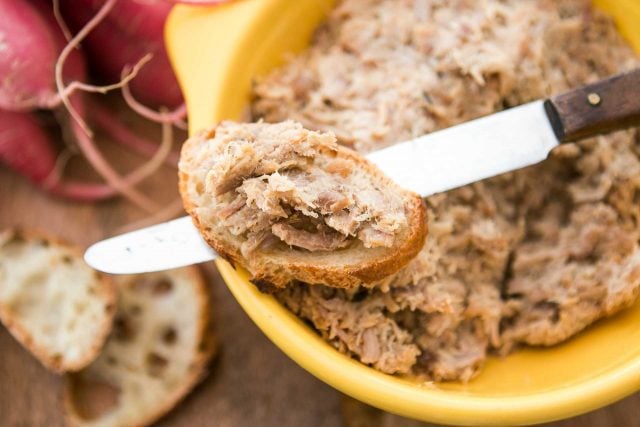